A very heavy and noisy rainstorm greeted us as we woke this morning but by the time we fiinished breakfast and packed our luggage into the bus the thunderstorm passed over and a patchy blue sky appeared.

We transferred from Coto Donana to Extremadura and spent the day doing so, making several birding stops and a long coffee stop. Having seen about 20 species from the bus during the journey (nothing new) we began our first birding at Alange Dam just south of Merida. The rain had stopped for a while but we could see dark clouds in the distance heading our way. 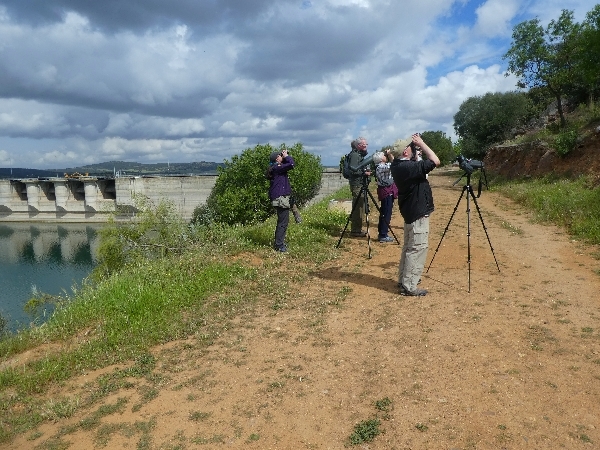 Birding near the Alange Dam

The dam provides a home for a huge Alpine Swift colony, dozens were in view as we approached, along with Jackdaws and Spotless Starlings. We parked in the car park just below a large pinnacle of rock next to the dam. Serins and Goldfinches zipped around us as we began a short walk whilst scanning the huge rock-face above us. Within ten minutes our three target species were on the list! Rock Bunting, Black Wheatear and Blue Rock Thrush were all found relatively easily albeit quite high up and we had to use our scopes for a decent view.

Out on the water sat a single Egyptian Goose, this species has now colonised Spain and breeds on several lagunas  and embalses in Extremadura. Gull-billed Terns circled over the water and above us there was always a raptor or two drifting by, we noted Griffon Vulture, Black Kite and two very distant birds that were probably Bonelli’s Eagles. 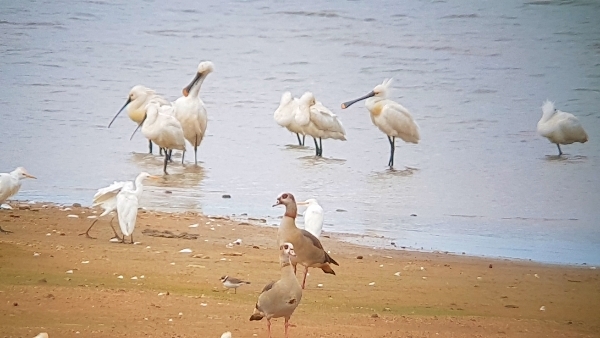 We walked a short way to view the ‘dry’ side of the dam where we had much better views of Alpine Swifts, Crag Matins and a superb male Rock Bunting.

After driving into the town of Alange we had lunch before continuing our journey towards Trujillo. Our next stop was Merida, the old Roman town steeped in history and historical and important archaeological sites.  We parked near the Roman Bridge and scanned the river Guadiana. This is a well known site for many species including Penduline Tit, we quickly found a pair of Common Kingfisher, more Egyptian Geese, also Glossy Ibis, lots of egrets, herons and waterfowl.

We walked ontoi the Roman Bridge heading towards town and stopped at an area that had a good vantage point looking over the reed-beds and scrub. We then found a male Penduline Tit, it was calling and bust into song a couple of times, everyone had great views of it, off went the cameras clickety, click. 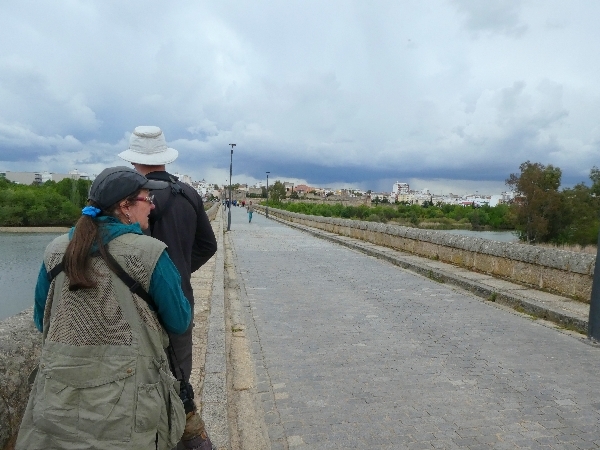 On the Roman Bridge at Merida

From the bridge we also saw another Common Kingfisher, a Little Bittern, some Night Herons and a huge colony of Cattle Egrets. Great Cormorants, Glossy Ibis, Grey Heron and many egrets dashed about up and down the river, it was an amazing place, but we had to leave to continue our journey. 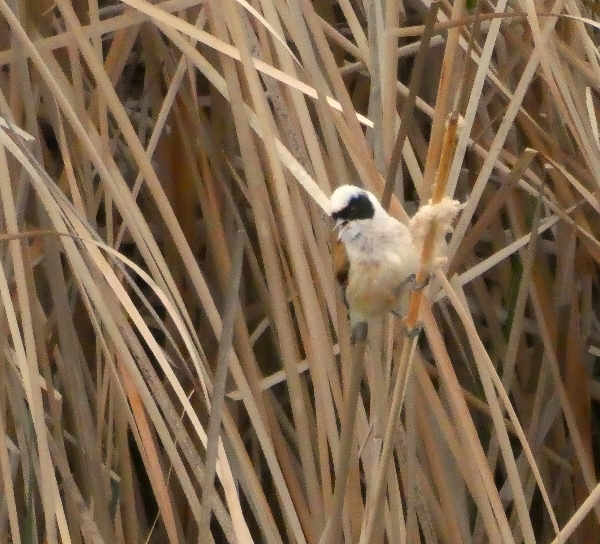 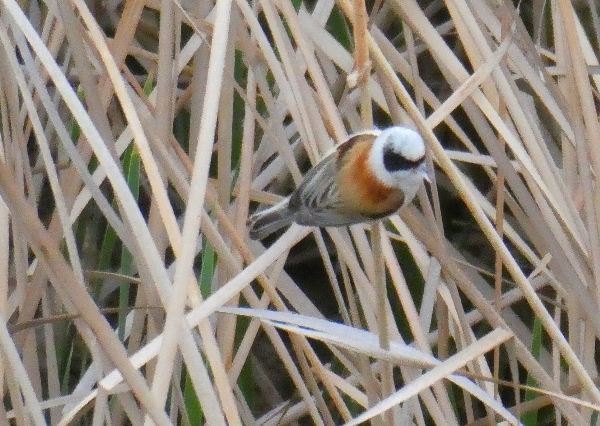 Our last stop was an area south of Trujillo at a conservation nature reserve called la Moheda, this area is protected for wintering Cranes. A huge swathe of Dehesa and a massive man-made reservoir are found on the reserve. We parked up, having driven through a series of rain showers, we could see a huge thunderstorm in the distance and it did not bode well.

Despite the threat of the oncoming thunderstorm we continued our birding by walking up the man-made bank to view the reservoir. Many birds were out there, we could see several islands that held a large flock of Cattle Egrets, a pair of Egyptian Geese, some Eurasian Spoonbills and Black-winged Stilts. Smaller waders ran around feeding on the sandy shorelines, we saw Greater and Little Ringed Plovers, Kentish Plover, a few Dunlin and a dozen or more Little Stints. Common Sandpipers fed further afield and to our great delight we found 9 Collared Pratincoles, they were distant but perfectly viewable in the scope. 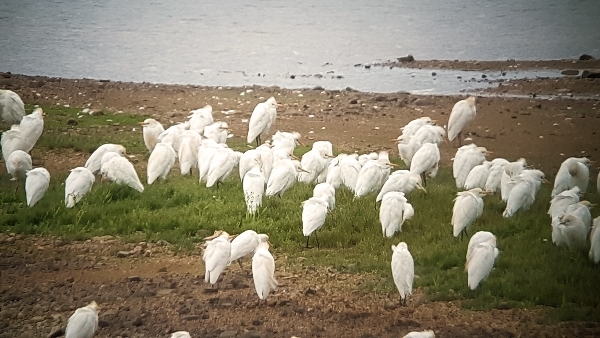 a bunch of Cattle Egrets at La Moheda

On the water a single Gadwall and a dozen Mallards drifted around and not much else was seen. As we walked back to the car we watched a flock of European Bee-eaters, they looked particularly colourful sitting in a dead tree, lit by afternoon sunlight with a very dark sky behind them.

It took another 40 minutes to drive to our next accommodation, Finca Santa Marta which is found just south of Trujillo. This enchanting place engulfed us as discovered our new environment. I love the smell of Jasmine and at this place it oozes from the ancient walls, the whole place is simply magical.

After a cup of tea with biscuits and a short time to settle in, we went for walk along one of the many tracks around the main buildings. Not many birds were about but it was nice to get outside away from the bus. We ate at 8pm and enjoyed a superb meal.