As our minibus had broken down yesterday and our replacement bus was not due to arrive until lunchtime we were without transport for this morning so we booked a taxi to take us round to Belen Plain. It was bitter cold when we arrived just after 8am the wind was directly in our faces as we walked but surprisingly there was lots birds around us.

We notched up our first Thekla Lark of the trip and the number of Corn Buntings and Calandra Larks was staggering they were everywhere. We scanned the open grasslands for Bustards noting a variety of other species in the process, Eurasian Hoopoes sat on fence posts, our first Little Owl sat on a derelict building, Stonechats, Whinchats, Crested Larks, Greater Short-toed Larks, Northern Wheatears and Goldfinches were all noted over the next hour.

Vultures had a constant presence both In the sky or perched on rocks, we scoped both Black and Griffon Vultures on the ground, there was also lots of Black Kites a couple of Red Kites, Common Buzzard, Short-toed Eagle and several Montagu’s Harrier sightings.

At last Bustard sightings came, albeit very distant ones and very few. A male Great Bustard was displaying to a single female, performing a strutting dance routine with all of his white feathers on show, he looked like a walking cushion with all of its stuffing hanging out, I hope he impressed the girl! 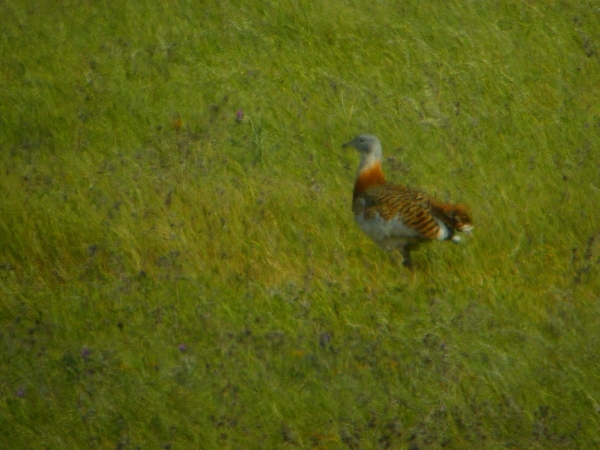 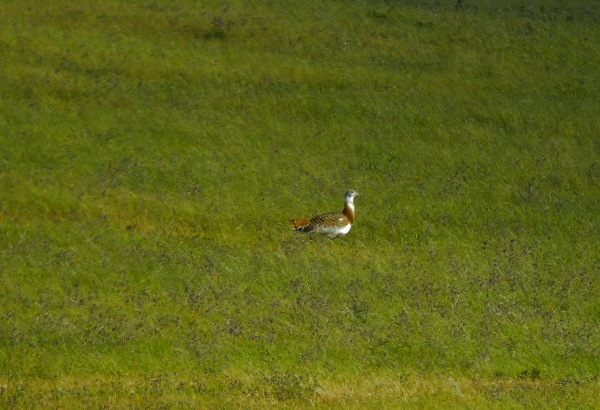 Our walked continued along the lane, it rose to a peak giving us fantastic panoramic views of grass meadows that stretched to the horizon. A couple of male Little Bustard were finally tracked down, they too were displaying, they would ruffle up all their feather, flap their wings and jump up a couple feet out of the grass. Maybe it was the wind but Little Bustard sightings were very few and I know that there is a growing concern for the Little Bustard population in this area.

Our search for Great Spotted Cuckoo went unrewarded, we added European Bee-eater, Spotless Starling, Iberian & Eurasian Magpie, Northern Raven and a Yellow-legged Gull to the day list, one of our last sightings was of a melanistic Montagu’s Harrier, it was a male and appeared to be sooty black all over, you could see some markings but no white rump. 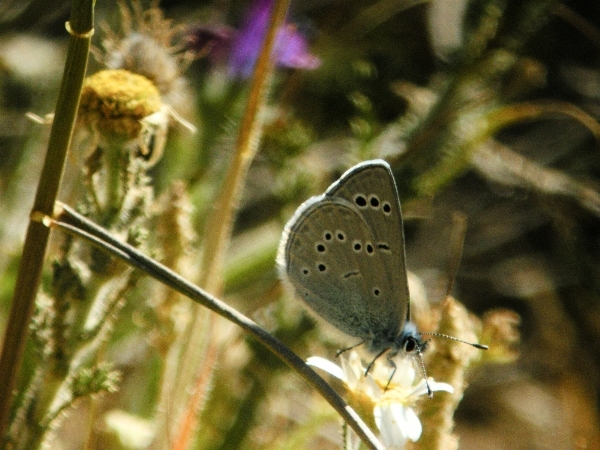 The walk finished after 4 hours and 4 miles, our taxi turned up on time and drove us back to the Finca where we had lunch, our replacement bus arrived just as we got back. 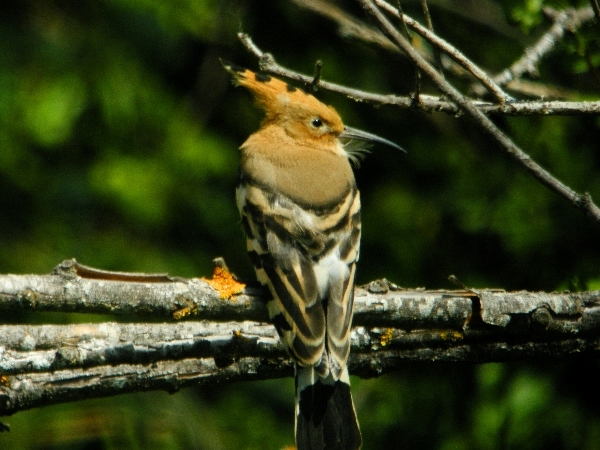 For the afternoon we visited several open plains areas looking for sandgrouse and the mythical-cuckoo. At Santa Marta plains we saw an impressive 19 Great Bustards together and a ‘stooping’ Peregrine Falcon was seen by one of the group just before we left.

The plains near Casares have an area where every telegraph pole has a nesting box attached to it, the boxes are used by both Common and Lesser Kestrels, Jackdaws and European Rollers. We saw all of the above, the Rollers looked fantastic in the afternoon light. As we drove along a lengthy track towards our last destination we stopped to look at a Spanish Imperial Eagle sitting on a nest and not long after we watched a 2nd year Golden Eagle circling above the track. 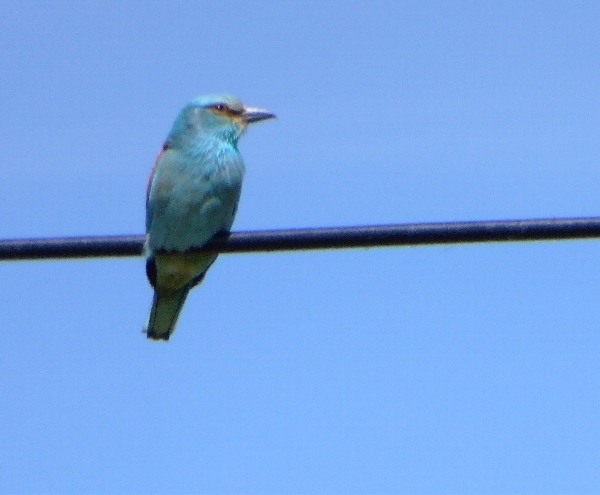 Another area of open plains, that is supposed to be good for sandgrouse can be found near a village called Hinogel, this was our last venue of the day. After searching for 30 minutes from various positions we finally found two Pintail Sandgrouse, unfortunately they were very close to the track on a bend and they didn’t stay too long, we viewed them from the bus before they took off.

We arrived back at the finca at 7pm and sat down for another 4-course,  delicious dinner, I must say the food this year at Finca Santa Marta is excellence and Laura the house-manager is as helpful, funny, charming and entertaining as ever, we have really enjoyed our stay here.