Our first full day was spent at the visitor's centres found on the edge of the national park, we enjoyed a great day out but the species of birds was quite low for this time of the year......

The day started with a thick mist over the town which lifted enough for us to see the laguna behind the hotel, so after breakfast we took a short walk along the promenade to the visitor’s centre.

The water was dead calm and in the mist we could see many birds dotted about, the morning light improved as the mist drifted off. We saw Eurasian Spoonbills, Black-winged Stilts, a single Black-tailed Godwit, lots of Eurasian Coots, Shoveler, Common and Red-crested Pochard, the odd Gadwall and a few Whiskered Terns. In the reeds close by we found Reed Warblers and a Cetti’s Warbler sat out nicely for us. 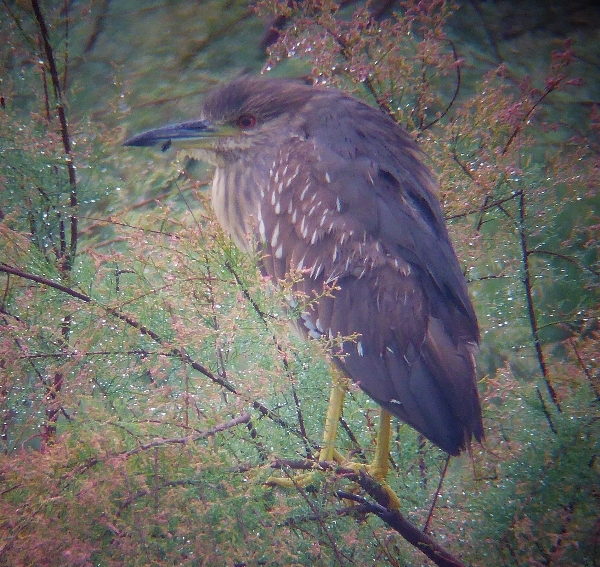 From the visitor’s centre we had great views of roosting Night Herons, we also saw a few Yellow Wagtails and we heard Common Nightingale, a Red Deer fed on the grassy shoreline and a couple of Greater Flamingos fed in the distance with more Spoonbills.

Acebuche was quite disappointing, the large lagunas were completely dry and consequently the numbers of bird species was very low. Of course we enjoyed many sightings of Azure-winged Magpies, Bee-eaters, Hoopoes, a single Golden Oriole but warbler numbers were very low. 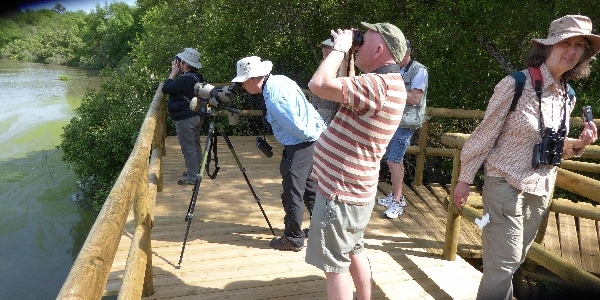 We worked hard for little reward, a couple of Crested Tit sightings, a brief view of a Common Nightingale and several Serins were all we got after an hour’s walk. We gave up at w2 noon and retired to the restaurant where we ate a nice tapas lunch.

From Acebuche we drove to La Rocina which is another visitor’s centre found just outside of El Rocio. From the first hide we could see that the lagunas held water where a number of species were feeding. Common and Red-crested Pochard, Gadwall, Little Grebe, Glossy Ibis, Eurasian Spoonbill, Grey Heron, Whiskered Tern, White Stork, Marsh Harrier and Black Kite were some of the species we encountered. Our walk to the next hide took us across a boardwalk which gave us views of a reed-marsh and it was there that we saw a Savi’s Warbler, the bird ‘buzzed’ constantly whilst we were there and gave great views. 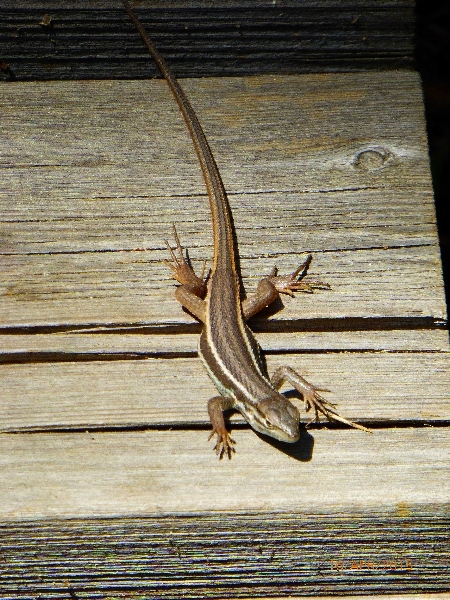 We also heard Iberian Chiffchaff, seen by just two of us and another Crested Tit. On the return journey we heard a distant Common Cuckoo and Sarah in the group imitated the call which brought the cuckoo much closer, the bird flew in a wide circle around us weaving its way through the pine trees, it was amazing. Next we heard a Golden Oriole which also showed well but briefly and it too came closer when Sarah made the Cuckoo call! It was a memorable experience enjoyed by everyone.

From La Rocina we drove to the Palicio de Acebron passing through the heath where a brief ‘stop and search’ resulted in good views of Dartford Warbler. Other birds out on the heath were Stonechat, Woodchat Shrike and Crested Lark. 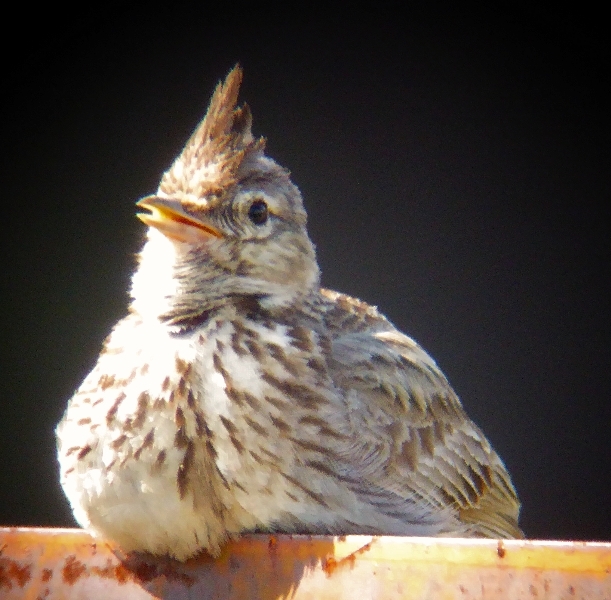 We walked through the deciduous woodland at the Palicio de Acebron hoping for views of Lesser-spotted Woodpecker which we never got, in fact it was fairly quiet. We did see Blackcap, a few common woodland birds and a Wryneck.

Lastly we stopped at the Marisma de Madre just outside of El Rocio, we looked from the old road on the western shoreline. With the sun behind us we had a wonderful vista of the water and El Rocio forming a picturesque background. Not too many species were out there but it was a nice and relaxing birding session. We ate at 7:30pm back at the hotel.