Another superb day on St Mary’s in glorious sunshine and very little wind, with exquisite light throughout the day we had a wonderful time.

A pre-breakfast walk out to Peninnis Head just as it was getting light produced a few sightings but nothing to write home about. Many common garden birds were seen as well as a single Black Redstart, some Meadow Pipits, Linnets and Goldfinches. A Black Redstart around the rocks at the Point was the best sighting, the sunrise was a blend of subtle colours. 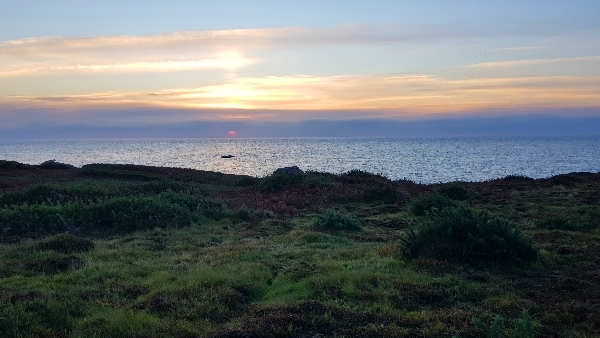 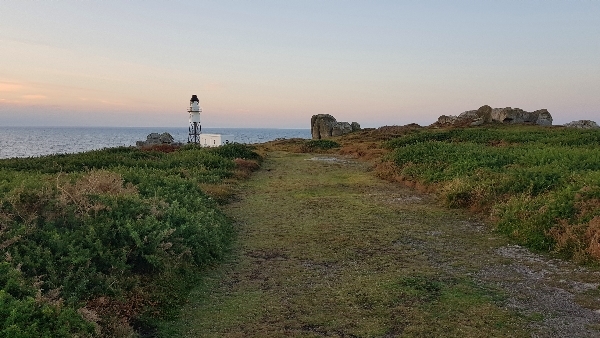 Today was our ‘big walk’ we covered most of the island but we concentrated on the top end, our step-trackers recorded just under 22,00 steps (over 9 miles). We set off to Old Town, at the churchyard entrance a party of 3 Goldcrests worked their way quickly through the trees and were lost to sight. At Old Town we scanned the beach, which was at low tide and  produced a few sightings, Little Egret, Grey Heron, Greenshank, Oystercatcher, Turnstone and a Kingfisher. We saw Rock Pipit, Greenfinch and Cindy got onto a House Martin flying over the churchyard. 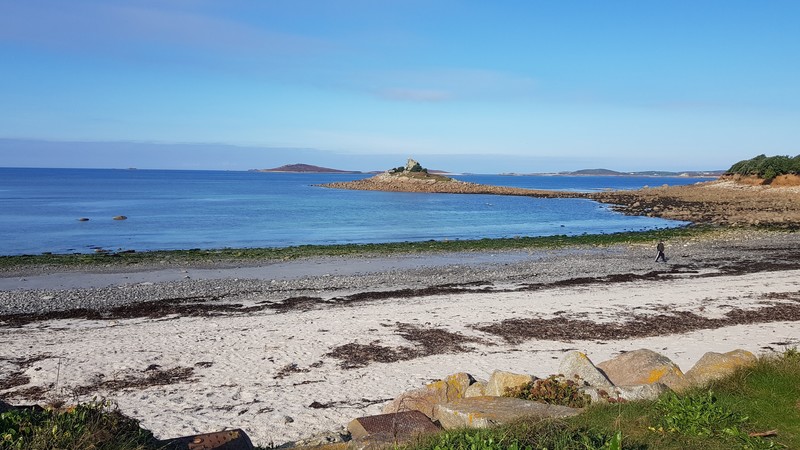 The walk through Lower Moors was punctuated with stops to look and listen, we heard Chiffchaff, Robin and Wren but we also added Blackcap to the list and a fly-over Merlin was an excellent sighting.

The walk from Lower Moors to Porthloo Beach produced very little, but the beach was covered in Sanderling, Oystercatchers and Turnstones. We scanned the rocks on Taylor's Island and found a Curlew with both Cormorant and Shag. At this stage one of the participants, Joe, bailed out for the day. 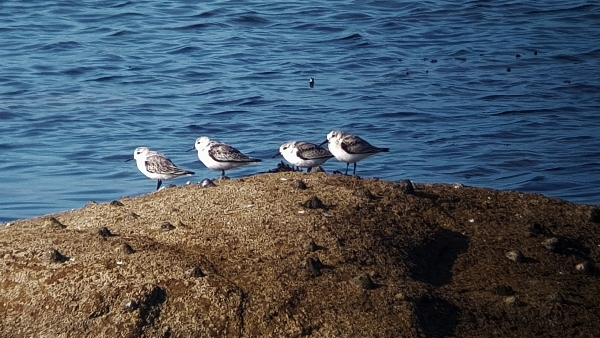 a few Sanderling at Porthloo Beach

We then walked up the hill to the highest point on the island at Telegraph, which is an impressive 51 meters (157 ft) above sea level! Just beyond Telegraph are the ponds at Newford Farm which was our next destination. About 50 people were gathered around one end of the pools looking for and at a DUSKY WARBLER. We joined them and over the next 30 minutes had excellent views of this usually, skulking warbler. It showed very well at times along with a couple of Chiffchaffs. 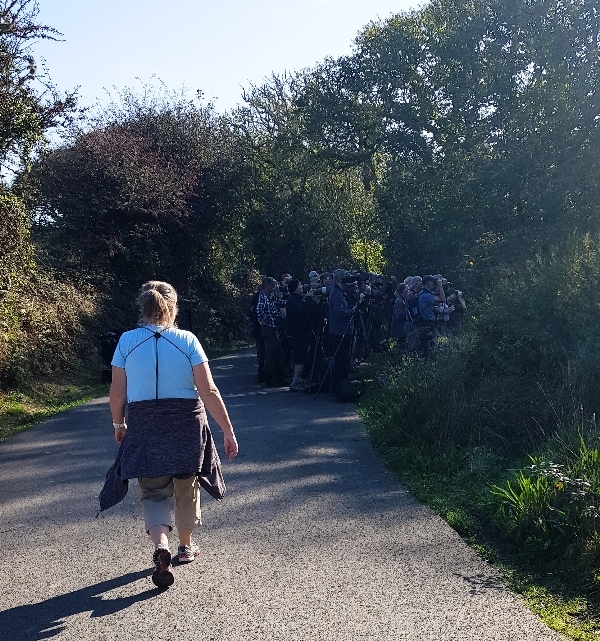 aspproaching Newford Duck Ponds and the crowd of twitchers

The short walk to Watermill Cove went without a birding incident, we stopped to admiral the views from the ridge overlooking the cove. The landscapes were stunning, the light and colour so picture perfect it was amazing.

A short time was spent looking for a Red-backed Shrike which was proving to be a bit elusive, however we all got to see it well in the end. It was never close but our optics took care of the distant views adequately. 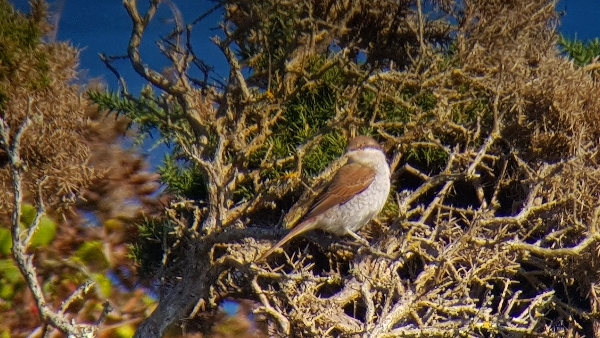 We sat and ate our picnic lunch before walking around the headland into Pelistry Bay, along the coastal path we bumped into the Shrike once more, this time it was much closer. We noticed that it had only one eye and pondered on its survival chances. 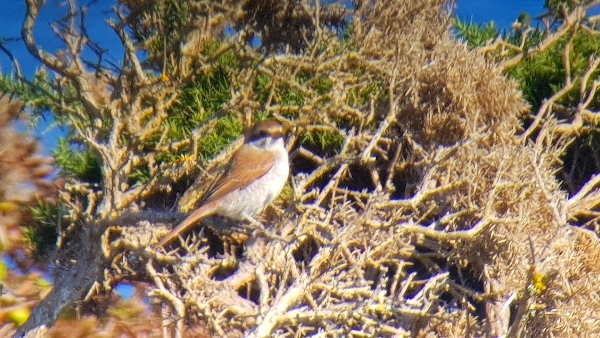 now showing its good side

Saying goodbye to our One-eyed Shrike we walked down to the beach to scan the rocks around Tolls Island in Pelistry Bay. We searched for a Whimbrel without luck but I did find a Pipit on the top of the island at far end. Heat shimmer made viewing difficult but I would have put money on it being a Red-throated Pipit, alas the bird disappeared before I could clinch its ID, it would have to be one that got away.

Next, we walked up to Maypole having searched a couple of fields looking for a roaming Mistle Thrush which must have roamed out of sight somewhere else.

We found ourselves at Maypole and took the trail through the Holy Vale which was deadly silent and very still. Walking across Higher Moors we had a brief view of a Water Rail, a Common Kestrel hovered over us and a Cetti’s Warbler flew across the path in front of us before calling whilst out of sight, 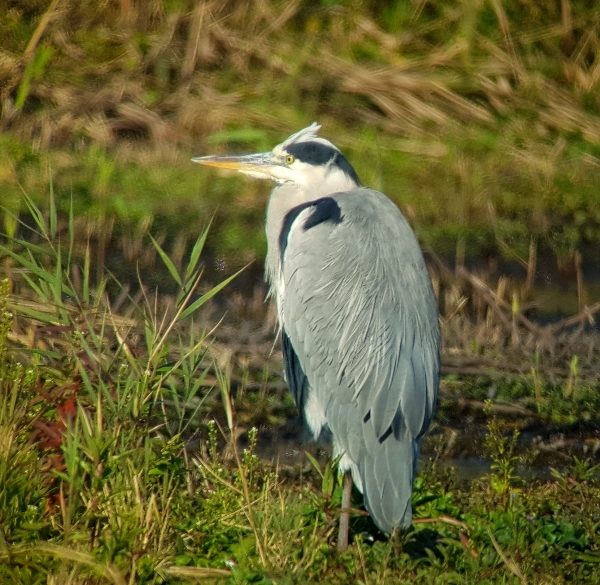 From the two Hides overlooking Porth Hellick Pool, we saw Grey Heron, Moorhens, Mallard and both JACK and COMMON SNIPE, both of the snipe were fast asleep but very close to the seaward Hide. 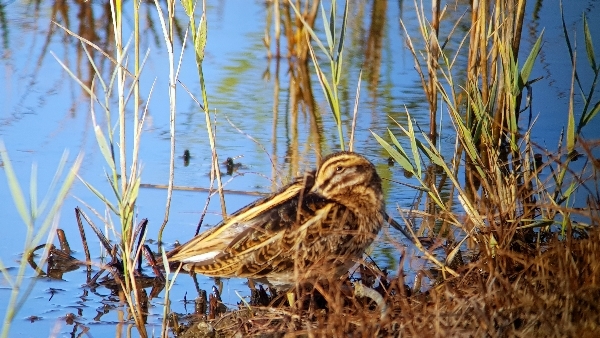 We scanned the rocks from the beach at Porth Hellick, it was high tide and all the birds were roosting out in the bay on the rocks. We counted 7 Greenshanks, dozens of Ringed Plovers and an equal amount of Ruddy Turnstones. Out at sea we watched Gannets drift by and Shags fished in the water, Great Black-backed Gulls sat on the uppermost rocks. 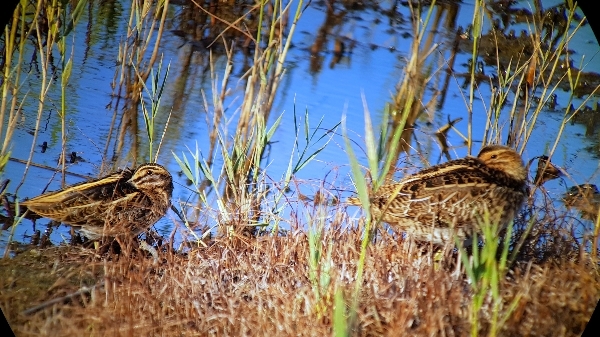 It was now 4pm so we called it a day, all we had to do was walk back to the guest house, which was a mile or so away. A brief stop at Parting Carn Farm produced sightings of two Black Redstart, one of them was a stunning male.

The house opposite our guest house had another Black Redstart on its roof, I got some good digi-scoped pictures of it. Apparently two more turned up later! 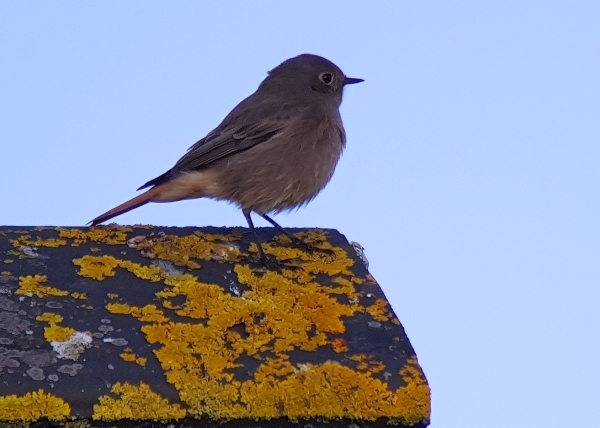 Black Redstart, photographed from the garden of our guest house 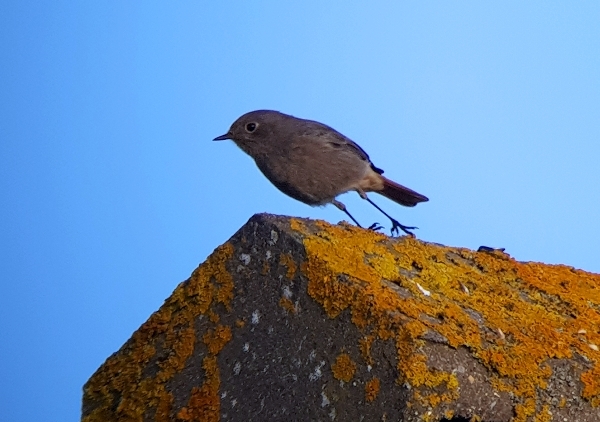 Later we walked into town for dinner, a Roast Beef and Yorkshire pudding platter went down a treat!