DAY 2 OF THE DORSET AUTUMN TOUR

Our second day began with a pre-breakfast walk just east of the Town along the River Frome. It was dull and quite wet to start with, but it got drier and thankfully there was no wind, not even a light breeze.

We walked down to the reedbeds where the River flows into Poole Harbour, very few birds were on show, we did have a very brief sighting of a Eurasian Sparrowhawk and we did see flyover Grey Heron and Canada Geese, also several Curlews flew by with Greylag Geese and on the large pools we saw Little Egret, Gadwall, Moorhen, Coot, Great Crested Grebes and a few Mute Swans. 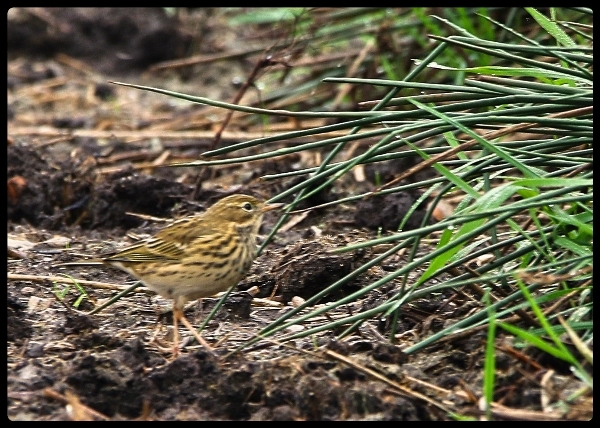 In the hedgerows we heard two or three Cetti’s Warblers and after a bit of patience we eventually saw one in flight. On the way back we saw our first Egyptian Geese (9), a single Greylag fed with them as well as a dodgy looking goose with a white head.

We spoke to a farmer who told us that 5 Cattle Egrets were in a nearby field so we made an effort to see them. We found good numbers of Linnets, Goldfinches and Meadow Pipits, but there was no sign of the egrets.

After a lovely breakfast at the hotel we set off towards Arne making our way across the vast heathland of Stoborough and Hartland Moor we had intended to stop on Hartland but a road closure put a stop to that.

Nigel spotted a bunch of 5 Mistle Thrushes and we had sightings of Jay, Magpie, Rook, Crows and our first Collared Doves along the way.

The walk to the hide that overlooks Middlebere ‘Lake’ produced very little, just a few common garden species such as Dunnock, Robin, Blackbird and Starling. We did see some Sika Deer, two of which were unusual being pure white. 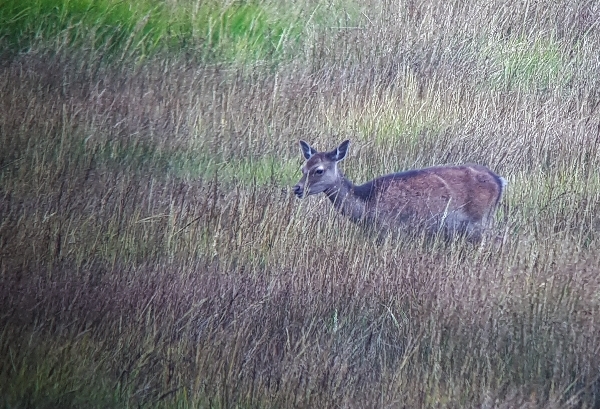 As we got nearer to the hide we had a wide panoramic view of a large area of reeds and open marsh where we saw a few Curlew, Black-headed Gulls and a very distance bird of prey that was being chased around by a couple of crows, it was either a small male Sparrowhawk or a Merlin, but it was too far off and we had quite a sort fleeting view of it to be certain.

It was high tide when we arrive at the hide, so the ‘lake’ really was a lake, very little mud was exposed and at first glance the area looked devoid of birds. However, on further scrutiny we found a nice flock of Avocets (70+), a few Black-tailed Godwits and partially hidden in the reeds we had views of Teal, Wigeon and Pintail. 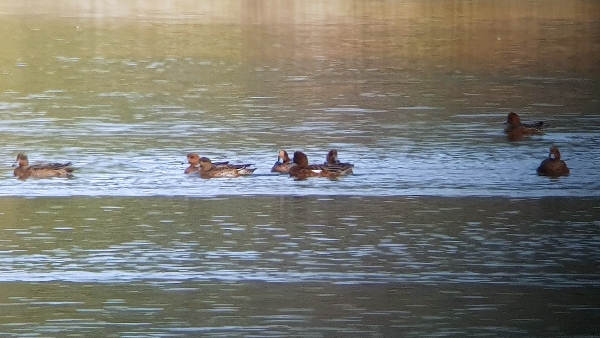 At one point all the ducks moved away from the reeds and the waders took to the air, we could not see what caused the disturbance but we assumed it was something in the reedbed such as a fox or an otter. At least 60 Pintail emerged from the reeds, with a dozens Wigeon and many Teal, the aerial display given by the swirling mass of Avocets was spectacular but no-one captured it fully on their digital devices. 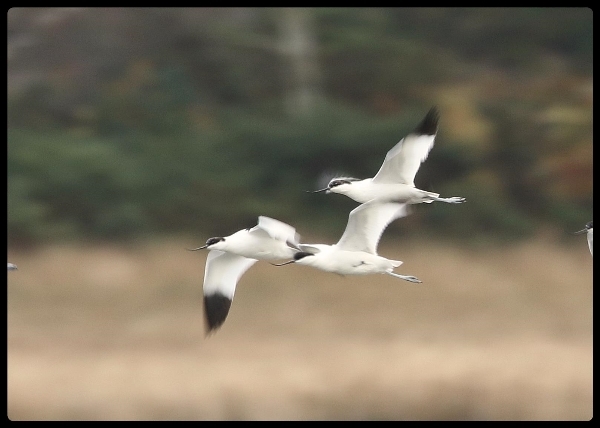 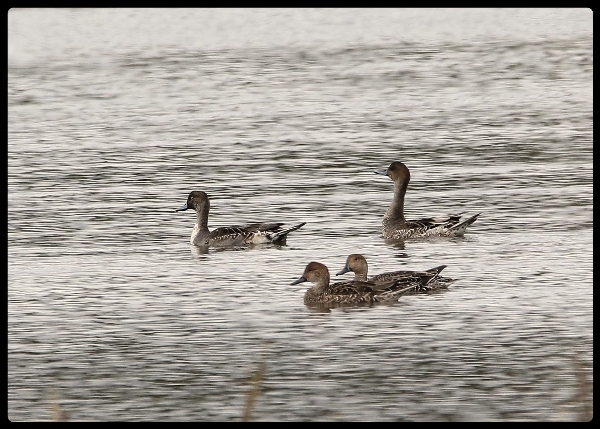 A flock of Black-tailed Godwits fed in a grass meadow, we could just about see them through a line of bushes, a single Lapwing sat near them. We also saw Meadow Pipits, Stonechats, lots of Swallows and House Martins, Common Buzzards, Ravens, Grey Herons and a fair number of Little Egrets. 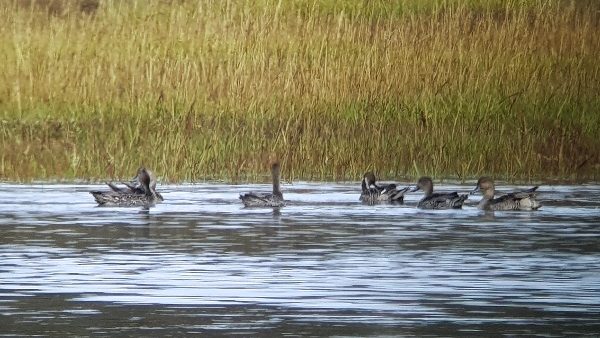 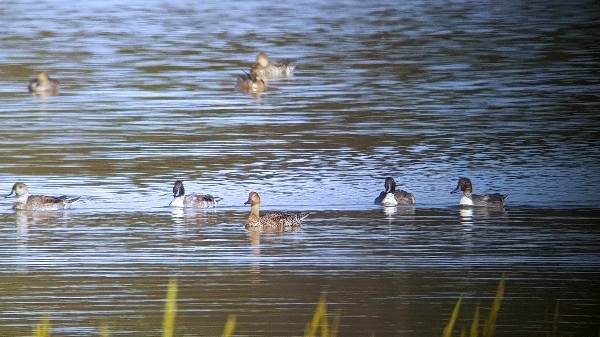 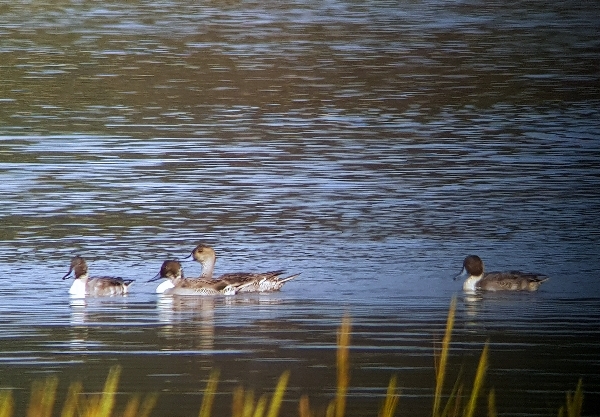 Nigel had brought the bus along the lane to collect us and as we drove back to the main road we saw Bullfinches dashing in front of us. A 10 minute drive found us at the car park of RSPB Arne, we quickly disembarked and walked across to the café to eat our lunch at the picnic tables, the weather had picked up nicely and sunshine emerged from the broken clouds. Mike Taylor bougth us all an ice-cream (he's from Yorkshire would you believe) which was much appreciated in the warm sunshine.

After a brief watch at the feeder station back in the car park, where we saw Blue, Great and Coal Tits with dozens of Goldfinches and Chaffinches, we set off on the circular walk down to Shipstal Point. A large flock of Long-tailed Tits was our next find with a single Chiffchaff in with them.

Apart from Pied Wagtail, Meadow Pipits, Linnets and a flyover flock of Siskins were saw very few species actually grounded so we made good progress. Just before Shipstal Point there was a viewing area where a good section of reeds and open channels can be viewed and it was there that we saw the spectacle of 40+ Eurasian Spoonbills flying in to feed. They all landed in view, a bit distant but still a lovely sight. 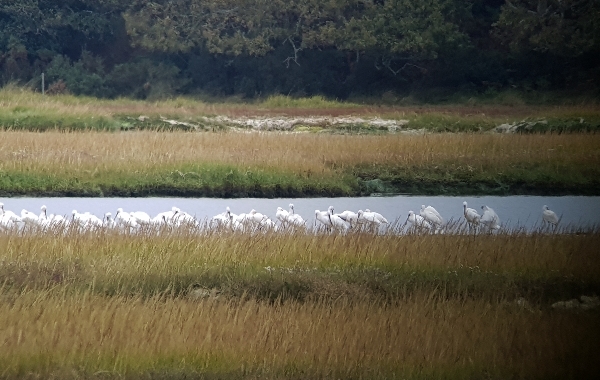 distant Spoonbills we counted 44 of them

At Shipstal Point we stood on the beach and scanned a vast area of Poole Harbour, with Brownsea and Round Islands in from of us. The water was flat calm, it was easy to pick out and birds on the water, we saw Cormorants, Great Crested Grebes and a small group of four Common Scotor. 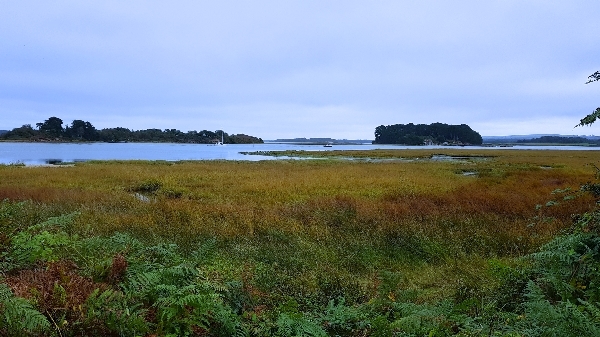 A good number of Sandwich Terns were dashing about, we counted 17, resting with some gulls. We added Oystercatcher to our list and saw many more Curlews and Black-tailed Godwits. We sifted through large numbers of gulls and found only the common species. 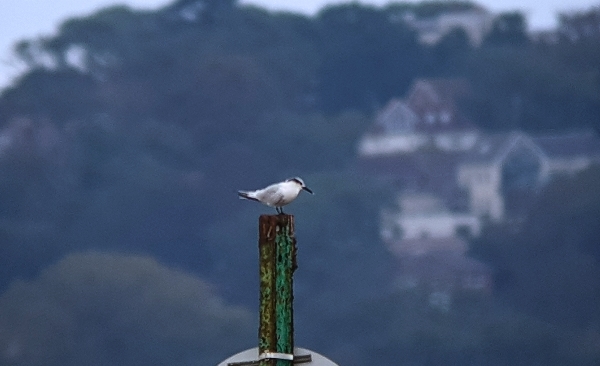 Before we set off for the walk back to the car park we spotted a very distant Marsh Harrier, it was perched low over the reeds. The bird took off and flew a few hundred meters were it flushed two other Marsh Harriers, perhaps a pre-roost meeting, all three looked like female types but they very distant.

Our walk back took us through some lovely oak woodland, we had a close encounter with a Sika Deer but saw little else. Back at the car park we watched the feeders again, where Siskin and Nuthatch were seen by just a couple of us. 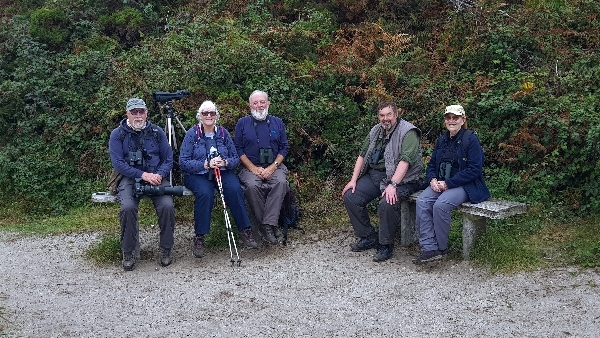 my tired group near Shipstal Point

Everyone was tired, we had walked 14,000 steps today, so I drove us back to the hotel arriving at 5pm and thus concluded day 2 of our Dorset Tour.