WEATHER; a mixture of fog, mist and clear sky, with some cloud later and some drizzle.

My group of 8 slowly dwindled to 7, then 6 and then 4!!  Injury and illness and fog were to blame. However, we soldiered on and 4 of my group joined me as we boarded the Scillonian III for the 2 ½ hour crossing to St Mary’s and although it was foggy the sea was flat-calm as pulled out of the Harbour at Penzance. 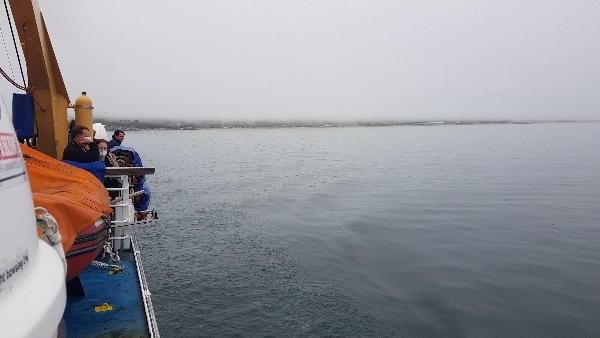 the flat, calm sea-state as we left Penzance Harbour

For the first hour we didn’t see because we couldn’t see very far but slowly the fog lifted and our visibility was extended, then we started to see birds and cetaceans. Two Razorbills were fairly close as they got up from the water and then we saw a a Risso’s Dolphin also fairly close to the ship, identified by it grey colouring and scarred dorsal fin.

The ever present Gannets was joined by many Manx Shearwater sightings, at first we saw ones and twos but then small groups turned into larger groups until we saw large rafts lift from the water as we progressed, we must have seen a couple of hundred. Sifting through the flocks of shearwaters for a brown one or a larger black one paid off several times as we picked out 3 Sooty Shearwaters. 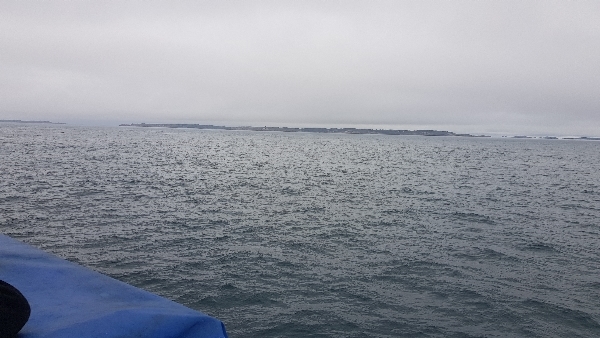 a sighting of the Isles of Scilly

A ‘Bonxie’ (Great Skua) flew past us above the skyline and we had sightings of Common Dolphins on a few occasions, then we spotted a large gathering of Gannets in the distance up ahead of us, they weren’t diving but dropping down onto the surface to feed. We could see a great disturbance below them on the surface of the water. It was a large shoal of Tuna, you could see them jumping out of the water chasing smaller fish, a large gathering of shearwaters was also visible. We picked out another Sooty Shearwater (although other people saw two).

Finally as we approached the Isles of Scilly we saw our last Sooty Shearwater, a little nearer the boat too! Lots of European Shags sat on the rocks with a few Cormorants and we saw a distant Sandwich Tern. 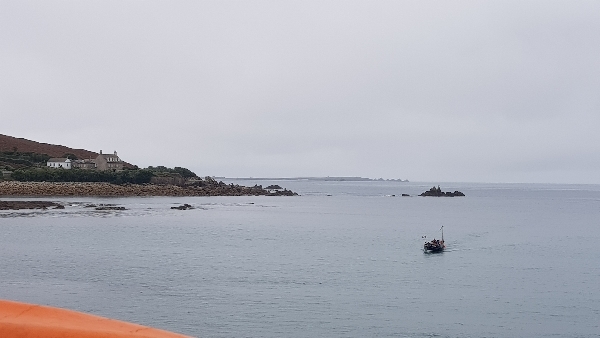 Our trip was over as we docked at St Mary’s, we were greeted by a bunch of House Sparrows as we disembarked. A quick visit to the local supermarket was made before we walked up to our accommodation, our luggage would follow soon, we hoped!!

We found out that our suitcases may take up to two hours to arrive so we set off for our walk without our scopes (all of our tripods were in the suitcases). We walked down to Old Town beach and scanned the rocks and the weed-covered beach finding two Greenshanks, a Grey Heron and some gulls. 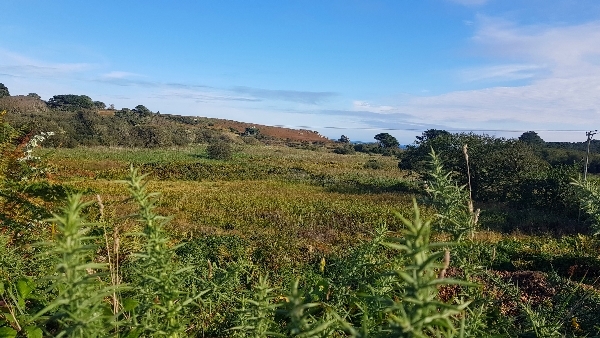 a view of Higher Moors

The hedgerows were pretty much birdless, we did see small flocks of Starlings, Wood Pigeons and Collared Doves and the occasional Robin sang out. We paused at the entrance to Higher Moors to look for a reported Yellow-browed Warbler, we saw Dunnock, Wren, Blue and Great Tits and a few Goldfinches but not the warbler.

The trail through moors was also pretty much birdless but as we stopped to watch a very obliging Song Thrush take a bath we spotted a Water Rail sneaking about in the undergrowth, it eventually showed very well and we had great close views of it.

On Porth Hellick Pool we saw a few Moorhens, Mallards and Teal but not the hoped-for PECTORAL SANDPIPER. So, we walked to the beach area and scanned the large, exposed area of sand, weed and rocks. We found a dozen Greater Ringed Plovers, two more Greenshanks and single Ruddy Turnstone. In the scrub behind the beach we added Stonechats and Linnets, a Sparrowhawk flew over and many Crows were drifting around. 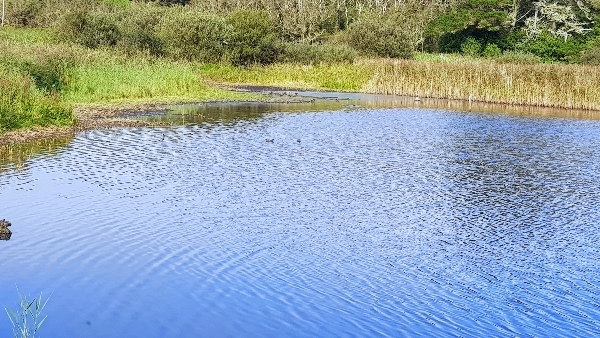 On the way back we popped into the hide once more, a local birder was in there and he had the Pectoral Sandpiper in his scope!! We all got to see the bird in the scope, smashing! The guy turned out to be quite entertaining telling us funny stories of the exploits of Walley the visiting Walrus and the formation of the many local and varied committees, formed to try and come up with a solution to this marauding menace!!

Another look for the Yellow-browed Warbler produced sightings of a Garden Warbler, Common Chiffchaff, Wren and not much else we did hear a Cetti’s Warbler.