We met at 7am and went for a short walk to the beaches near our guest house, we started at Town Beach were we saw a Grey Heron and a couple of Black-headed Gulls, moving around to Porth Mellon Beach we added Oystercatcher, as you can gather there was not a lot out there.

At Porth Loo Beach there is usually a wader gathering, today there was 14 Oystercatcher and a single Curlew, a couple of Rock Pipits flitted about in the dead seaweed and a number of gulls gathered on the far end of the beach. On Heron Island there was, in fact, a Heron, a Grey one, also Great Black-backed Gull and more B H Gulls, a few Shags fished in the bay. Behind the beach we found a bunch of Linnets, a couple of Greenfinches and the usual common garden birds. 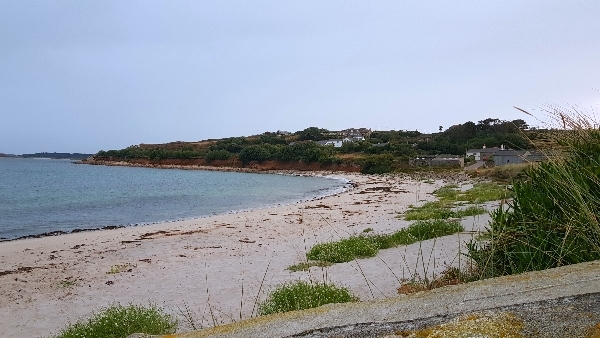 Before we went back for breakfast we walked round to Porthcressa beach to look for the locally uncommon Great Crested Grebe but it was quite choppy out then and we could not pick it out. 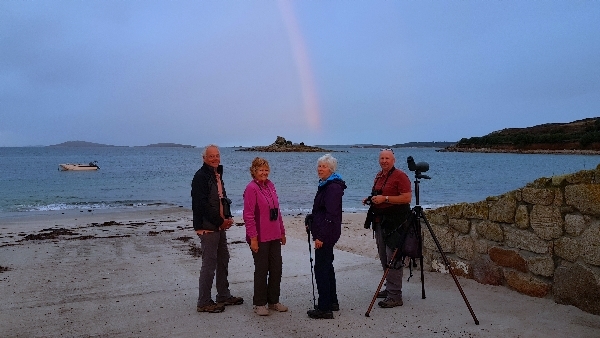 a rainbow developed behind Heron Island 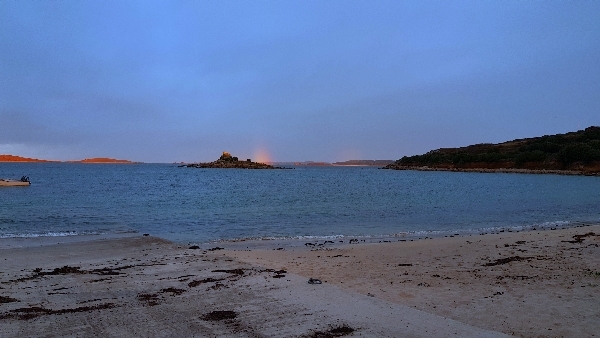 as the rainbow faded away it left a ball of coloured light just above the horizon, you had to be there to appreciate it

After breakfast we walked down to the quay in the harbour and boarded a boat to Bryher, a few good birds had been seen there and it looked the best option for the day. A couple of Mediterranean Gulls and a Sandwich Tern was seen from the boat. 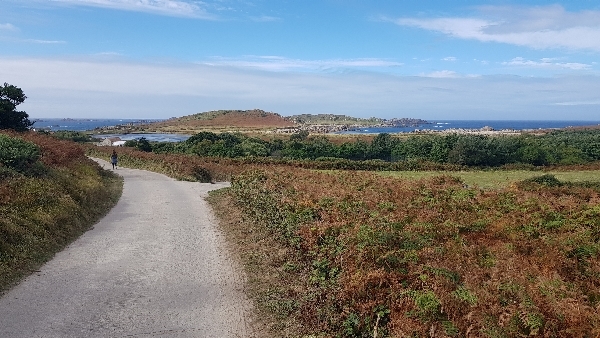 looking down to the Great Pool on Bryher

Once we were on terra firma again we marched across the island to the Great Pool, along the way we sifted through a flock Starlings looking for a Rose Coloured variety without luck, but we picked out a Common Whitethroat in the hedges. At the Great Pool a single Brent Goose was sitting in the water, it looked very much like a Pale-bellied variety because of its very white flanks but it could have been a pale 1st winter bird. 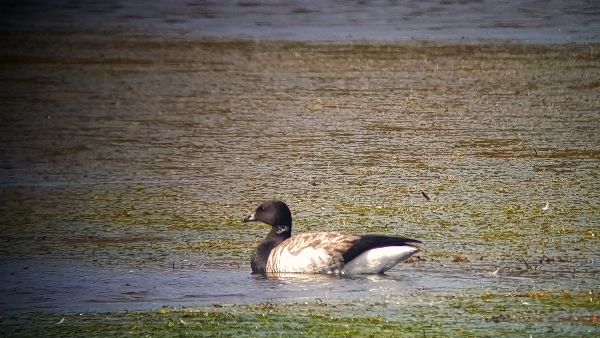 Brent Goose on the Great Pool

Behind the brackish Great Pool lies a small cove, it is called Stinking Porth because of tha amount of dead sea-weed that gets washed up there and the smell can be quite bad in the summer. We were looking for a Baird’s Sandpiper, we had a few people looking but they had moved on without success. The cove was covered in large stones and pebbles, but we could not see any waders, so we walked a little way to look into a smaller cove adjacent to Stinking Porth.

There we struck gold, the Baird’s Sandpiper was standing on a stone near to three Greater Ringed Plover, job done, we took some pictures before the bird flew off into Stinking Porth. Tim picked out a Curlew roosting in the larger boulders and we watched White Wagtails, Linnets and Rock Pipits before we moved on. 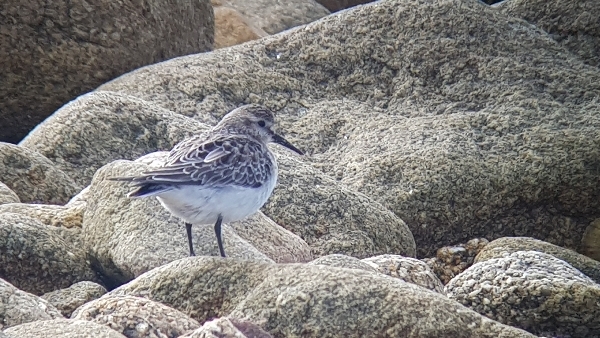 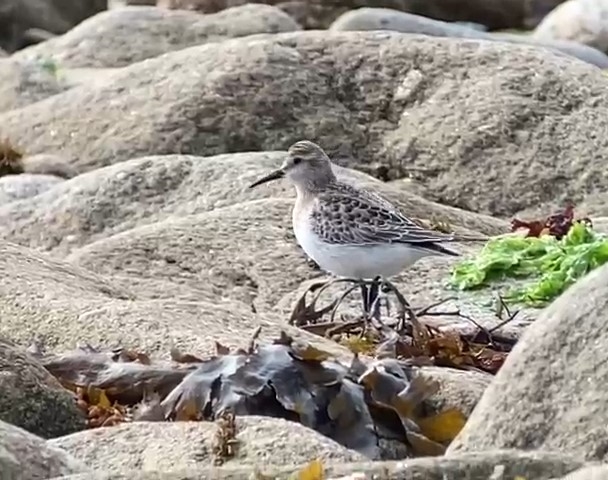 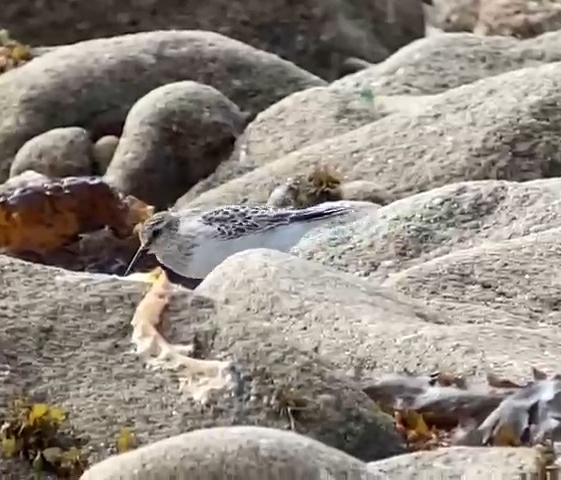 another of Tim's pictures, it is a screenshot taken from a short video of his

From there we back tracked to where we saw the starling flock because Terry had mentioned that he had seen a lighter brown bird in with them. The flock was coming down to feed on berries in a number of Pittosporum bushes. It was Terry who picked it out once again, it was on a roof with a line of Common Starlings, well done Terry. 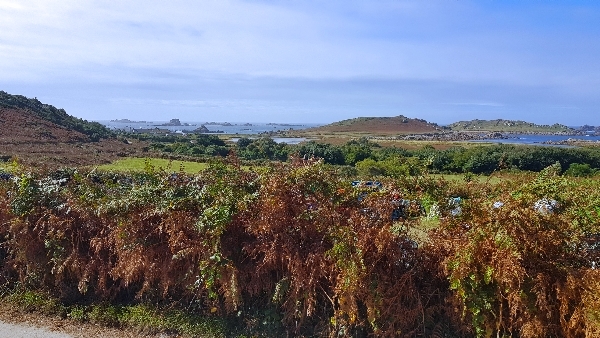 another view looking down from the Post Office on Bryer, where we ate our lunch

We sat around a picnic bench and ate our picnic lunch in the warm sunshine, we were out of the brisk breeze and enjoyed our lunch. We were soon moving on, this time we headed to Shipman Head Down, a totally different habitat of low-lying heath on a plateau, this unique environment wit its harsh maritime conditions and shallow soil has led to the development of a ‘waved’ heathland which is difficult to walk over and excellent for birds to shelter in. 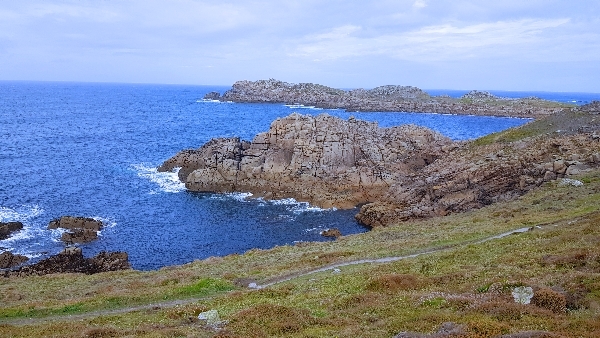 up on Shipman Head Down

We were looking for a Buff-breasted Sandpiper, but as we left the farmland area to follow the footpath up to the heath we were distracted by a single WhInchat and some of the group spotted a Kestrel. Once up on the top of the heath we spread out, keeping to the footpaths as much as we could. Within a few minutes we found the bird, most of us had excellent views except for two of the group who were the furthest away. The bird didn’t stay long because another birded approach from the other side of the heath and flushed it! 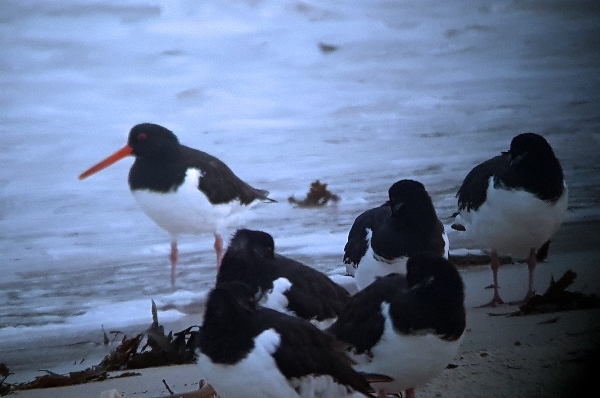 We spent an hour or so trying to relocate the bird but we never did. Most of the group retired for the day and went for a coffee near the quay, we still had 90 minutes before we had to catch our boat back to St Mary’s. I walked for another 30 minutes looking for the sandpiper without luck. I then walked back to the area where we had had the starling sighting, before walking down to the quay.

Just before I arrived at the café I bumped into a Wryneck, a couple of people thought they had seen a bird that looked like a Wryneck and when it popped out of a bush I confirmed it. Soon I had the group onto the bird before it disappeared. 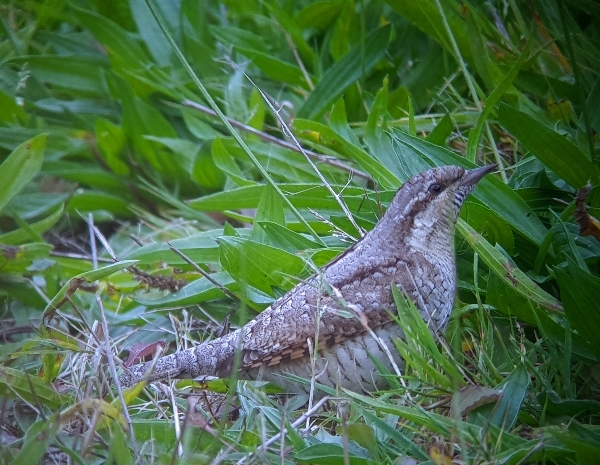 the Wryneck our last bird of the day

What a great bird to find before we left island, it had been a superb day, we saw all of our target birds and more!