DAY 4 - OF THE DORSET AUTUMN TOUR

WEATHER: a misty start followed by all day sunshine with a very light breeze, some cloud mid-afternoon. Top temp 18C

We checked out of our hotel around 9am and set off for Weymouth via Wareham Forest and Dorchester, it was a misty morning but perfectly still. After 10 moinutes on the road we stopped at the northern edge of Wareham just after Sweet Hill (where the 2019 fire destroyed a vast area of the heathland).

The pine forest was deathly still, nothing stirred, a mist hung around the trees which stood in rows like terracotta soldiers awaiting battle. A Robin burst into song, unsighted, but alerted us, made us aware of is presence with those joyful notes. And that was it! That was the sum total of te birdlife we encountered on our short walk. A second walk on te opposite side of te main road proved identical the first, so we left the forest. 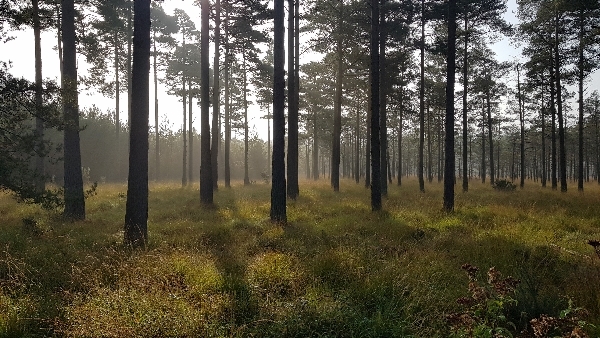 The Scots Pine trees, the sentinels of the forest

A mile further north we parked next to a farm with a campsite in the field beyond, I k new this was a good place to look for a few passerines, especially Yellowammers. We saw Robins, Dunnocks, Stonechats, Goldfinches and Chaffinches and even a couple of Bullfinches before we got a glimpse of our target species the Yellowhammer. We saw a Kestrel on a telegraph pole and near to it on the wires was a male Yellowhammer. Bingo!! 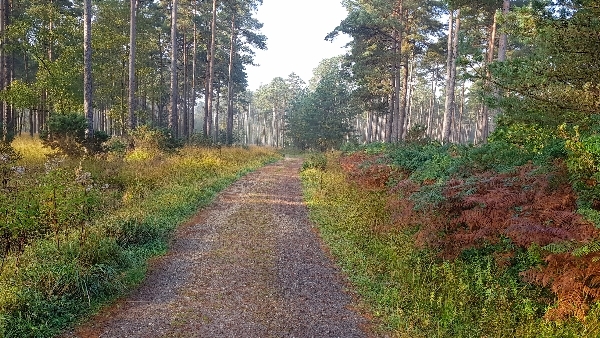 A typical track in Wareham Forest

We saw 3 or 4 Yellowhammers in the end after moving ½ mile to another lane, a flurry of Jays flew over, this is becoming a common occurrence these days, I have never seen so many Jays as I have in the last week or so.

At Maiden Castle (which is  a Grass Hill Fort) we spent two hours walking the tracks around this ancient Fortress, it is a huge area with panoramic views in every direction from the top. A local farmer who is sympathetic to wildlife grows environment friendly crops with a large of area of set-aside planted with seeding plants such as sunflower and mustard. 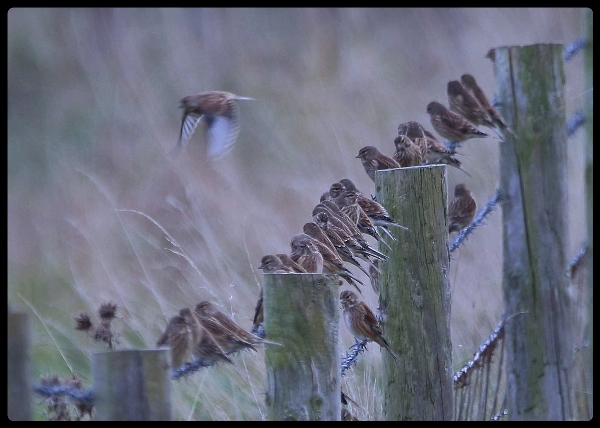 These areas attract huge numbers of Linnets, Meadow Pipits, Goldfinches and Skylark as well as Stonechats and passing migrants such as Whinchats and Wheatears. 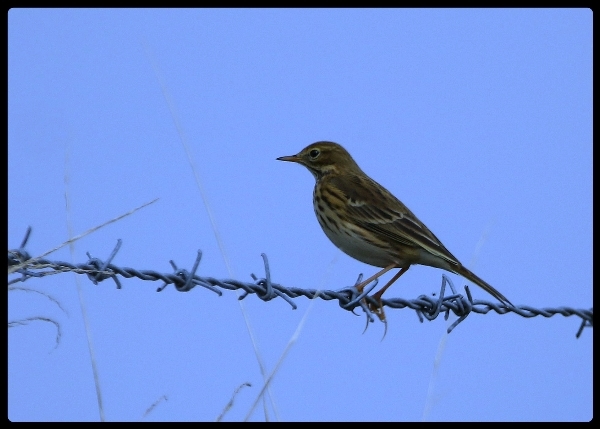 Meadow Pipit another photo of Mike's

During our walk we saw many Stonechats, a single Whinchat and a single Wheatear, a few Common Chiffchaffs as well as a dozen Skylarks, umpteen Meadow Pipits, a couple of Kestrels, five Common Buzzards and all the usual corvids, Crows, Rooks, Magpies and Jays. We only saw two Swallows which was a miniscule amount  after yesterday’s hirundine fest at Old Harry Rocks. 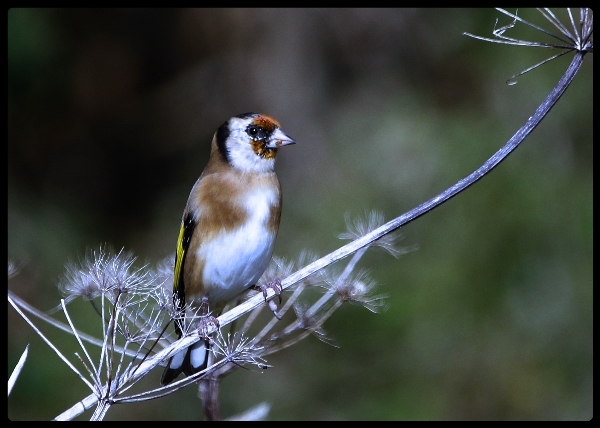 a Goldfinch - picture by Mike Ambler

We ate our lunch in the main car park before heading off to Weymouth where our first port of call was Radipole Lake RSPB Reserve. We made a quick stop at the Tennis courts to view the large northern lagoon from the roadside. We saw many birds there, including Shoveler, Teal, Gadwall. Moorhen, Coot, Mute Swan, Grey Heron, Cormorants and a large amount of gulls which were mainly the Mediterranean species. 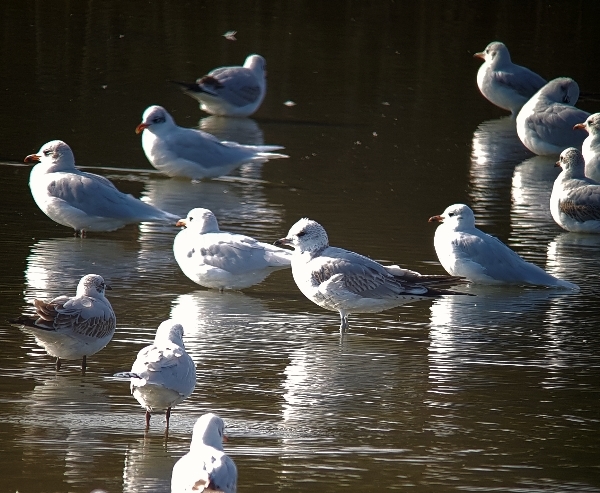 From the main viewing area at the visitor’s centre we added Common Snipe, Common Gull and a Water Rail to the list amongst others. 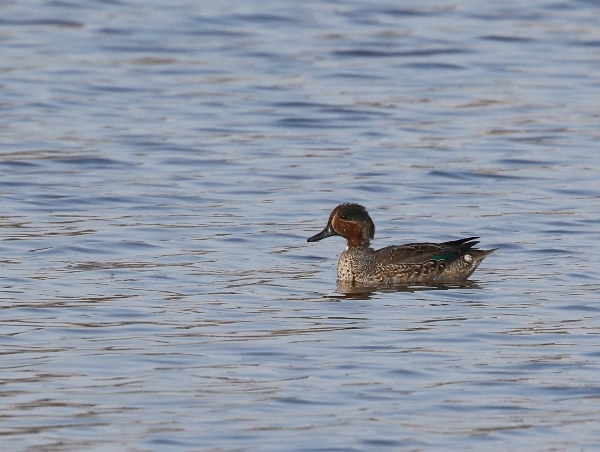 Our final walk was along the western and north sides of Lodmoor RSPB Reserve, we had superb light with the sun behind us for most of the time. A great display of species was on show, I shall not mention them all, but the highlights include all three species of European Egret, all seen within  minutes of arriving, wow! There are not many place in the Uk where you can do that! 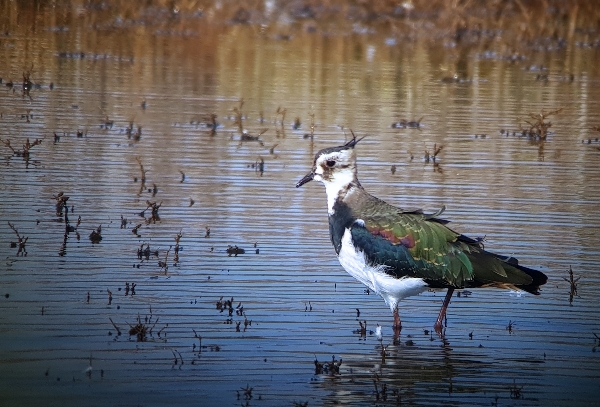 a Lapwing, AKA Green Plover, you can see why!

The brilliant afternoon light illuminated the iridescent colours of the Lapwing’s wing feathers, even the drab winter plumaged Dunlin, Redshank and Black-tailed Godwits looked dapper in the light. We found two distant Green Sandpipers and the over-wintering ‘white’ Ruff, which is obviously suffering from some degree of leucism. 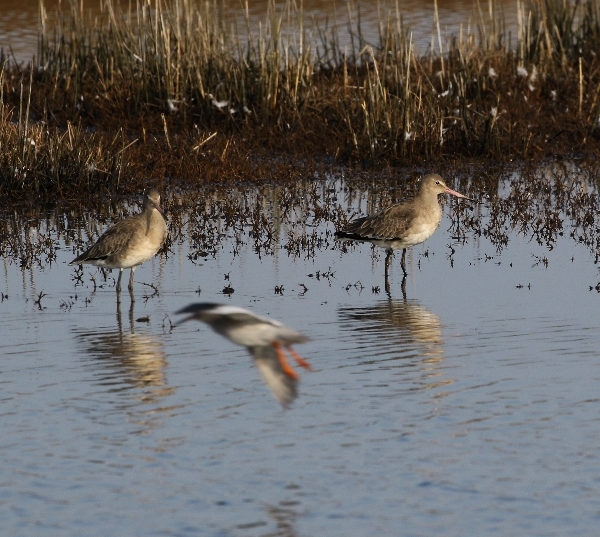 Walking further around the reserve we watched a Marsh Harrier disturb the flocks of birds, amongst the many gulls we found 9 Sandwich Terns. From the northern track we looked over the marsh from the elevated road along Beachdown Way from where we added our last new bird of the trip in the shape of a Little Grebe. 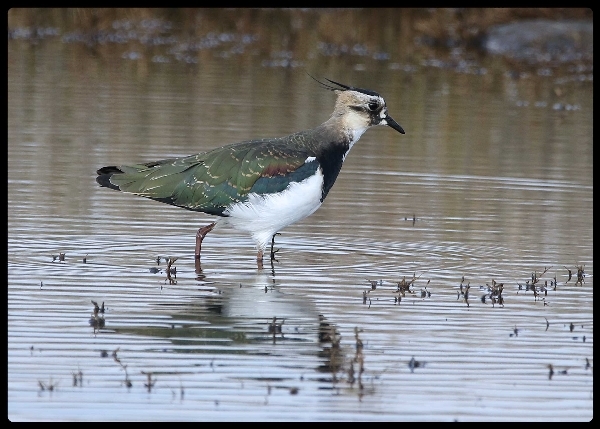 Mike's attempt at catching the irridescent glow of the Lapwing

A nice flock of Shoveler in varying degrees of summer moult was nice to see and became our last sighting of the day. Nigel had gone back to get the bus and e ad driven it round to picked us up, how nice was that?

For dinner we dined out, in fact we ate true al fresco, because we bought take-away fish and chips and ate them in the parkland area around the Nothe Fort!! It got dark as we ate and a little bit chilly, we shan’t do that again.