After an overnight storm with high winds and lots of rain we were optimistic that a few birds may have been deposited on the islands. So, after our lovely breakfast at the Guest House we set off on a hike that would take us to the top of the island in search of a Balearic subspecies of the Woodchat Shrike.

We took the road that led down into Old Town where we viewed the beach, or should I say a tiny strip of sand along the shore as it was a full high tide. We saw an Oystercatcher and a Grey Heron there, also a few Greenfinches in the scrub behind the beach. A quick walk through Lower Moors with a visit to the hides produced very little, Moorhens and Mallards, and nothing else. The wind was annoying it seemed to swirl all around us and we could not find sheltered areas were birds might feed. It was much the same at Carreg Dhu Gardens and those small sheltered corners held nothing except for a few common garden species. 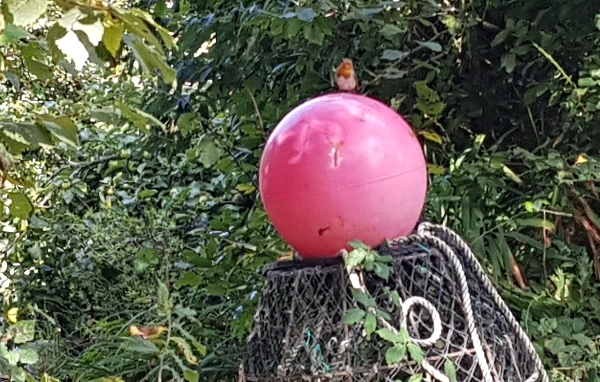 A Robin, I think it is a buoy.

We walked down to the Holy Vale via Longstone seeing Starlings, House Sparrows and a few Goldfinches along the way, it was quite sheltered in the Vale but we saw zilch. At Higher Moors we had a raptor fest! A single Common Kestrel had a short altercation with a Peregrine Falcon, it was all over in seconds as the two 'mighty' raptors went their separate ways. A good number of Barn Swallows fed over the reedbeds with a few Sand Martins thrown in. 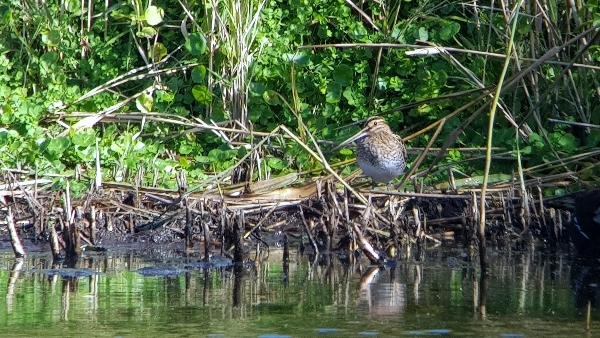 this Common Snipe was disturbed by a Grey Heron otherwise we would not have seen it!

At Porth Hellick Pool we sat in the Stephen Sussex Hide hoping for a closer view of the Pectoral Sandpiper, we saw Moorhens and a Grey Heron which flushed out a Common Snipe but not our visitor from North America. In the willow scrub we heard and then saw a Common Chiffchaff, also Wren, Blue and Great Tits flitted about. By the time we had walked up to Maypole it was time to eat our lunch, we had endured a couple of rain showers and another one began just as we sat on the roadside benches to eat, how nice, a picnic in the rain!

We moved on quickly and found shelter along the track to Watermill Cove, we neared the spot where the Woodchat Shrike had been seen. For nearly an hour we searched in the wrong places for the Shrike, misled by ambiguous directions and dubious interpretation of said directions. But, eventually we found the bird doing what Shrikes do, sitting on top of a bush along a hedgerow. We watched the bird feeding for a while and although it was fairly distant we had good 'scope views of it. 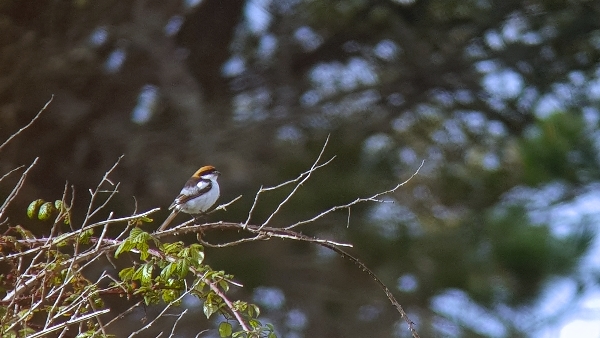 Balearic Woodchat Shrike (Lanius senator badius) is one of four forms or subspecies and is obviously only found in the Balearic Islands, the most obvious and best known plumage feature that separates this form from the other races of Woodchat Shrike is the absence or virtual absence of the visible white at the base of the primaries in the closed wing. This feature could be seen on our bird even though it was quite a distance away. Another identification feature is the narrow black forehead, also visible and noticeable in the field through the telescope on this bird.

Enough of Shrikes, we had suffered strong winds and rain just to get to see it and more rain whilst watching it, but we all agreed it was well worth the effort. What next? It was now 2:30pm so we set off back towards Hugh Town, we spent an hour and half getting back to the guest house, we were all tired and ready to call it a day, we had covered a lot of ground and our track recorders registered 22,000 steps (roughly 9 miles). 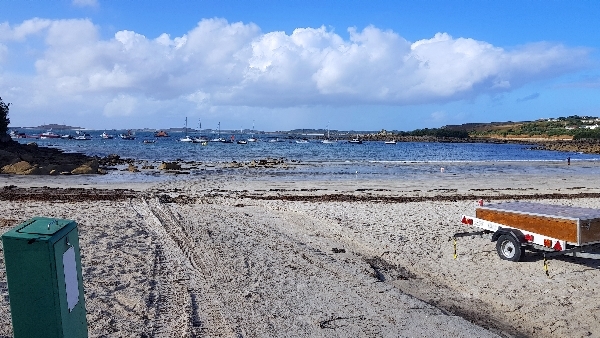 We had a relaxing time before we set off for dinner in the town. In the meantime, the final two of the group, William and Christine, turned up and joined us for dinner.  They had delayed their arrival because Christine had twisted her ankle in a fall, she is going to struggle on this trip, what fun awaits us??