WEATHER: it was pretty windy to start with and cloudy but dry. The wind died down and sun came out gradually until we had long sunny spells in the afternoon.

A change in the wind direction switching from southerlies to northerlies brought a significant change in the air temperature, it was quite cool, but at least the rainstorms had past over.

Our second trip to Tresco was prompted by a number of sightings there and fewer birds reported on the other islands. We landed at Carn Near around 10:30am and quickly set off towards the Heliport and the Abbey Pool. Scanning the rocky shore near the jetty produced sightings of Rock Pipit, Black Redstart and to our great delight a Whinchat. 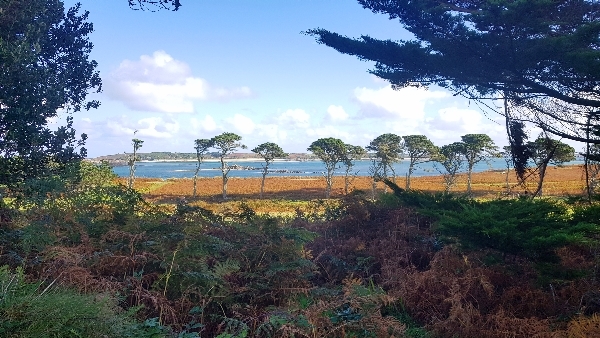 the view across to St Martins from near the Block House

At the Heliport we scanned the airfield finding a number of Meadow Pipits, more Stonecats, a few White Wagtails and to our great surprise a Skylark, our first of the trip. Small flocks of Siskins were zooming all over the place which was a feature of the day. The Abbey Pool held very little just a few Mallards, Moorhens and Great Black-backed Gulls.

The track then skirted the northern end of the Great Pool from where we saw Teal, Gadwall and more Mallards. From there we took the track that leads you up the hill to Old Grimsby, a line of mature pines sit beside the track and it was there that we saw our next species to go onto the list. 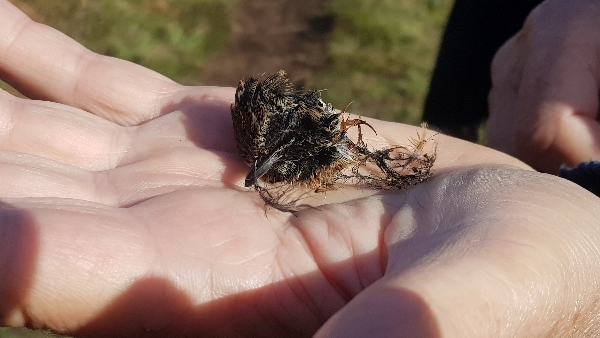 the head of a Stonechat, a victim of s Shrike perhaps

We could hear the calls of ‘Crests’ and before long we found both Goldcrest and Firecrest, the views were fleeting but good enough. Further along the track we found a second Firecrest but that one did not show very well.

It was lunchtime when we reached Old Grimsby, we sat on a grassy bank on the edge of the beach and ate our picnic lunch. The views were stunning and the superb light enhanced the beauty of the beach and the surrounding landscape. 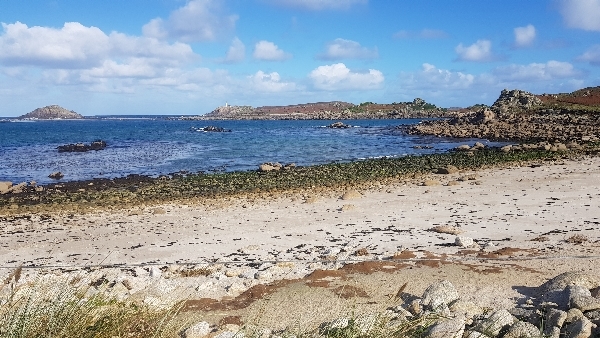 the view had from our picnic site in Old Grimsby

We then followed the coastline out of Grimsby and climbed up onto Castle Moor, we found at least 7 Black Redstarts, a few Stonechats and Rock Pipits but nothing else. The walk across the Birdless Moor was disappointing.

There was still an hour left before the returning boat departed for St Mary’s when we got back to New Grimsby, this gave us enough time to visit the southern end of the Great Pool where the main hide was situated. From the hide we added a few species to the day list and a couple to the trip list. Common Pochard and Shoveler were new for the trip and the usual ‘Shanks’ were present: we saw Redshank, Greenshank and Spotted Redshank, along with Mute Swan, Teal, Gadwall, Pink-footed Goose and Eurasian Coot.

On the return journey to St Mary’s we added Mediterranean Gull to the day count but not much else was seen. Throughout the day my phone had been pinging with news of sightings from all of the islands, it appeared that a fall of Ring Ouzels had occurred along with a few other species such as Red-backed Shrike, Hoopoe and the Water Pipits were still being seen at Parting Carn Farm. 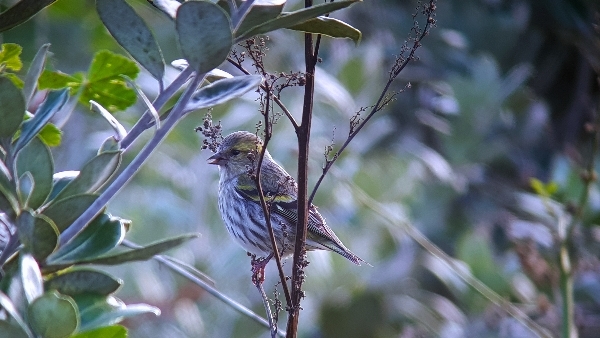 We decided to try to see the Water Pipits, so from the quay we walked up to the farm which was near the airport. We stood in a gateway with other birders and scanned the ploughed field were the pipits favoured. Meadow Pipits, White Wagtails, Black Redstarts, Siskins, Song Thrush, Redwing and Blackbirds were all seen. But no Water Pipits.

As we walked around to view the field from another angle we popped into the gateway of another field and to our great delight a Serin was feeding with some Siskins on the ground. Unfortunately we flushed it, the bright yellow rump stood out amongst the other birds but they did not return during our stay. What a shame, Serin is a good bird for our list and tihs particular bird has been around for a week or so but has not been reported for a while.

We made it back to the Guest House with time for a shower and a change of clothes before walking down into town to for dinner.