WEATHER: Rain all day, with one or two drier periods in the afternoon.

When I say we had atrocious weather, I mean absolutely horrendous rain-storms, we knew what was coming but we never thought for one minute that it going to be that bad! We got thoroughly soaked, wet through and yet we soldiered on like birder-crusaders on a mission and our efforts paid off.

The rain had been battering against my bedroom window for most of the night but had stopped when I went down for breakfast, we all agreed to continue with our plan to take the boat to Tresco. As soon as we left the harbour at Hugh Town the skies opened up and we were drenched whilst sitting on the boat. 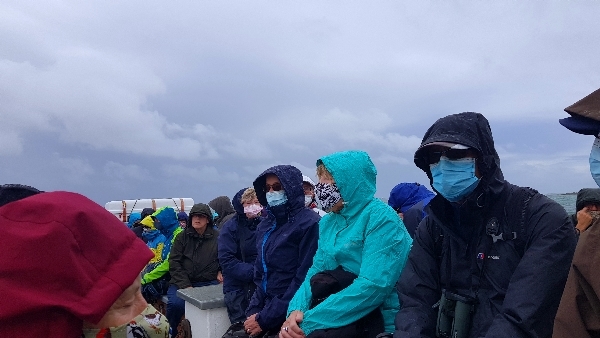 On the 'Kingfisher' just before we got our first soaking

William and Christine decided to turn back as soon as we got onto Tresco, they had not worn waterproof clothing and were well and truly soaking wet. The rest of us with all our top brand waterproofs continued up to Castle Down which is an open heathland with no shelter, light rain continued to fall relentlessly interspersed with heavy deluges of biblical proportions. I felt water trickling down the inside of my trousers and into my boots!

We scoured the heath, kicking up a Northern Wheatear and a party of Meadow Pipits but there was no sign of the Eurasian Dotterel or any Golden Plovers. During one particular down pour we sat behind a rock and ate a snack, I was starting to get cold as well as wet through.

There was one other birder out there, he seemed to cover a lot of ground too, we had a chat, he hadn’t seen a bean either, so we decided to pack in and as we walked away the guy called to us, he had found the DOTTEREL!! Reluctantly (for some) we turned back into the rain and walked over to watch the bird, yes it was definitely a Dotterel but no Plovers were with it. 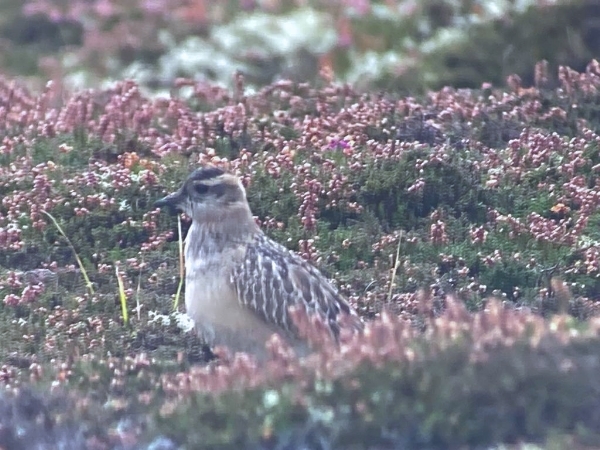 Eurasian Dotterel - both pictures were taken by Tim Oldman 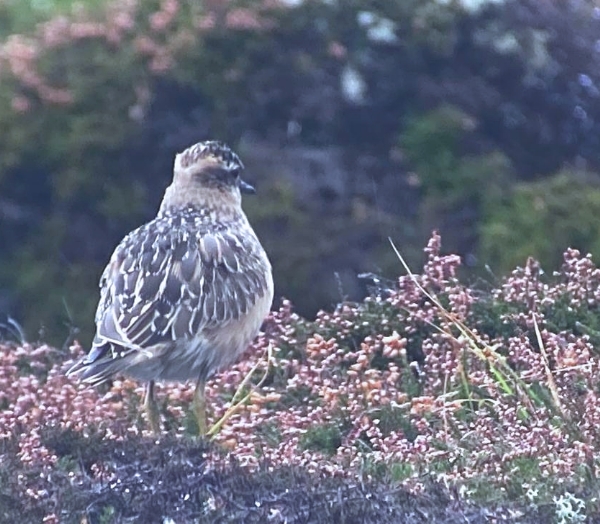 Hooray we could leave the heath and head down to the village, we then endured a shower of epic proportions, it was literally coming down just like stair-rods, but we survived, I began to shiver uncontrollably, I needed to eat something warm.

Luckily the pub was open, we sat outside at sheltered tables and drank a hot chocolate, we then decided to venture inside the warm pub and ordered hot soup, that went down a treat. By the time we left the pub the rain had eased off to a light shower and the sky brightened.

We made it to the Swarovski Hide at the southern end of the Great Pool and we were faced with a host of birds and a good number of species! Hooray again, some proper birding. Many ducks, waders and some passerines were out there. A nice margin of mud held, 14 Dunlin, 7 Greenshank, 5 Redshank and a single Spotted Redshank which is a very uncommon species for the Scillies. We also picked out 3 Water Rails, 3 Yellow Wagtails, 2 White Wagtails and a single Grey Wagtail. Many Meadow Pipits were also on the mud with the occasional Robin, Wren and Dunnock. 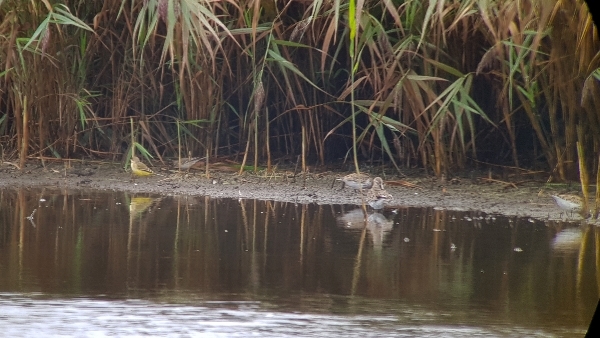 Out on the water we saw dozens of Coots, Moorhens, Teal, Gadwall and Mallards, there was also 5 Mute Swans also singles of Common Pochard and Pintail (a female). 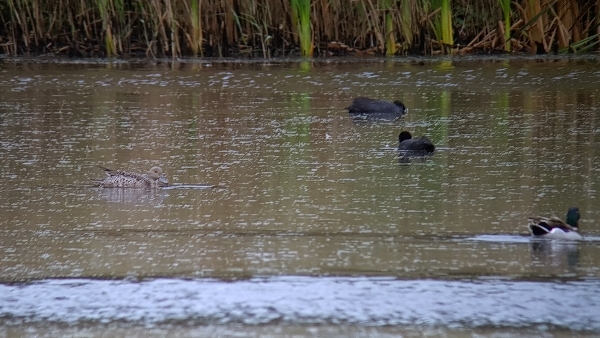 a female Pintail with Coots and Mallard

We knew that a SPOTTED CRAKE had been seen from this hide so we searched for it, but four of the group we getting cold again so they decided to moved on to the next hide. Tim and I stayed with another guy to search a little longer and our persistence paid off! Tim got onto the Crake and called out that he “got something”. Well, it was the Crake and it came out of the reeds to feed showing very well but distantly, I couldn’t keep my hands still to take a picture but Tim could. 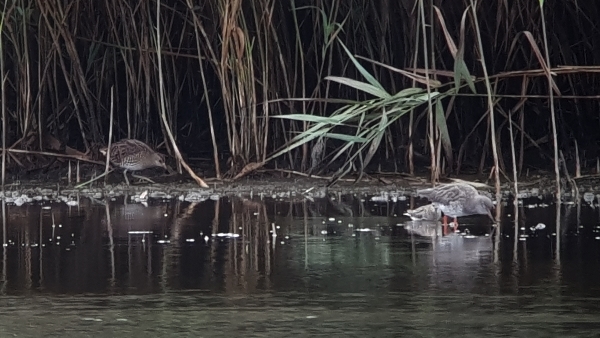 this is my only effort of the Spotted Crake 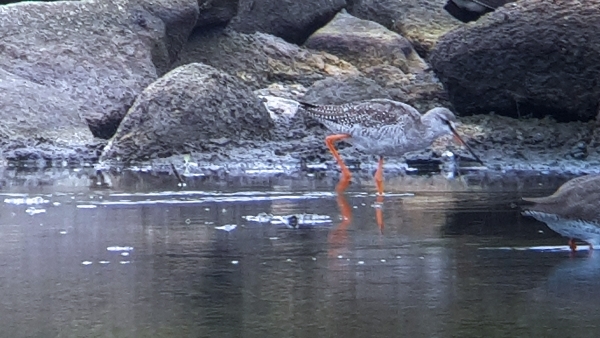 Spotted Redshank and the back end of a Common Redshank

I called the others back using my phone and the bird obligingly stayed in view until they arrived and we all got it on our list, fantastic it made the day worth while and the icing on the cake was that it had stopped raining! 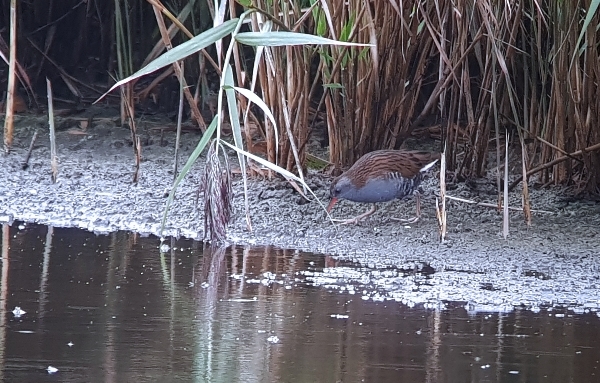 We had very little time left so we walked around to the Abbey Pool to have a quick look for the Pectoral Sandpiper, we couldn’t see it so we crossed the heliport noting more Meadow Pipits and a Stonechat. We arrived at Carn Near jetty with fifteen minutes to spare, you can guess what happened next!! Yes it poured down once more giving us one last soaking just as we had warmed up and dried out a little. 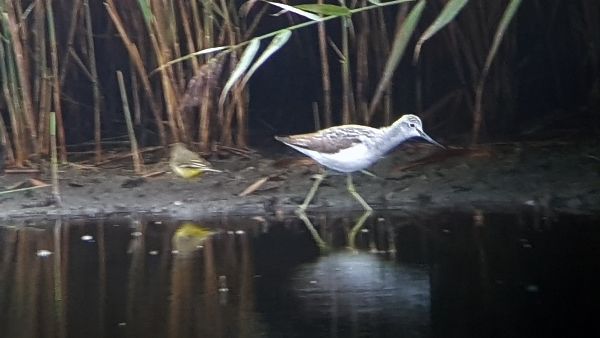 The sky began to clear and we had sunshine and a perfect rainbow just before we boarded the boat, the crossing was smooth, we landed back on St Mary’s at 5pm. Oh, how nice it was to get into that hot shower, what a relief to get out of my sodden clothes. 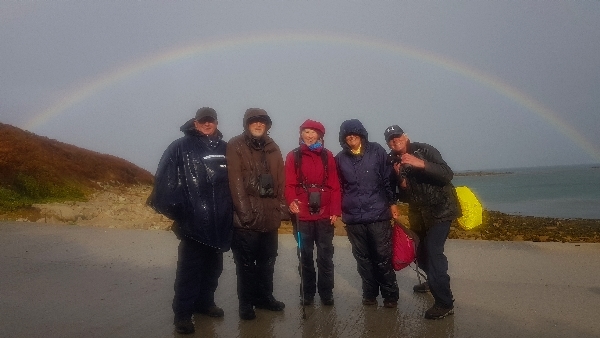 Later we walked back down into Hugh Town and ate a lovely dinner in the Scillonian Club, it poured down whilst we eating but had cleared when we set off back up the hill to our guest house. The clear sky revealed an unbelievable picture of the universe, millions of stars guided us home. Star gazing, what a beautiful way to end the day. 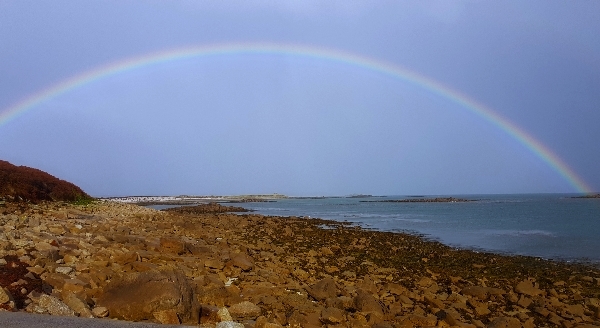