WEATHER: dull and cloudy all day, but still hardly a breeze

Most of the group arranged an early breakfast so that we could take the early boat out to St Martins, but two of group opted to go on the Pelagic Trip at a later time.

So six of us boarded the 8:45 boat to St Martins, the sea was flat calm and very little breeze stirred the water, it was a little chilly to start with but once on land we warmed up. Our first stop was at the cricket pitch where our first bird was a Black Redstart quickly followed by a Stonechat and a Robin. 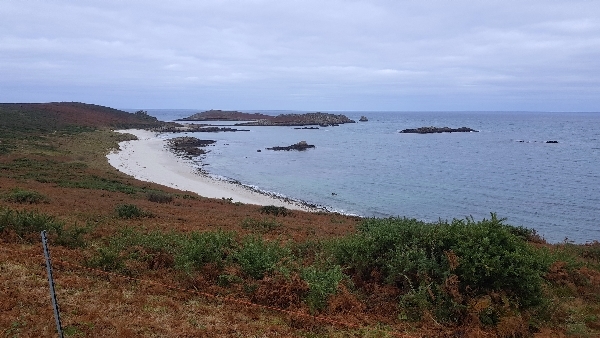 a view of the beautiful beach from the quay at Higher Town, St Martins

In the vegetable field next the Cricket pitch we saw a lot of birds coming down to feed, mostly were House Sparrows but we did find Goldfinches, Siskins, Chaffinches, Song Thrushes and Dunnocks.

The group split up at this point and four went along the main pathway to visit the other towns whilst Cheryl and I set off for high ground near the Daymark, the highest point of the island. After a few minutes we searched a couple of paddocks with sheep in them and feeding on the short turf we saw several thrushes. We sifted through Song Thrushes and Redwings and discovered a male Ring Ouzel, how good was that. We watched the Ouzel for a while before a farm hand disturbed the flock and they all flew off, the Ring Ouzel did not return. 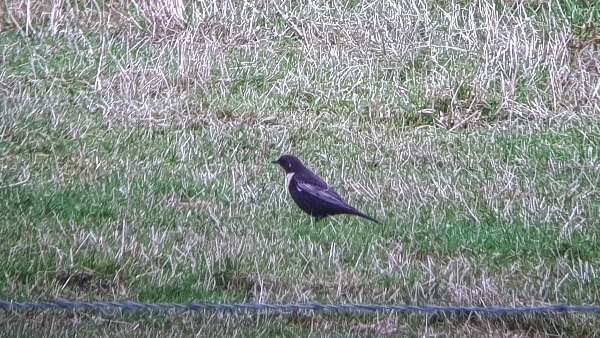 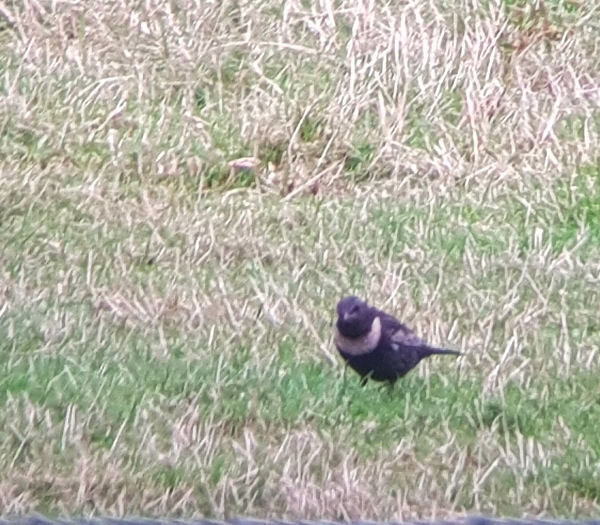 Our next encounter was a little bizarre and unexpected! As we walked through the gorse up towards the red and white tower called the Daymark we heard some ‘honking’ behind us. Looking up we saw three large birds flying towards us, I didn’t recognise the call and wondered what species of geese they were, soon it became apparent that they were not geese but swans, large swans. Three Whooper Swans flew directly over us and headed out to sea veering towards St Mary’s. What is more bizarre is that no-one else reported seeing them! 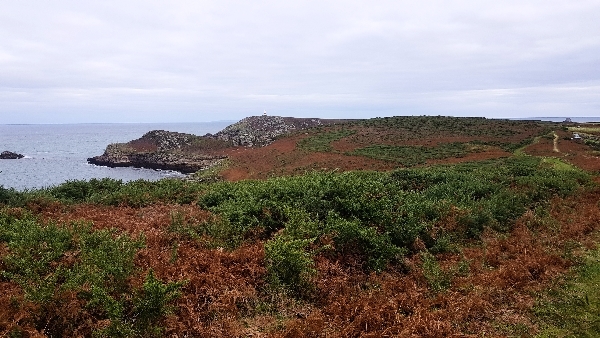 Because of the limited time we decided not to go all the out to the Daymark but took the coastal path towards Lower Town and the departure quay. A Ring Ouzel flew over us, we tracked it flying down te hillside below us until it landed in a distant tree, I digi-scoped a record shot. 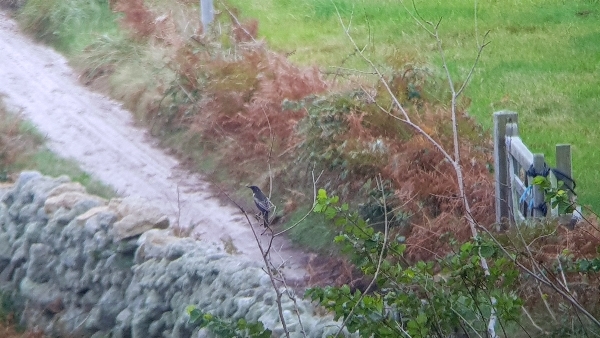 a distant Ring Ouzel, can you find it?

Next we heard a Raven ‘cronking’ and looking to the coast we saw two of them chasing a small falcon, then a Kestrel joined in chasing a Merlin around. The little falcon worked hard to avoid all three of its assailants. They eventually let it go as two Herring Gulls took over the chase, the gulls followed it for while but gave up pretty quickly.

In a belt of pines just above Middle Town we searched for flycatchers, but only found Goldcrests and Siskins. The small fields on either side of the main path through the island held many more Siskins, some Chaffinches, Greenfinches and Goldfinches and a lot more Redwings. 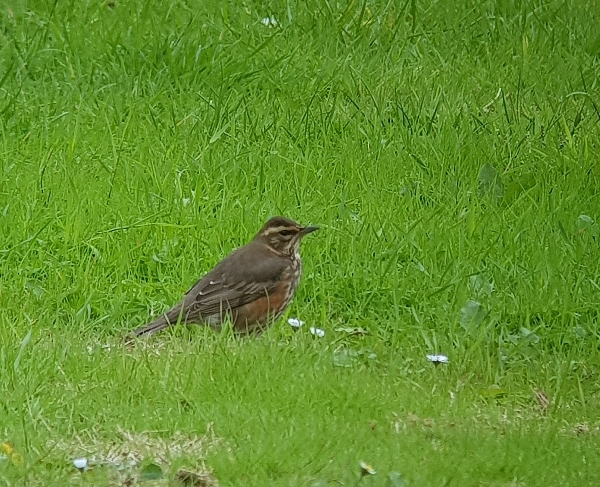 After meeting the other four group members and a hot drink at the café/pub we all walked down to the quay, passing one well groomed lawn, on which we saw four Chiffchaffs, with Song Thrushes and more Redwings. The tide had dropped very low but was turning as we arrived at the quay, scoping the beaches and small islands we picked out over 60 Sanderling, many Oystercatchers, a couple of Grey Herons, Curlews and Ruddy Turnstones. 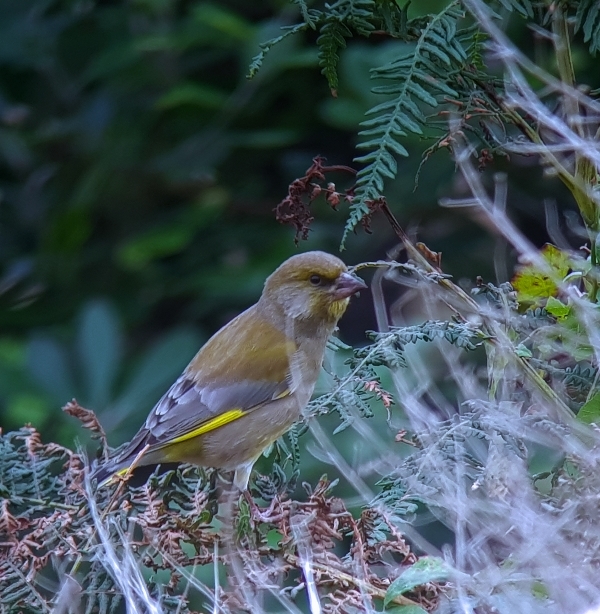 During the return journey we picked out Grey Seal, a few Gannets and three or four Mediterranean Gulls.

Once back on St Mary’s the other four members of the group went back to our accommodation whilst Cheryl and I marched up to Parting Carn Farm near the airport. The ploughed field where the Water Pipits had been seen over the last few days (including today) now also held a Woodlark and several Bramblings.

It took a while, even with directions from fellow birders, before I located the Woodlark in the bottom of the field, it was distant so we walked around to another gateway which was much closer. We had much better views from there and then added Brambling to Cheryl’s list, we saw three of them including a nice male. 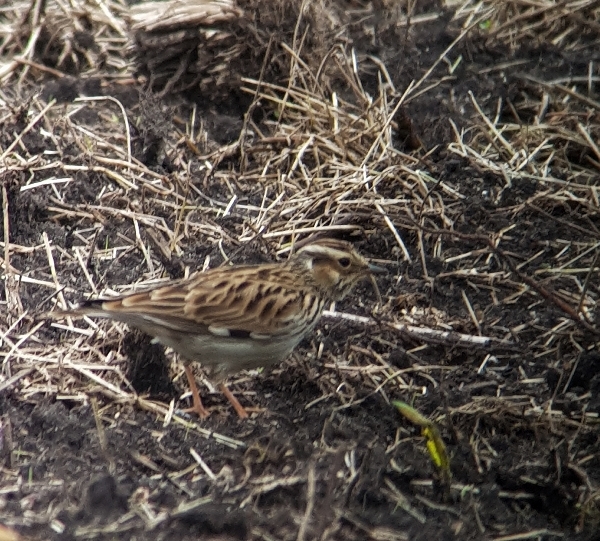 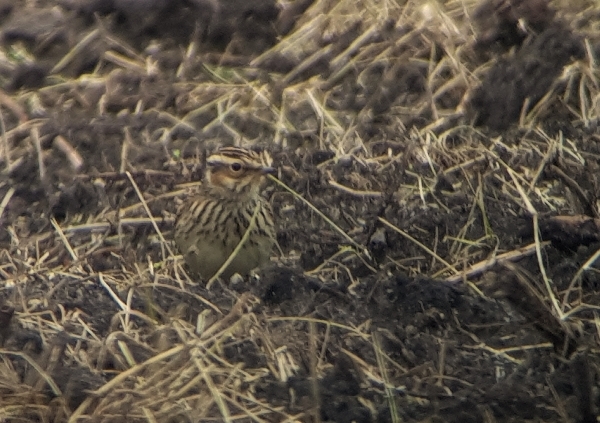 Other birds in the field included Black Redstart, Siskin, Chaffinch, Redwings, Robin, Song Thrushes, Blackbirds, Linnets and Meadow Pipits. The Water Pipit was not seen whilst we were there.

We walked back via Old Town, seeing Greenshank and Grey Heron in the bay before talking the coastal track round to Peninnis Headland. We saw very little and certainly not the Snow Bunting we had hoped for. A male Black Redstart was nice and plenty of Stonechats but that was all. 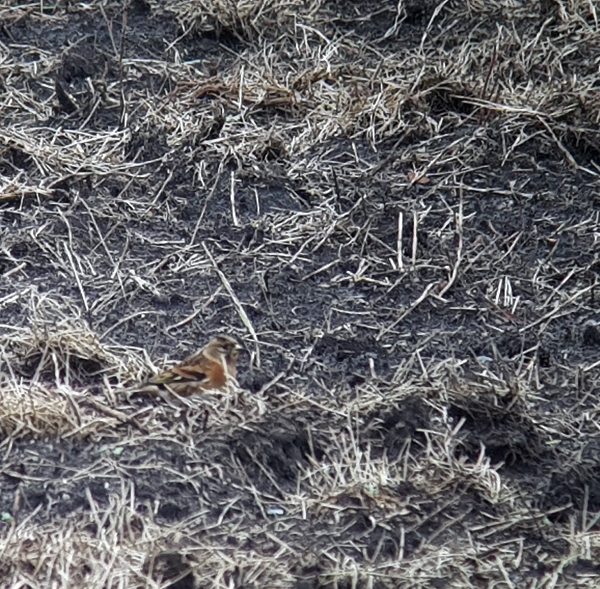 poor record shot of a Brambling, they were quite distant

In the evening we met up for dinner and afterwards Ian and Sarah joined us for the bird log. They had been on the pelagic and so their sightings went onto the Trip List.  Sooty & Manx Shearwaters, Great Skua, Kittiwake, Razorbill and Puffin. On their return journey they searched the shoreline and rocky island to find: Great Northern Diver (3), Eurasian Spoonbill (3), a Drake Eider and 9 Purple Sandpipers. 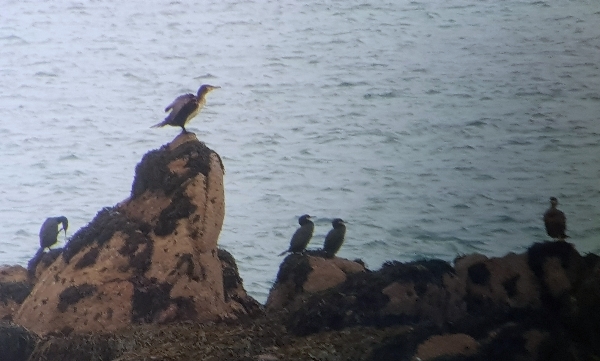 Tomorrow is our last day, we have booked taxi to take us to the top of the island so we can get to Watermill Cove earlyish to look for the Spotted Sandpiper that has been present all week.