DAY 7 OF THE DORSET AUTUMN TOUR

Having spent most of yesterday working the 'wrong end' of Portland, apparently we missed the opportunity of seeing Black Redstart, Long-eared Owl, Common Rosefinch and Yellow-browed Warbler down at the Bill, whilst we were walking around Verne Common and Chruch Ope Cove in the north and east! So, we went a little further afield today for a complete change of scenery and we hoped for some new sightings.

Lambert’s Castle, sits on the border of Dorset and Devon and is an ancient Hill Fort. It was built on top of a steep escarpment with outstanding views looking eastward back towards Portland. The plateau where the Castle sits is an excellent place to find migrant species that pass through.

It is a popular dog-walking venue, we saw many humans and even more dogs, but they did not distract us too much. The open woodland and abandoned orchards were fairly quiet but we did see some species, Eurasian Nuthatch called as we set off and small flocks of both Linnets and Goldfinches could be seen.

Small parties of Blue and Great Tits were joined by Coal Tits and we had fly-over Meadow Pipits, Pied Wagtails, Jay and a Mistle Thrush.But, generally the edge of the woodland was quiet, a mixed flock of Greenfinches and Chaffinches was noteworthy and a huge Long-tailed Tit ensemble past through.

On our return journey we walked along the top of the escarpment finding a couple of Yellowhammers and a Tree Pipit, a resident species and a migrant. Walking back to the car park we watched a Mistle Thrush fly over and land in a Rowan tree, I set the scope up and we enjoyed good views of it. Scanning through the finches in the same tree produced our best bird of the morning when we found a BRAMBLING, how good was that? 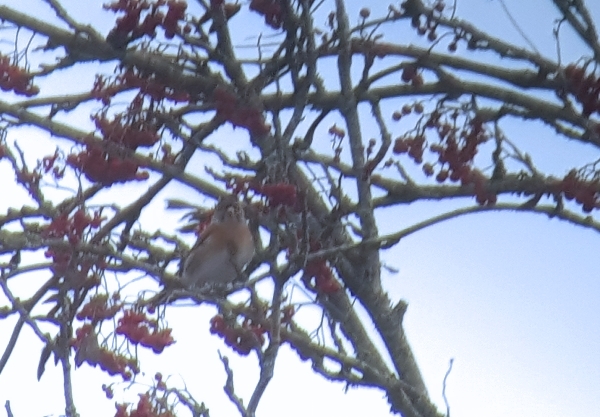 a very poor record shot of the Brambling, it was distant and it had the sun behind it

From Lambert’s we drove down into Lyme Regis and parked near a bridge over the river Lim, we immediately found a Grey Wagtail feeding around the rocky river bed, but failed to find our target bird the Dipper, so we walked down river, Nigel stayed behind and continued searching, my phone rang soon after, it was him with the news that he was watching a Dipper. We dashed back and soon we had great views of this enigmatic river-species. We saw it catch several Cadis fly larvae whilst we watched it after patting Nigel on the back. 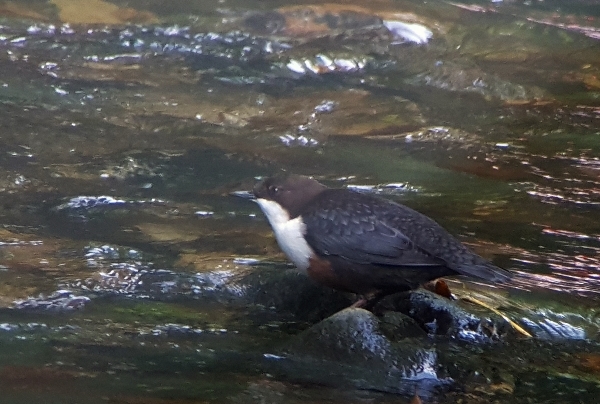 Has your birding day ever been disrupted by ‘Willy Wonka and the Chocolate Factory’ well ours was today. Apparently, they are making a sequel to this 1970’s movie on the Cobb at Lyme Regis and they were doing it today!! Which meant that the whole area was cordoned off, hundreds of actors and film crews were all over the place it was chaos. 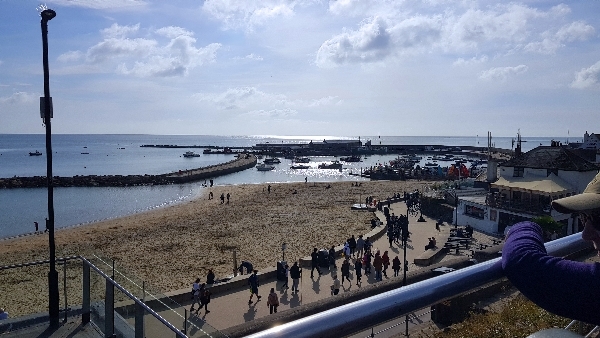 looking down to the harbour at Lyme Regis with the Cobb behind it. We scoped a few species on the break-water rocks at the end of the Cobb

So, we walked up the hill a little into the park gardens and scoped what little of the Cobb was visible, we saw Cormorant, Shag, Great BB Gull, a few Ruddy Turnstones and two Common Ringed Plovers. There was no sign of the Common Eider in the busy harbour.

Seaton Marshes was our next destination, we drove into the town centre of Seaton to visit a supermarket before settling down on roadside benches to eat our lunch. We overlooked the tidal River Axe, the water level was rapidly dropping as the tide was receding. We saw a Kingfisher fly past heading upriver, also a pair of Little Grebes, a few Teal, Wigeon, Curlews, lots of Herring & Great BB Gulls and a party of Black-tailed Godwits. 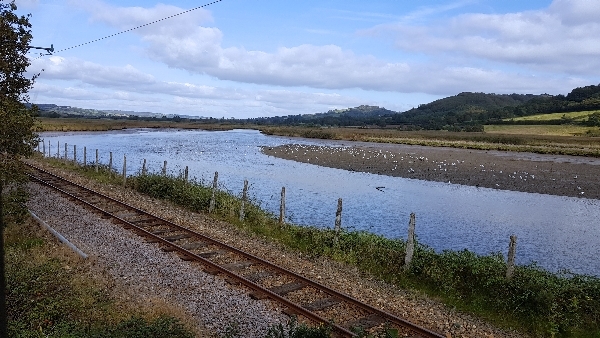 Driving round to the reserve where a number of hides overlook the area we were soon watching a number of species. We added Redshank, Greenshank, Common Shelduck, Dunlin and a single Common Sandpiper was new for the trip. A large flock of Black-tailed Godwits sat fast asleep and a couple of Common Snipe fed behind a party of Lapwings.

We picked out a single Mediterranean Gull before moving onto to the other hides. Nothing new came from our visits to other hides so we decided to drive back to Portland for the late afternoon SHORT-EARED OWL show, apparently up to four birds were showing yesterday evening. 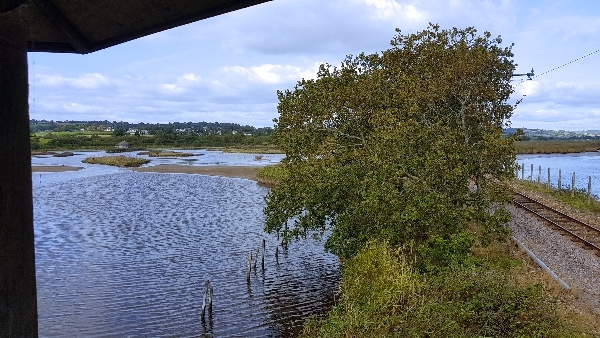 looking into Black Hole Marsh from the tower hide

After a traffic hold up in Abbotsbury, caused by a huge articulated truck trying to negotiated an almost 90 degree bend in the road, it failed and had to reverse out of the village, what a mess!  We were held up for 20 minutes before setting off. 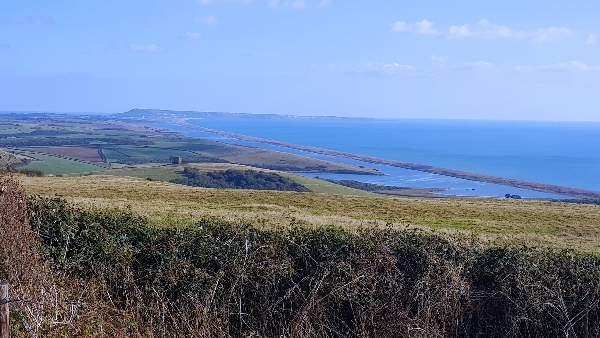 We arrived in the top fields at Portland Bill around 4:30pm and stood in a prominent position overlooking the set-aside fields running down towards the Bird Observatory, a dozen or so other birders we also waiting in anticipation.

Although we saw two Short-eared Owls the views were not that great. The first one was distant and very short, the second one was much closer by also very short, a bit of a disappointment after a 90 minute long wait in a chilly breeze. We did however see several Kestrels, a Sparrowhawk, some Ravens and a Wheatear. 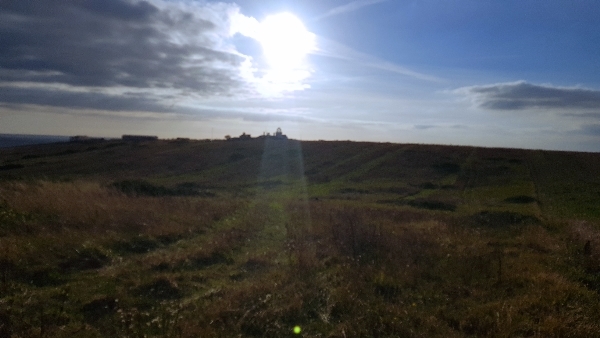 our view of the Top Fields around 5:30pm were two Short-eared Owls appeared later

It was a dash back to the guest house to quickly get changed for a dinner booked at 7pm, we were 10 minutes late, but all went well.