WEATHER: dull and overcast all day, but dry. Windy all day.

Our last day had arrived and we intended to make the most of the our last few hours on St Mary’s, all eight of us boarded a taxi minibus to the top of the island, getting off at Watermill Lane. We hoped to see the Spotted Sandpiper wich had been showing well yesterday.

Watermill Cove was quite sheltered and with a receding tide the conditions were right for our search for the sandpiper. We saw Robins, Rock Pipits, Oystercatchers, Curlew and gulls but nothing else moved in the cove.

Walking along the coast path we had great views of a stretch of rocky coastline adjacent to Watermill Cove and still could not see the sandpiper, we found a couple of Black Redstarts and six Whooper Swans flew along the channel towards Bryher but nothing else was seen. 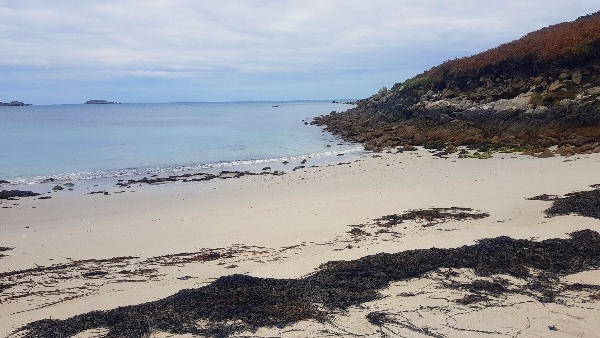 We arrived at Pelistry Bay and searched there too but nothing different was seen, we gave up after 90 minutes of searching, the wader had gone!

As we walked back inland heading back towards Hugh Town it became apparent that a large passage of finches was occurring, we saw flocks of 50-100 birds dash over us on several occasions d reports from elsewhere talked of flocks of thousands. The birds were mainly Chaffinches, Siskins and Bramblings. 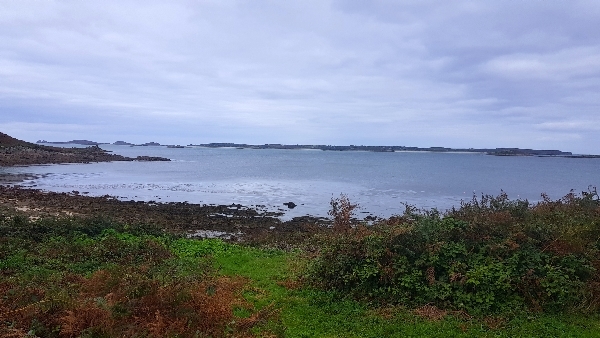 view from the coastal path looking back to Watermill Cove

At Parting Carn Farm the Water Pipits had been seen once again so we tried for those joining about 20 other birders we searched the ploughed field. Unfortunately for us we arrived just as an aircraft took off from the airport and most of the birds scattered, many not returning. We did see lots of Chaffinches, Meadow Pipits, Redwings, Song Thrushes and Blackbirds but not the Water Pipit.

A couple fields near Porth Minnick was another area were the Water Pipits had been seen, up to three of them were now being reported on the island. We arrived at the correct place but not a single pipit of any description was seen there. 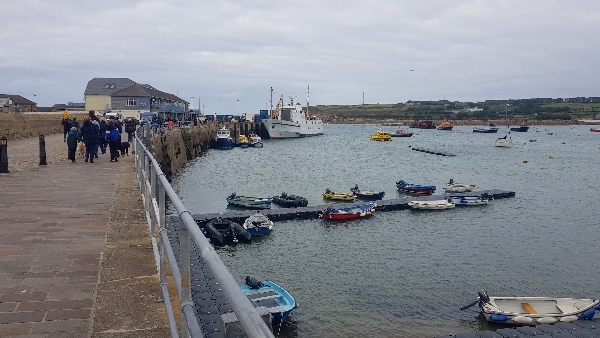 We walked back to our accommodation to collect our carry-on bags and the proceeded down to the quay where we boarded the Scillonian Ship for our journey home. We had a pleasant trip back, it was windy and a little cold but you could find shelter and a good place to sea-watch throughout the trip. Apart from Gannets and Kittiwakes not many species were seen. One Sooty Shearwater and two Great Skua were in fact our sum total. We did see at least three pods of Common Dolphin before we docked, in the dark at 7pm. 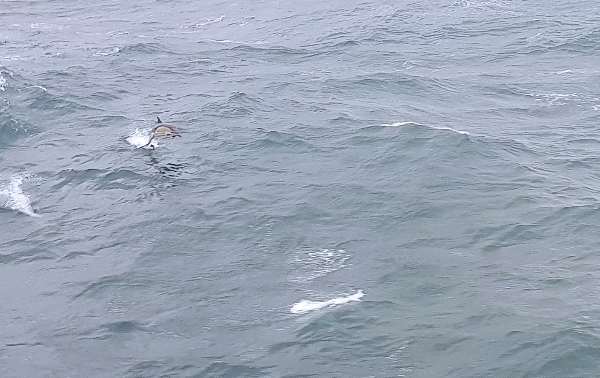 Common Dolphin - my only picture from on board the Scillonian

Nigel was there to collect us in the minibus and drove us to our hotel in Cramborne, we ate a most welcomed dinner.

The trip wasn’t over just yet for our three Americans, Cindy, Joe and Cheryl. Nigel and I shall be taking them to London, Heathrow tomorrow with some birding along the way.