WEATHER: another wet and windy morning, brighter later with some sunshine.

We had an early breakfast because we thought we were catching an early boat to St Martin’s, however, the early boat was cancelled because of the weather and rescheduled for 10:15. We had time to kill, so we walked down into town and scanned the beach at Porthcressa. There was nothing on the beach as people were walking dogs along it and out in the bay we saw the usual gulls, shags and Oystercatchers, a Grey Seal was ‘bobbing’ near the shore, it appeared to be asleep with its eye firmly shut! 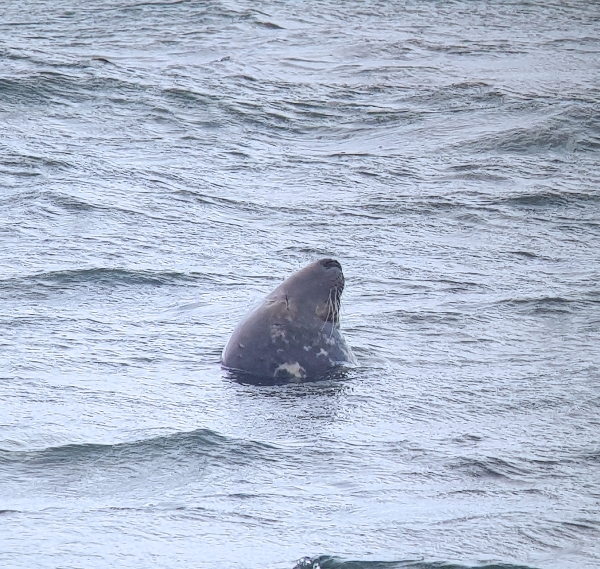 We then walked up onto the Garrison to look for sheltered areas of trees where birds might linger, it was hard to find such a place with the swirling wind and driven rain so we gave up and walked down to the harbour quay to wait for our boat to St Martin’s Island.

This was our last boat trip of the Tour so we decided to visit St Martin’s, not many birds ad been reported but recent sightings of Red-backed Shrike and Common Rosefinch were enough to encourage us to make the journey.

We had strong winds of 20-30 miles an hour for most of the day, however the sea state remained relatively calm as it is sheltered by the surrounding islands, we saw Mediterranean Gull, Sandwich Tern, Shag, Gannets and Oystercatchers during the boat trip, it took 30 minutes to get there. 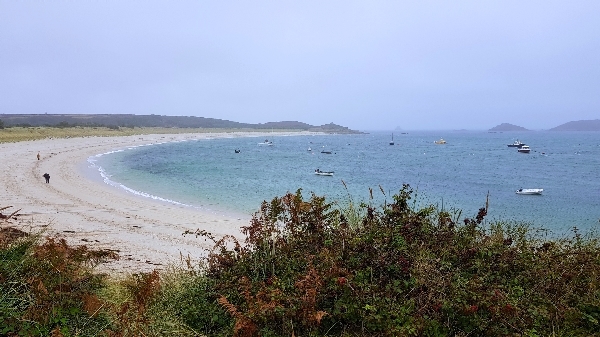 From the jetty near Lower Town we scanned the lovely beach area and found our first Sanderlings of the trip with many more Oystercatchers and a few gulls lingered in the distance. We then walked round to the Cricket Pitch, which was not far from the quay, out on the grass we saw a single Northern Wheatear, six Meadow Pipits, a single Rock Pipit and three juvenile White Wagtails, I spotted a Stonechat in the scrub nearby. 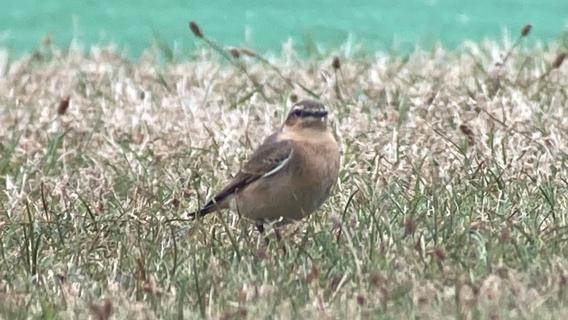 From the edge of the pitch we were able to scan the disused ‘daffodil’ fields which we covered in weeds that were now in seed. A large flock of Goldfinches were feeding on the seeds and were joined in the field by some Linnets, lots of House Sparrows, a flock of Starlings, a few Blackbirds, Dunnocks and a Song Thrush. We sifted through the flocks looking for a Rosefinch but we never found one. 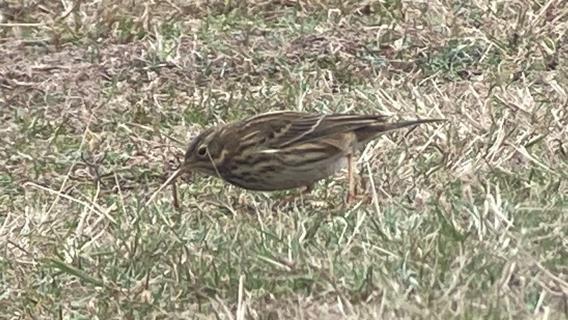 Meadow Pipit on the cricket pitch taken by Tim Oldman

The rain intensified as we walked along the main track, driven by a strong wind it came at us almost horizontally. We found shelter along the way behind the large hedges of pittosporum bushes. We found two more Northern Wheatears as we ambled along, taking shelter now and then as the rain varied in its intensity.

Another weedy field held a few more Goldfinches with many common garden birds in with them, the House Sparrow populations on St Martin’s is very high. We walked down to a local garden waste tip which was in an old quarry, it was sheltered there but we only saw common birds and a few ‘black’ pheasants. 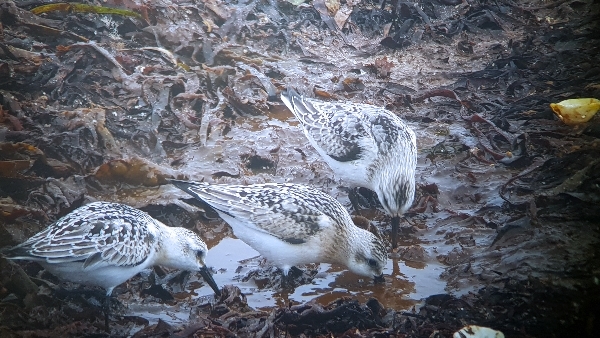 3 Sanderling on the beach at the quay

We reached the Camp Site were the Red-backed Shrike had been seen over the last few days, the camp site had one tent in it!! Many areas were sheltered from the wind and we suspected that the Shrike would be favouring such a place. After an our of searching the rain came down once again so we sheltered behind a hedge and settled down to eat our picnic lunch.

After lunch we took another walk towards Higher Town and circled back along a track near the beach where a bank of bracken and scrub provided habitat that the shrike might prefer. We drew a blank once again and spent more time sheltering from the rain than actual birding. As we walked away from the Camp Site it suddenly brightened up and the rain stopped, this encouraged us to take one final look back at the camp site.

We drew a blank once again, but as we walked away I spotted the Shrike tucked up in a hedgerow, hooray!! All of the group got see it before it flew out of sight. When then had short glimpses of it as it flew down to the ground to pick up some insect before returning to a perch not visible to us. Finally the bird disappeared over a hedge and was lost to sight for good. 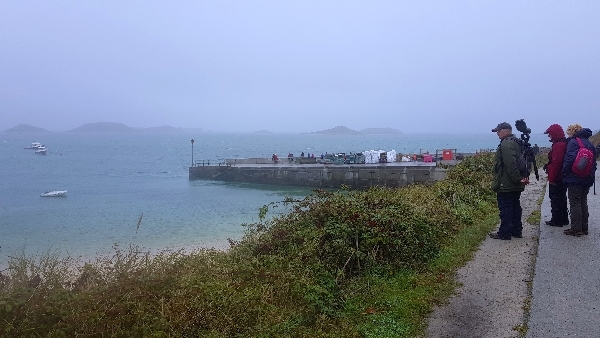 the quay in misty swirling rain, not nice to be out there today

We marched back to the quay and before making it to the jetty we had a quick second-scan of the cricket pitch and the ‘bulb’ fields, the rain was only very light and before we boarded the boat it had stopped.

As we pulled away from the quay the captain warmed us that we were in for a wet and rocky ride, he wasn’t joking. Past experience had taught me to sit nearto  the pointy end of the boat and this is what we did. Many people in the back of the boat got a soaking from sea-spray, it was hilarious, a lot of them were holiday-makers wit inappropriate wet-weather clothing, they were wet through, they had a good laugh about it.

Back on St Mary’s all of the group went back to guest house but I walked down to Lower Moors to see what had come in. Apparently two Pectoral Sandpipers had dropped in for a few minutes before flying off to Higher Moors. The sandpipers had long gone by the time I got there, I spent 30 minutes alone in the hide watching the local Moorhens and a very obliging Water Rail. I scanned the muddy fringes around the reedbeds looking for Snipe without luck. 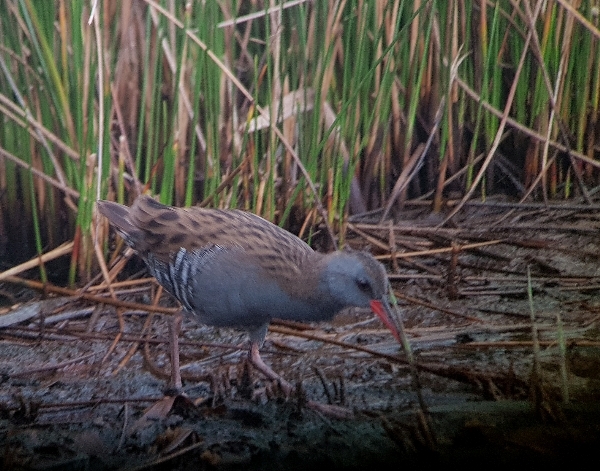 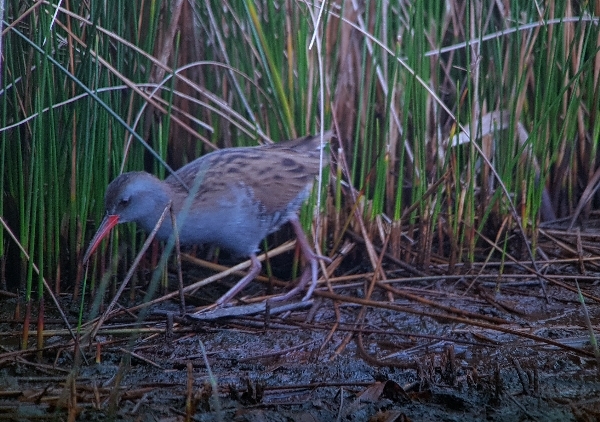 I got back to guest house around 5:30pm and received the news that a weather warning had been put out for Saturday, all flights had been cancelled in advance and it was highly likely that the ship would not sail!!! We made a joint decision to cut the tour short by a day and leaving for home tomorrow and rebooked the ferry accordingly.