My third visit to this wonderful area in 10 days! Today I collected Jane from along the coast near Sabinillas before driving to La Janda.

We met at 8am just as the sun was rising producing beautiful pink clouds, changing to reds and finally purple and blue. This gave way to a lovely clear sky, it was a little windy at Tarifa but when we arrived at La Janda it was dead still. A fantastic morning visit began as we drove to the central track, we watched Zitting Cisticola, Common Stonechat, Eurasian Linnets, Corn Buntings and a flock of 28 Skylarks along the first part of the track. Further along the track we had good views of White Stork, Northern Lapwing, Cattle and Little Egrets and some distant Common Cranes. 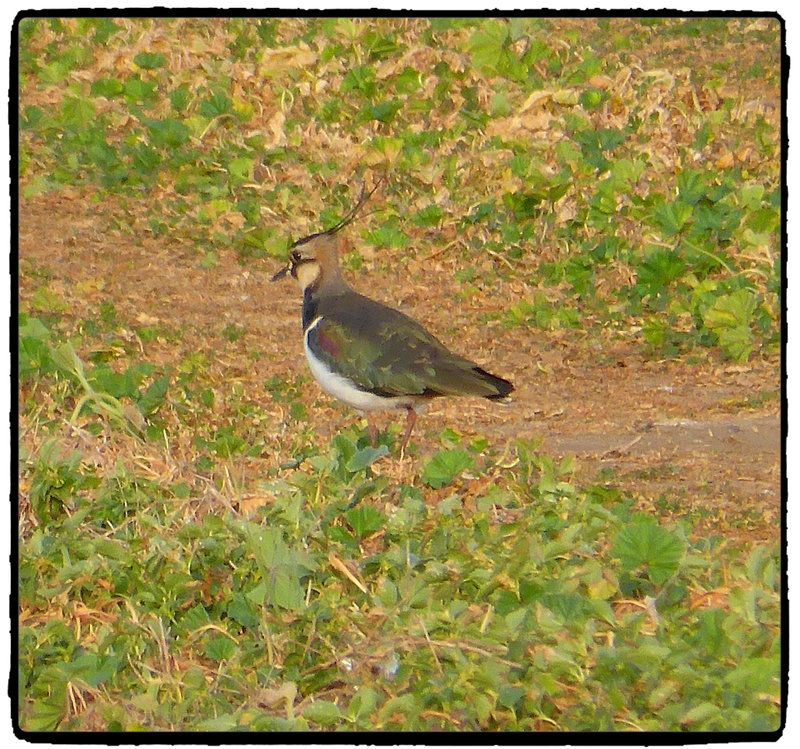 Northern Lapwing......a little closer than the other day but I still can't digiscope having left my camera in the UK

We parked at the beginning of the central track and began birding in ideal conditions, lovely morning light, not a whiff of air, I quickly found a Bluethroat but it disappeared into the reeds before Jane got to see it, luckily it was a female not a colourful male. We waited and searched but it never reappeared, however we did enjoy views of Water Pipit and Green Sandpiper.

Just before we moved on I searched a second ditch and right at the far end was another Bluethroat, this time it was a male and Jane had excellent views in the scope. It was much too far away to photograph and we could not approach it unseen, so we enjoyed it in the scope.

The sky filled with Common Cranes, a couple of hundred came towards us as they delivered their evocative calls, sounding somewhat like choking geese. Marsh Harriers were very prominent too and a couple were very obliging and came very close to the car, it was nice to see the colourful males as well as the numerous chocolate brown females.

just after sunrise at La Janda looking back towards Tarifa through the 'forest' of windmills.

As we made our way along the central track we stopped to look at lots of herons, storks and egrets, one stubble field held over 50 Common Snipe, 100+ Northern Lapwings and countless White Wagtails, Meadow Pipits, Linnets and Goldfinches. The rice paddy next to this field was flooded and I counted 23 Greenshanks in there with a single Green Sandpiper and likewise a Common Sandpiper. Whilst looking at a few more Common Snipe along an embankment I saw my 3rd Bluethroat of the day, but again it disappeared before Jane got a good look at it.

Apart from lots of Marsh Harriers, Common Buzzards and a few Common Kestrels raptors were hard to find, no big eagles this time! A fly-by Great Egret was nice and several Purple Swamphens looked terrific in the bright sunshine 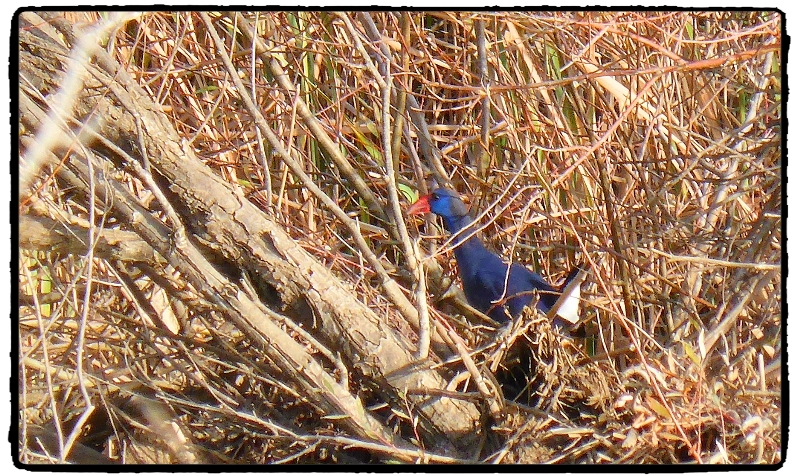 From La Janda we made our way towards Benalup passing the 'smelly farm' where the usual throng of Jackdaws mixed with innumerable feral pigeons, it is also an area where Common Pheasants, introduced for hunting, are fed from hoppers whilst native Rabbits, Red-legged Partridges and Common Chaffinches steal as much as they can. 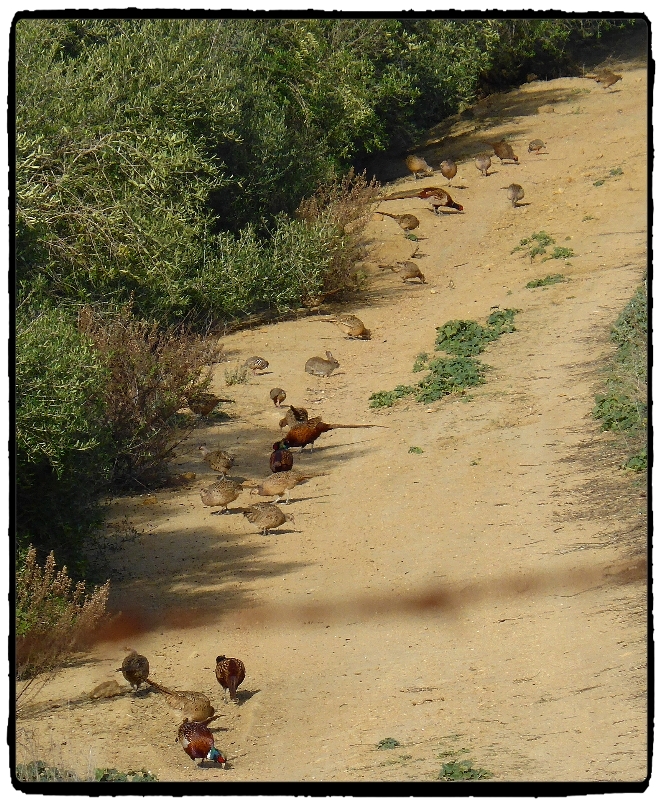 a farmyard menagerie! Common Pheasants, Red-legged Partridges and wild Rabbits share grain, if you expand the picture you can just see Chaffinches too!

Our next sighting was somewhat out of context as we watched a Hen Harrier hunting in open woodland! not a usual habitat you would expect to see one in. A large mixed flock of Serins and Linnets were feeding along the fenceline as we drove towards Benalup.

We stopped to buy our picnic lunch in Benalup and drove to the wide open expanse of agricultural land at Cantarrans to eat it, I kept my eye out for any sign of Little Bustard which is still supposed to breed in this area but couldn't see any, Ravens and Common Buzzards was all.

Our last Port of Call was Barbate, we stopped first at the river to look for wintering Caspian Terns of which there were none, however, a very low tide left large areas of exposed mud which was covered in birds. We saw a good selection of waders including: Dunlin, Sanderling, Grey Plover, Ringed Plover, Redshank, Greenshank, Black-winged Stilt and Curlew. A large flock of Sandwich Terns were roosting with the usual selection of gulls. 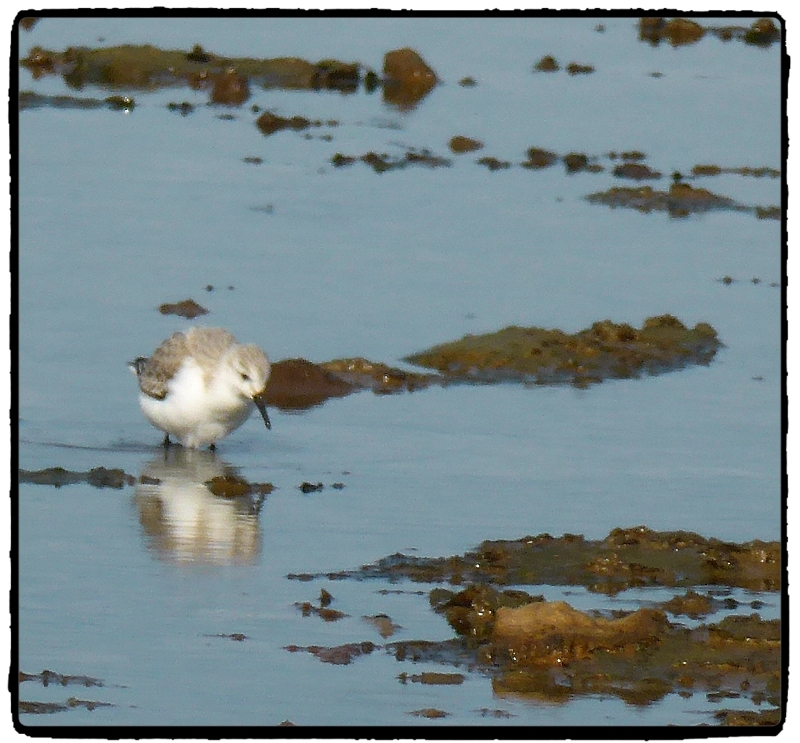 As we drove across the bridge to the marshland we saw a Whimbrel and more Sanderling. Our last hour was spent driving around the huge pools at Barbate Marshes where we watched a good number of species. Greater Flamingos, Eurasian Spoonbills, Audouin's Gulls joined masses of waders, mainly Dunlin, Sanderling and Black-winged Stilts. The scrubland and bushes along the waters edge held many Common Chiffchaff, Corn Buntings, Crested Larks, White Wagtails and Linnets and in the fields behind us we noted flocks of Skylarks and more Goldfinches than you can shake a stick at.

The sun began drop in the western sky and so did the temperature so we decided to call it a day, we stopped a couple times on the way back to take scenic pictures of Gibraltar and the across the Strait to Africa. 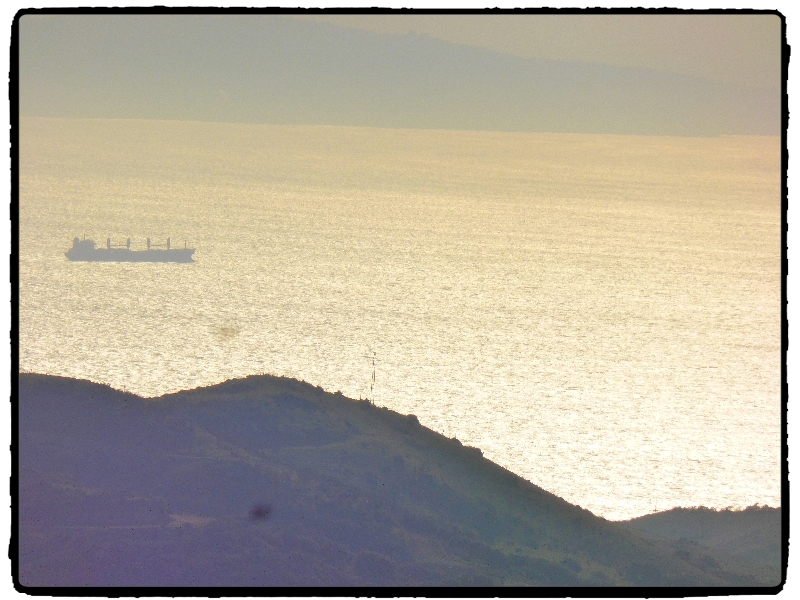 looking across the Strait, you can just make out Morocco in the background