I met up with Lis at 8am the edge of the village for her second day trip with me, it was just getting light. We had a clear blue sky and a light westerly wind.

For our first venue I chose the Marchenilla Track near San Pablo as it was on our way as we headed for the coast. It wasn’t as  good as recent visits, not many migrating birds to see except for a huge flock of House Sparrows that held several Spanish Sparrows. Further along the track we found Woodchat Shrike, Common Stonechat, a few Crested Larks and a couple of Black Kites.

We then passed through Castellar noting White Storks on their nests and both Common Kestrel and Common Buzzards on pylons.

It was 10am by the time we reached Algorobbo Watch Point and already a crowd of birders were there, but they weren’t watching much. Soon the raptors began to appear of the distant ridges, many Honey Buzzards rose from the forests in groups of 30-50, whilst Booted Eagle, Black Kite and Short-toed Eagles drifted over in singles. A few Barn Swallows and House Martins came over but no Bee-eaters passed. As it warmed up then more and more birds came up, lots of Griffon Vultures circled and I counted over 200 Honey Buzzards in total. 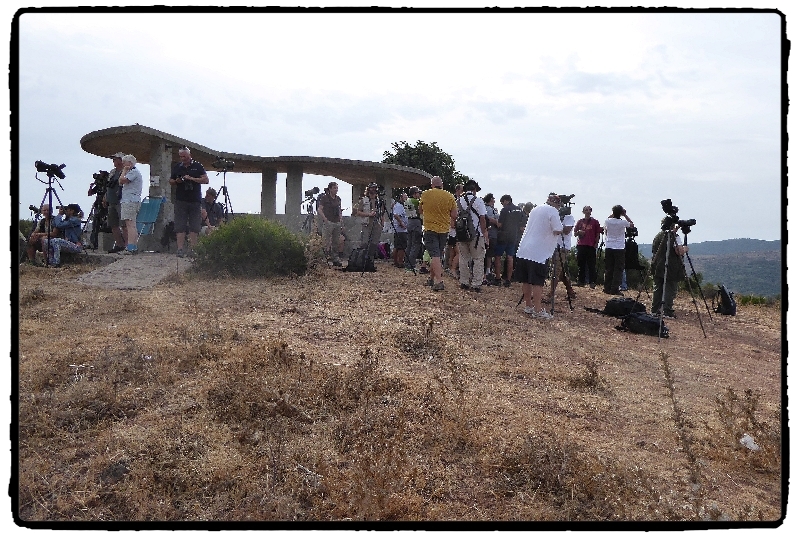 La Janda wasn’t as packed with birds as it had been over the last couple of weeks but there was still plenty to keep us occupied. Hundreds of White Storks loafed about in the rice fields and several Harriers could be seen at ant one time, Marsh Harriers out numbered  Montagu’s by about three to one. Lots of Common Stonechats and flocks of Corn Buntings decorated the fence-lines and the white dots of hundreds of evrets, both Cattle and Little could be seen for miles. 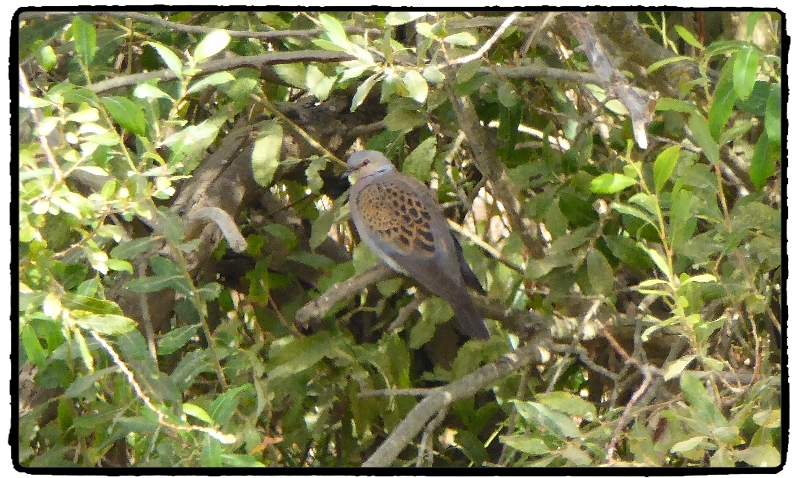 Our slow trek along the central track produced good views of hundreds of Spanish Sparrows and a nice sighting of a Peregrine Falcon. Millet was being harvested across on the other side of the canal, a conservative estimates was of two thousand birds in the field with the harvester. They were mainly Cattle Egrets, Jackdaws, Common and Spotless Starlings, White Storks and Grey Herons, it was a fantastic spectacle. 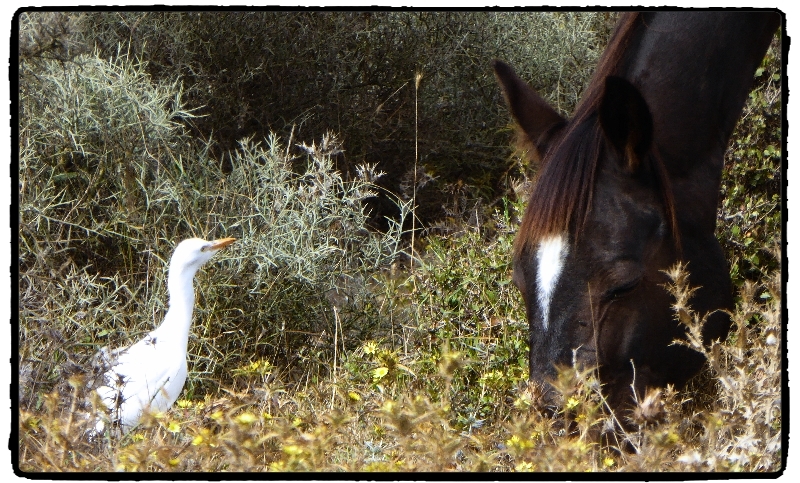 A solitary   CATTLE EGRET  - doing what egrets do.

Along the Benalup track we stopped at the ‘nightjar roost’ but only found one bird there, we noted Common Pheasant, Grey Partridge, Lesser Kestrel and more Jackdaws along the track. We also stopped at a laguna where a couple of hundred Glossy Ibis fed with Little Egrets, Black-winged Stilts and Green Sandpipers. Huge swirling masses of White Storks could be seen high up on the thermals they went so high they were lost to sight. 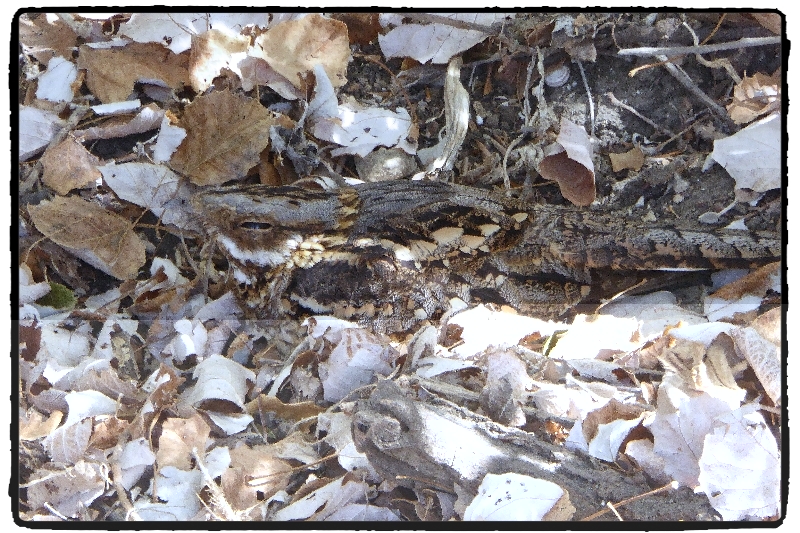 It was now getting hot, around 30C, so we set off for the coast at Barbate, we made a brief stop at Montenmedio Golf Complex to look for Bald Ibis without success, so we arrived at Barbate around 2:30pm.

Ae stopped at the bridge on the edge of town to view the river Barbate and its marshland, several  Common Greenshank joined a single Oystercatcher, Common Redshank, Dunlin, Sanderling and a few Ringed Plovers on the exposed muddy banks and lots of Yellow-legged and Lesser Black-backed Gulls were dotted all over the marsh, but there was no sign of the ‘Yellow Billed’ Terns or any other terns that were present last Thursday. 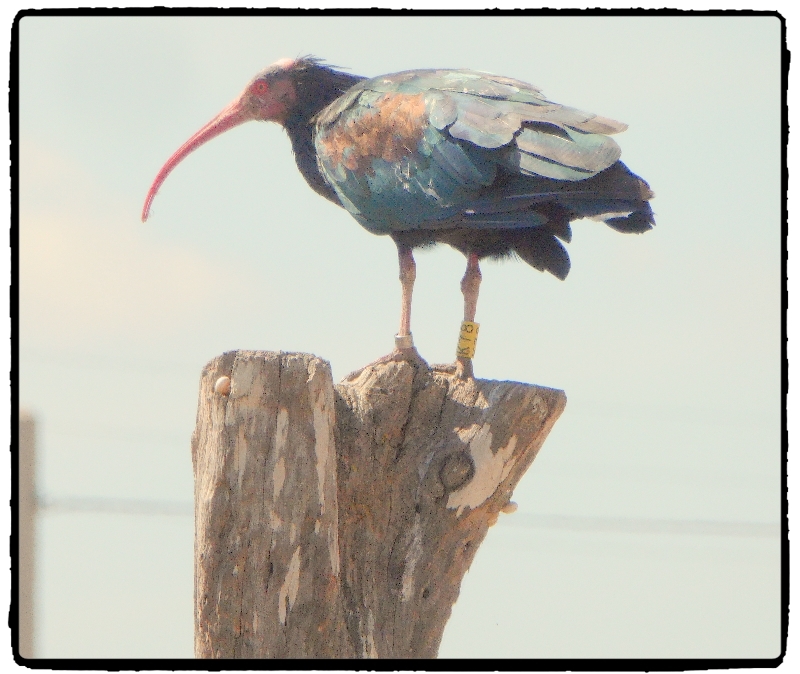 At the entrance to the main marsh we found 14 Bald Ibis, bizarrely some were sitting on power lines with pigeons and starlings. The marsh itself was covered in birds, hundreds of waders, gulls, egrets, flamingos and terns. We logged: Ringed and Kentish Plover, Grey Plover, Red Knot, Common Greenshank, Common Redshank, Green Sandpiper, Black-winged Stilt, Sanderling, Dunlin, Curlew Sandpiper and Ruddy Turnstone. Further along the track we found 12 Stone Curlew, 25 Eurasian Spoonbill, 50+ Audouin’s Gulls and a dozen Grey Herons.

The afternoon light was just fantastic but it was approaching 5pm so we had to leave, a couple of Whinchats on the fence was a nice find as we drove off the marsh. Our journey home was punctuated with a stop at the Mirador de Estrecho where the light was truly exquisite, Morocco was so clear across the Strait of Gibraltar. 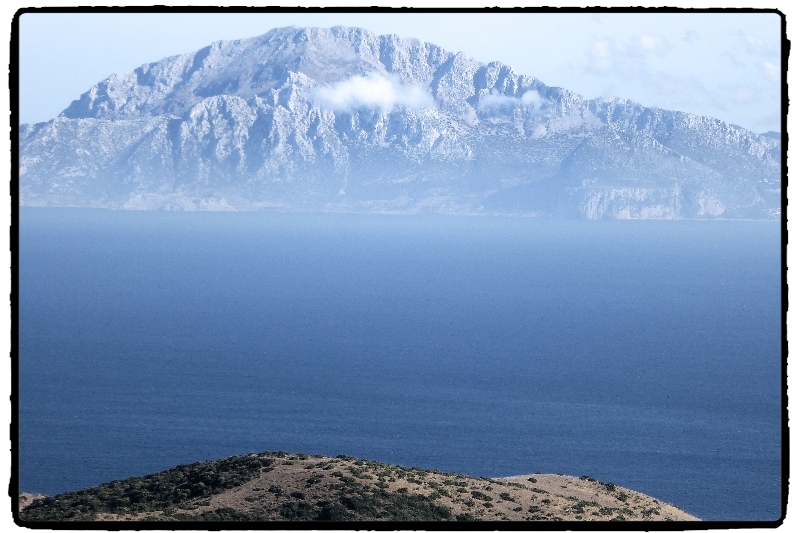 LOOKING  ACROSS THE STRAIT FROM THE MIRADOR DE ESTRECHO TO MOROCCO

We made a second stop at Sierra Crestellina near Casares, again we marvelled at the superb light whilst admiring the soaring Griffon Vultures. We were back at 7pm, it had been a full day but extremely enjoyable in some fantastic weather.