Bruce, Joanna, Hamish & Vivienne are attending an ART & CULTURE residential course based here in Gaucin  (http://www.artandcultureandalucia.com/) and part of the course includes a natural history morning with a local guide. Today 4 of the current group came out with me for a morning to see some of our local wildlife and hopefully some migrating birds.

We left the village at 8:30am and headed down the Guadiaro Valley to San Pablo and shortly afterwards we turned onto the track that leads the tiny village of Marchenilla. A Little Owl provided our first entertainment quickly followed by a Common Stonechat, both were seen from the car near San Pablo. 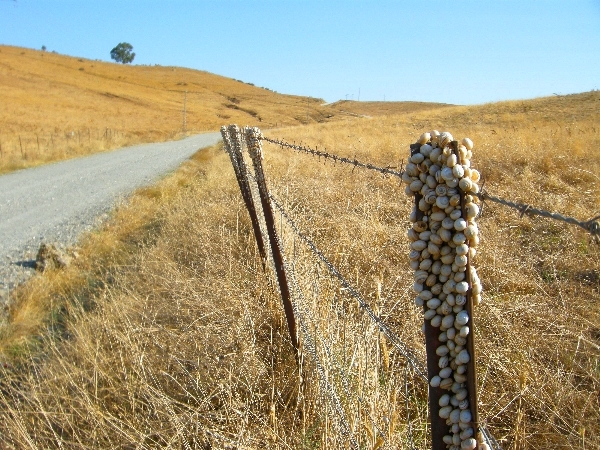 Once on the track we made very slow progress on foot because there were so many things to look at, my guests were very interested in the aestevating snails that were piled high on the top of each fence post and the warblers that were feeding in the track-side scrub. Willow Warblers and Common Chiffchaff were delicately picking off tiny black-fly from the stems of the wild fennel whilst Sardinian Warblers were seeking out the ripened black berrries. 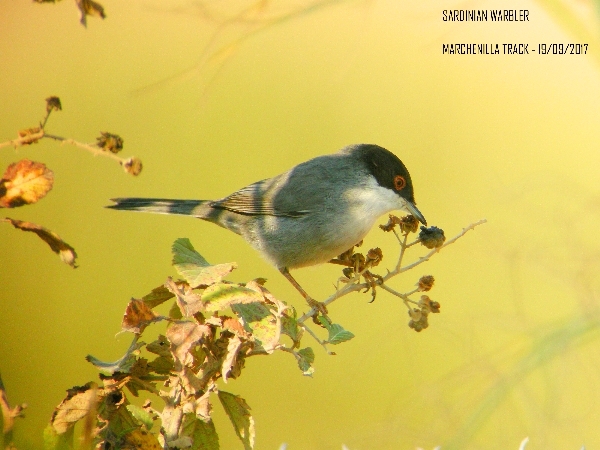 Flocks of Collared Doves, House Sparrows, Goldfinches and Eurasian Linnets kept us on our toes, we had lovely 'in-the-scope' views of a lot of them. More and more Common Stonechats appeared as we progressed along the track, we also had nice sightings of Serin, Corn Bunting, Common Kestrel and Crested Lark.

As the landscape opened out into rolling hills of very dry pasture we could see more skyline and as a consequence more birds of peey appeared, my group were enthralled by the Short-toed (Snake) Eagle but rebuked me for not arranging some "snake catching action".

We mounted the hill crest about half-way along the track giving us a wide panoramic view of the hills around Jimena de la Frontera, we immediately started to see birds of prey. First one or two, then five or six until large groups of Griffon Vultures formed spiralling columns, rising on the thermals,  called 'kettles', well over fifty birds could be seen. 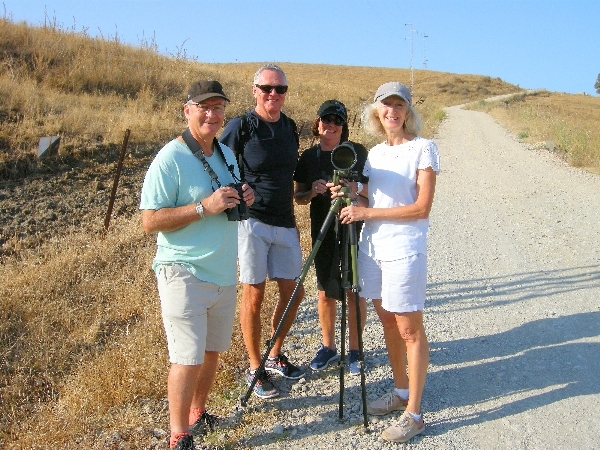 My charming group of, at the time, Robin Strokers. Hamish, Bruce, Joanna and Viviene

A quick stop for coffe was made in the roadside venta at Marchenilla before we drove the short distance to the Rio Hozgargante where we hope to see a few woodland species. A Eurasian Jay flew off as we arrived at the almost dry river, only small pools can be seen from the ford on which we parked. A Firecrest, the smallest bird in these parts, showed very well and we had short, fleeting views of a Cetti's Warbler but it was raptors that kept us entertained for the next thirty minutes or so. Dozens of birds could be seen high above, but one Booted Eagle in particular showed extremely well just before we left. We also noted a Lesser Emperor Dragonfly, Meadow Brown and Small White butterflies.

Our return journey was punctuated with short stops, we watched a group of Lesser Kestrels over the hillside and Joanna pointed out an Iberian Grey Shrike perched on the power lines.

My group all graduated from 'Robin Strokers' to 'Bird-watchers' with their enthusiastic approach and keen observational skills, they were all pretty good at picking birds up in their own or my binoculars, but as I left them back in Gaucin I reminded them all that it wasn't good practice to find the birds before the guide does!