Dawn and I met up with John, Mary, Henry and Sue on the edge of the village at 8am for our day out to the small lakes around Campillos, we loaded up into two car and set off.

Just as we approached the Campillos road on the far side of Ronda I was forced to stop for coffee and toastado at a roadside cafe.  Next we stopped just after the village of Cuevas de Bucerro to look for a pair of Bonelli's Eagles, the nest was easily visible but no-one was at home. We did find Crested Lark, Corn Bunting, Rock Sparrow, Alpine Swift, House Martin and Barn Swallow. 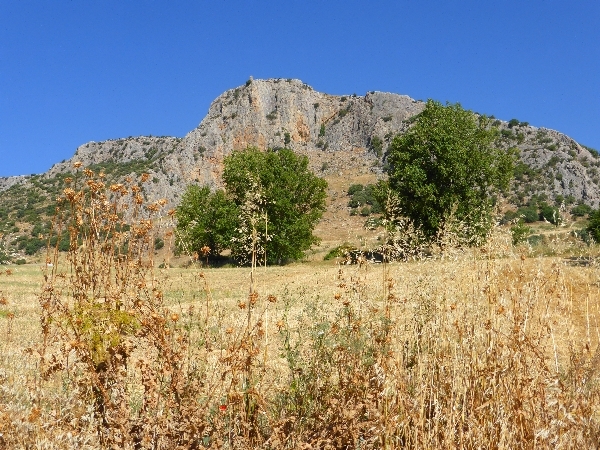 Looking from the road towards the Bonelli's Eagle site

Not long afterwards we arrived at the first of the Lagunas near Campillos, called Capacete. It was covered in birds, hundreds of Eurasian Coots were joined by dozens of Greater Flamingos and much smaller numbers of Common Pochard, Red-crested Pochard, Gadwall and Mallard. After a great deal of searching we found our target bird the WHITE-HEADED DUCK, a couple of males looked splendid in their summer plummage with their birght blue bills. 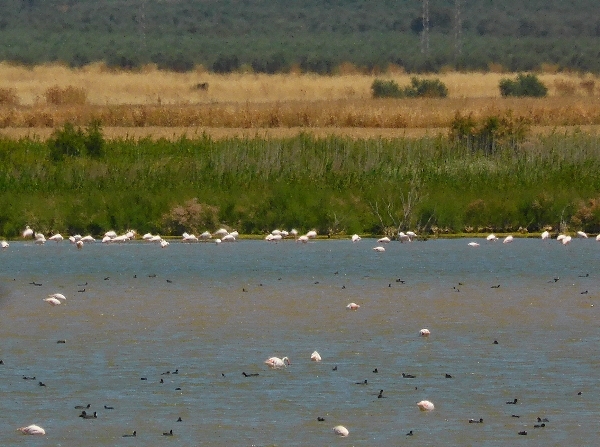 Coots and Flamingoes at the Laguna Capacete

Other species present were three species of Grebes,  Great-crested, Little and Black-necked, all three seemed to have bred here with plenty of chicks floating around. We also saw Common Moorhen, Cattle Egret and a couple of distant Gull-billed Terns. Above us swarms of swifts were hawking insects and several Alpine Swifts were noted, they came quite close us at one stage. 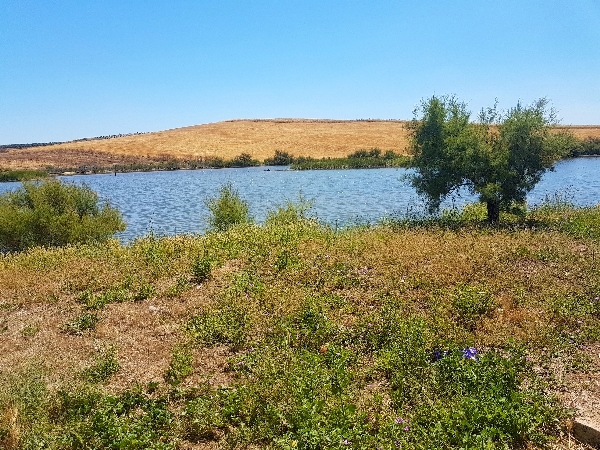 We by-passed Laguna Salada to visit Laguna Redonda which had a very convient viewing-blind with seats. It was marvellous there we spent a good hour enjoying close encounters with a good number of species. Gull-billed Terns were feeding by swooping down and skimming the water like 'Skimmers' do, Black-headed Gulls either loafed on the small islands or fed from a sitting position on the water. Greater Flamingos looked regal, high and mighty as the much small Coots, ducks and gulls swam around there long thin, pink legs. 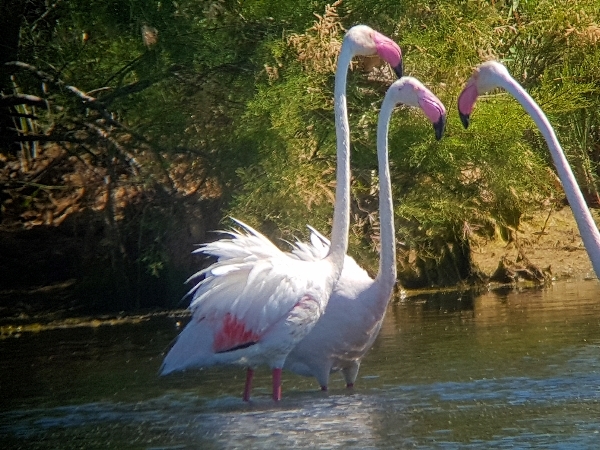 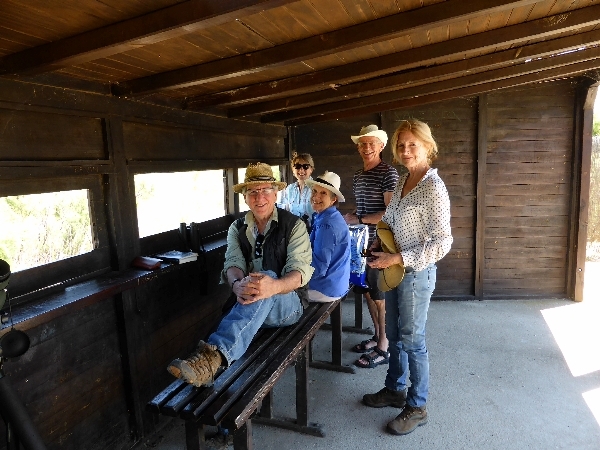 my happy group of companions - also with pink legs!

We added Northern Shoveler, Black-winged Stilt and not much else to the day list before we left for our main venue, the much larger Laguna Dulce. From a very similar hide to that of Laguna Redonda we saw many more birds, most of them were of the same species but there were far more of them. We estimated there to be at least a thousand Eurasian Coots!! Perhaps one or two were of the Red-knobbed variety, we never had time or the inclination to sift through them, besides, the heat haze and light was all wrong. 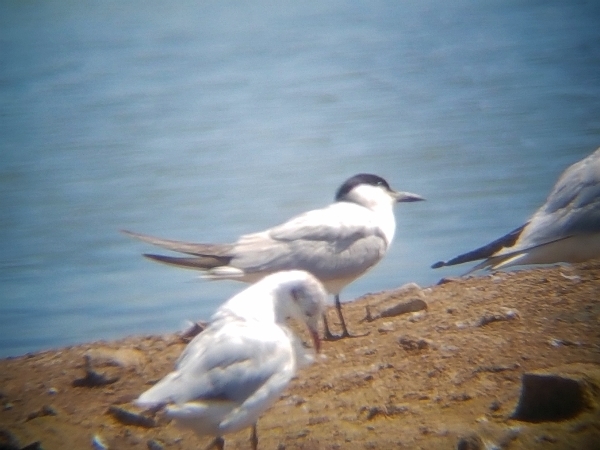 We ate our picnic lunch whilst sitting at laguna Dulce, during which we noted very active Zitting Cisticolas and several Reed Warblers.

Next we stopped at the Raptor Viewing point near the Teba Gorge, but the heat was too much for the group and very little shelter was available, we saw three Griffon Vultures and a single Common Kestrel during our brief stop. 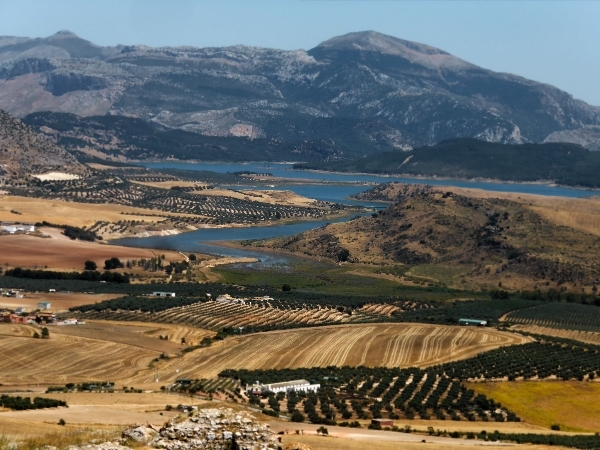 The view of the Guadalteba lake complex from Teba

Afer driving past the Teba Gorge we entered the town and because of a missed turning we saw the town's main streets qyite a few times before finding our way up to the Castle.  Sue and Henry in the following car stopped to watch a Eurasian Hoopoe in the scrub on the way up. What a fantastic view from the Castle, it was terrific and a bonus surprise was a flock of Red-billed Chough, they clung to the sheltered side of the castle walls in great numbers, many were juveniles. 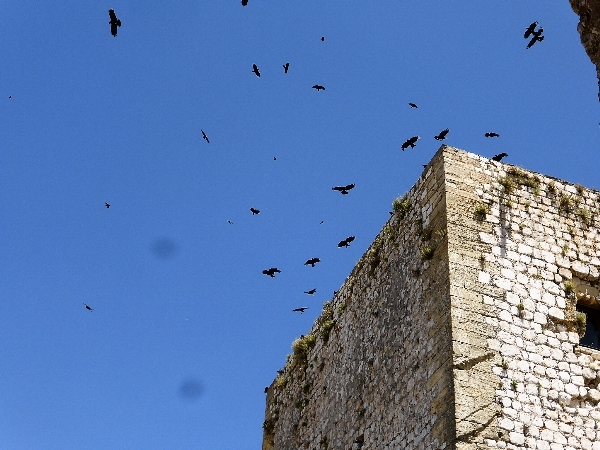 Red-billed Choughs around the 'Keep' 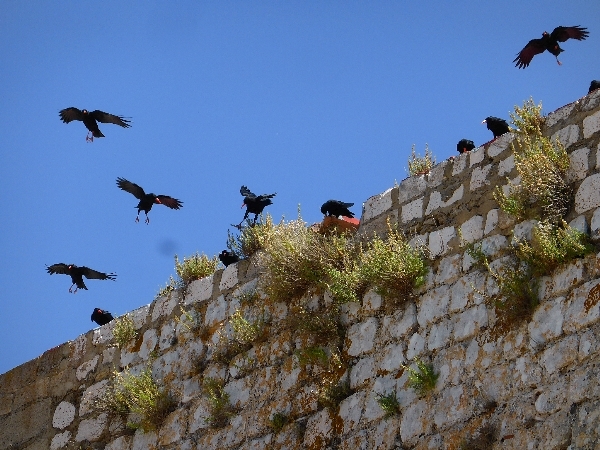 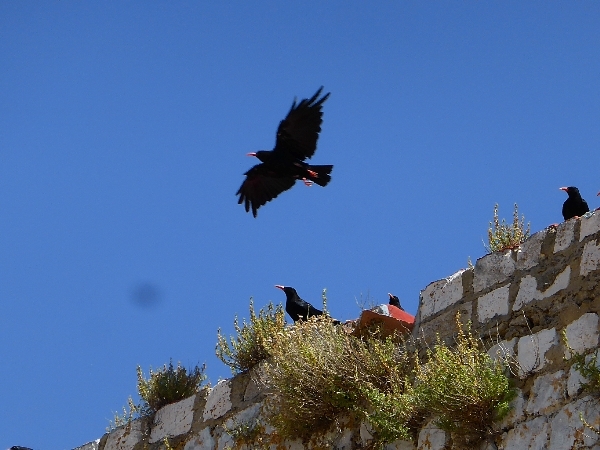 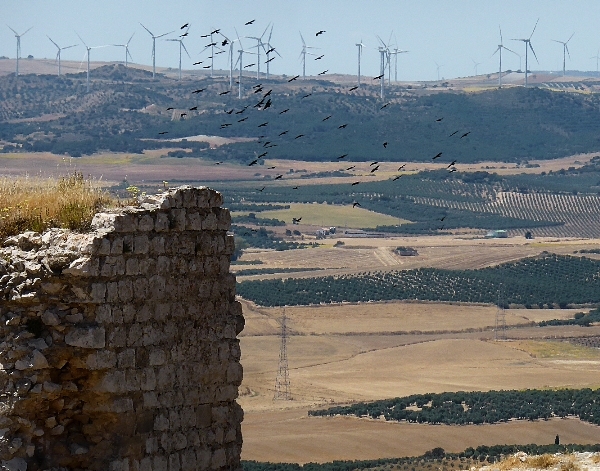 It was quite breezy up there but for some reason several Swallowtail Butterflies, of two species, flew around the castle walls, they were smashing to see.

The two Swallowtails;  Common on the left and Scarce on the right

It was late afternoon by now so we decided to drive back to Gaucin but not before stopping for a well-earned Ice-cream.