DAY TRIP TO PORTLAND AND FERRYBRIDGE

My local birding pal Guy picked me up from home this morning at 8am, it was quite windy and raining constantly, it had been raining for most of the night. We decided to go to Portland for a ‘sea-watch’ because a southerly wind usually blows a few ‘goodies’ inshore at Portland Bill.

The drive down wasn’t easy we had to negotiate several ‘lake-sized’ puddles on the main A37 to Dorchester,  most them spanned the whole road, a canoe would have been a better option in places. But with care, we got through to Dorchester and from there onwards the rain stopped and the sun came out.

Our first stop was at Chesil Cove at the base of the western cliffs off the northeast end of Portland, if the winds are right many sea-birds can be blown into this corner of Lyme Bay. We soon discovered that the winds were much more southerly than we had anticipated and rendered the Cove bird-less, you a need a westerly element to the wind for the Cove to be at its best.

So we drove straight down to Portland Bill where we parked in the car park at Portland Bird Observatory, we checked the morning bird-log in the Obs to discover that nothing very much had been seen either on land or out to sea. Nevertheless we still trundled down to the Bill Lighthouse and sheltered from the wind behind the lighthouse wall. 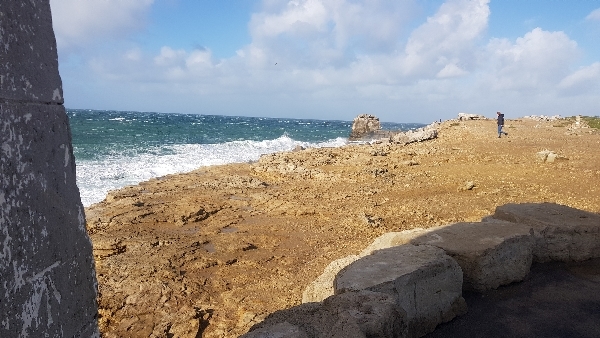 our view looking from behind the Obilisk at Portland Bill

There were lots of birds out to sea, a large mixed flock of gulls and Gannets could be seen not too far out and after 15 minutes of ‘scoping’ the area we saw dozens of Guillemots, Razorbills, Kittiwakes, Great Black-backed & Herring Gulls, Gannets and a couple of Mediterranean Gulls. Unfortunately that was as good as it got! Apart from Shags and Cormorants we never saw anything else or anything of great note, no shearwaters, petrels, Skuas, Divers, Scoters or Little Gulls. 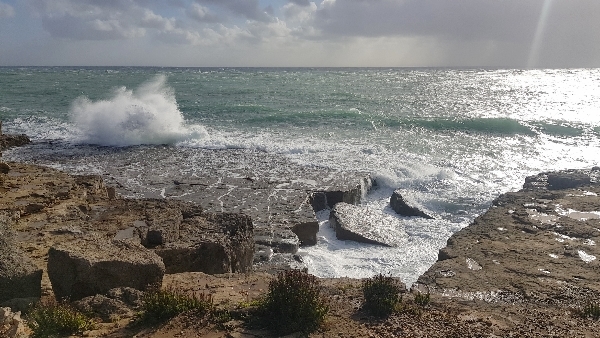 looking down to the eastern side of the Bill

Braving the head-on 40mph winds we walked out to the Obilisk at the Point where we once again huddled out of the wind and attempted further sera-watching. It didn’t take long to decide that we were wasting our time, so we gave up. 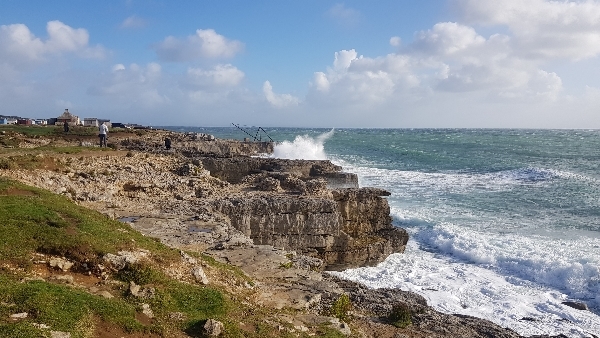 more of the eastern rocky shore

With the wind at our backs we walked eastward along the rocky shore, the waves crashing over the rocks was spectacular at times, we saw a few Rock Pipits, Linnets and Goldfinches.

After ½ mile we found a couple of sheltered inlets with dry platform rocks, disused quarries, in one of them we saw two Black Redstarts, with half a dozen Rock Pipits and a Pied Wagtail. We checked further along the shore but all we saw was a Common Kestrel and a large flock of Great BB Gulls sitting in a field. A few Meadow Pipits flitted about along the fence lines and we saw a single Common Stonechat. 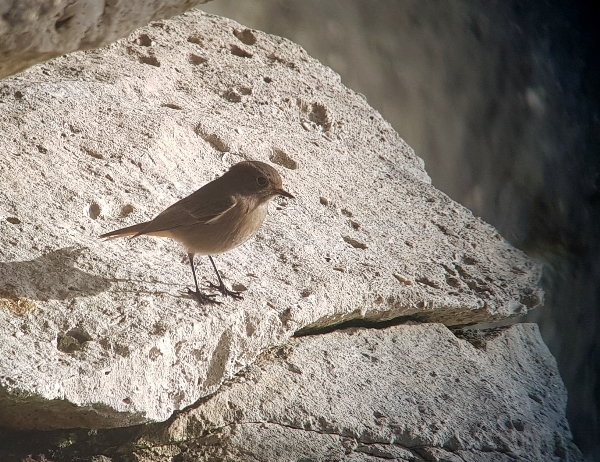 my only birdy picture of the day, a first winter Black Redstart (probably female)

We returned to the Bird Observatory and had a nice hot drink, where we discussed our options. The tops fields had yielded sightings of a Hen Harrier over the last two days but we decided against that because of the windy conditions. So we opted for a visit to Church Ope Cove and the sheltered woodland adjacent to Pennsylvania Castle. We made the right decision because during our search there we found first a Firecrest then a Eurasian Treecreeper (this latter species is not often reported on Portland) and lastly, we found a Brambling and a Chiffchaff in with a Chaffinch flock in the canopy of the trees. I had better mention that my Brambling-Whisperer pal found the Brambling, which made his day, (he never shut up about it for next hour!!, not mentioning the Firecrest I found!!). 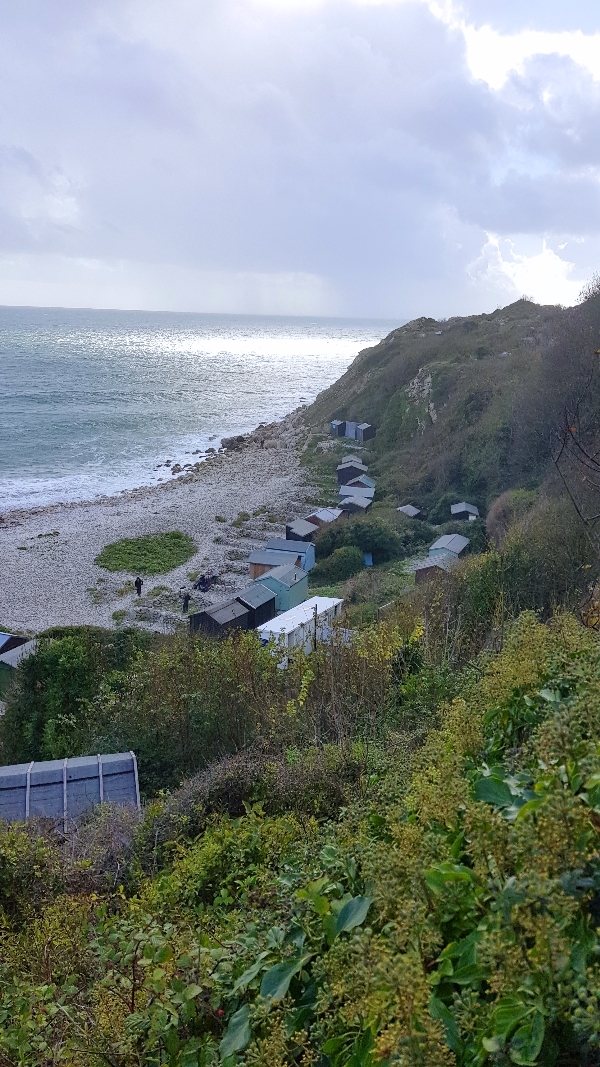 looking down to the beach at Church Ope Cove

Leaving Portland we made a quick stop at Ferrybridge, it was very hard to find shelter there from a southerly, swirling wind so we didn’t stay long. It was coming up to High Tide and most of the birds had gone off to roost, but we did see about 20 Dark-bellied Brent Geese (we sifted through the flock hoping for a Black Brant Goose without luck). Also present was a small bunch of Dunlin, a single Bar-tailed Godwit, countless Mediterranean Gulls and a distant flock of Oystercatchers.

Out in the choppy waters of the Fleet we saw a Great Crested Grebe and to our great delight we found at least four Red-breasted Mergansers, these were our first sightings of this species for this autumn. We left after that and drove the same route home as we had come. It was amazingly dry all the way back for the most part, you wouldn’t even have thought that it had rained earlier, let alone flooded the road in many places.

Now the depressing part - I got home in time to watch my Football Team (Aston Villa) lose their fourth consecutive match, something has to change and soon, now where is that bottle of scotch!