WEATHER: Rain for most of the morning, then clearer weather and finally sunshine

However, it did improve over the next hour and we ended up having a great time with plenty of birds to see. Rita and Ann caught up with several species missing from their list and we all added a couple of new species, A Kingfisher showed well, a Grey Wagtail sat on a post just in front of us and two Great White Egrets sat out obligingly. We added both Redshank and Greenshank to the wader list and had great views of a dozen or so of Common Snipe, but we could not find the Grey Phalarope.

POURING DOWN AT LODMOOR - THE VIEW FROM THE SHELTER

The rain eased off and it got brighter so we took a walk and venture along the west side of the reserve where we added Cetti’s Warbler to the list and had excellent views of the ‘white’ Ruff.

From Lodmoor we drove up towards Dorchester and made a detour to the Watercress Beds at Crossways, we were hoping for a Water Pipit or a Green Sandpiper but we only found wagtails and Meadow Pipits. A small group of Barn Swallows with a couple of House Martins was nice to see.

The huge Hill Fort just outside of Dorchester was our next venue, Maiden Castle is a massive complex and sits in a prominent position in huge an area of open pasture and grassland. It is a regular spot for wintering birds especially for flocks of Golden Plover, Corn Bunting, Linnets, Thrushes and Corvids.

We found huge flocks Linnets and Goldfinches, Meadow Pipits, Rooks and Jackdaws but no Golden Plover, perhaps it was too early for them, another week or two and they will be there. What we did find was a large flock of Skylarks and a dozen or so of Yellowhammers. It was raining throughout our visit and it was windy out there but we still enjoyed it. Then we spotted a ‘large Pipit’ on a fence, it was very long-legged and very upright with a longish bill. It had to be a Richard’s Pipit or a Tawny Pipit. Unfortunately, the bird was very distant and it took off and dropped out of site, it was too far to walk over to get a closer look and my group were calling out for toilets and coffee.

We drove back into Weymouth via the Wishing Well tea-rooms in Upwey where a large portion of coffee and walnut cake was served with the coffee! My group were sated as we arrived at Radipole Lake RSPB reserve. The rain had stopped and the cloud was breaking up, patches of blue sky appeared!!!!

It was still a little too windy we hardly saw a passerine on the reserve, Cetti’s Warbler, Blue Tit, Chiffchaff and a Robin. Weymouth was packed with people and cars, the Old Town Car Park was full, I have never seen that before! A Motor-cross event was going on at the beach, 20,000 spectators had turned up!!

Still we managed to get round to Lodmoor for a second visit and what a great visit that turned out to be! The sun was shining, the wind had dropped and the light was excellent. We stood alongside a good number of birders along the west track, then one of them found and described an unusual snipe and I identified it as a Jack Snipe, it showed very well for a short time and all of us saw it though my telescope, smashing! But better was yet to come! 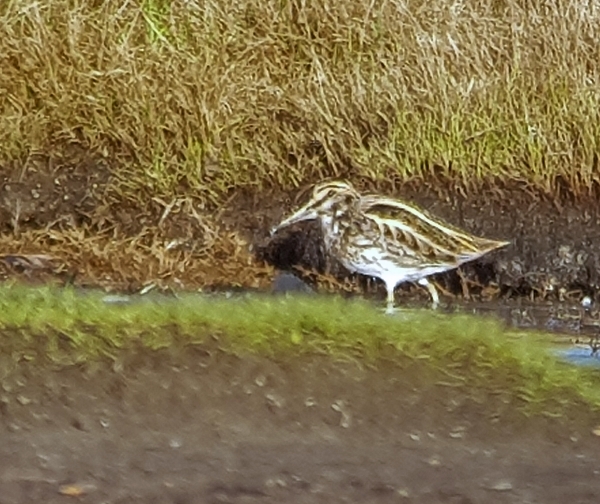 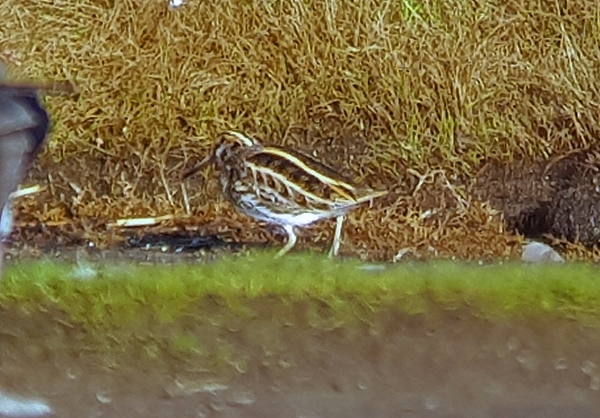 Another group of birders found a WHITE-RUMPED SANDPIPER, they had put the news out about their find on the internet before the news reached us and we were only standing about 50m meters from the finders!!

So we started checking out the Dunlins in earnest. It took about 20 minutes to find the bird, we seemed to be the only birders looking for it. Eventually we got it, amazing, what a great bird for the trip list, an American Waders, my photographs are just record shots really, but you can see what it is. We left around 5pm just as many local birders were turning up to look at the Sandpiper, it was going to get crowded on that narrow path soon. 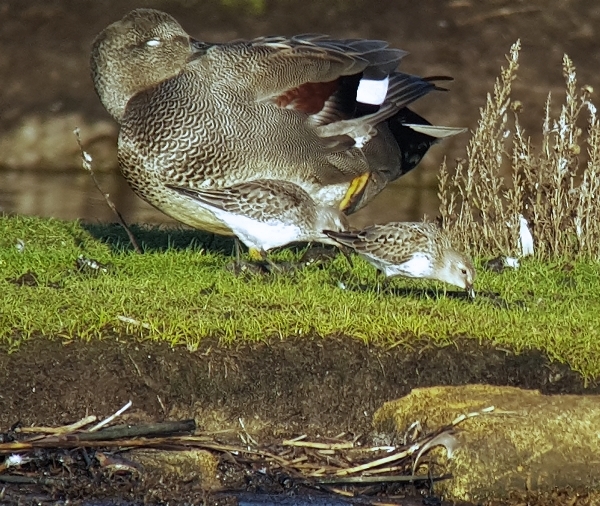 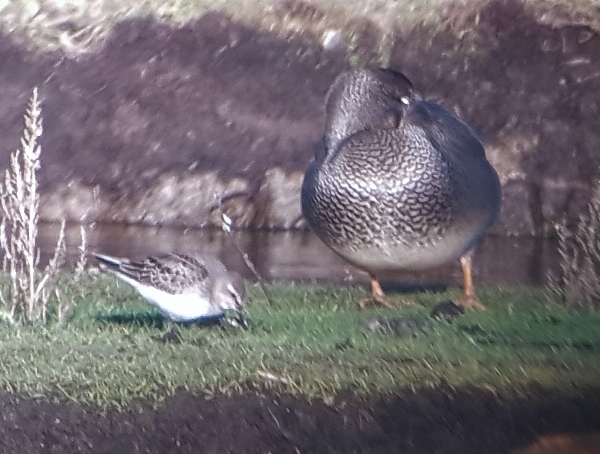 We had a lovely dinner, a Sunday Carvery Roast at a local pub, smashing!