Here we go again…another day of rain, its great to be back in the UK………not!

What do you on day like this with a group of birders, well, you get wet and try to make the most of it. We set off for Wareham Forest at 8am, the traffic through Wetmouth and Dorchester was horrendous but we finally got Sherford Bridge, it was raining.

A walk under the shelter of the mature pines produced a single Goldcrest, we then bumped into a ‘tit flock’ which held about 20 birds, mostly Long-tailed Tits, but also Goldcrests, Coal Tit, Blue Tit and Great Tit. We heard a Nuthatch, saw a Jay, a fly-over Cormorant and a Wood Pigeon!

The girls had had enough already, the light was dismal and the rain was ceaseless and relentless, Mike and I soldiered on, we walked across the road into more open woodland  with Silver Birch and Oak trees, we found a flock of Chaffinches, another Tit flock with the same species as before and a flock of Siskin feeding on the Alder seeds 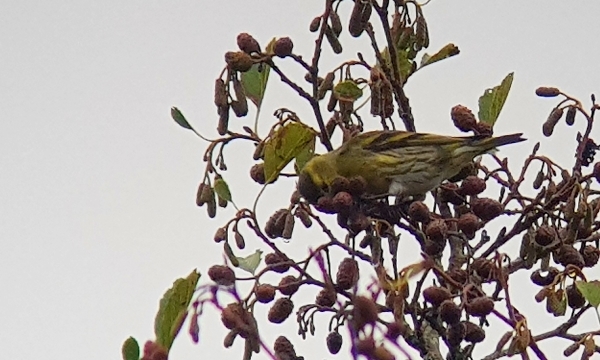 a poor shot of a Siskin

A short walk on the heath produced very little, Common Stonechat and a few Meadow Pipits, it was dismal out there in very poor light and did I mention that it was raining?

From Wareham we drove to Longham Lakes near Bournmouth, an AMERICAN BLACK TERN had been there for nearly a week so we went to look for it. It took a while because the Tern was feeding along the distant shoreline, it was hard to see in the misty conditions, it was still raining

Then Lorna spotted a Tern flying over and not long after we established where the AMERICAN BLACK TERN was feeding, so we walked round the second of two lakes and had excellent views of it, the rain eased off for a little while. 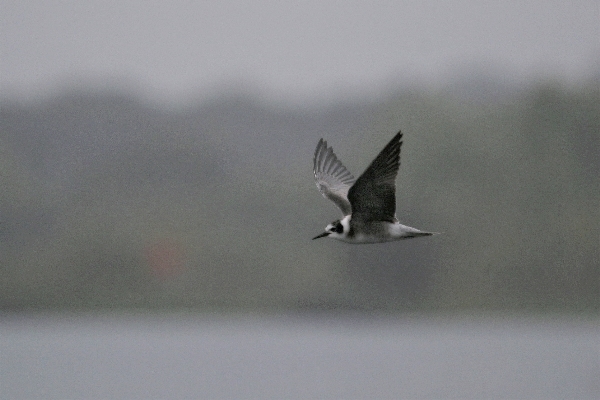 the AMERICAN BLACK TERN, a lifer for all of us. It was very obliging and came very close. Photo and banner pciture taken by Mike Taylor

After stopping off to buy our lunch we popped into Upton Country Park to eat it, but the rain was so heavy we never got out of the bus and aborted our visit after eating our lunch. We decided to go back to Weymouth and visit the warm Centre at Ferrybridge where they serve excellent cappuccinos.

From the shelter of the centre we saw a nice number of waders including: Bar-tailed Godwits, Dunlin, Ruddy turnstones, Common Ringed Plover and Oystercatcher (35 were sitting in a field). We also saw all the common species of gulls and our first Red-breasted Mergansers of the trip.

The rain stopped at 4pm, we had news of a Red-breasted Flycatcher on Portland and decided to make a quick visit to the ‘Clump’ on Avalanche Road in Southwell, Portland. It was well worth it, we all got to see this little eastern gem.

my group waiting for the Red-breasted Flycatcher to show

We then heard of a Wryneck sighting near the Portland Bird Observatory, as we were so close we drove round there for a quick look. We saw large flocks of Linnets, two Common Buzzards, Meadow Pipits, Stonechats, but not the Wryneck!! 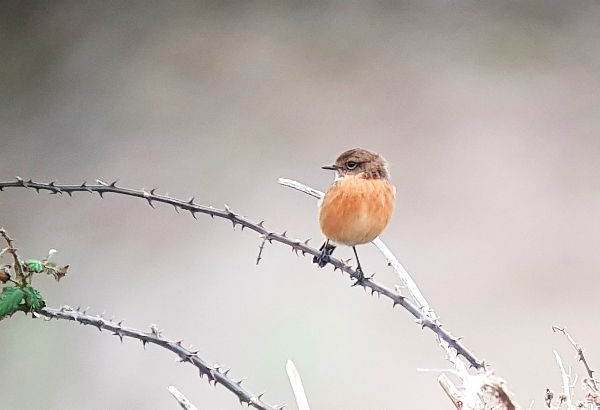 We were back at the guest house before 6pm and went out for dinner at 7pm. I must say you are spoilt for choice in Weymouth, there are many pubs serving excellent food, we tried the Marquis of Granby, a great place to eat.