WEATHER; torrential rain to start then progressively brighter and warmer

I was woken up at 6am by the torrential rain and thunder which continued throughout breakfast at 7am. But by 9am when I was collecting my group the rain had stopped blue sky appeared and the sun came out, marvellous.

We drove to Martin Down which took about 40 minutes, it was bright and sunny throughout our walk. As soon as we got out of the bus and assembled to begin the walk a GOSHAWK flew up from a clump of trees and flew away from us, it circled a couple times before disappearing, What a fantastic start to the day, a great bird for the list. 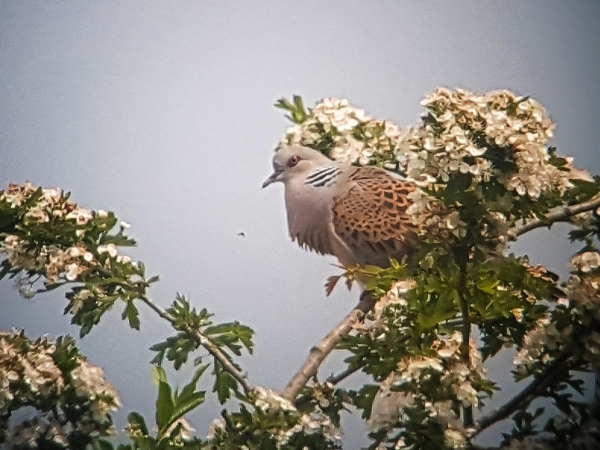 tURTLE DOVE - this bird was sitting in exactly the same place as the one I saw on Wednesday.

Next we found a Turtle Dove, it was calling constantly as was a Common Whitethroat, we also heard Blackcap and Chiffchaff. Skylarks were singing from every direction, but our first sighting was of one fluttering high above us.

A beautiful male Yellowhammer was next on the list then we located a Corn Bunting  as it sang from the top of a bush. We had further views of Yellowhammers and Skylarks perched on small bushes before we moved further into the ‘Down’ near the ‘Long Berrow. 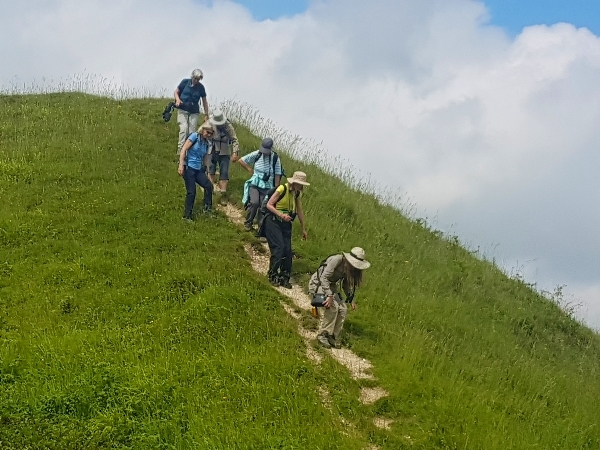 Our search for Stone Curlew went unrewarded although I have a feeling that they no longer breed there. As the sun came up so did the butterflies, we listed several species: both Large and Small Whites, Adonis Blue, Common Blue, the much rarer Small Blue, also Small Heath and our first Fritillary – Marsh Fritillary. Many Cinnabar Moths were also on the wing. 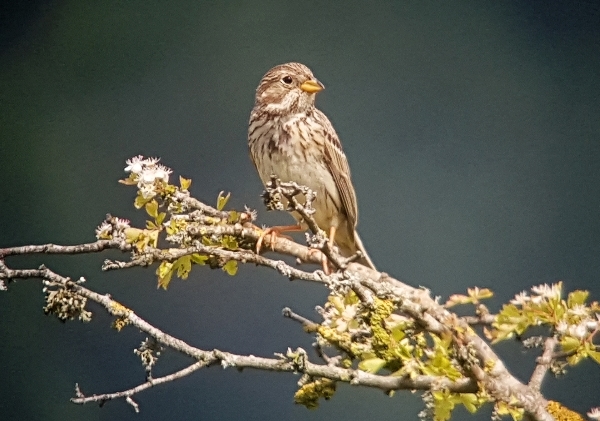 I can't escape from this species, everywhere I go they follow me - the 'colourful' Corn Bunting

Other wildlife of interest were Orchids, 8 species are found on Martin Down, we found just one, the Heath Spotted Orchid, but what a beauty. 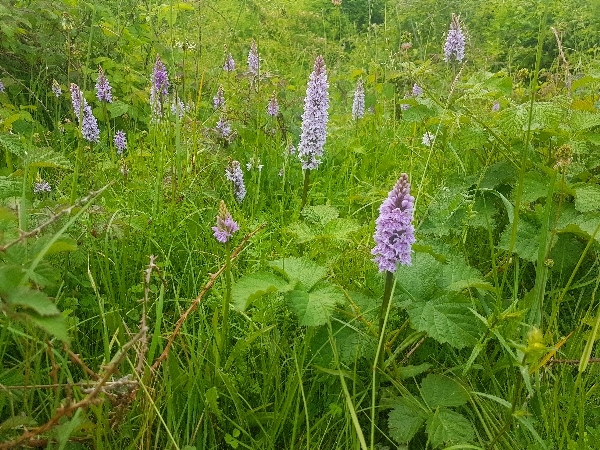 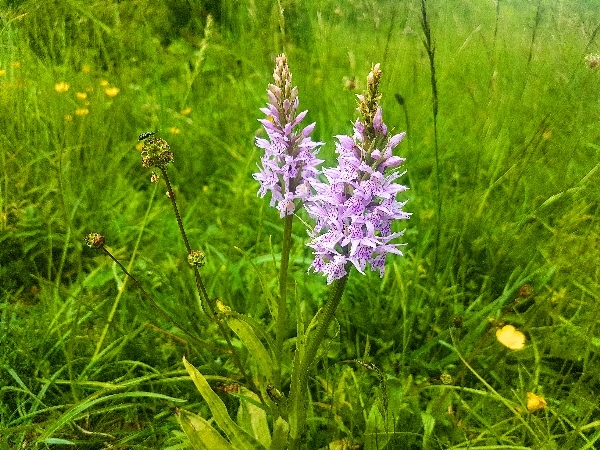 A Common Cuckoo called as we returned to the car park but despite searching the scrub and dense bushes we couldn’t find it. A very showy Common Whitethroat was our last species as we approached the bus.

We ate our lunch sitting on a grassy bank overlooking the reserve, we added Red Kite and Common Kestrel to the list whilst we ate. A strip of woodland lies a little way to the north within easy walking distance of where we ate lunch so we decided to have peak in there. 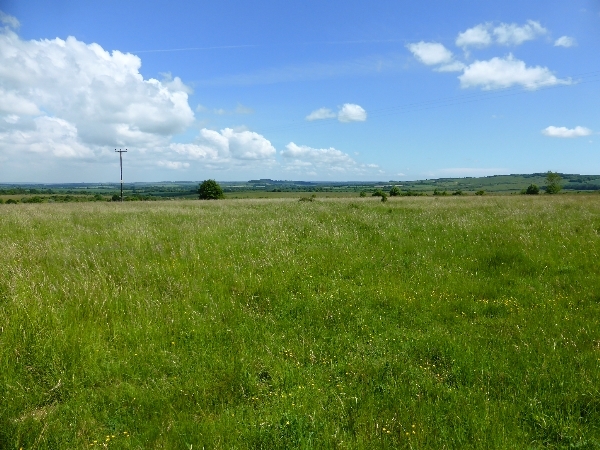 The view from our lunch site.

The woodland was full of abandoned Hazel Coppice, with a very dense canopy, very little  undergrowth due to the lack of light making it through to ground level. Some mature trees provided the perfect habitat for Marsh Tit and with some patience we tracked a pair down, seeing them on our return journey. 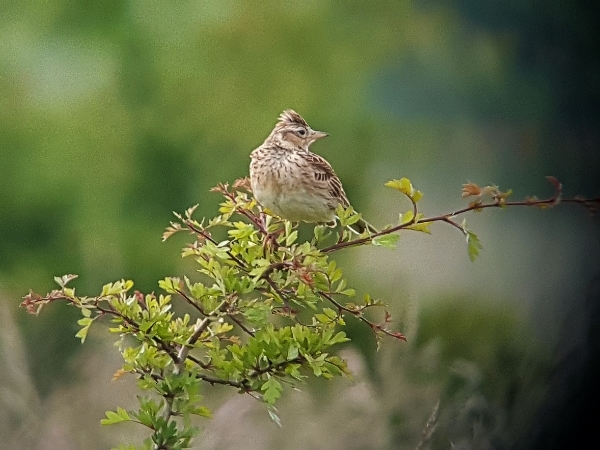 From Martin Down we drove down back to the coast very close to Poole and Lytchett Minister and after stopping for coffee and/or ice-cream we arrived at the RSPB Reserve called Lytchett Fields. It was a bit of a walk to get there but it was worth it. 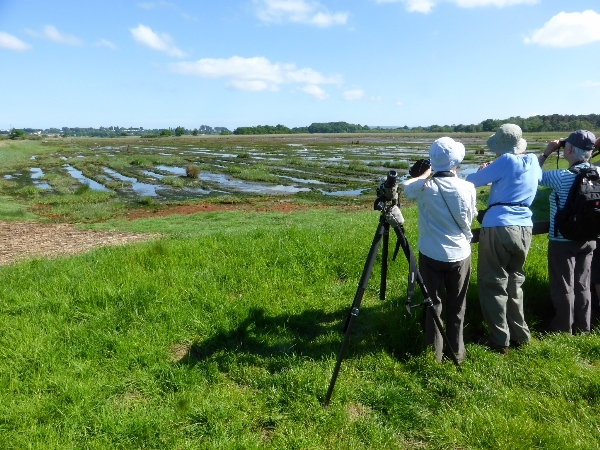 looking over the marsh at RSPB Lytchett Fields

The fields are brackish flood meadows and were covered in birds, the most common species were Black-tailed Godwits, Black-headed Gulls and Common Shelduck. We did find lots of Common Ringed Plovers, some Dunlin, a Moorhen, a pair of Eurasian Teal and a family party of Pied Wagtails. 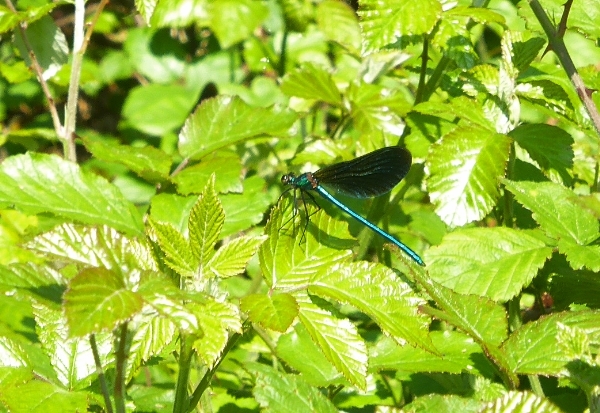 It was very enjoyable in the afternoon sunshine, but soon it was time to leave. We noted Beautiful Demoiselle Damselflies on the way back and a family party of Long-tailed Tits.

We were back at the hotel at 5:30pm and we ate dinner at 7pm. This was our last supper as tomorrow we go home in the afternoon.