What a fantastic day!1 It was very long but most enjoyable, we saw some fabulous birds, a few mammals and some great habitats. We met at 4am, yes 4am!! Its not another typo, I meant 4am, but it was worth it, over the next 3 hours we had the best birding that I can remeber for a long time, there is something special about an early summer's morning.

It was light at 4am, it was a beautiful morning, clear sky no wind and a nice breeze. We drove for about 10 minutes and stopped at the entrance to a wide open area of fen. A raised hide allowed good panoramic views of the whole area. 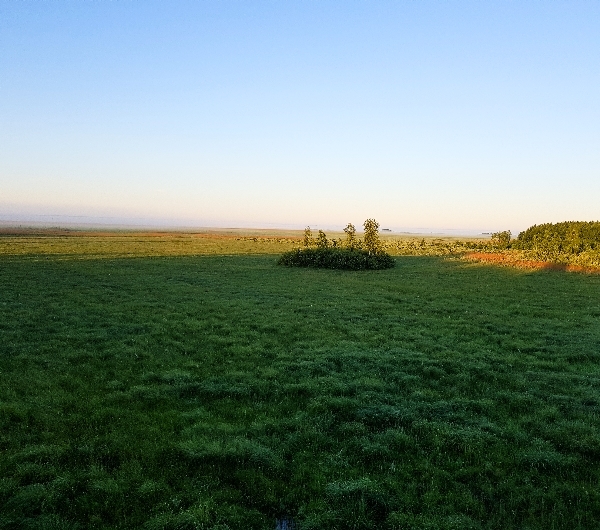 the view from the raised hide. 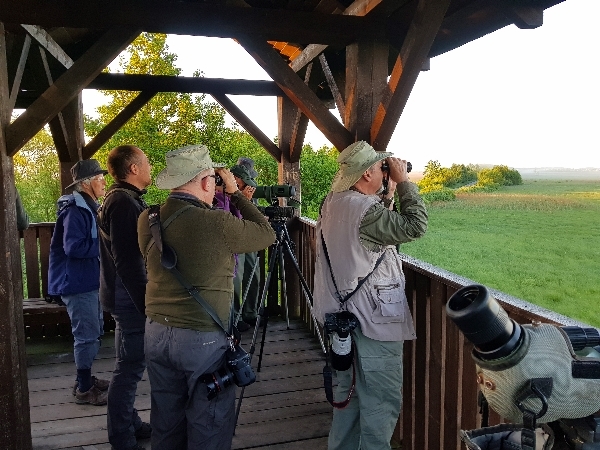 A Savi’s Warbler was reeling away for almost the whole hour that we were there, we found it in a small reedbed not too far away. Other bird song came from all directions, Sedge Warblers, Common Rosefinch, Thrush Nightingale, Icterine Warbler, Common Cuckoo, Common Whitethroat, Golden Oriole, Red-backed Shrike  and many more. Common Snipe were calling and often flying around in display and a Corncrake called a few times without showing. 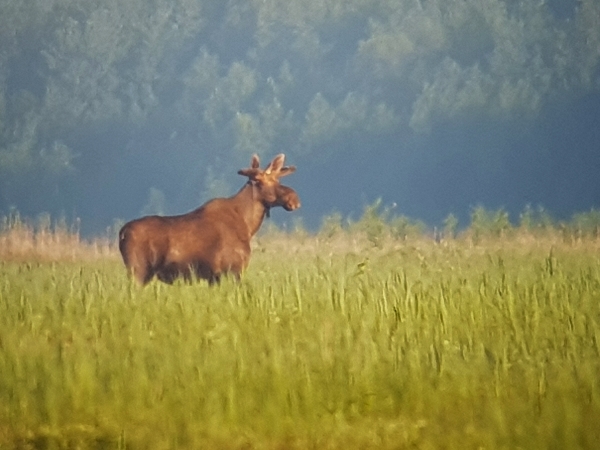 Our main target was the Elk, we saw 4 of them in the distance, all of us saw them through the scope, also a single Red Deer showed up. About 1km further down the road there is a boardwalk that takes you about 300 meters onto the fen where you are right in amongst the wildlife. We got much closer views of the Elk and lots of birds. The best sighting for sure was of Aquatic Warbler, a little distant at first but it flew much nearer and showed well in the scope. 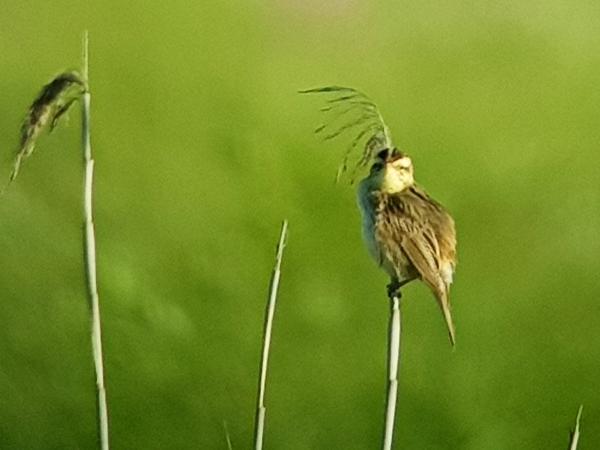 Aquatic Warbler - showing well but at a distance, you can see the diagnostic central crown stripe in the photo below 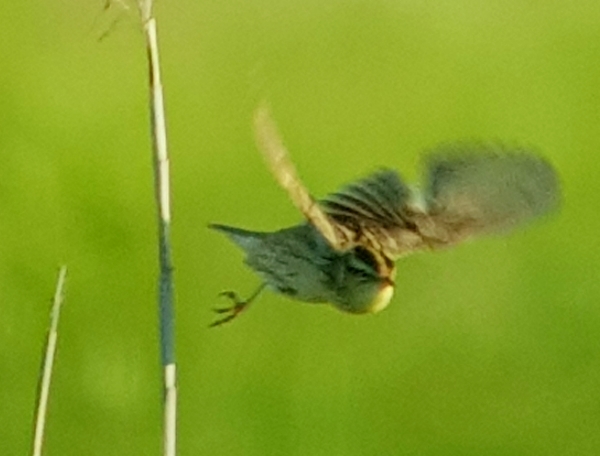 We also got very close to a Grasshopper Warbler, it sat out on top of a bush whilst reeling for about 20 minutes, lots of Common Snipe continued displaying, we saw Reed Buntings, Meadow Pipits, both Montagu’s and Marsh Harriers, Whinchats and lots of Sedge Warblers. We spent an amazing 3 hours out there and it flew by in a flash, what a tremedous place to visit. 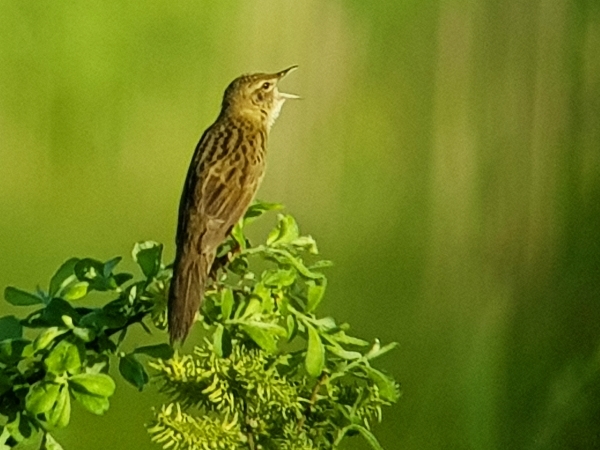 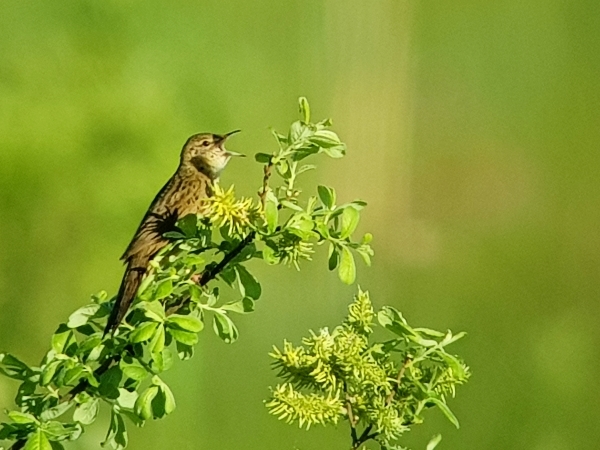 We got back to the hotel just after 7 and we had an hour to kill before breakfast was served, so we walked around the grounds of the hotel and along the lane outside. Many more species were recorded, it was another superb hour of birding. This time we had better views of Common Rosefinch and Red-backed Shrike, we also saw Yellowhammer, Skylark, Eurasian Hoopoe, Common and Black Redstarts, White Wagtail and lots of Tree Sparrows. A Wryneck called a few times from a nearby pine wood and we also heard another Common Cuckoo and we saw the harriers again. Phew, it was hard to get your breath, superb birding ansd most enjoyable. We never saw a single mosquito all morning!!

Breakfast gave us a short break but before long we were out there again. 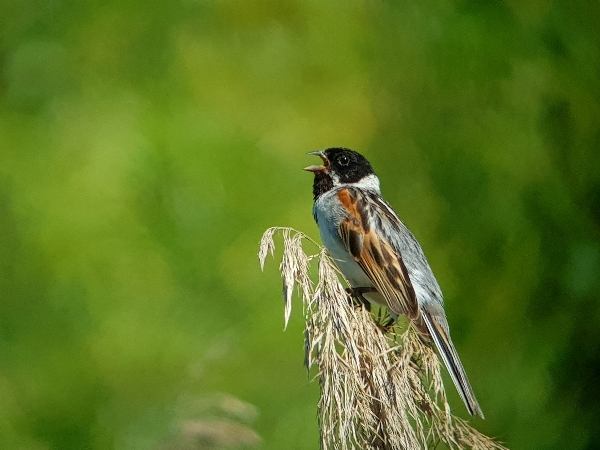 Reed Bunting showing well from the boardwalk at Osoweic

Our next venue was another boardwalk, this time it took us through reedbeds and scrub with an Oxbow Lake in the reeds. We finally got to see Thrush Nightingale whilst it was singing, wow!1 a lifer for most of the group. Several Bluethroats came up and sang from the tops of bushes, more Sedge Warblers and Common Whitethroats sang too.

We tried to find a Garden Warbler without success but we did see two Penduline Tits and found two of their nests with at least one of them being active. More Reed Buntings and a couple of Reed Warblers completed our reedbed list. From there we drove into the centre of Goniad to look at an area of marsh from a raised viewpoint. It was supposed to good for raptors and so it was. We found a single Lesser Spotted Eagler and more Marsh Harriers. We also added Great Reed Warbler to the list as well as Black Tern, Mallard, Grey Heron and Black-headed Gull.

Before we stopped for lunch we stopped in a farmland area near Brychy where we searched for Ortolan Bunting. Although we could hear one we never tracked it down but we enjoyed trying. We saw Whinchat, Yellowhammer, Corn Bunting, Linnets and we heard Golden Oriole, Icetrine Warbler and Skylark. 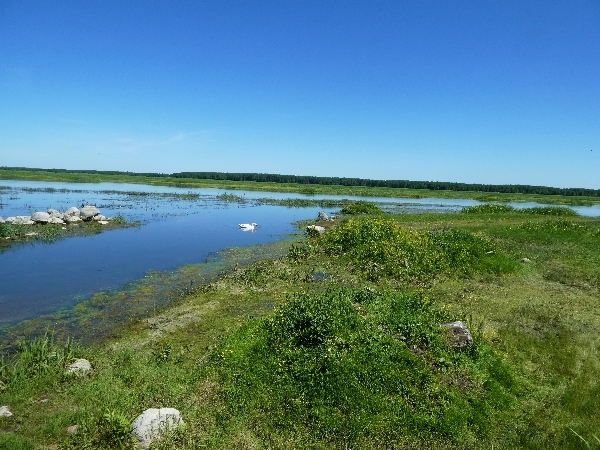 We took lunch in a restaurant, sitting on a terrace overlooking a river and marsh area, we then drove a short way to Brzosctowo where we stood near the river Biebrza and scanned the huge marshland behind it. We added a number of species from there, including: Common Redshank, Northern Lapwing, Black-tailed Godwit, Great Egret, Mute Swan, Common Crane, Black Tern, Yellow Wagtail and more Marsh Harriers.

The group were flagging by now, we had been out for 12 hours, so we went to one more place before driving back to the hotel. From a raised bank we had great views of another area of marsh. We saw a family party of Wild Boar, some Red Deer but not many birds, although we did have good views of grey Partrdige and Yellow Wagtail. After about 30 minutes we decided to call it a day.

After a refreshing shower and a nice cold beer on the terrace we ate another lovely dinner at 7:30pm. We called the bird-log and several birds were suggested as bird of the day, Bluethroat, Aquatic Warbler, Thrush Nightingale and Penduline Tit were the main contenders, we had so many to choose from.