WEATHER:  cloudy for most of the day, rain in places some sunshine later. Temp 25 - 30C

We continued our search for woodland species today with visits to two parts of the forest at Kosy Most. But first we went for a pre-breakfast walk at 6:30am along the river just below the hotel. A large viewing tower overlooks the river Narewka and the marshes all around it, many birds were singing including River Warbler, Common Rosefinch, Great Reed Warbler, Garden Warbler, Red-backed Shrike and lots of common species. A couple of Common Kingfishers dashed by below us and we got the Rosefinch in the scope, Red-backed Shrikes seemed to be everywhere.

We walked for a kilometer or so checking the scrub and bushes for Barred Warbler, we had short but good views of River Warbler before we finally heard the Barred Warbler. We spent half-an-hour looking for the bird and had fleeting glimpses of it as it flew from bush to bush and it wasn’t until our return journey that we had good views of two males that were squabbling.

At Breakfast we had great views of Collared Flycatcher, a male sat out in the open sunning itself just a few meters from our breakfast table on the terrace.

The morning was spent in two places in the forest at Kosy Most, our guide Bart led us straight to a nest hole of the Three-toed Woodpecker and there it was! A lifer for the group including me, we watched a youngster at the hole calling constantly and then two adults appeared not far away, they were very obliging and called a few times to try to encourage the chick to fledge the nest, what a great sighting. 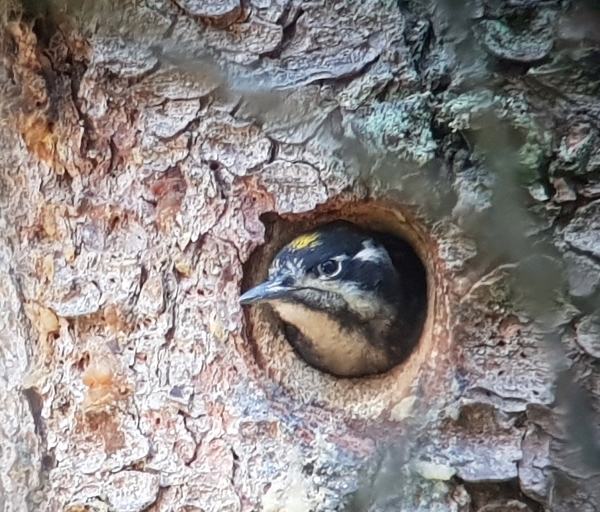 Almost fledged - the chick of the Three-toed Woodpecker 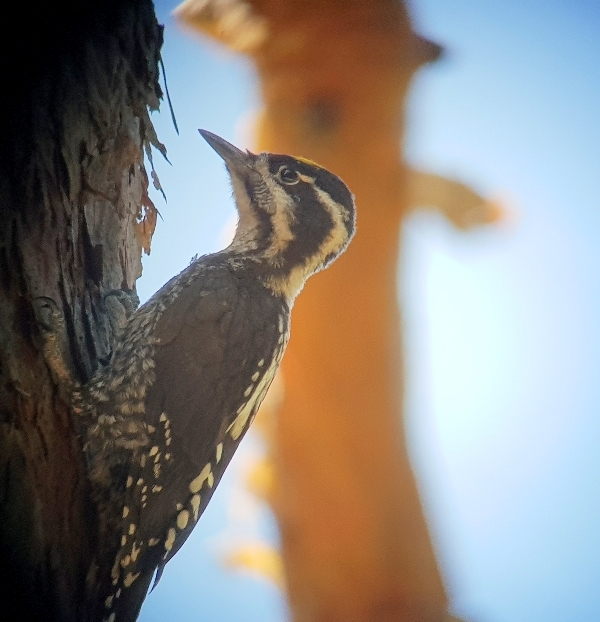 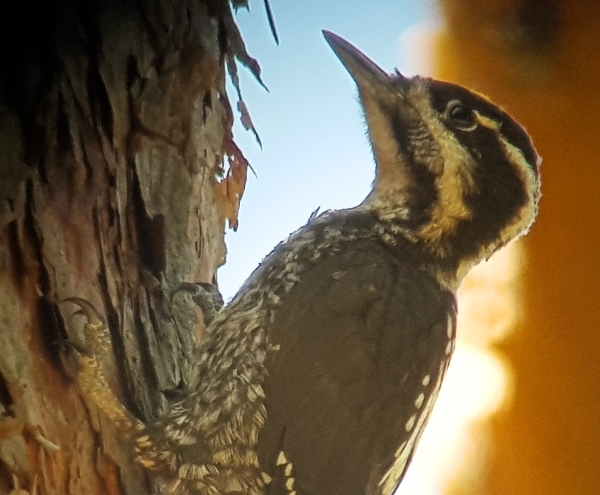 After that we went for a long walk in the forest hoping for a few species not yet seen, after just a few minutes we flushed a Hazel Grouse from the grass verge of the track, it flew a few meters into the wood and we soon saw that it was with a small chick. How lucky was that, we watched the chick for a few minutes and the parent bird flew off across the track but soon returned as we backed off. We had reasonable views of the adult but only fleeting ones.

For the next couple of hours we walked in bright sunshine with a temperature of about 28C, we never saw many species but the walk was nice. We did see quite a few butterflies, the number of Painted Lady butterflies is increasing everyday we must have seen hundreds today, but the star butterfly was the Poplar Admiral, beautifully captured by Mike Ambler in the photo below. 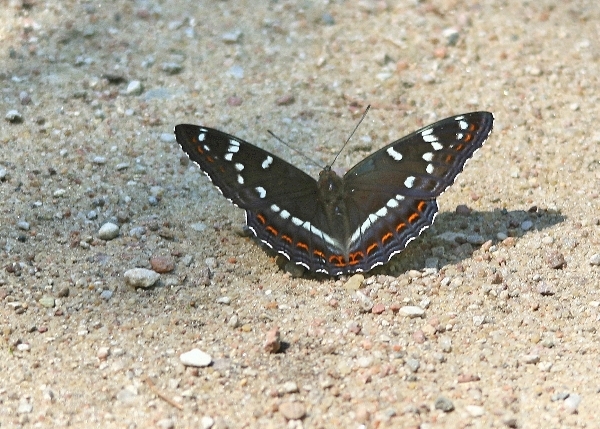 We ate our picnic lunch back at the car park before driving off to the large Reservoir near Baiƚystok, it was very hot when we arrived and most of the group were feeling fatigued from the walking and the heat. We parked by a viewing tower which gave us great panoramic views across the marsh at the southern end of the great reservoir. A White-tailed Eagle flew over as soon as we got there and scanning the marsh we found many birds. Dozens of terns were feeding over the pools they were Black and Whiskered Terns with a few Black-headed Gulls. Great Egrets were dotted about with Grey Heron, Whooper Swan, Great Crested Grebe, lots of Mallards, Common Coot and a few Gadwall. 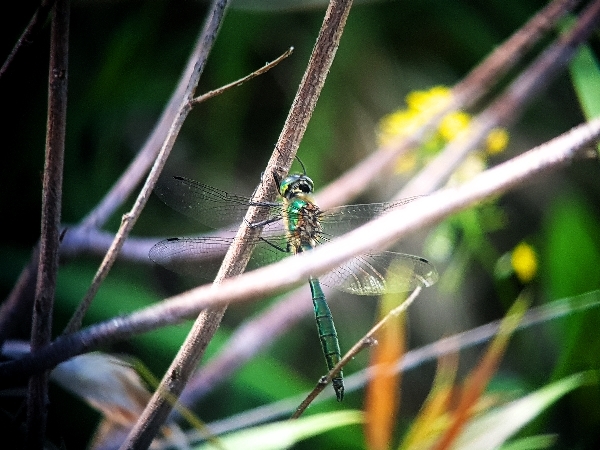 In the marsh much nearer to us we found Reed Bunting, White Wagtail, Whinchat, Sedge Warbler, Green Sandpiper and Redshank. Then Bart found a superb male Citrine Wagtail sitting on top of the reeds and a couple of the group found a pair of Penduline Tits in the reed mace. Buterflies and dragonflies also kept us entertained but it was the raptors that we looked for the most. We had several sightings of White-tailed Eagle (three at one time), but we also saw male Marsh Harrier, our first Black Kite and Spotted Eagle but we couldn’t see whether or not it was a Great or Lesser Spotted Eagle. 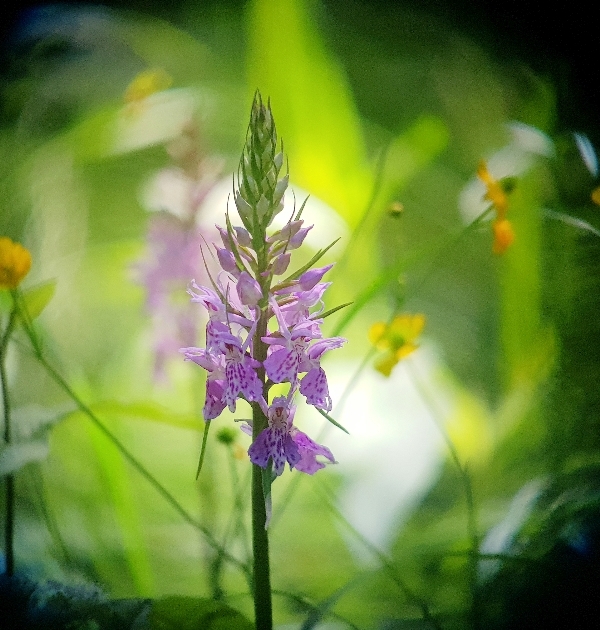 The last place we visited was the viewing tower in the village of Gruszki, this was our second visit to this particular tower and we hoped to see more raptors. Alas there were none in sight, we watched Red-backed Shrikes and not much else from there. Due to a large wedding taking place in the hotel we had to eat out this evening which also gave us the opportunity to search the area for Bison. We drove around the small villages looking into any open grassland in the hope of seeing these huge mammals. By 6:30pm we arrived in the village of Narewka where we stopped for dinner.

After a delicious meal and a nice cold beer we were off again in search of Bison, It had been raining in some areas and a mist began to form giving a magical aura to the countryside. We spent an hour driving, stopping, looking without success. So we finished up and drove back to Biaƚoweiza and our hotel arriving around 8:30pm. Another long day completed.