WEATHER:  wall to wall sunshine, around 20C for most of the day.

We left our hotel at 9am and made our way across the 'dehesa' and onto the open plains (llanos) near Caseres, We made an impromptu stop along the way because we had seen a Spanish Imperial Eagle perched on a rock not too far from the road. By the time we had stopped the bird was quite distant but we had good scope views of an adult bird. Several Eurasian Hoopoes were in the vicinity and one or two were calling. A Little owl also caught our attention whilst two Great Spotted Cuckoos caused quite a stir.

Our route took us passed the town of Caseres and on towards Trujillo, we turned off on a minor road to Santa Marta de Magasca before turning onto a track. Great Bustards were seen on both sides of the track, three one side and seven on the other. A Merlin was playing havoc with the local Jackdaws, we couldn't decide who was chasing who.

Several Red Kites drifted over the fields a Common Buzzard flew across another field we also noted a Raven, a couple of Red-legged Partrdges and more Hoopoes. Larks and Corn Buntings were everywhere, the sky was full of them, the fence lines were crowded and  bird-songs came from all directions. We saw Calandra, Crested and Skylarks as well as Common Stonechat. 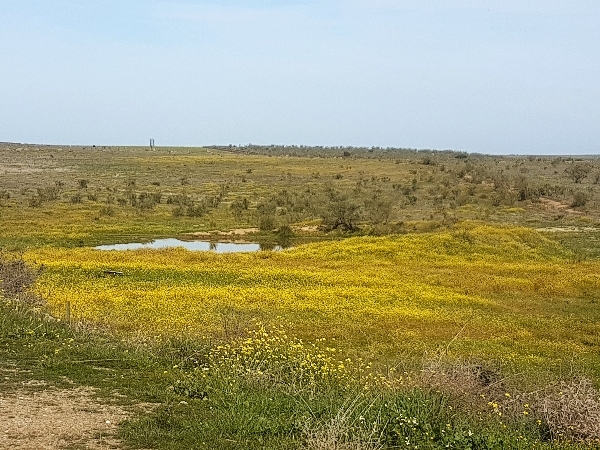 one area of the Plains where we saw Little Bustards, a Green Sandpiper fed around the pool

Further searching along about 2km of track failed to produced any more bustards or sandgrouse but we did see a small flock of Golden Plover, lots of Spotless Starlings, Barn Swallows and dozens Northern Lapwings. As we were about to leave the track we made an abrupt stop to watch another group of Great Bustards, this time there were nineteen of these impressive beasts.

A second stop on the quiet road to Santa Marta was made, this time were on the Trujillo to Santa Marta road and we were searching for Little Bustards. Our guide Martin and Jose scanned the fileds and came up with the goods after a short while. The Little Bustards were quite distant and spent a lot of time in the cover of the scrub but we were all able to see them well in the scope. In the meantime we watched large groups of Spanish Sparrows, smaller groups of Iberian Mgpies and one or two Southern Grey Shrikes. 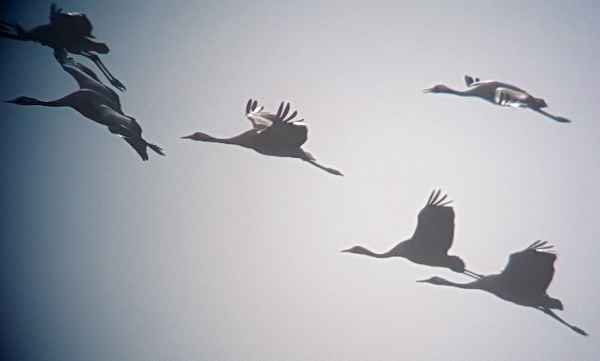 Common Cranes flying over was a common feature throughout the day

Our final stop at this site was on the brow of a hill where good panoramic views could be had over the nearest fields, as soon as we got out of the bus a group of about fifteen Pin-tailed Sandgrouse flew up from the nearest field and promptly disappeared over the brow of the hill. We saw them but only in flight, a fifteen minute search failed to produce a second viewing!

It was now late in the morning so we set off across country towards Merida, we stopped for coffee and tiolets around 1pm and then drove on to a small reservior which was a perfect place to eat our picnic lunch. The reservior held a lot of birds of a dozen or so different species. 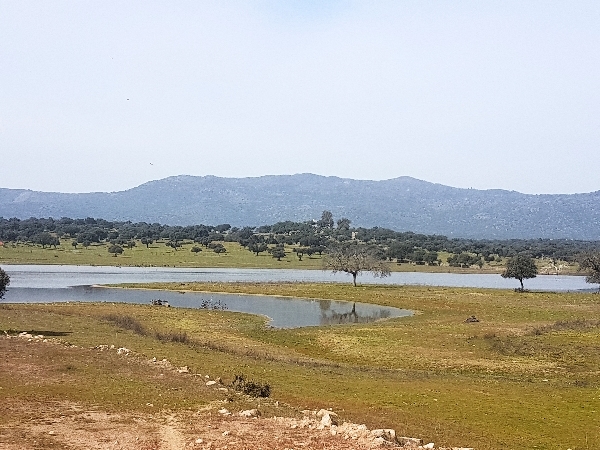 the reservior where we stopped to eat our lunch

The majority of ducks were Eurasian Teal, but a few pairs of Northern Shoveler joined them with Great Crested Grebes and a good number of Black-headed Gulls. The shoreline held a few Black-winged stilts, a flock of around 20 Ruff, a couple of Green Sandpipers, a single Common Snipe and a distant flock of about fifty Dunlin. 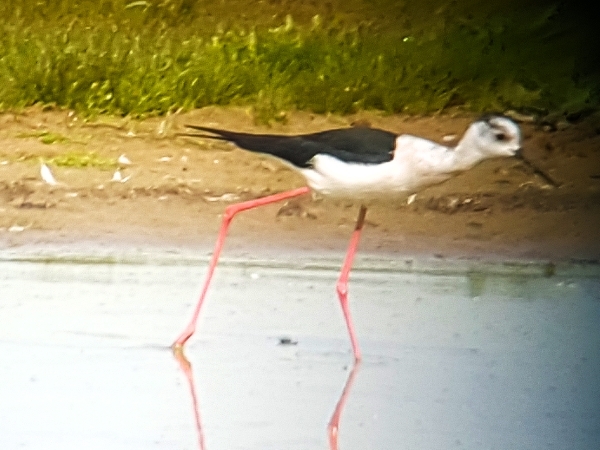 The larger birds were mainly Great Cormorants, with a couple of Eurasian Spoonbills, some Little Egrets and the trees around the far shore held a number of White Storks nests. In with the Storks were a couple of pairs of Egyptian Geese, what a bizzare sight, Geese sitting on nests adjacent to White Storks sitting on their nests. 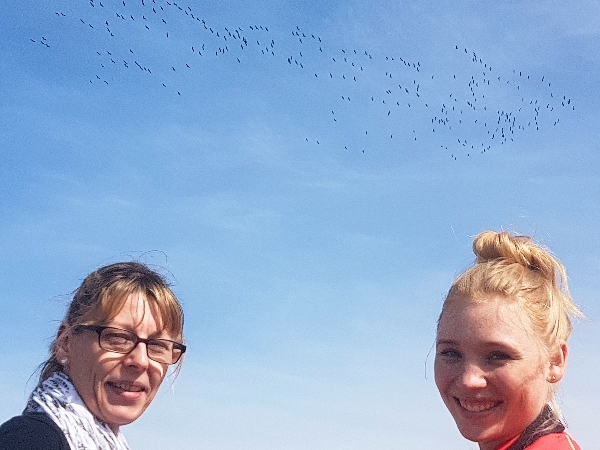 Tania and Tamara, if you look carefully you can see a flock of Cranes above their heads. 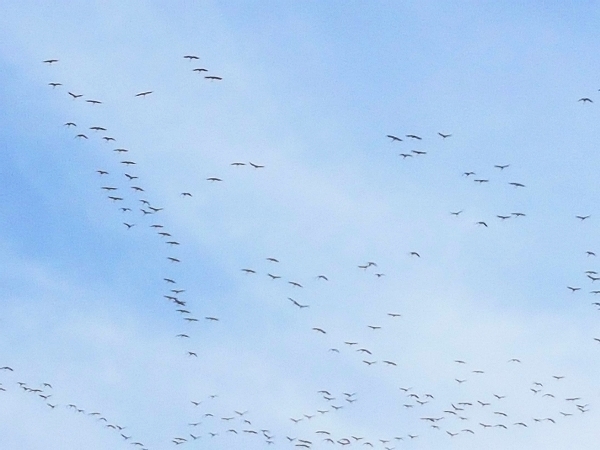 Our best siting by far during this superb lunch break was that of migrating Common Cranes, they came over in their hundreds. About six flocks, each containing over one hundred birds came noisily over us, it was an amazing experience and a wonderful sight to behold.

The rest of the afternoon was spent making our way slowly towards Merida, we cut a trail through little used farm tracks searching, unsuccessfully, the newly flooded rice fields, for flocks of waders. We did see further groups of Common Cranes, these were in very small numbers and were feeding in stubble fileds. Other sightings included Reed Bunting, Common Waxbill, Water Pipit , Marsh Harrier and lots of Eurasian Hoopoes. 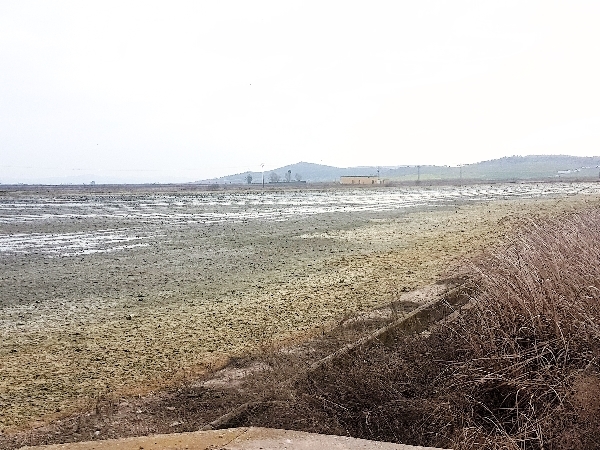 Some of the fields held groups of Gulls, mainly Black-headed Gulls but also a few Yellow-legged and Lesser Black-backed Gulls we also saw groups of Cattle Egrets and a few individual Little Egrets. Towards the end of the tracks and just before we were about to turn back onto a main road to continue our journey south we struck gold!!  One flooded field held a very large number of gulls and when we stopped to scan them from the bus we saw that hundreds of waders were also feeding there, bingo!!

We scrambled out of the bus and discovered an incredible 12 species of waders in the this one field, hundreds of Dunlin were feeding with the gulls and also: Little Stint, Kentish, Ringed and Golden Plover, Northern Lapwing, Redshank, Common Snipe, Ruff, Black-tailed Godwit and two Eurasian Curlews.  Martin and Jose our guides picked out two Yellow Wagtails, the Iberiae (Spanish) subspecies, they were feeding amongst the dozens of White Wagtails and one or two Water Pipits, it was whilst we were looking through the wagtails that an odd looking Lapwing was discovered. It was quickly established that this was in fact the very rare SOCIABLE LAPWING. What an incedible find, two of these birds have been wintering in Extremadura over the last few months but none had seen at this particular site, it was an exciting time and everyone got see this very unusual species. 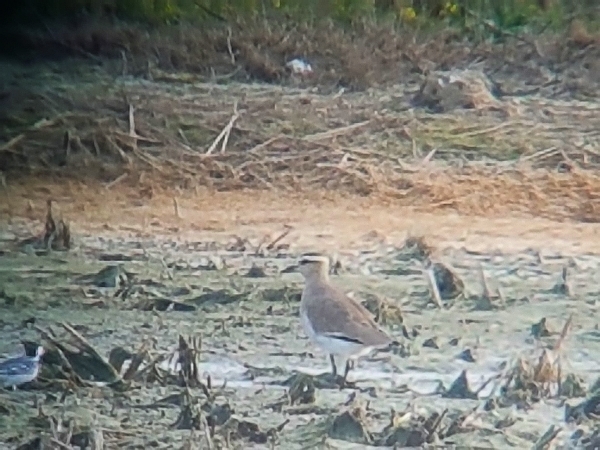 the SOCIABLE LAPWING  - this is my second sighting of this species in Spain. I saw one of them at La Janda, Andalucia last December, 2018. It is the third winter in a row that this species has 'wintered'ín Spain, perhaps it is a trend that will continue?

Well, we were all made up after that sighting and a buzz could be felt zooming around the bus as we drove the last 30 minutes into the centre of Merida to our 5 star hotel. What a fantastic ending to a day where the list of sightings included both Bustards, Sandgrouse, Imperial Eagle, Great Spotted Cuckoo and a SOCIABLE LAPWING! All these were seen in excellent light and superb weather all day long, bring on tomorrow!!