WEATHER: all day sunshine temperature in the lower 20's, a nice breeze in the afternoon

Our walk on the Roman Bridge was a fantastic start to the day, The bridge was just a five minute walk from our luxury hotel and we arrived just as the sun was coming up. It was cold standing around waiting for the light to improve but whta an experience! The bridge is the longest of any Roman origin that still survives in the world today and span the might River Guadiana as it makes its way south to the Mediterranean Sea at the border between Portugal and Spain. 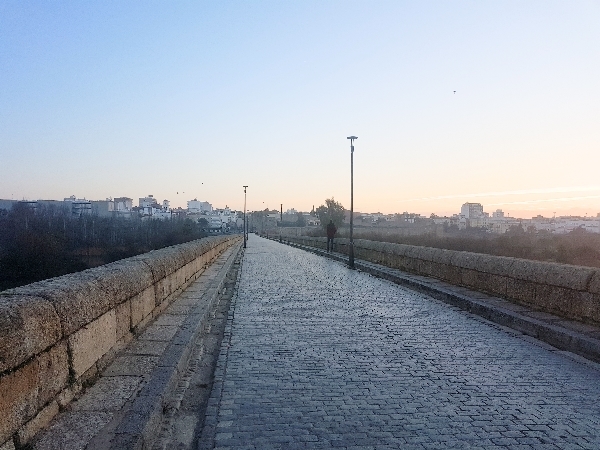 Looking across the 800 meter long Roman Bridge from the entrance to Merida - it took just 11 months to construct this bridge!

Despite the bridge being in constant use throughout the day by pedestrians the bird life below is teaming, even at this time of the year. A huge colony of egrets and Glossy Ibis can be seen to the south-west very close to the city walls. Night Herons flew around us as they gathered for their day time roost whilst egrets, cormorants, gulls, ibis and storks were doing the opposite. 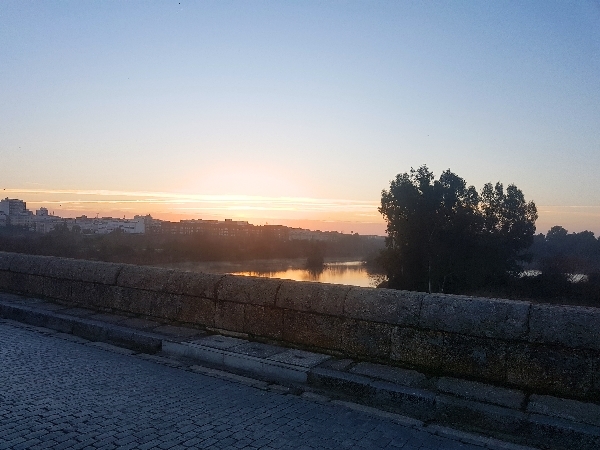 We found Purple Swamphen, Eurasian Spoonbill, Little, Cattle and Great Egrets, Common Kingfisher and a variety of common waterfowl such as Moorhen, Coot etc.. As the sun came up we searched for a Little Bittern which now over winter in Extremadura instead of making the journey to Africa. Surprisingly we also found a Sedge Warbler, another bird that should really be in Africa! We counted over 200 Glossy Ibis, just five years ago there we just a handful of these birds in the breeding colony, their population  has exploded here, it is a similar story elsewhere in Spain and they will be soon a regukar breeding species in the UK. 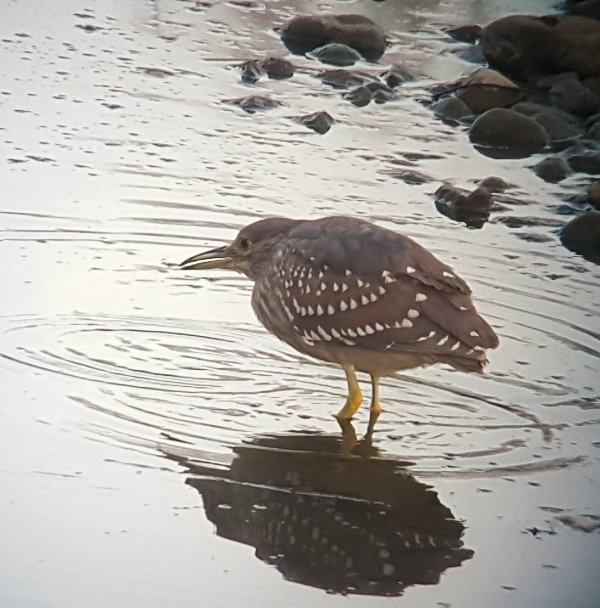 Breakfast was taken at 8:30 am and by 9:30 am we were back on thr bridge! This time we were walking all the way across its 800+ meter span to board our bus. Also this time we found the Little Bittern, what a great poser and an ideal candidate for my blog. 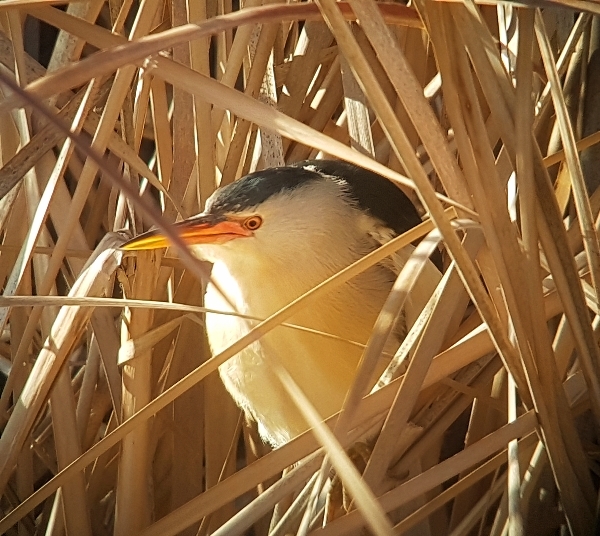 Little Bittern - taken from the Roman Bridge at Merida

The rest of the morning was spent discovering the Montijo area which is only a short drive west of the city. The Los Canchales Reservior is an area of Special Protection Area (SPA) and is one of the most important birdwatching sites in the whole of Extremadura, particularly for wintering birds. It is a huge body of water, we circumnaviagted it using very good tracks, it took nearly 3 hours to complete with all our stops. 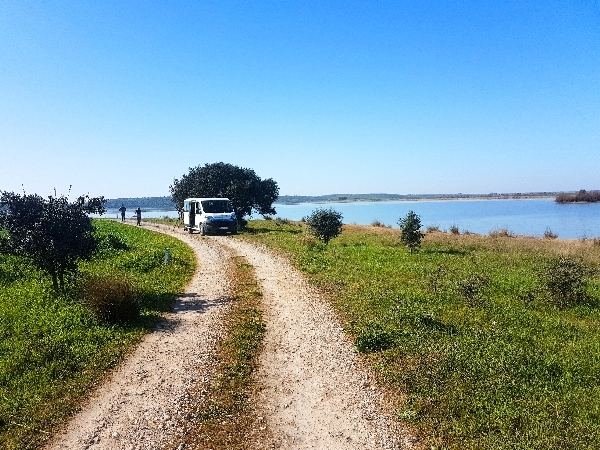 the track around the huge Canchales Reservior

Wildfowl numbers were reasonably high we saw hundredss of birds rather than thousands, I shall list the species in order of numbers not chronologically. Common or Eurasian Teal, Northern Shoveler, Mallard, Eurasian Wigeon, Red-crested Pochard and a single Tufted Duck. We also saw dozens of Great Crested Grebes, they were pairing off, several of the pairs were performing their 'duet' courtship display, or at least the beginings of it. 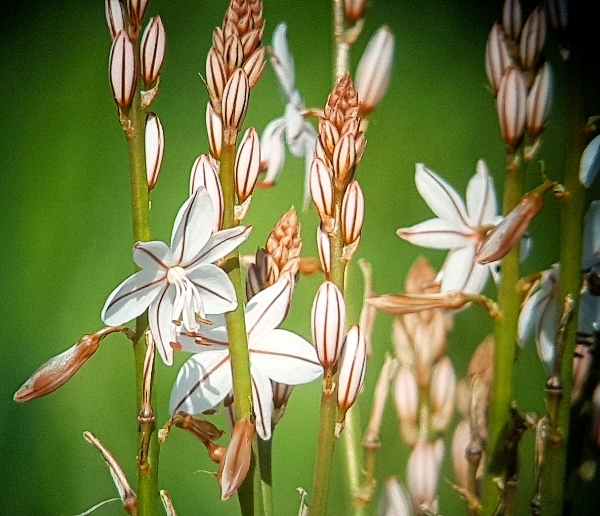 Raptors seemed to present all the time, an Osprey was seen perched and fishin (we never actually saw it dive), Marsh Harriers drifted over the reed-beds, Red Kites were higher and more distant, we also saw Common Buzzard and Common Kestrel. It was the Black-winged Kite that stole the show and was our most sought-after raptor. We watched a pair of them hunting and actually copulating whilst we were there.

All the time during our visit we saw or heard Common Cranes, they came over in large groups, one group held at least 300 birds, we also saw dozens of White Storks, a single Black Stork (as we arrived), hundreds of Barn Swallows and many passerines such as Corn Bunting, Crested Larks, Common Stoenchats, Common Chiffchaffs and Sardinian Warblers. We did see our first Greenshanks, also Common Shelduck, Northern Lapwing, Common Snipe and a few Meadow Pipits.I think the species count was getting on for 50!!

Time passed by very quickly and soon it was 1pm! We made a dash into Montijo for a quick coffee before driving to the River Guadiana at the southern side of Merida. We ate our picnic lunch sitting on a grassy bank in beautiful sunshine. An hour's walk produced very little, we ambled along the river bank and through some wonderful riparian habitat but it was very quiet at this time of the day and very quiet too. We were hoping for a Wryneck or a Penduline Tit, what we did see was Common Kingfisher, Blackcap, Serin and a Long-tailed Tit.

We were back at the hotel just before 4pm and just in time for our Guided Cultural walk which was amazing and most informative. We visited the Alcazaba which formed the major prt of the defence of the city at the end of the Roman Bridge. We saw ruins of the major Forum, Anfiteartro Romano, Romano Teatro, Romano Aqueduct and the amazing Templo de Diana. What a place, you really should visit here!!! 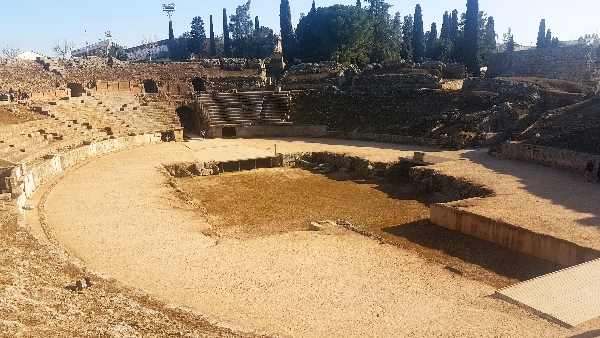 The Anfiteatro (Amphitheatre) had a capacity of 15,000, which was 75% of the population of Merida 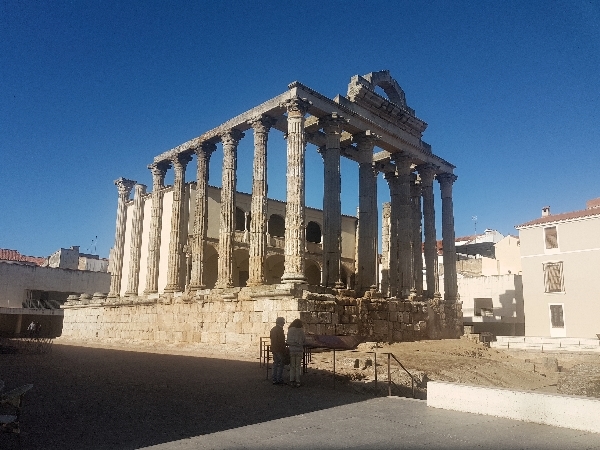 The Temple of Diana  found in the entre of Medina 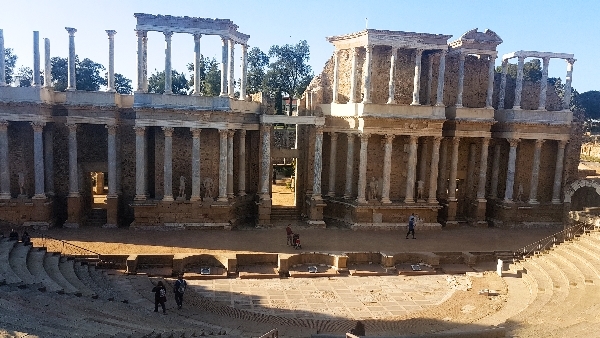 The teatro - found adjacent to the Amphitheatre

Our day ended with dinner at a local restaurant, we were joined by a local Wine Tasting expert who plied us with wine all night and the restaurant supplied excellent food to go with each different wine. It was very well organised and we were all well oiled by midnight when it finished! What a great day, full of birds, culture and wine, just heaven!!