What a fantastic day we had today!! Superb weather, (maybe a little too hot in the afternoon), thousands of birds and great surroundings. Our early morning pre-breakfast sortie was absolutely superb, those first couple of hours after sunrise are magical out on the plains. Today’s sunrise was particularly colourful and dramatic, it was a delight to be out there. 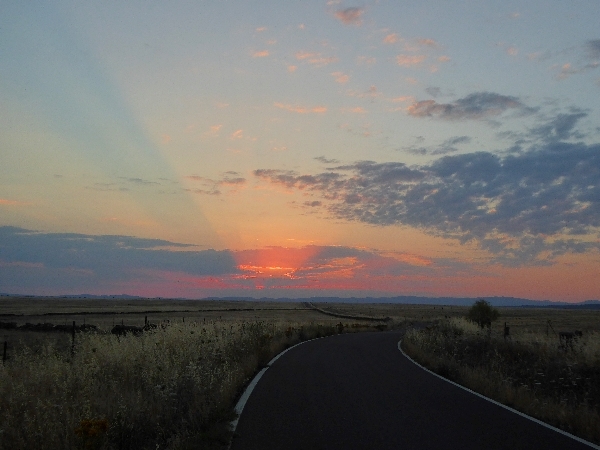 I knew the search for bustards at this time of the year was more difficult, the grass is longer, the birds gather in post breeding flocks and can be difficult to locate in such a vast area. We found plenty of larks, (Calandra, Thekla, Crested) and hundreds of Corn Buntings. Eurasian Hoopoes were abundant, we also found several Marsh Harriers, a single Montagu’s and dozens of Black Kites, also Common Buzzards, Lesser Kestrels and Griffon Vultures.

White Storks covered the landscape with dots of white and it was whilst looking at some of these that we found a group of 10 GREAT BUSTARDS, they were distant but easily scoped. A single LITTLE BUSTARD (male) was found too. We made another search for the Great Spotted Cuckoo but our efforts went unrewarded, we did see a lot of Iberian and Eurasian Magpies, Iberian Grey Shrikes, Eurasian Hoopoes and more Lesser Kestrels.

Just after watching a surprising Great Egret we found 5 GREAT BUSTARDS very close to the road, unfortunately the nearest ones flew off as we approached. The sight of them flying was an amazing experience. Just after that excitement we almost ran over a LITTLE BUSTARD (female) as it flew up from the roadside and landed not too faraway, another bustard in flight how amazing!

Two more Great Egrets were seen before we stopped to admire a Little Owl sitting on a pile of rocks, it cowered down low and starred at us with those remarkably, bright yellow eyes, we saw a second owl not long after as we made our way back to the finca. 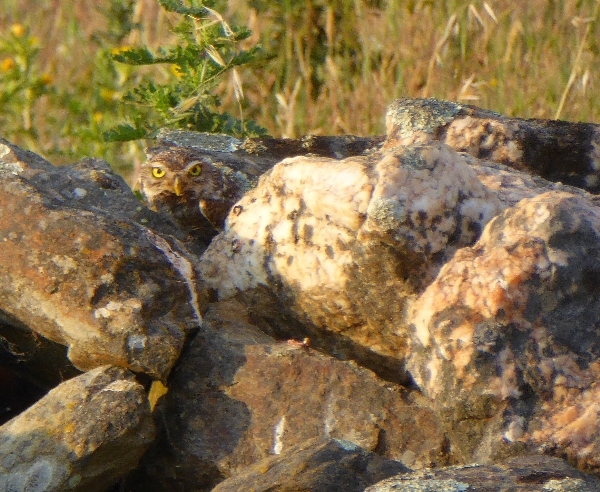 For the rest of the morning we visited the rice fields south of Zorita which is 20km south of our finca. We made a quick stop on high point in the road just passed Zorita, we looked out over the Llanos de Zorita and the distant Embalse, Sierra Brava, could be seen. The most interesting sighting was of an Ocellated Lizard that sat on a concrete gate post, but we also saw a flock of 18 Ravens, a single Montagu’s and 2 Marsh Harriers and dozens of Calandra Larks were dashing about over the fields. 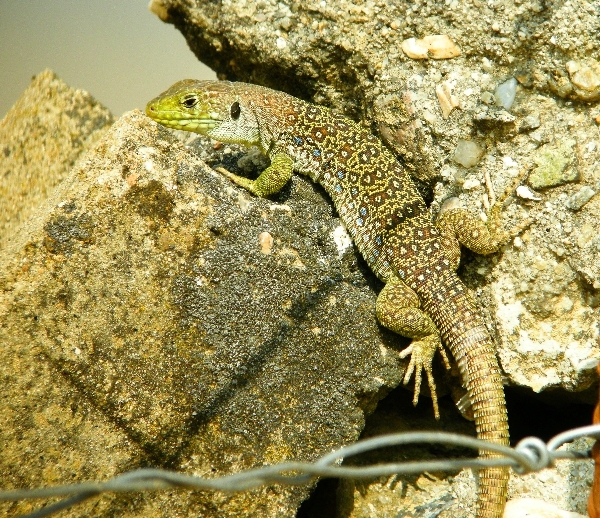 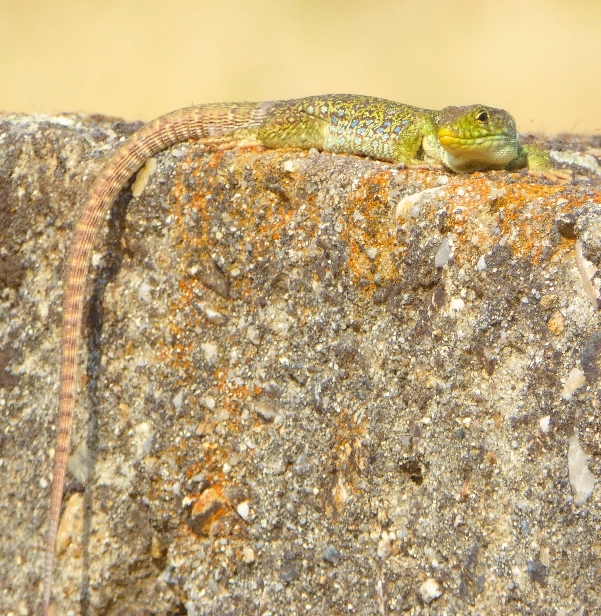 Our visit to the reservoir was both enjoyable and rewarding, we stopped in a couple of places but the best stop by far was on the huge Presa (dam). From our high vantage point we scoped the whole reservoir and saw at least 50 Great  Crested Grebes, 20+ Mallard, a few Yellow-legged Gulls, two Egyptian Geese and a single Greylag Goose. On the ‘dry’ side of the dam a reed-fringed pool offered-up Reed Warbler, Grey Heron and a Purple Heron flew in right below us. A derelict building housed a small colony of Lesser Kestrels which were very active during the time we watched them.

Along the road to Madrigalejo rice fields we watched several European Rollers and a few Jackdaws, we turned into the rice fields and parked near a bridge over the Rio Pizzarosa. A Tree Sparrow was in the bag as soon as we emerged from the bush, we could also hear Great Reed Warbler, Common Nightingale, Cetti’s Warbler and Golden Oriole. Over the next hour we saw all of the above, the Great Reed Warbler was the hardest to find! We also had terrific views of the introduced species, Common Waxbill and a party of Long-tailed Tits came very close. 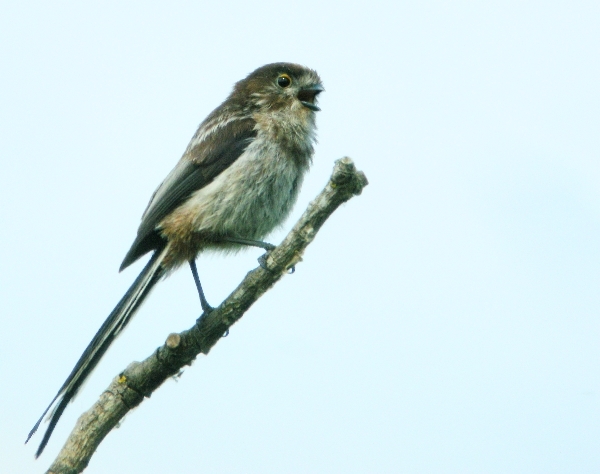 a darker morph, subspecies  Long-tailed Tit is found in Spain

A short walk along the Via Verde (Camino Natural Vegas de Guadiana) found us standing on another bridge from where we saw LITTLE BITTERN and we tried to track down a Common Cuckoo without success. As we left this area we bumped into a number of Collared Pratincoles, fantastic, several of these birds were newly fledged juveniles. Half a dozen European Bee-eaters added more colour.

Our search for another introduced species, Red Avadavat, went unrewarded so we stopped for lunch under the shade of eucalyptus trees. After that we made two more stops before calling it day. The first was near the village of Vegas Altas where we stood on another bridge over a small river. A Common Kingfisher was all that we saw, the river is far too choked with reeds and shrubs. 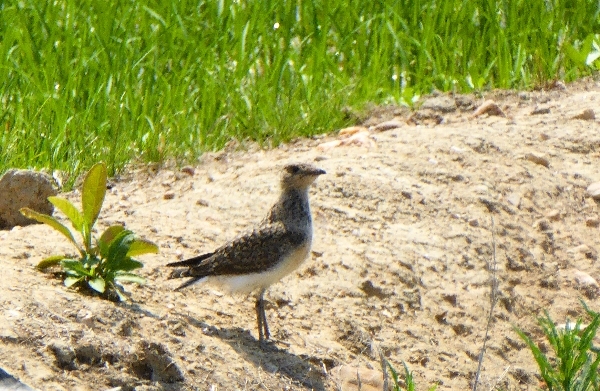 In complete contrast the huge reservoir at Moheda Alta (Common Crane conservation area) was completely open and bereft of vegetation and almost dry. A number of birds were present but not many. The most common species were Black-winged Stilts, Cattle Egrets and Black-headed Gulls but also present in small numbers were Little Ringed and Kentish Plover, Grey Heron, Mallard, White Wagtail and Collared Pratincole. Whilst sifting through the gulls I found two male GARGANEY, wow! I never expected to see them. It is June the 2nd, these birds either didn’t make it further north to breed or are already on their way back south! 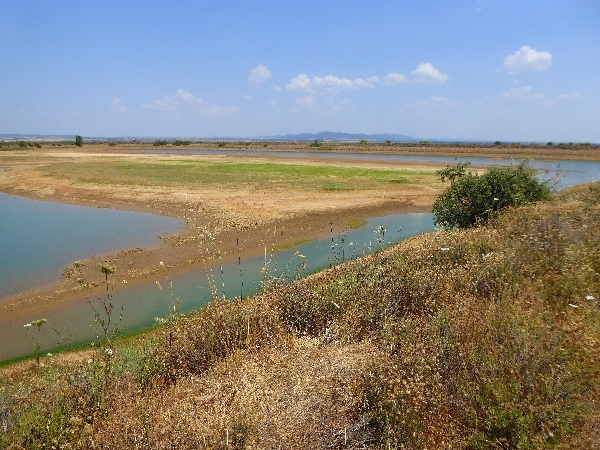 The reservoir at Moheda Alta 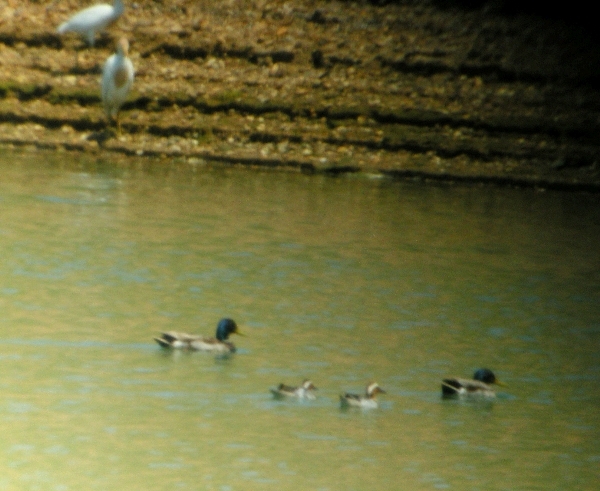 It was now 4:30pm and really hot, 35C, so we called it a day and drove back to the finca for a relaxing time before dinner.