WEATHER: no change, overcast and cold, no rain all day!

At 7am we met up outside the hotel entrance and walked the short distance down the ramp to the back of the hotel. A Black Redstart was singing from the roof and several Serins dashed about from tree to tree. Over the next half an hour we had plenty of sightings but none of the Red Crossbill that we had hoped for. Rock Sparrows were a nice find and plenty of common garden birds were on view and a Wild Boar with a single baby was also a surprise. 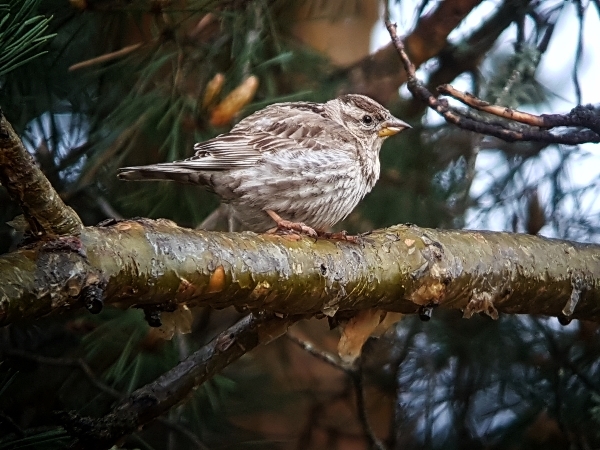 A quick look around the other side of the hotel proved a little better, we added Mistle Thrush to the trip list, we also saw Eurasian Nuthatch, Short-toed Treecreeper, Crested Tit, Coal Tit, Great Spotted Woodpecker and we heard Green Woodpecker.

We ate breakfast at 8am and then set off for our big day in the mountains, we were hoping for a number goodies up there. The Plataforma de Gredos is approached by a 12km lane which passes through some fantastic landscapes and a variety of habitats. We stopped near some pine woods looking for Citril Finch without success and then we stopped near a river where scrub replaces the forest. 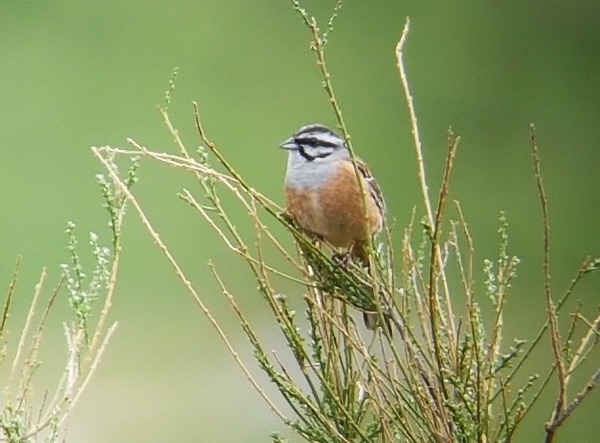 Common Whitethroats sang from several places along with Dunnock and Rock Bunting, we saw them all and as we pulled away we saw a Dartford Warbler dash across the road in front of us. From the car park at the beginning of the walk up towards the Plataforma we watched several other birds. Water Pipits in summer plumage, looked smashing, as did the many Rock Buntings and Black Redstarts, also the very pale-looking Northern Wheatears.

It was bitter cold up there at 2000m a biting wind made it worst, but it stayed dry. The birds kept very low and it was a long time before we started finding any, other fly-overs. During our climb up to the ‘heath-land’ we recorded Red-billed Chough, Raven, Griffon and Black Vultures but not much else, also a herd of Spanish Ibex were seen very high up on a ridge. 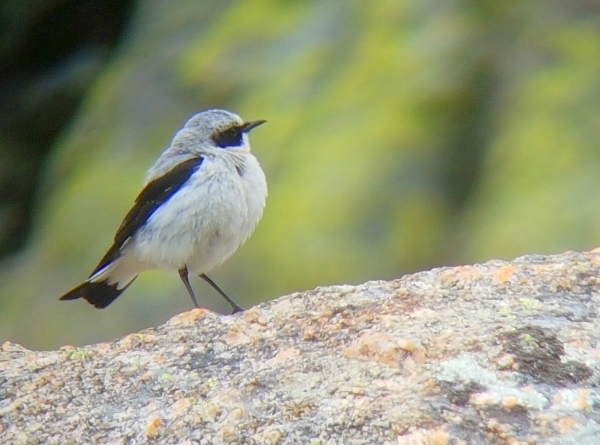 Our star birds began to emerge, we found Ortolan Bunting and Common Rock Thrush, more or less at the same time. The pair of Rock Thrushes drew the most attention and admiration. But finding a Bluethroat was the most testing experience, we spent an hour scouring the gorse and grassy banks before we finally found one. It was a beautiful male and it showed very well as it searched for food in the grass a few meters away from the gorse, fantastic bird, a well-deserved sighting too! 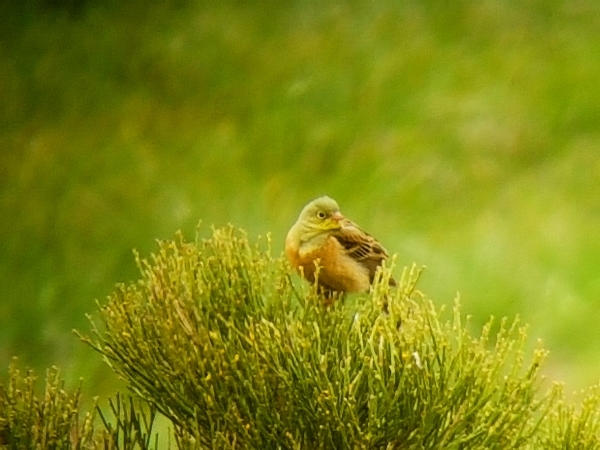 We made it back to the bus around 1pm so we decided to eat our lunch whilst watching Dunnocks and Rock Buntings coming for bread crumbs. The drive down was much quicker, we stopped in a pine wooded area by the side of the River Tormes where we searched for Citril Finch, it is an area where I have found them on a number of occasions in the past. We found Pied Flycatchers, Black Redstarts, Greenfinches, Serins and Linnets before we finally found the Citril Finches. Two of them came down to the river to drink and later at least six more we seen feeding on the short grass. 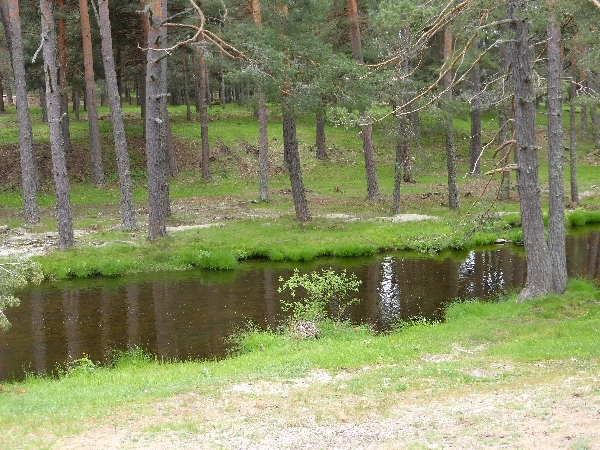 the River Tormes where the Citril Finches came to drink

A cup of coffee was called for and a café right next to the car park was open, smashing. A short walk produced some more sightings the best of which was brief, a flock of Red Crossbills flew over a meadow and landed in the top of a pine tree, they dropped out ofv sight before we got them in the 'scope.

Next, we drove along a lane than ran parallel to the river, we stopped to search some open scrub areas for Buntings and Warblers. We soon found Garden Warbler and Blackcap but not the Cirl Bunting we were looking for.

Before we left the area, the sun came out in short, warm spells, how nice. We saw two Hobbys circle above us as well as Black Kite, Common Buzzard and a pair of Ravens. 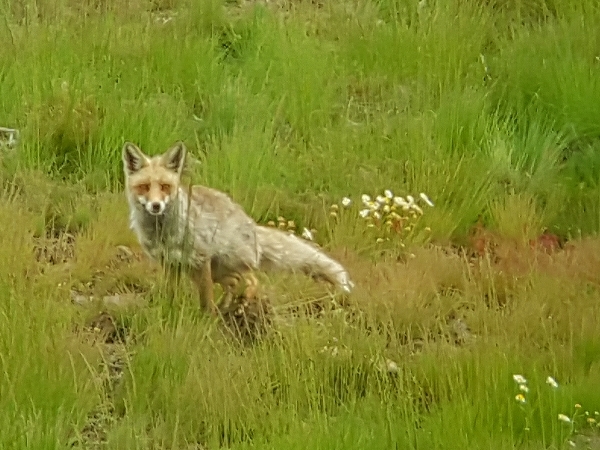 For the next hour or so we worked our way back up to the car park some 10km up the valley towards the Plataforma. We searched for new species and our efforts were rewarded when we found a Red-backed Shrike, our first for the trip. Near the car park we came across many Spanish Ibex, a lot of males with their impressive horns. Wild Boars seemed to be common too, we saw several including a female with three piglets. Very pale-looking Red Foxes seemed to be everywhere too, we saw four in a short space of time. 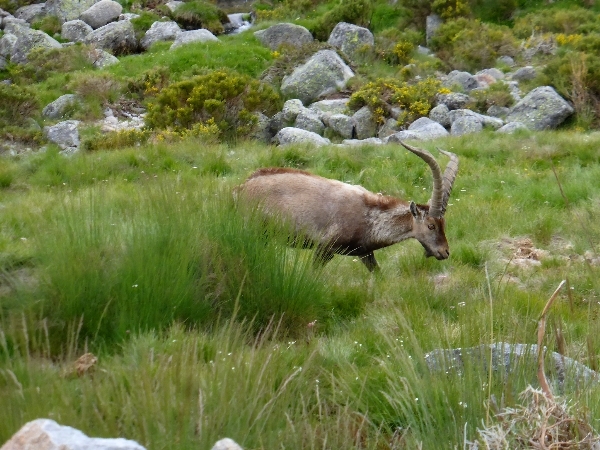 Our return to the hotel was at 7pm it had been along but most enjoyable despite the cold conditions. We sat down to dinner at 8:30pm and enjoyed a lovely meal washed down with a nice glass or wine, or two!

Some of the group went back out just before 10pm to look for Common Nightjars that can be seen about 200 meters along the main road from the hotel. Several were calling and at least three showed well, a great finish to the day.