DRIVE FROM STOFORD TO SCARBOROUGH VIA CHEPSTOW

WEATHER:  a glorious, sunny day, but we spent six hours of it travelling.

It was a very early start for me as I left home around 5am, I drove to Chepstow  collect Nigel Bleaken before setting off 'up north'. The roads were pretty much clear, the weather was fantastic, it was quite a pleasant drive.

Our aim over the next two days was to cover as many birding sites as possible around Scarborough because from Friday I was meeting up with a group of bird-watchers from London and I am guiding them until Monday.

After a couple of short breaks along the way Nigel and I arrived around 12:30, we went straight to the hotel where we were going to be staying with the group. After we had a short tour of the hotel we decided to explore the extensive grounds and local footpaths. The hotel is situated on slopes above the coastline with fantastic views down to the sea. Lots of common garden birds were in the grounds with Swallows and House Martins flying overhead, we saw a Kestrel from the car park. 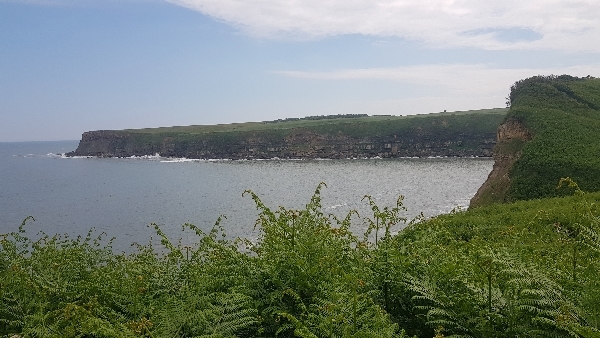 the coastline at Cloughton Wyke

We met up with Lorna and Mike Taylor, regular clients and good friends of mine, Nigel had also met them on my tours, they had driven 90 miles from Sheffield and are staying for a couple of nights too.

All four of us took a track down to the cliffs, about 3/4 mile away. Along the way we saw several Yellowhammers, we heard Chiffchaff, Blackcap and Song Thrush we also saw Goldfinch, Common Pheasant, Skylark, Linnets and lots of Wood Pigeons. 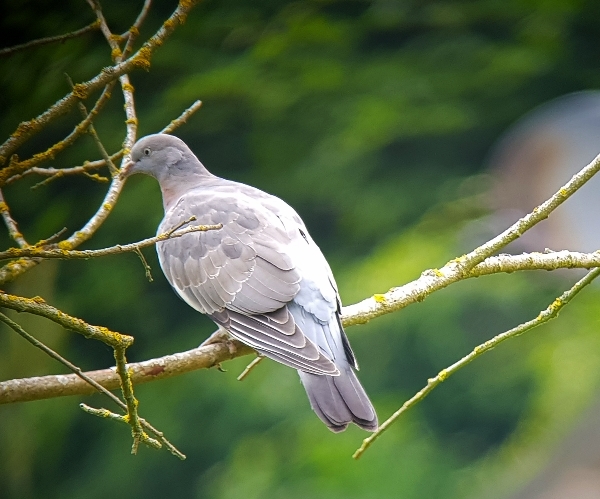 there was lots of these young Wood Pigeons around the area, don't we have enough of them already?

It was different story when we arrived at Cloughton Wyke (cove), the sea was alive with birdlife, we saw dozens of Guillemots, some Razorbills, lots of Kittiwakes, Herring Gulls, Gannets and Herring Gulls. It was buzzing out there.

Nigel and Lorna sat on bench whilst Mike and I continued along the shore, hoping to comnplete a circular walk taking in parts of the 'Cleveland Way' and the disused railway track called the Cinder Track. It wa tough ging with a lot of climbing up steps etc. but we made around in about an hour, we saw a Peregrine Falcon and not much else. 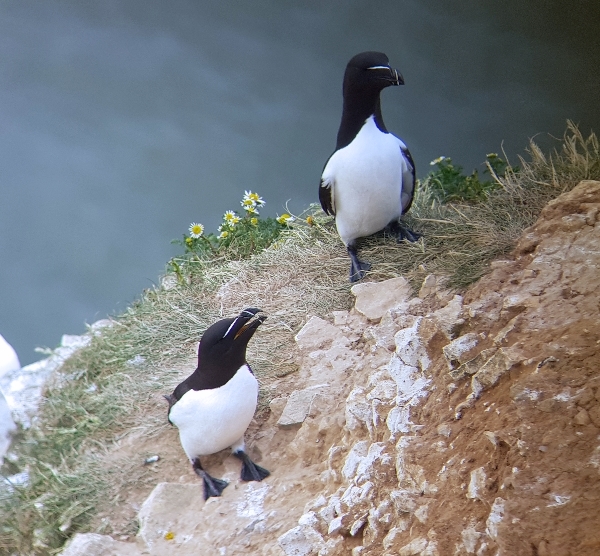 back on the original lane we found a small colony of Tree Sparrows which was nice, Nigel and Lorna told us they had seen them too. 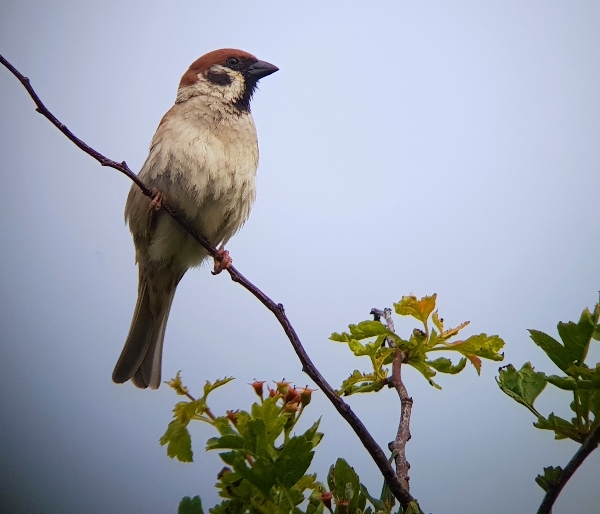 it was lovely to see so many Tree Sparrows 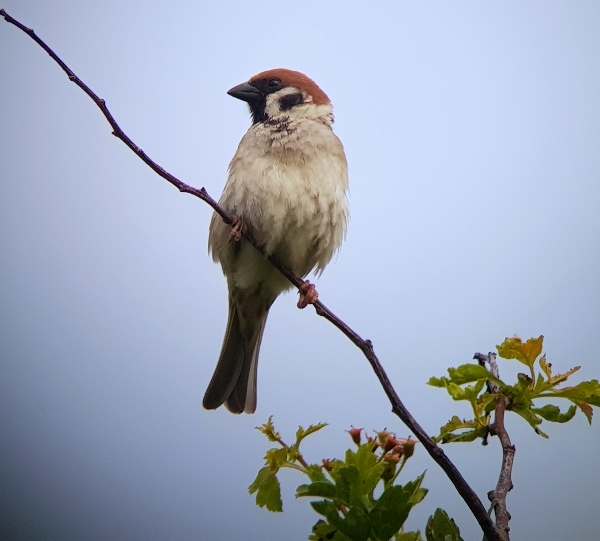 From there the birding and the weather went downhill, we checked out a forest area and a we took a short walk on some moorland, but it was getting quite dull and started to rain so we abandoned.

We all drove down to Scarborough and checked into our guest houses, we planned to meet Lorna and Mike again in the morning.

After a short break Nigel and I decide to visit Bempton Cliffs, it was after 6pm when we left for the 20 minute drive to the famous RSPB reserve, we had proir knowledge of the presence of a pair of Barn Owls that wer performing well at the reserve. 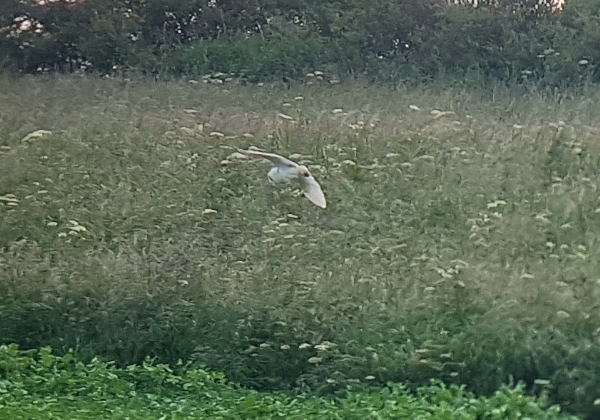 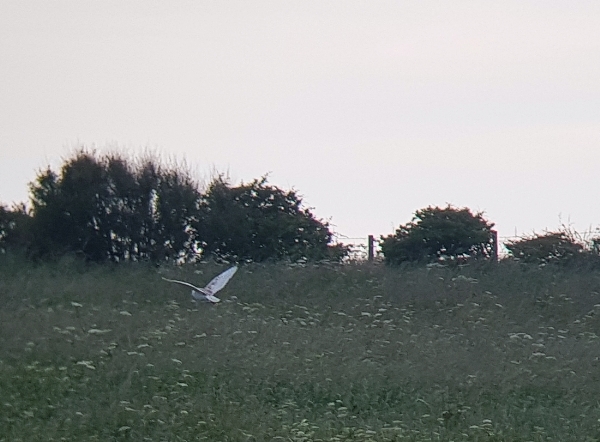 It was still quite busy when we got there the car parks were still quite full, we saw many Tree Sparrows flitting around the main buildings and all along the hedges. 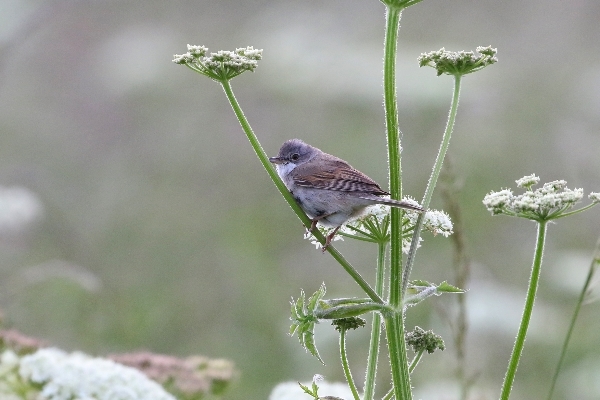 a Common Whitehtroat taken by Nigel

We were blown away once we reached the lookout places along the cliffs, it was a amazing!! A staggering number of seabirds were present, the sea was covered with them and every perching place on the cliffs seemed to be taken. The noise and smell was overwhelming, but the sight of so much movement and colour was truly spectacular. 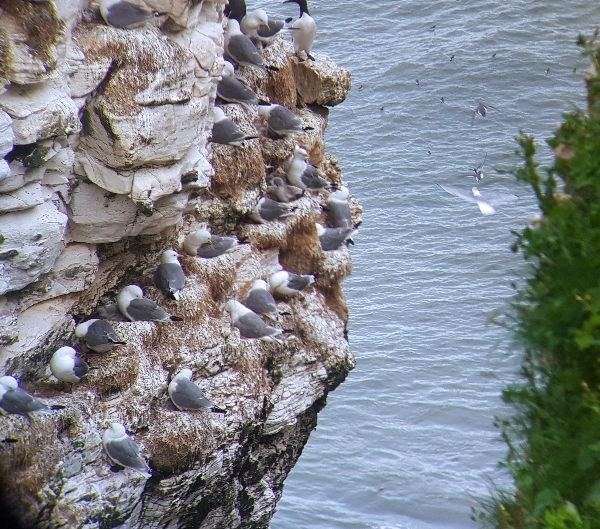 Kittiwakes at their nests - all of them had chicks

Gannets, Guillemots, Razorbills, Kittiwakes, Fulmars, Puffins and Herring Gulls filled every nook and cranny from top to bottom of all the visible cliffs, it was mesmerising. 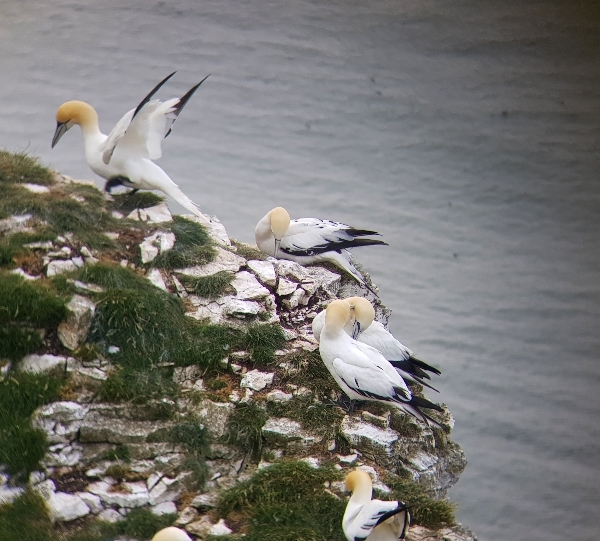 a few of the thousands of Gannets on the cliffs

The Barn Owl performed all the time we were there, but it was quite distant. We also saw Common Whitethroat, Reed Bunting, Goldfinches, Linnets and the ubiquitous Tree Sparrow.

We left around 8pm and got back to our guest room half an hour later. We were both far too tired to go out again looking for food so we ate snacks in the room and took an early night.