A return to TUJERING to look for a couple of species missing from our list was our morning's objective after we had enjoyed a 'proper' breakfast back at the Senegambia hotel. We arrived at 8am in clear weather with a rising temperature, it was already humid.

Within minutes we were watching one of our target species the Yellow Penduline Tit, we saw two of them in the scrub, a lovely little bird. Several other species were also noted during that first half hour, with Common Gonolek, Black-crowned Tchagra, Singing Cisticola and Velliot's Barbet all showing well. 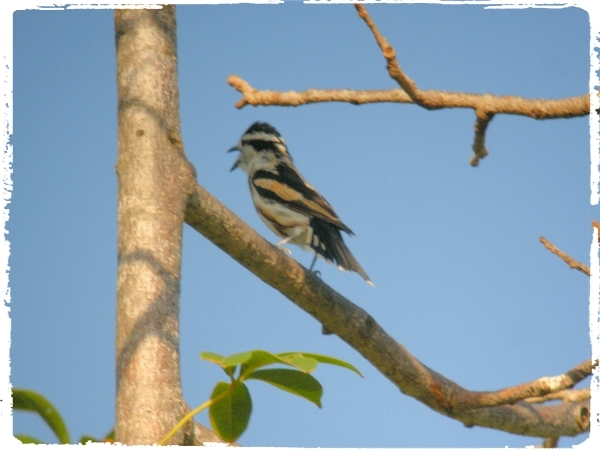 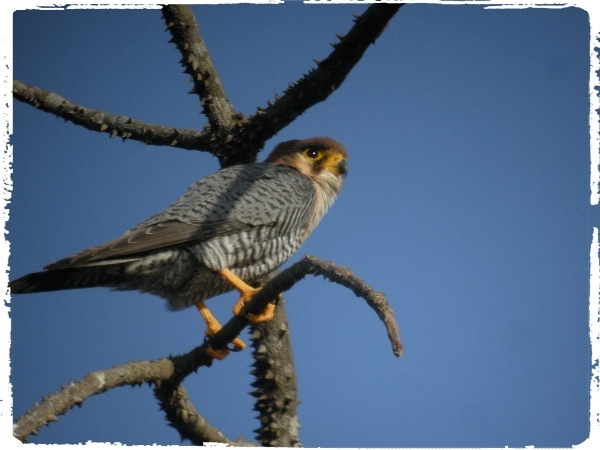 During the next hour we walked between small stands of young trees where Double-spurred Francolin, Brubru, Bearded Barbet, Lanner Falcon, Ring-necked Parakeet, Splendid & Violet Chested Sunbirds were seen, we also added our second new species of the day, Pied-winged Swallow. 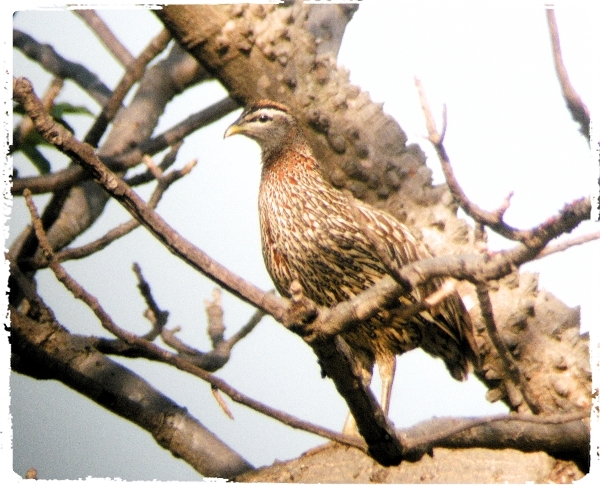 An area of small, walled cultivated fields provided our next excitement when Modou our guide discovered a pair of very showy White-fronted Black-Chats, we had been after this species on a number of occasions and Douglas, our Canadian group member was particularly pleased to see it. We also added Common Whitethroat to the list and saw Whinchat, Yellow Wagtail, Woodchat Shrike, two Ospreys, Fine-spotted Woodpecker, Bearded Barbet and a few common species especially doves. 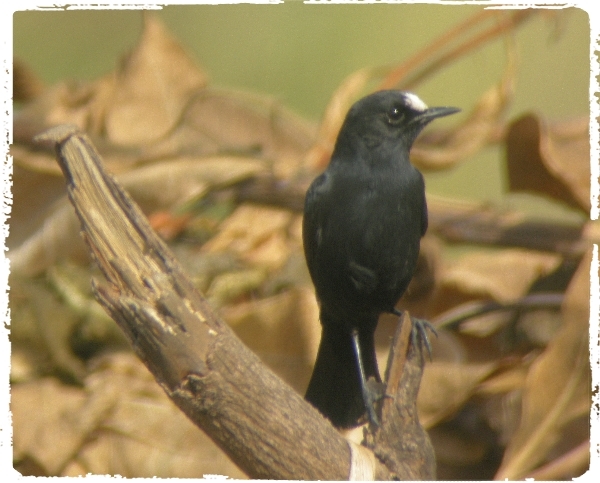 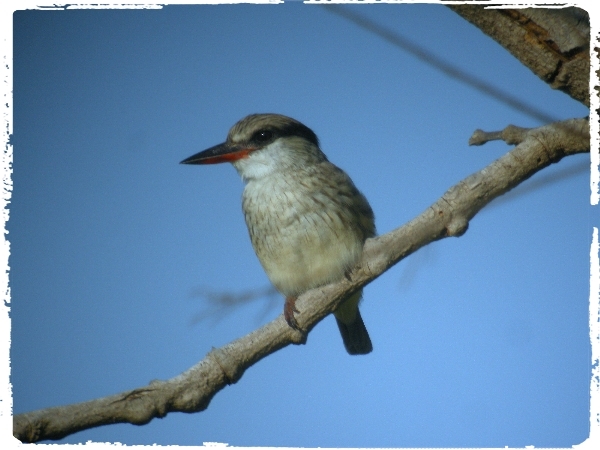 The heat increased and bird activity reduced so we walked back to the main track to catch our bus, we had walked for 3 1/2 hours in hot sunshine and needed a cold drink. We drove to Tanji, the next village and sat in the shade of a restaurant terrace drinking cold drinks, we ordered lunch which took an hour to arrive. 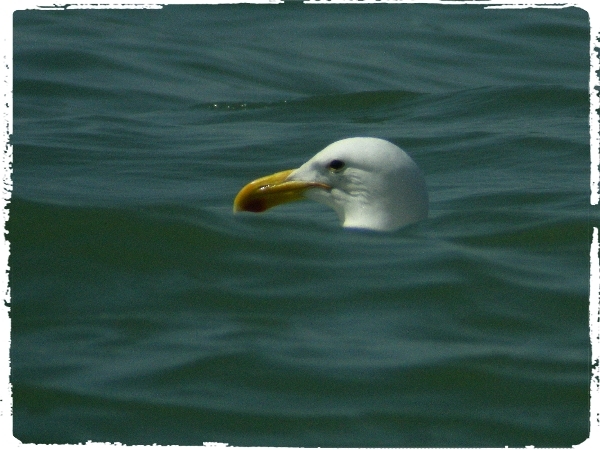 its amazing how this Kelp Gull swims with its body submerged! Or is it a trick of the waves?

It was 2pm when we set off on foot to walk to the gull roost at Tanji Beach, hundreds of birds were feeding in the sea and along the shore. The usual large numbers of Grey-headed Gulls were joined by Lesser -Black-backed Gulls and we found the huge Kelp Gull sitting in the water not too far offshore. 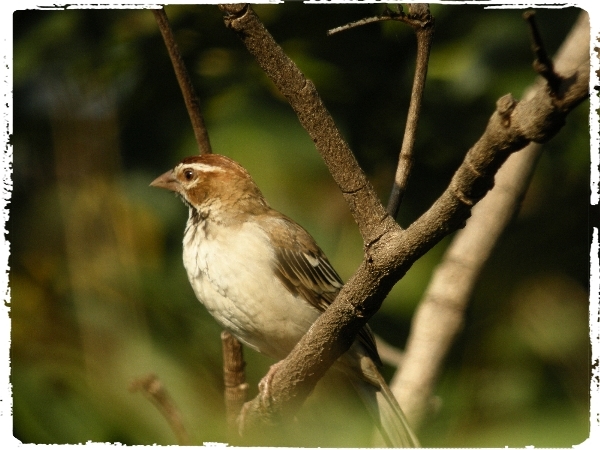 Sanderlings scurried ahead of us with Ruddy Turnstone, Bar-tailed Godwits and Grey Plover as we walked out to the sand-bar gull-roost. Masses of Terns produced another trip-tick when we found a bunch of Little Terns with Common, Sandwich, Lesser-crested, Caspian and Royal Terns. A dozen Ringed Plovers fed on the soft sand across the river-mouth and to our great delight we found three White-fronted Plovers, another newbie.

The American Golden Plover we had discovered at Tanji a few days ago was nowhere to be seen but an odd looking Whimbrel had us pondering! After we walked back to the restaurant we jumped onto the bus and drove to Tanji Bird Reserve where we had another cold drink whilst watching their 'drinking pools'. A Snowy-crowned Robin-Chat and a Paradise Flycatcher were the best of the sightings there. 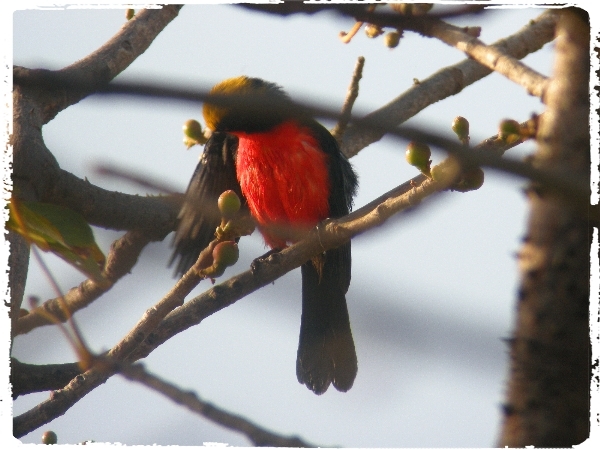 my only picture of this beautiful but shy creature - Common Gonolek

From the bird reserve we had good views over the Tangi Beach a little further north than the gull roost site, we added our last new trip-tick of the day in the shape of a Pomerine Skua, that made 8 new species for the day and brought the trip total to 294.

We drove back to the hotel and finished the day at 5pm. Dinner was at 7pm. It was so nice to have proper room facilities once again including hot water and air-con.