I just love the first morning in the Gambia, we ate breakfast outside in a lovely temperature surrounded by lush gardens, serenaded by dozens of birds, it is magical. We watched Palm Swifts hawking above us with Yellow-billed Kites and Hooded Vultures ever present. We heard Common Gonolek and added Broad-billed Roller to our list, Cattle Egrets were coming down to feed on scraps from the breakfast tables. 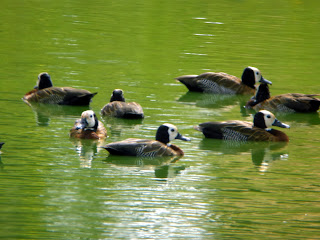 Our first birding venue was the Bridge over the Kotu Stream, we were blown away by the number of species seen there it was simply fantastic. Malachite and Pied Kingfishers showed down to 3 meters whilst the Giant Kingfisher stayed further afield. The usual crop of waders were present, several of them were familiar to us but Doug from Canada and Jeanne from South Africa were overwhelmed and bemused respectively. The sewer farm adjacent to the rice fields was a bit of a disappointment, the pits had been dredged and cleared of 90% of its vegetation. In this barren environment we added Black-winged Stilt, Little Grebe, African Jacana, White-faced Whistling Duck, Common Sandpiper and not much else. 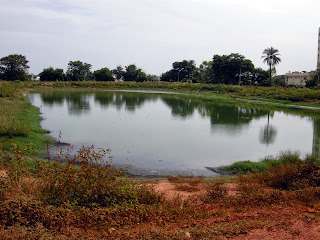 View of the Ponds at the SEWERAGE farm 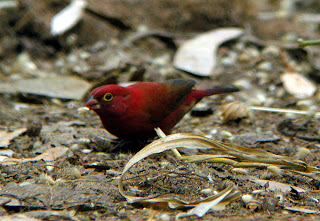 We were collected by our driver Ali and driven back to the Kotu area where we took a short walk along the 'Casino Track' and that is where our birding stepped up a level.

A small warbler was seen by Steve hopping about in an acacia tree, it looked at first like a Willow Warbler with a well marked supercillium, then it showed well and what a shock!! It was a full-on YELLOW-BROWED WARBLER, an outstanding find, I think the last sighting of one these in the Gambia was 2005, eleven years ago. We speculated that this bird was one of the recent influx to western Europe of this species, it should be wintering in East Africa and Southern Asia. 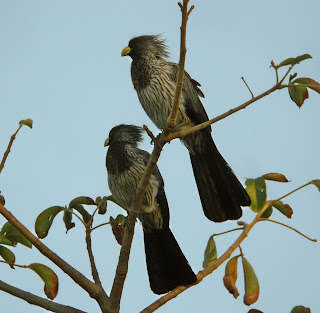 To follow that sighting would be hard, however, we enjoyed another hour looking around a pool where we found African Darter, Greenshank, Common Moorhen, Purple Heron, Spur-winged Plover and our target species the Black Crake.

From there we returned to the hotel for a long lunch, it really was hot and sticky by now.

We reconvened at 4pm, the heat had eased off and the light was not so harsh. A short walk from the hotel got us to Bijilo Forest nature reserve, we found Black-capped Babbler on the edge of the forest. Our second shock of the day came next. For some reason the government have given permission to uproot a large section of the forest for development, what a disaster! The bulldozers were in. 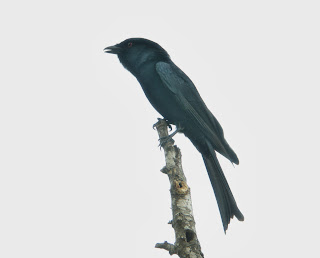 Far fewer birds were seen than on past visits the forest was eventually 'found' after walking for quite a way. We did eventually find a number of species including the beautiful Swallow-tail Bee-eater, also lots of Little Bee-eaters, Green Woodhoopoe, African Grey Hornbill, African Thrush, Black-necked Weavers and we heard Oriole Warbler. By far the best sighting was of Stone Partridge, a little beauty sat on a branch low to ground calling loudly. We returned to the hotel at 6:30pm just as it was getting dark. Dinner was taken an hour later, we added up the species total after calling the bird log, 92 seen today, terrific!