Another fantastic morning in this birding paradise called the Gambia. After a frugal breakfast of bread, jam, cheese-triangles and an omelette we set off to the ferry for our trip back to the north shore. The vehicle queue was quite large so we went across as foot-passengers and birded around the river until the bus came over some 45 minutes later. We saw a good variety of species, the large African Harrier-Hawk flew over carrying a lizard for breakfast, Grey Kestrels dashed passed us, whilst Senegal Coucal, Yellow-billed Shrike and Vinaceous Dove sat in the same bush. We watched Grey-backed Cameroptera, Velliot's Barbet and several other species before boarding the bus. 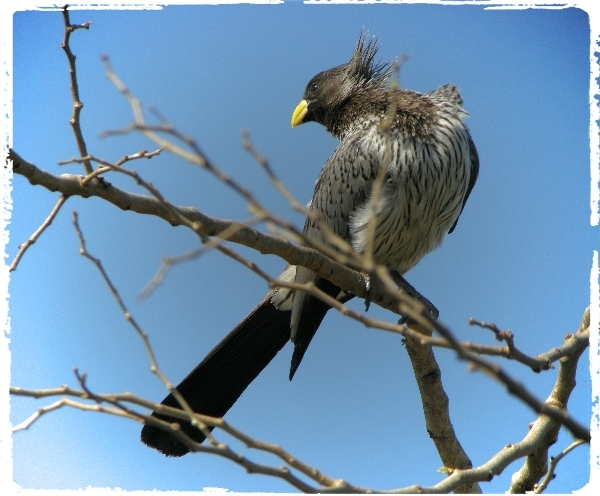 Apart from the large colony of Red-throated Bee-eaters Wassu quarry is a good place to look for Carmine Bee-eaters especially in the morning, our short search of the area produced a number of them within minutes, what a stunning looking beast. We also watched the Red-throated and the Green Bee-eaters along with large numbers of Northern Sahel Whydah, Northern Red Bishops, White Rumped Seedeaters, Cut-throats, Waxbills and weavers. 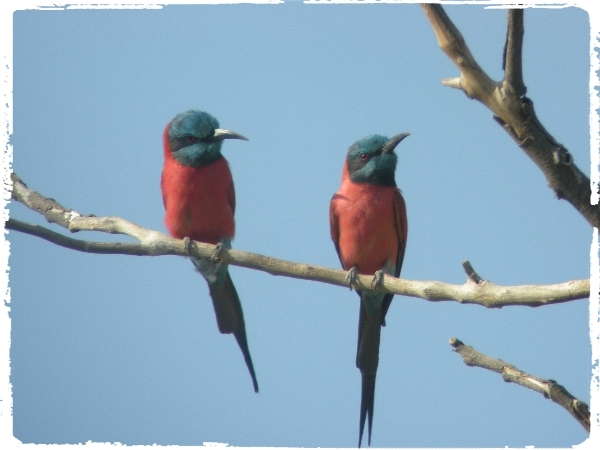 Carmine Bee-eaters, we saw only half a dozen of these beauties

The sky was full of birds too, a number of raptors began to appear and including Dark Chanting Goshawk & Grasshopper Buzzard, which were seen along the way, we listed ten species this morning.

First a pair of African Hawk-Eagles showed really well then African Harrier-Hawk came over and Beaudouin's Eagle hovered above us. A Lanner Falcon dive-bombed another Beaudouin's Eagle just before we sighted a Martial Eagle carrying prey (the prey looked like a squirrel),  phew, what a purple patch. Also up there with the eagles was Hooded, Ruppell's & White-backed Vultures as well as Sand Martin, Little Swift, Mottled Spintail and both Red-chested & Red-rumped Swallows. Abyssinian Rollers were everywhere with Rufous-crowned Roller seen on the telephone wires. 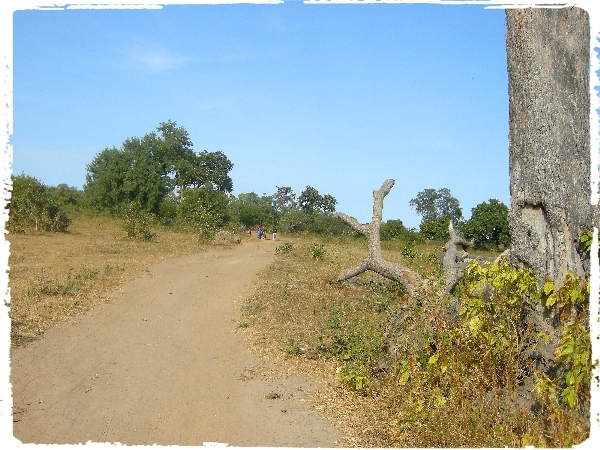 It was getting very hot so we gave up and drove back to the ferry, again there was a long delay so we hired a private boat to take us to our camp leaving Ali the driver and the bus in the queue. A long lunch ensued and we met again at 3pm back at the jetty in time to board a boat for our private river cruise, it was still stifling hot at this stage. 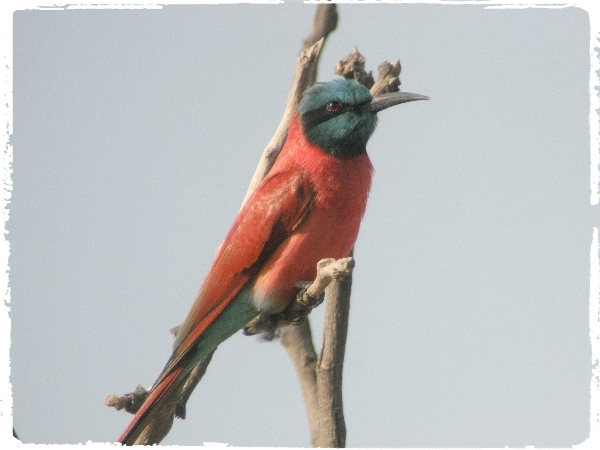 I couldn't resist putting another Carmine picture in

Out on the river a cool breeze was most welcomed, we relaxed and began to enjoy a series of sightings over the next three hours as we motored down the river hugging the shore on either side. Highlights during the first hour include sightings of an African Fish Eagle which dropped into the water on a fishing expedition, a Palm-nut Vulture, several Night Herons roosting and a number of Swamp Flycatchers feeding from overhanging branches. 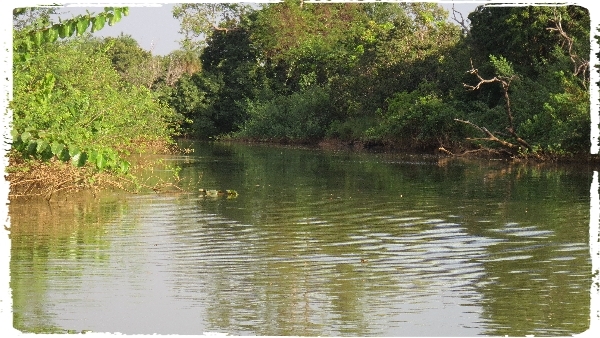 one of the creeks we drifted into

We ventured up a side creek where Kingfishers were a prominent feature,  Malachite, Woodland, Grey-headed and Blue-breasted all made it onto the list, whilst the main target Shining Blue remained elusive. It was on the return journey from this creek visit that we made our best sighting when we joined another birding boat-party who had just seen an African Finfoot.

At this stage our engine had some trouble and for fifteen frustrating minutes we drifted away from the sighting whilst the other group were getting occasional views. Eventually we got going and returned to the site just as the other boat left and to our great relief the bird came out from hiding. We had the most fantastic views of it out in the open, what a colourful bird which looks ten times better in real life than its depiction in the field guide. 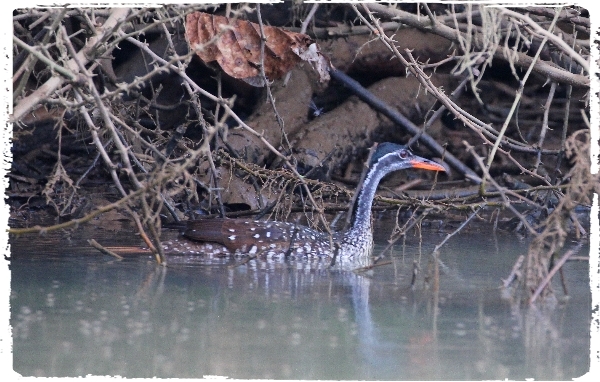 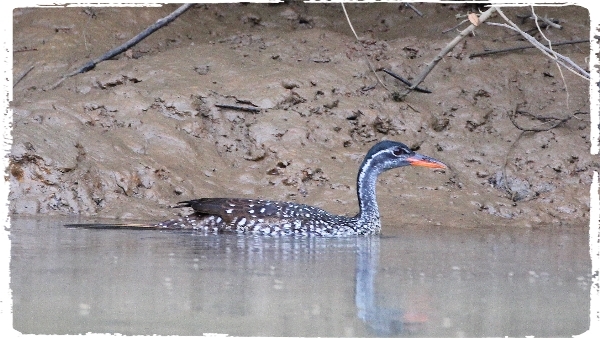 Next we ventured further down river adding more species to the list, Yellow-throated Leaf-love, Little and Red-throated Bee-eaters, Hammerkop, Senegal Thick-knee, Wattled Lapwing and Common Gonolek. We also saw several Monitor Lizards, Red-Colobus Monkeys, Green Vervet Monkeys and a huge Hippopotomus, this beast rose up out of the water and breached like a whale with gaping jaws - I think we got a little too close so we beat a hasty retreat. 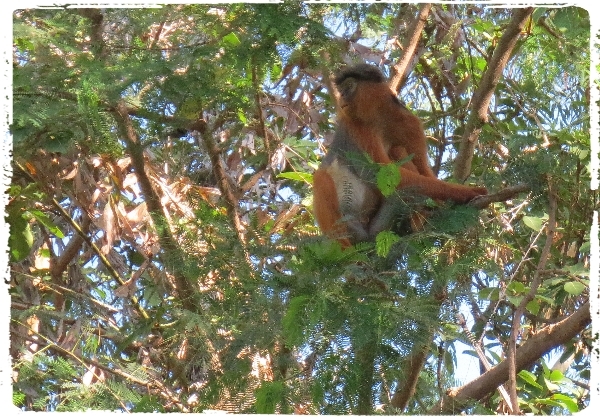 The light began to fade as we returned upriver but before it was too bad we notched our second most wanted species, the Shining Blue Kingfisher. We had a number of brief views of them as they dashed from perch to perch and we did see it for a short time perched on over-hanging branches but it was difficult and you had to be quick with your bins, we all saw one but not everyone had satisfactory views before bad light thwarted our efforts. 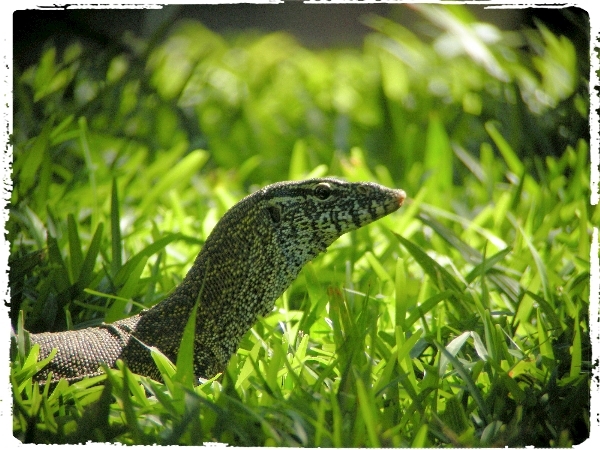 A beautiful sunset lit up the sky behind us as we made it back to the jetty behind our camp on Georgetown Island. We logged just over 40 species on the trip with the two main must-see birds in the bag and  a scary Hippo on the mammal list!

Dinner was at 8 pm so we had time to call the log beforehand and enjoy a cold drink at the same time. We now had 275 species on our list, tomorrow we head back to Tendaba along the south bank this time.