I had a fantastic couple of hours this morning walking along my favourite track near San Pablo. I saw several large flocks of post-breeding House Sparrows with a few Spanish Sparrows thrown in. Flocks of Spotless Starlings, Greenfinches, Goldfinches, Linnets and Serins were also noted.

It was migrants that I was after and soon I was watching Spotted Flycatchers, at least six were along one fence and below them I watched Sardinian Warblers and a few Chiffchaff sp. 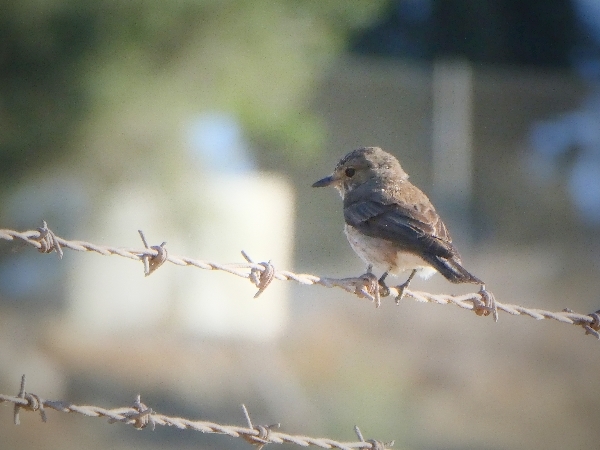 As I made way along the track I started seeing Short-toed Eagles sitting on the pylons or hunting over the dry fields, one or two Booted Eagles drifted over too and many Griffon Vultures circled in the distance. 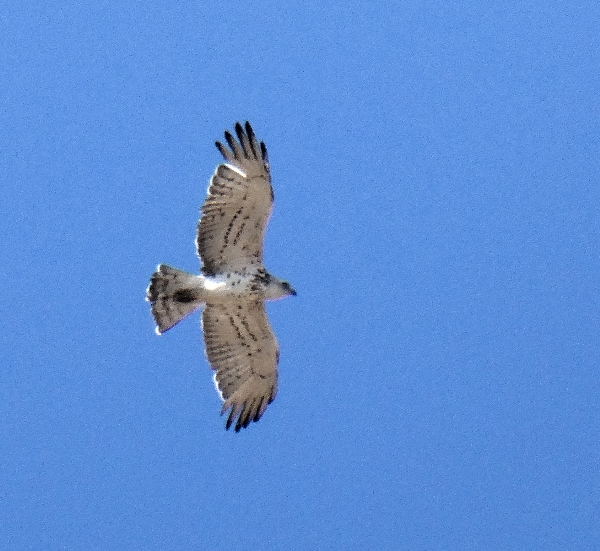 Short-toed Eagle - juvenile showing much white around the head

At the usual spot where the the scrub bushes get a little thicker I saw a Rufous Bush Robin dash across the track, it took me a while to relocate it but when I did I had a great display from a male bird. I watched this individual for at least 20 minutes whilst it feed on the ground and then again whilst it sat preening. My pictures were all phone-scoped using my Samsung S8+ and my Kowa 883 scope. 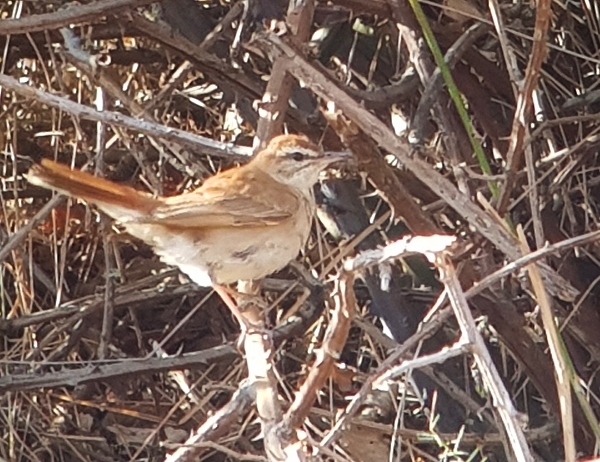 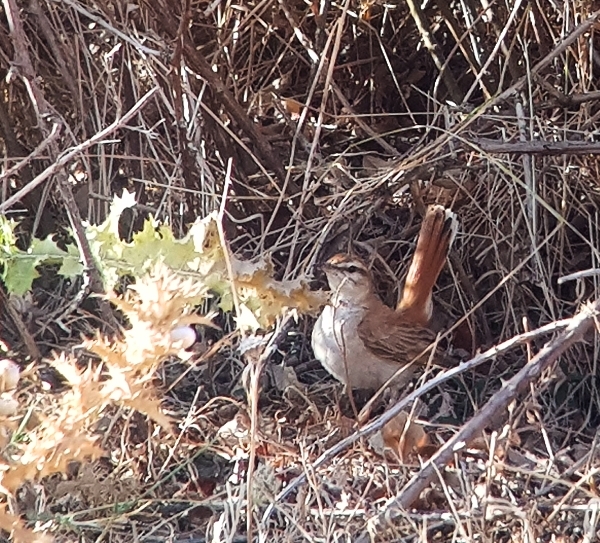 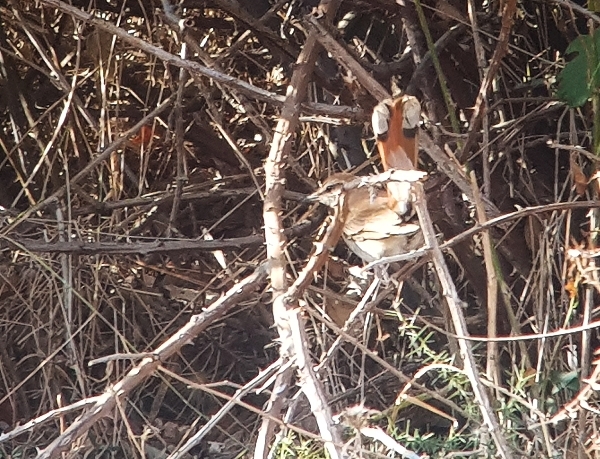 As I walked up the hill to where the scrub gives way to open fields I saw more raptors, at least 10 Lesser Kestrels and more Short-toed Eagles. Woodchat Shrikes, both adults and juveniles, flitted from bush to telegraph wire and back again, flocks of up to 40 European Bee-eaters called noisily as they flew over, but I never saw a single Black Kite which was surprising. 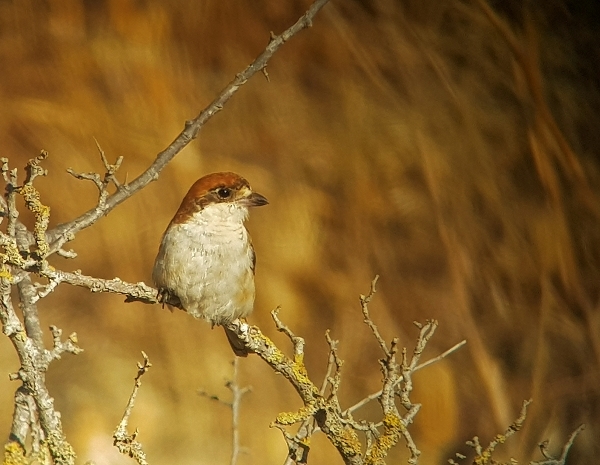 I hadn't walked far up the hill when I noticed a Turtle Dove on the wire and further along a strange shape sat silhouetted against the sky. I recognised it at once, a Roller!!  This passage migrant only appears very rarely in our area and I have never seen one along this track before. Wow! I walked quickly back to the car and drove to the top of the hill to try to get a photograph of it.

As luck would have it other cars and even trucks came along the track and each one disturbed the bird, I never got even close to it. All my pictures were distant and blurred with heat haze. I did watch it through the scope for quite a while, it showed me how agile it was for a big bird by taking a lizard which must have been 50 meter from it. The Roller dashed across the track from the power line and swooped down on the lizard, amazing eyesight never mind the perfect agility. 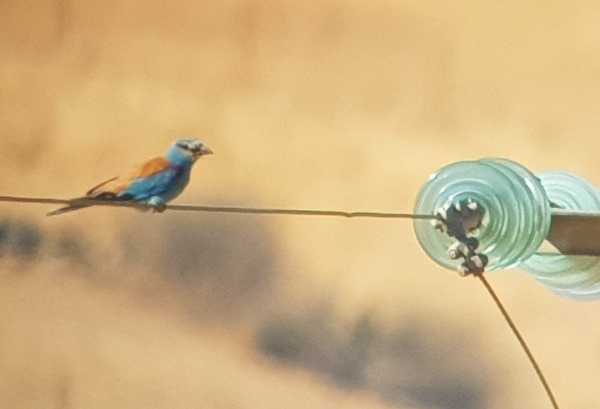 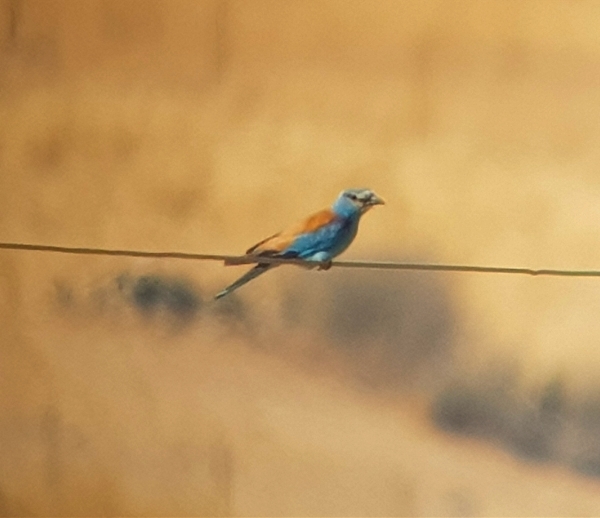 record shots of the Roller - I hope Kevin Jones doesn't see these!!!

I decide to drive the full length of the track into the 'hamlet' of Marchenilla where I was hoping to get a drink of cold water and a nice cup of coffee. The venta was shut!! Ha! So, I drove 200 meters further and parked by the river Hozgargante where I hoped to photgraph a few dragonflies. 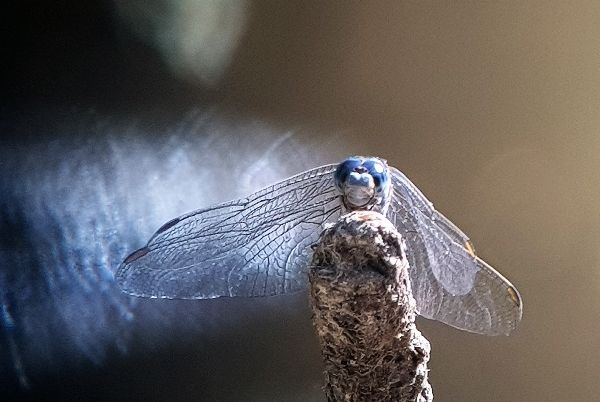 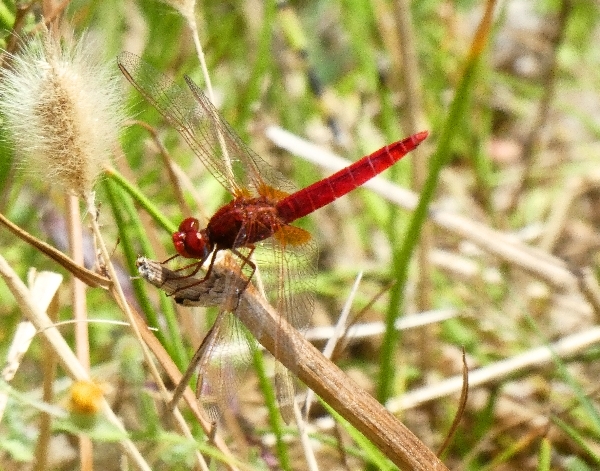 The river was now just a series of disconnected pools which was perfect for some drongonfly species. As I stalked the dragonflies I heard Blackcap, 'tekking' and an Iberian Chiffchaff in full song. Many Blue Tits, Chiffchaffs, Blackcaps and Goldfinches were coming down for a drink. 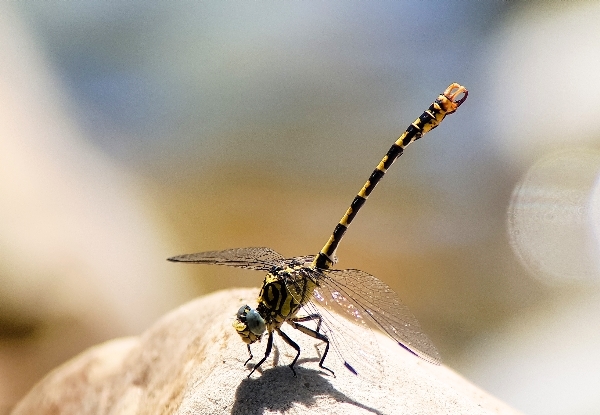 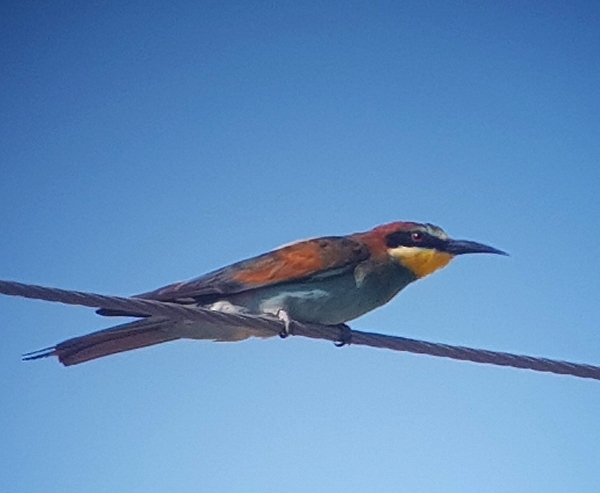 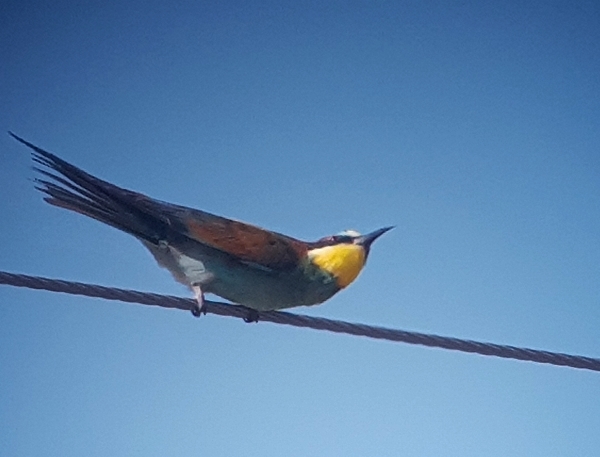 Having no water with me and no food I headed back for home around 12 noon, I decided to drive the Marchenilla track to see if I could get the Roller in the can. This time I was a little luckier but still my shots were very bad. A bonus was a juvenile Montagu's Harrier on the ground, it didn't fly far when I inadvertantly flushed it and a second appeared over the nearest hill. 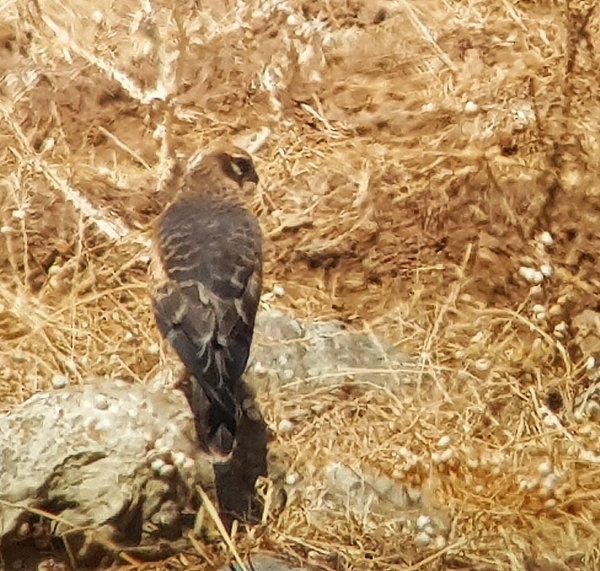 A flock of 25 Common Ravens was impressive and a scraggy looking Little Owl was sitting out in the heat of the day, a 'Brit abroad' you may think? This Iberian Shrike came down onto mthe track with some Bee-eaters, they were picking up grit, he was just being nosy! 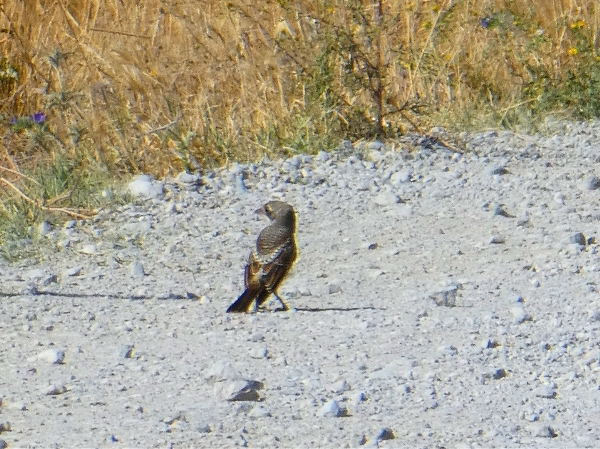 I was back home by 1pm and sat with a nice cold drink before making lunch, Dawn was still in Ronda, at the shops with the credit card!!!!! Yikes, I'd better take a nap.