At 8am I met up with John and Jim on the outskirts of Casares where they live, I had driven down from Gaucin. It was dull and overcast, with thick cloud cover over Sierra Crestellina, light rain dotted the windscreen as I approached the meeting place.

From Casares we drove down the Genal Valley and near the river we kicked up two Turtle Doves from off the narrow lane and we stopped to look at about 20 Bee-eaters along the fences. As we pulled over a flock of approx. 100 Bee-eaters alighted from a eucalyptus clump nearby, what a sight and what a noise.

We crossed the dry riverbed of the Genal and set off for the Marchenilla Track on dirt roads all the way. We found a Red-necked Nightjar on the track, it had met with an untimely death earlier today as it was still quite fresh.  Common Buzzard was noted a couple of times. 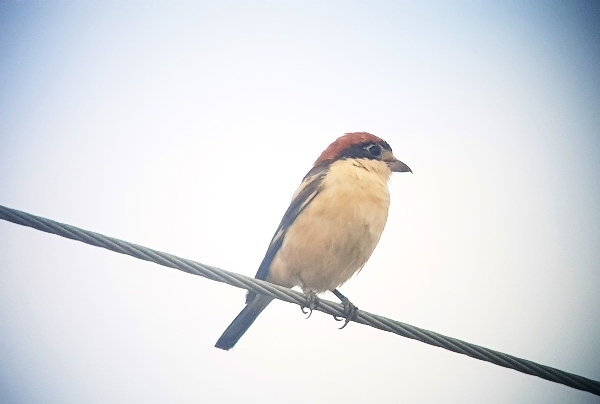 On the Marchenilla Track we hoped to see Rufous Bush Robin, John still needed it for his year list, but it was now very late in the breeding season and we didn’t hold much hope of seeing one. We saw another two Turtle Doves along the first part of the track, also two Booted Eagles and lots of Sparrow and Finch Flocks. Generally it was very quiet, very few birds on the wires and fences. 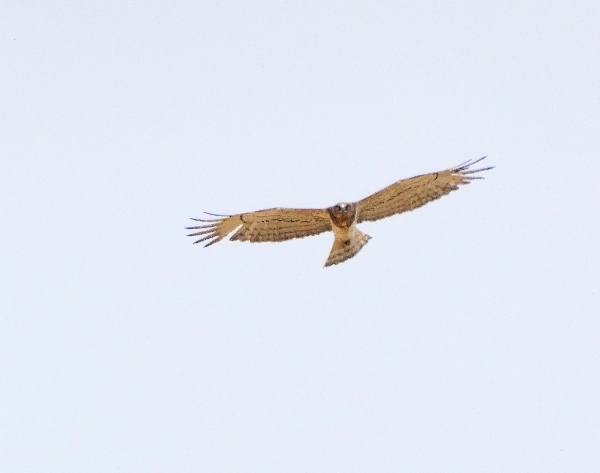 The Robin didn’t show, it wasn’t there, we were too late. The  leucistic Sardinian Warbler (almost all white) was still present and we found Woodchat Shrike, Crested Lark, we heard the ‘croaking’ call of Common Nightingale and both distant Short-toed Eagles and Common Kestrel were also present.

Other sightings included 3 Eurasian Hoopoes, Barn Swallows, Griffon Vulture, more Booted Eagles and a single Black Kite. A large flock of Corn Buntings was nice to see and I watched a juvenile Woodchat Shrike impale a Grasshopper on a thorn in the hedge, obviously practicing the trick of making a larder. (I was hoping it was a Corn Bunting on the spike!!!). 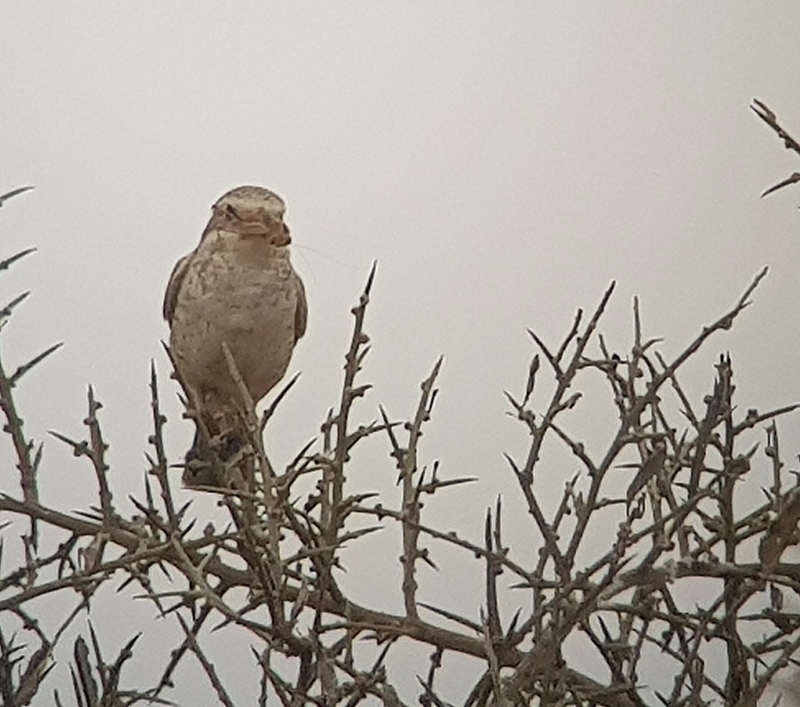 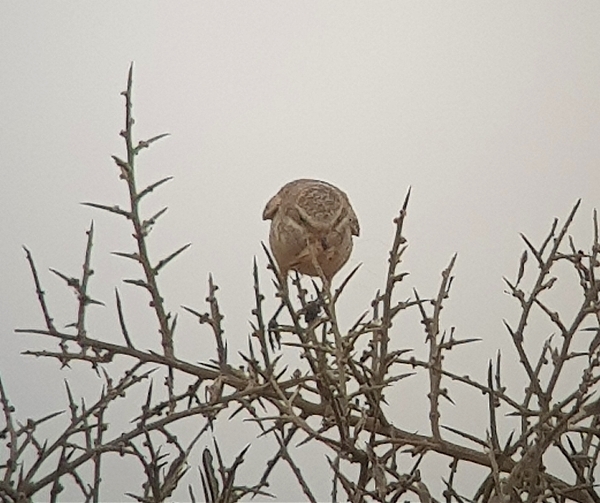 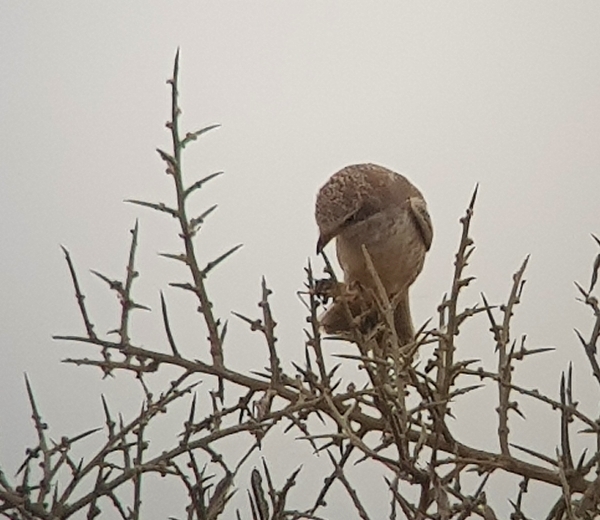 After returning to the car we had a cup of coffee, courtesy of Penny, John’s wife, who also supplied chocolate chip biscuits, yummy!

We then drove the entire track to Marchenilla stopping to look at Common Buzzard, a great find was a European Roller, we had super views of it as it sat on the dry thistle heads in a field. 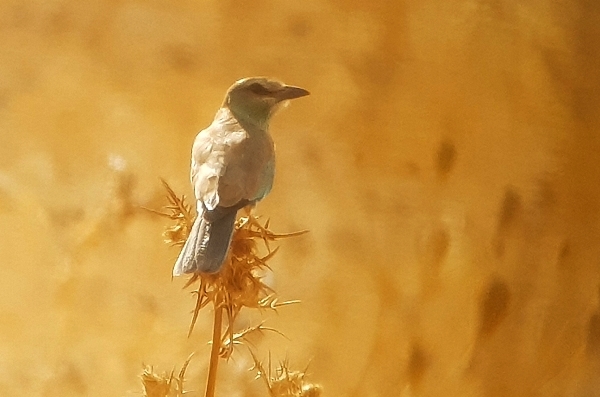 European Roller on the thistles 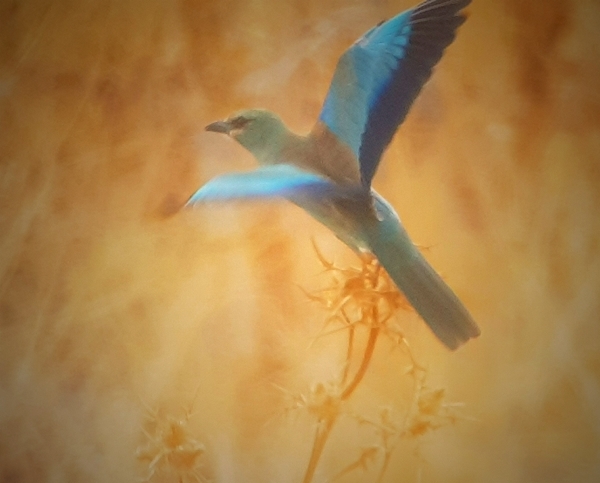 From Marchenilla we drove to the coast at Palmones to look for migrating waders on the salt marsh and along the banks of the tidal Rio Palmones. We arrived a couple of hours before high tide and parked a kilometer from the river mouth and walked along the paved promenade. The thick cloud cover had lifted by now, it became very hot and humid but remained misty for the next couple of hours. 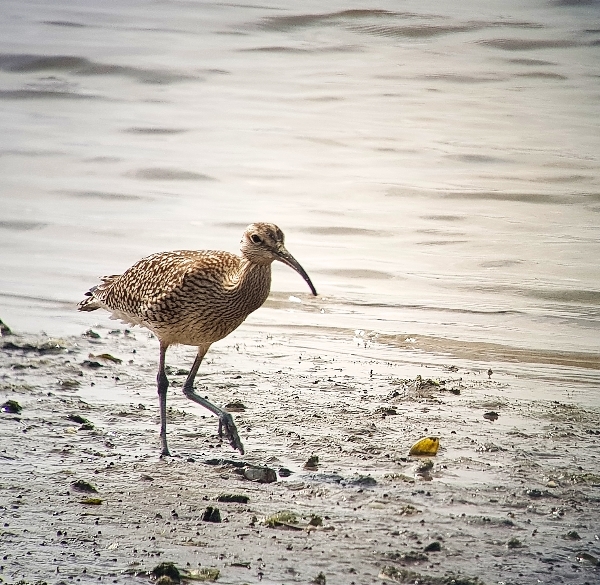 We listed 9 species of waders, none of them in great numbers, we started with Greenshank, Whimbrel (we saw 4 altogether), Common Sandpiper 6+, Common Redshank, Greater Ringed Plover (20+) and Dunlin (2). 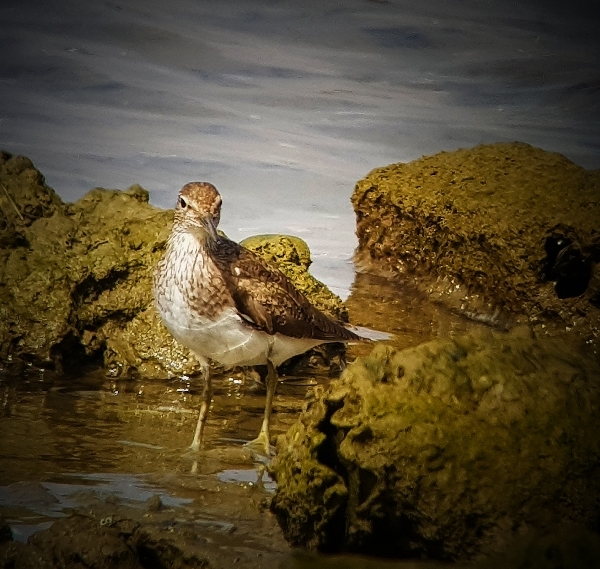 Further down river we added Little Egret, Kentish Plover and singles of both Little Stint and Curlew Sandpiper. A number of Yellow-legged Gulls loafed on the sand bar with a few Black-headed Gulls and not much else. A single Glossy Ibis flew over the marsh several times, we also saw groups of Grey Herons and a larger group of White Storks in the middle of the marsh. 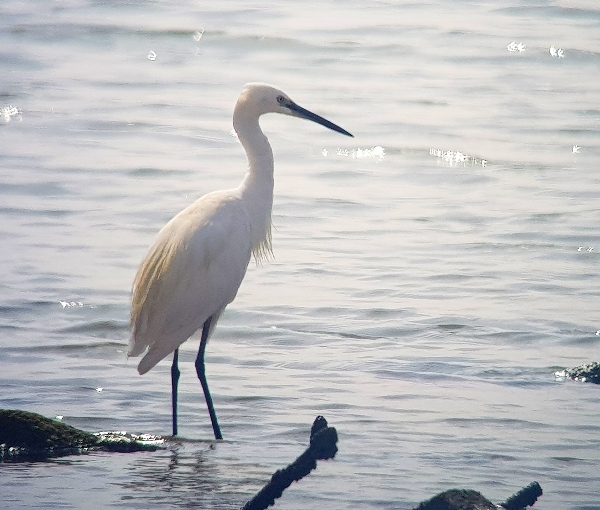 We took a second coffee in a bar on the side of the promenade and just before we left a flock of gulls landed on the sand bar, we counted 23 Black-headed Gulls and 7 Sandwich Terns. We left the area around 1:30pm and headed for home talking about the DIY jobs we all had instore for us over the next few weeks.