AN AFTERNOON AT THE RIVER

WEATHER:  Hot and sunny with a lovely breeze

We drove down to Estacion Cortes on another very hot day, Dawn spotted a beautiful adult Short-toed Eagle circling low over the pueblo Estacion Cortes. On arrival we realised that the river level was much higher and the flow had reduced, we assumed that the water level has been changed by a closing up of the dam's sluice gates.
After settling down under our favourite tree we set up the scope and found our first Sandpiper of the Autumn for this location. It was a Common Sandpiper feeding on the opposite bank where a Kingfisher dashed by soon afterwards. 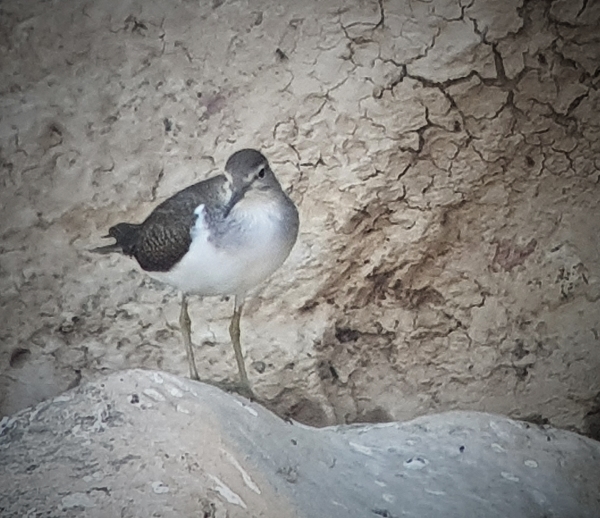 Common Sandpiper - the first of the autumn for this river location 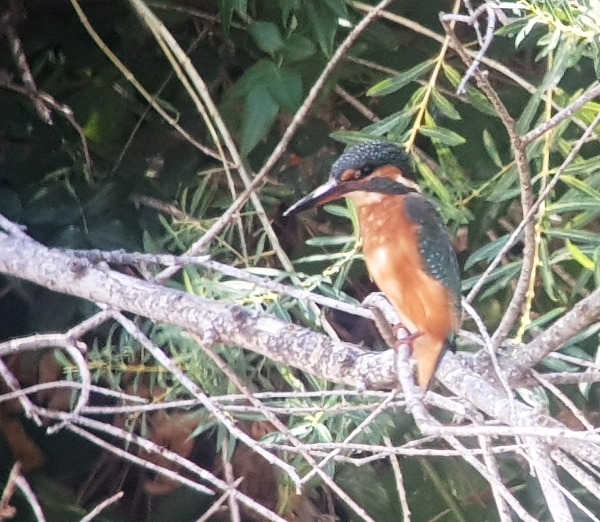 I have to include a picture of this beauty - Common Kingfisher
Several birds visited the tree that we were perched under, Short-toed Treecreepeers were very obliging and flew down the main trunk to ground level to work up the trunk foraging for insects. We also saw Bonelli's Warbler, Iberian Chiffchaff (Identified when it gave a single burst of song), Long-tailed Tit, Eurasian Nuthatch and a juvenile Great Spotted Woodpecker. 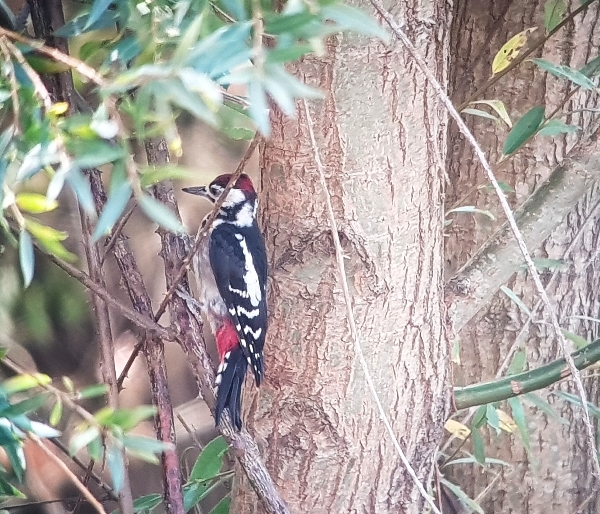 juvenile Great Spotted Woodpecker - with an all-red head
More Kingfisher sightings were made along with Grey Wagtail, Willow Warbler, Cirl Bunting, Serin, and lots of Goldfinches. A few Bee-eaters flew over and the breeding Booted Eagles called just a few times and appeared only twice. 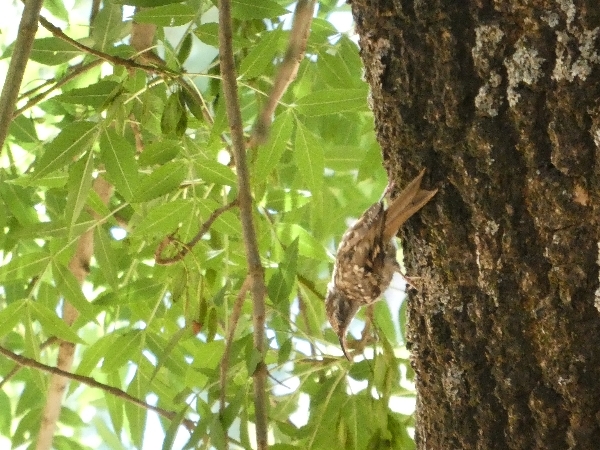 Short-toed Treecreeper
It was around 3pm when a second Common Sandpiper flew in, it took another 10 minutes for them to get together, in the meantime I added Grrenfinch, White Wagtail, more Serins and a moulting adult Cirl Bunting to the list. The wind increased, great bursts came up the valley lifting dust and blowing my hair out of place. 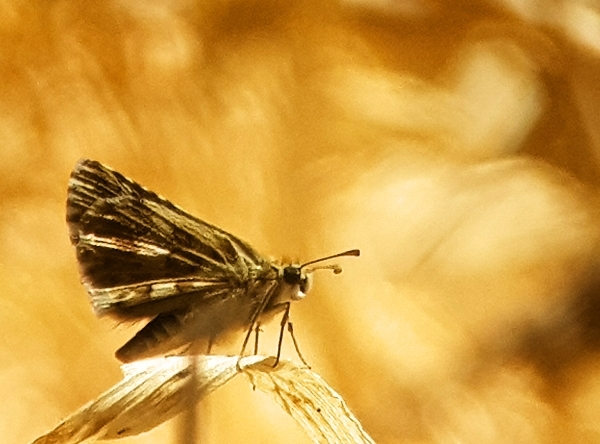 Sage Skipper
At 3:30pm our good friend John arrived on his motorbike. This scholar and gentleman, is a budding ornithologist, he arrived with 'mucho dusto' bringing his binoculars and his Collin's Bird Guide. With renewed vigour and an extra pair of eyes we scanned the river for more species and more species were soon on the list. 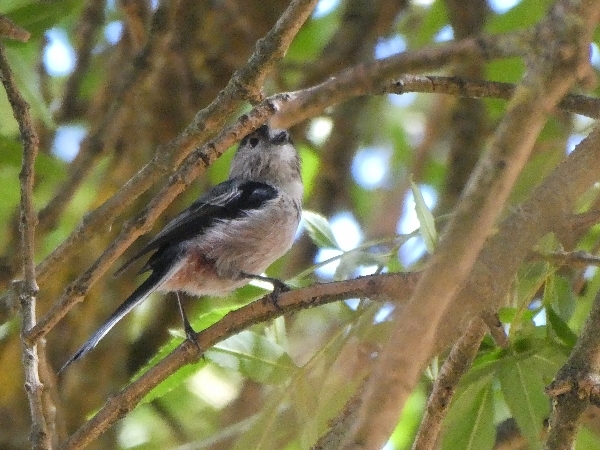 Long-tailed Tit - feeding just above our heads
Another pair of Sandpipers dropped in and much to our delight they were Green Sandpipers.  John spotted them first and pointed out a perched bird shown below, of course, he knew exactly what they were! 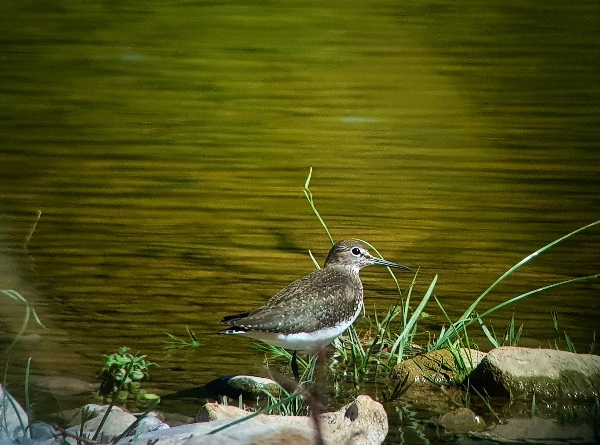 one of the Green Sandpipers
Several 'new' birds dropped down to drink,  a Melodious Warbler was nice to see and my first Common Whitethroat of the autumn. We also added Blackcap, Greenfinch, Cetti's Warbler, Sardinian Warbler and large groups of  House Martins with Barn Swallows and the odd Common Swift swooped down to skim off a mouth full of water before circling round to do it again. I remeber last year a young House Martin got it wrong and plunged into the water and before I could rescue it, it managed to swim ashore and clamber onto a rock to dry out. 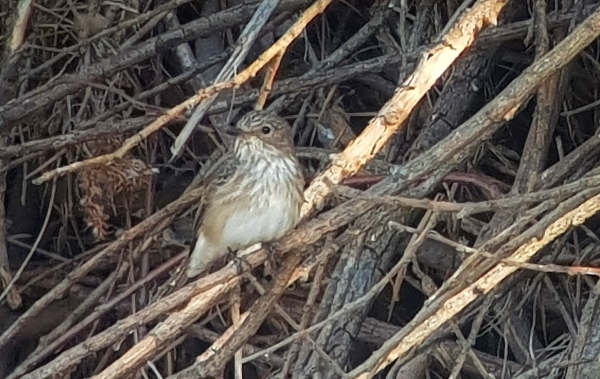 Spotted Flycatcher
John left around 5pm we stayed another hour, John missed a very close view of a Stonechat, also a Spotted Flycatcher and a Bonelli's Warbler almost joined our picnic as it fed just above our heads. It was another great day down by the river. 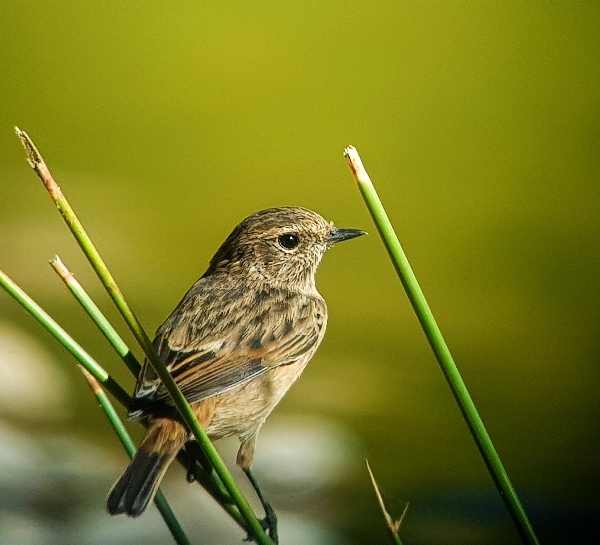