GOING HOME - SPAIN BACK TO THE UK

We spent most of the day on Sunday making the journey from Gaucin to Sepulveda which is found about 140 kilometers north of Madrid. The weather was perfect just clear blue sky all the way, I expected to see around 30 species of birds from the car but fell far short of that! The best sighting was of Azure-winged Magpies near Granada, Short-toed Eagles near the same area and Griffon Vultures are always a magnificent sight. I intended to stop at Laguna Dulce near Campillos but it had dried up completely, the first time this has happened since the winter rains of 2009/10. Other birds of note were Montagu’s Harrier, Raven and not much else.

We arrived at Sepulveda in the late afternoon in glorious sunshine in perfect light. This beautiful village dates back to the 10th Century and many of the buildings are surviving antiquities of various ages. We stayed in a small hotel in the main plaza with a stunning view over the nearby Gorge. 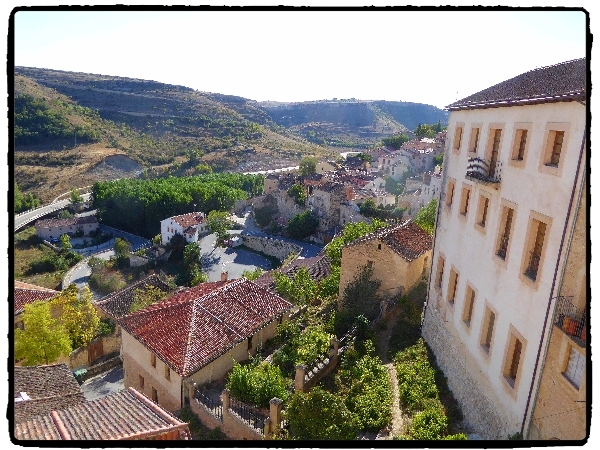 the view from our hotel room in Sepulveda

A flock of Red-billed Chough flew over as I stepped onto our balcony, a good omen, so we quickly settled in and then went for a walk.

The road we followed led us out of the village down towards the gorge, the bushes and trees were surprisingly full of birds, apart from hundreds of House Sparrows and mixed flocks of Common and Spotless Starlings we saw Melodious Warbler, Blackcap, Garden Warbler, Serin, White Wagtail and Black Redstart. Near the gorge we found Carrion Crow, Common Magpie and lots of Griffon Vultures with one Booted Eagle.

I got up in the dark at 7am and drove to the natural park called Hoces de Rio Duraton which primarily protects the fantastic gorge but also a large area of ‘steppe’ where the rare Dupont’s Lark still hangs on. I took the scenic route (by mistake) which took a lot longer to get there than I anticipated. However my misfortune turned into triumphant joy as I saw along the way my first ever, live, Beech Martin! This European cousin of the Pine Martin dashed across the road and leapt some 3 meters up an embankment onto to rock. I also saw many Roe Deer which were rather underwhelming after the Martin sighting. 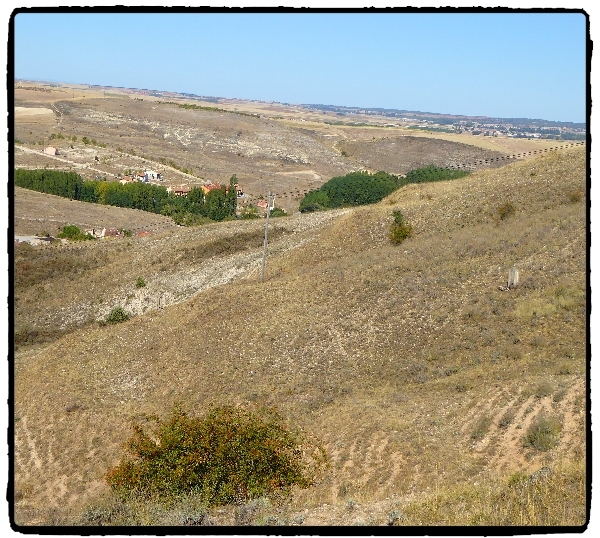 the countryside around Sepulveda and a view of the gorge below 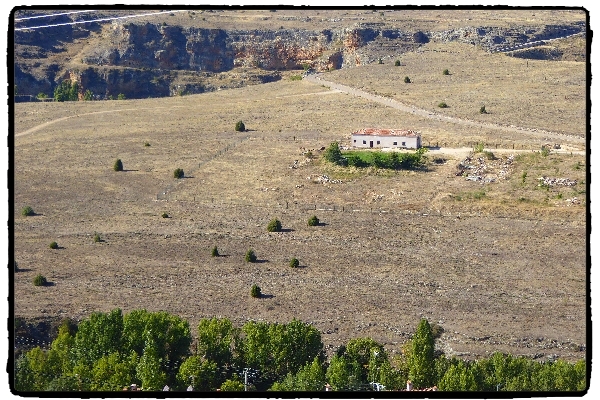 It was just getting light as I arrived at the car park of the nature reserve, lots of Northern Wheatears were dashing about and a small group of Thekla Larks fed nearby by, they issued their gentle calls as they moved through the rocky scrub. Carrion Crows were raiding the litter bins in the car parks and  a Shrike species flew off from a bush as I began a short walk.

Because I was running late my walk was very short and all I added to the my morning list was Griffon Vulture, Great Tit and Raven. My journey back was much quicker as I discovered the correct route and so I had more time now than I anticipated. A mound of farmyard debris dumped into a field attracted a large mixed flock of starlings, a couple of Carrion Crows and half a dozen Azure-winged Magpies. I spent some time trying to photograph them, digi-scoping, hand held without a tripod, results? Naff!

I had to get back for 9am breakfast so that we could depart before 10am, we had to catch a 3pm ferry from Santander. A Black Redstart sang from the roof tops below me as I took my last look from our balcony at the hotel.

We arrived at the ferry terminal in good time, in fact the ferry departed some 45 minutes late. A 3 hour sea-watch produced very little despot the very favourable weather conditions, flat calm sea, very little wind with some cloud cover. A few Pilot Whales, a pod of some 20-30 Common Dolphins and several sightings of ‘blows’ from very distant whales. 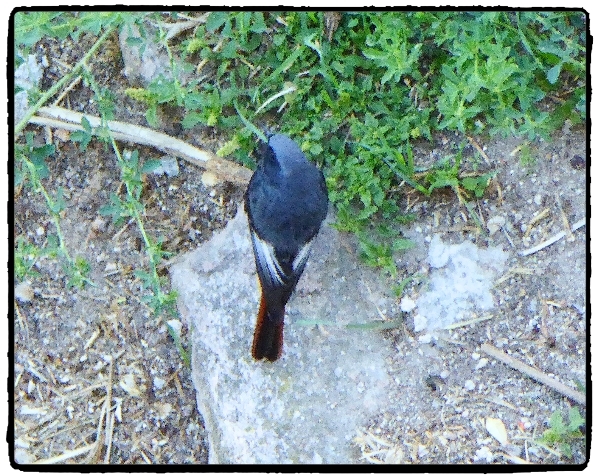 A single Gannet, likewise, Cory’s Shearwater and a small ‘flock’ of Five Pomerine Skua’s was the best of the bird watching.

Very little seen this morning as we rounded the north-western tip of France and entered the English Channel. A few Northern Gannets was all a short sea-watch produced. The sea remained calm, but cloud and light rain started the day off but the sky cleared and it warmed up.