Breakfast was served at 6am and we were on the road by 7, whilst loading up into the Bedford Truck we saw a Least Nighthawk feeding high up above us.  We drove to the main road heading for a well-known track to the nest site of the Harpy Eagle in the hope of seeing one. We also planned to bird along the main road before walking into the forest. This was a great idea, Gary led us and soon we were watching many new species. Grey-winged Trumpeters and Black Carrasows were seen on the track and two Woodpeckers were found high in the trees, one of them was an absolute stunner, the Cream-coloured Woodpecker, wow! Other new species were Cayenne Jay, Grey Antbird, we also had views of Yellow- bellied Elaenia, Helmeted Pygmy-Tyrant, Streaked  Flycatcher and Black-tailed Tityra. 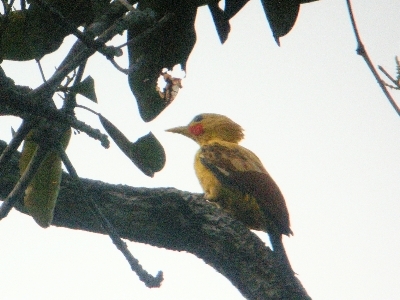 The Harpy Eagle trail was superb, we were led straight to a roosting Long-tailed Potoo, what a lovely find, a bird both cryptically coloured and perfectly shaped to disguise itself whilst sitting out in the open sitting on the top of a broken tree trunk. As we got deeper  into the forest our progress was halted by many sightings; Great and Little Tinamou were seen both walking and in flight, whilst a Red-necked Woodpecker delighted the group. Warbling Antbird proved a teaser before we all got to see it but a male Crimson Fruitcrow sat out in the bright sunshine giving us all fantastic views. At the Harpy Eagle nest we were disappointed that after a wait of an hour or so we had no sighting but we were entertained by a noisy pair of scarlet Macaws at their nest hole. 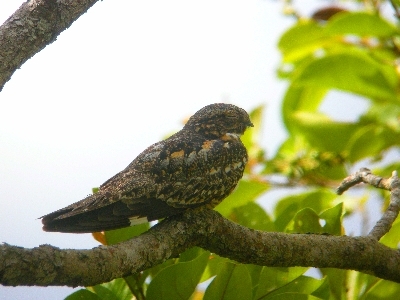 The return journey was a little quicker but we still stopped several times, a White-throated Manikin showed well for us whilst a couple of Capuchinbirds proved more difficult to see by all of us. 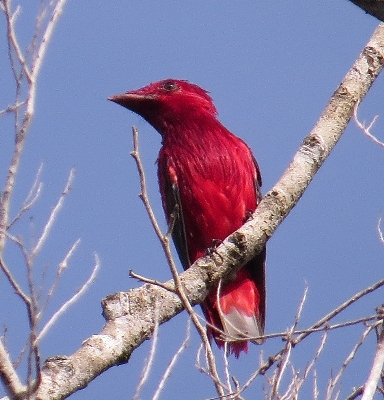 We were back at Surama camp at lunchtime and after a short siesta we set off for the 3.5km walk down to Hammock Camp which is situated on the banks of the Burra Burra river. The luggage went ahead of us and our walk began with a sighting of a roosting Lesser Nighthawk, lovely plumage on this species. Our walk led us through open savannah and then into a section of primary forest before we emerged at the camp clearing. A number of species were found along the way but not a lot to write about. A Black-tailed Trogan, White-sided Antwren and we had an entertaining 30 minutes watching a troop of Wedge-capped Capuchin Monkeys.

At the camp we birded the open compound and listed some nice species; Red-fan Parrot, Blue-throated Piping-Guan,  Wedge-billed and Strong-billed Woodcreepers, Streaked Flycatcher and Cayenne Jay to name but a few. Then we settled into our hammock camp and tried out the hammocks before eating dinner under torch-light and then retiring early to ‘hammock’, everyone was in ‘bed’ by 8pm!