Transfer from ROCKVIEW LODGE TO KARANAMBU LODGE via road and river, this combination of transportation gave us the opportunity to see many bird species and possibly the GIANT OTTER.............

It was sad to leave Rockview we had had such a wonderful, relaxing time there, everyone enjoyed the food the lovely gardens, the swimming pool and the wildlife, Colin the owner is one of those rare characters that you meet one or twice in a life-time. 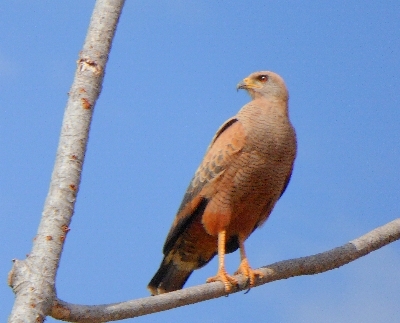 We set off at 7am in the Bedford Truck heading for Ginep Landing where we were due to meet our boats for the trip upriver to Karanambu. We hadn’t gone far when we stopped to look at a few species, Luke pointed out the Gray Seedeater to those that missed it the other day. During that stop we also found; White-naped Xenopsaris which gave much better views than during our first encounter. Red-breasted Blackbird, Fork-tailed and Vermillion Flycatchers, Savanna Hawk were also found nearby. 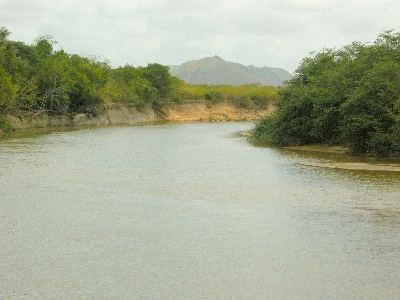 THE RUPUNUNI RIVER NEAR KARANAMBU LODGE

Several more stops were made to look at perched raptors or flocks of seedeaters, we found Roadside Hawk, Plumbeous Kite, Great Black Hawk-Eagle and a group of Red Howler Monkeys before we stopped to look at a Great Horned Owl which sat perched in a tree over-hanging the road.

Our main stop was at a large road-side pool where we spent nearly an hour watching from the vantage point of the truck. A Great White Egret fed alone and was used as a reference point for directions to other birds, this method quickly got us a nice little list: Southern Lapwing, both Pied and White-headed Water-Tyrants, Yellow-chinned Spinetail, Plain-breasted and Common Ground-Doves. A Great Black-Hawk flew down into the grass margin of the pond and pounced onto a small snake, it was the only snake we had seen on the trip and now it was dead! A small falcon landed on a bush at the back of the pool and was identified by Luke as a juvenile Aplomado Falcon. 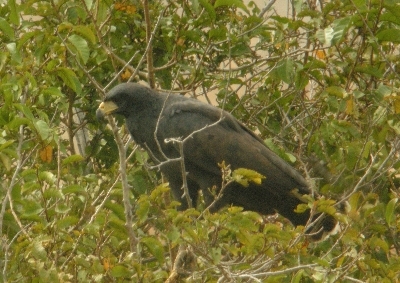 Our road journey was complete when we arrived at Ginep landing, we quickly transferred to our boats and set off to finish the journey to Karanambu. It took nearly 3 hours to get there as we made plenty of short stops and on many occasions we had to slow down so that the boatman could navigate some tricky shallow places, the river was well down on last year because of the lack of rain in the wet season.

It was a joyful and relaxing trip with lots to see, herons and egrets, storks (including a pair of Jabiru at their huge nest), kingfishers were also prevalent in our sightings we saw Ringed, Amazon and Green many times. Ospreys were common sightings as were Neotropic Cormorants, Anhingas and Southern Lapwing.

We never saw Giant Otter but Black Caiman was a regular feature on the sand-bars and quite often we would see Vultures and Hawks fly over the river.

We got to Karanambu in time for a late lunch, Salvador, the joint manager, met us at the jetty and escorted us into ‘camp’ where we were greeted by Andrea, Salvador’s wife and the other half of the management team. Birds were calling and zooming around the cabins as we checked in and got ready for dinner.

Diane McTurk, the famous founder of the Giant River Otter sanctuary at Karanambu joined us for pre-lunch drinks and sat with us at lunch, many questions were fired at her during lunch, she is getting very frail now but still insists on helping her latest Otter orphan to reach maturity and preparing it for release into the wild.

After lunch we walked around the compound logging all the local birds such as; Yellow-rumped Cacique, Crested Oropendola, Brown-throated Parakeets, Yellow-headed Parrots, Crested and Yellow-headed Caracaras, Red-capped Cardinals and a host of other species. 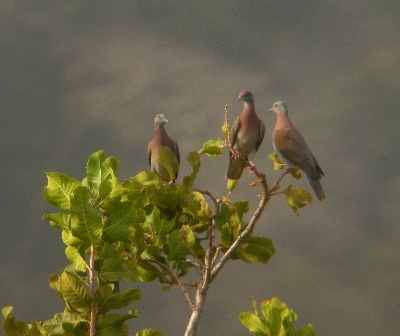 At 4pm we took another boat trip up to a local lake which stretches for miles along a narrow cutting, last year this trip was truly magical, perfect weather and hundreds of bird sightings. This year it was windy, dull and overcast and it rained! Somehow the group managed to enjoy it, we ate home-made biscuits and drank rum-punch once the rain had stopped. We did find Grey-necked Wood Rail, Striated Heron, Roseate Spoonbill, Jabiru, American Pygmy Kingfisher and as it got dark many Band-tailed Nighthawks hawked insects over the water. The return journey in the dark was exciting as our torch-lights picked out many pairs of Caiman eyes reflecting a reddish glow from the water.

We had a superb dinner with rum-punch at 8pm, an early night was had by all, it had been another long day and busy day.