An exciting day out on the savannah, although sightings were not as easy as we expected them to be.......

It was still dark when we assembled for coffee at 5:30am.in preparation for our journey onto the savannah, a full moon was disappearing  and a cloudless sky began to lighten as we set off in two jeeps for our search  for the GIANT ANTEATER.  The expanse of the  savannah soon became apparent when we topped a hillside and could see for miles in all directions, from that moment on we knew our search was going to be very difficult. 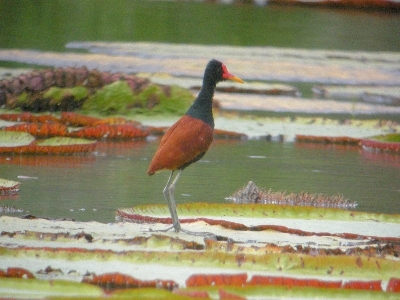 It proved to be the case, we spent an hour scouring the savannah without a sign of an anteater so we decided to pull over to a dam and scan the lake and marshes behind it. A South American Snipe flew up from the marsh as we approached and landed not too far away, we listed several Heron and Egret species that were dotted about in the distance together with Limpkin and a couple of Jabiru. 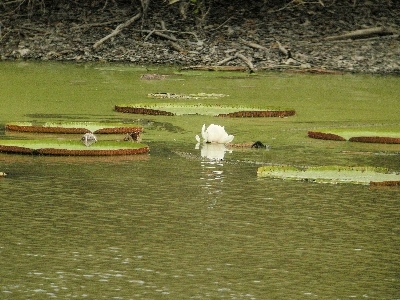 We moved further around the shore of the lake to gain a better view and by doing so we found more species, a couple of Roseate Spoonbills fed with Snowy and Great Egrets and just to the left of them we found a Pinnated Bittern, it was distant but in the clear morning light it was identifiable in the scope. 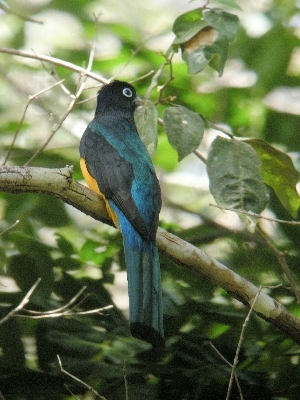 Our search for the anteater continued, during in the next 30 minutes we listed more bird species, a White-tailed Hawk sat on top of a bush, several Grassland Finches were seen, also Southern Lapwing, Eastern Meadowlark and Plumbeous Seedeater. Time was passing quickly and the chances of seeing an anteater reduced by the minute, finally we decided it was too late and we set off in convoy back towards camp. 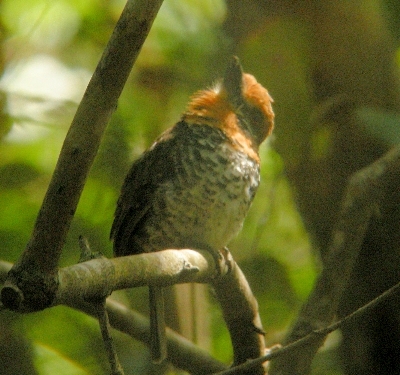 After about 5 minutes into the homeward journey the jeep in front suddenly stopped and everyone jumped out, they were pointing to the right and partially hidden in the bushes was a GIANT ANTEATER, at last we had found one. This magnificent beast walked towards us and passed us by without even a sniff, it walked within a meter of one lucky person. We watched it until it disappeared over a rise, a fantastic sight. 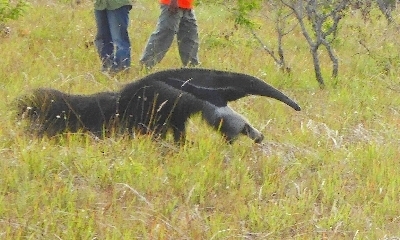 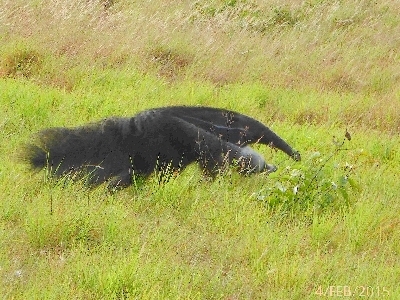 Breakfast was over by 9 so we set off for a forest walk where ‘Ant’ birds were the order of the day, in one small area we saw the beautiful White-browed Antbird and this was quickly followed by a sighting of the White-bellied Antbird, this one also showed extremely well, but the Cinereous Antshrike was our best sighting.

A little further along the track we found White-tailed Trogan and a lovely Spotted Puffbird, a pair of Black-crested Antshrikes were very showy and we had glimpses of Northern Slaty-Antshrike.

For the next couple of hours we had a great time, we visited 3 separate ponds and each one was progressively better than the previous, the final pool gave us great delight when we found a family party of Giant Otters. We watched them catching and eating fish whilst Great White Egrets stood and watched. The pool was covered by Giant Amazonian Lillies and many Wattled Jacanas ‘trotted’ over them, we also saw a couple of Purple Gallnules and had sightings of several kingfishers. The scenery and the wildlife we had seen this morning was truly memorable, we had had special moments with some amazing creatures, we returned to the compound for lunch. 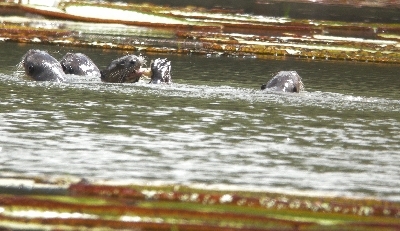 Our afternoon excursion by another river cruise, this time the weather was perfect, clear sky, no wind, simply lovely. The birds seen were a repeat of yesterday’s sightings but all seemed so much better without the rain. The nighthawks also performed well and the Caiman were just as menacing.

Dinner was a lovely affair again with plenty of mirth at the table in the presence of Diane McTurk, Salvador and Andrea, they are great hosts, it was a very nice evening, I suppose the rum-punch helped a lot.