An exciting last day with a mixture of fortune, a diversity of habitats and a nice selection of species to finish off with..................

Our last day’s birding had arrived and yes we were up at 5am, meeting for coffee at 5:30am and on a boat by 6am. This was an exciting trip along the river to try to find the beautiful Crimson Topaz  hummingbird at a ‘lek’, the morning weather was just perfect, clear sky, no wind and a lovely temperature. We set off upriver until Luke called to the boatman to stop, he had heard the Point-tailed Palmcreeper and within a few minutes we were watching one. This is a very good find, a species with a very limited range, so we were very pleased but it had delayed us from seeing our main target species. We quickly went further up the river and almost immediately we saw a distant male Crimson Topaz, so with great anticipation and full of hope we ventured further. 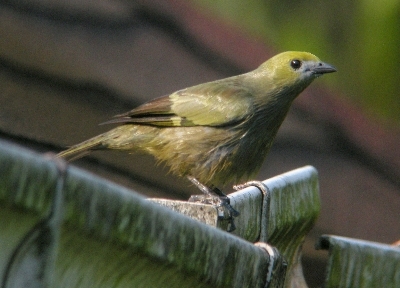 However it was not be, we spent an hour searching for another one but in the end we had to settle for a perched female, not so colourful as the male but we could easily see her ‘white socks’. A Black-throated Antbird gave us the run-a-round, the bird came within a couple of meters of the boat, we could see the grass moving but not one of the 12 pairs of eyes could see the actual bird!

We gave up our search after an hour or so and set off back down river to the lodge and breakfast, along the way we found Masked Yellowthroat and saw a number of other species that we regularly see. Breakfast was served at 8:30am. 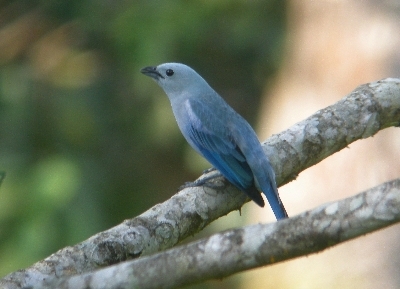 Likewise -  the BLUE AND GRAY TANAGER

It was 9:30am when we set off for our forest walk, another frustrating hour was spent as we walked the trails, many birds were calling but few showed. We did find White-crowned Manikin, White-tailed Trogan and not else. Then after another half an hour we found a feeding flock of Woodcreepers, Antwrens and Flycatchers. We managed to sort out a few species but it was hard to see them in the canopy. We saw Wedge-billed, Buff-throated and Streak-headed Woodcreepers and Plain-winged Antwren. A little further along the track we bumped into even more birds, this flock held Dusky Antbirds, Black-chinned Antbirds, Brown-bellied Antbird and Long-winged Antwren. 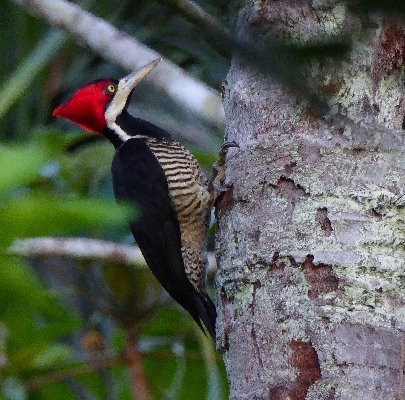 A few more sightings finished off this morning’s birding session, we found both McConnell’s and Whiskered Flycatchers and we had good views of Golden-capped Manikin.

Our last, long-lunch finished at 3pm as we met up for our final birding excursion of the tour, the group voted for another boat trip over another forest walk, so we set off up river for a repeat of this morning’s trip. It was very pleasant, a lovely afternoon sun gave excellent light for viewing. We had another frustrating time tracking down tiny shapes in the river-side scrub and eventually we identified Coraya Wren and finally a Black-chinned Antbird. 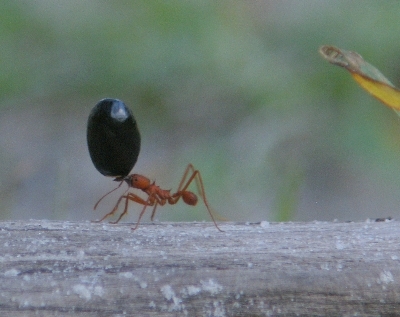 maybe the strongest ant in the world?

There was no sign of the Crimson Topaz but we did find White-throated Kingbird and we all had excellent views of Masked Yellowthroat and Striated Heron, in fact these were our last two birds to be listed for the day. 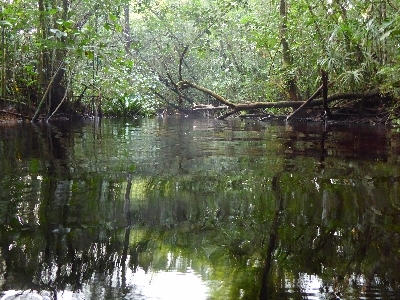 picture from our river trip this afternoon

The birding part of the tour was over, we had seen 345 species, not quite reaching our target but we were well pleased with what we had seen. I have had some great feedback comments from all the clients and they collectively thought that the tour was fantastic and most of them said it was the “best tour that they had been on”.

Dinner was taken on the sandy beach at Arrowpoint around a huge bonfire, lovely ambiance, super food and a romantic moonlit, starry night for the couples.