A lovely river trip followed by a long hike up to Turtle Mountain produced some excellent birding and magnificent views........

It was raining this morning, only light showers but it was wet. The locals say that Howler Monkeys are more vociferous before rain – it was certainly true today, they began at 4:30am! 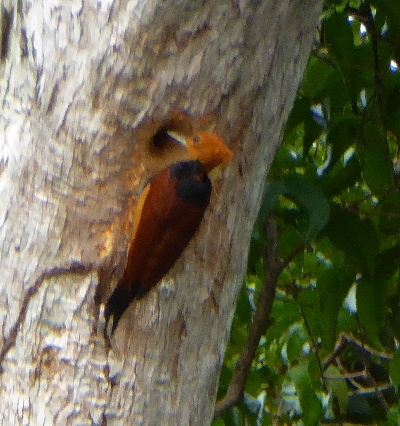 We assembled at the breakfast table at 6am. and then took to two boats for our river trip to the Turtle Mountain trail. The boat trip was fantastic we saw a lot of species, the sky cleared the river was like a mill-pond and the light was excellent. Bird sightings came thick and fast many species sat up on high perches whilst others were low near the water or on rocky outcrops. Cocoi Heron and the very beautiful Capped Heron waded near the shore, a Large-billed Tern was a nice find as was Black-collared Swallows.

We saw 3 species of Kingfisher, the large Ringed Kingfisher caught a fish and was dealing with it in the usual manner whist the smaller Amazon and Green Kingfisher sat on low perches waiting for their fishy-breakfast to show. We had superb views of a female Ringed Woodpecker as it sat motionless next to a partially excavated hole. Toucans, Aracaris, Puff birds and Hawks sat on high perches, our skilled boatman was able to spot some of these whilst at the same time steer the boat into favourable positions to view the find. Some nice raptor sighting included Black Hawk-Eagle, Roadside Hawk, Grey-lined Hawk, Osprey, Lesser Yellow-headed Vulture and the elegant Swallowtail Kite.

Normally the boat trip lasts about 20 minutes, it took us 2 hours to finally reach the landing stage where just before we alighted we spotted our first Trogan, the White-tailed variety. We then walked through the rain forest to an open glade where a hammock-camp has been built, this open area gave us the opportunity to view the surrounding tree tops where we found several nice species. One section of dead twigs found high up in the canopy held four species: Swallow-tailed Puffbird, Golden Sided Euphonia, Green Honeycreeper and Blue Dacnis, we also found Ruddy Pigeon and both Banded and Grey-rumped Swifts. 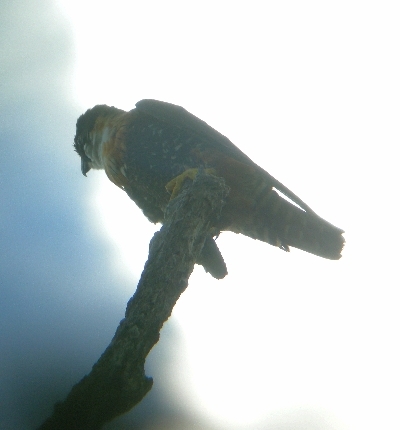 The long trail up to the summit, I say summit but it only 384 meters (approx.. 1200 ft), took us through some pristine primary forest, ancient trees and vines which have existed, unchanged,j for hundreds of years. The landscape was relatively flat for a couple of kilometers then it started to rise until we were scrambling up steep rocky slopes. We stopped many times to look for birds, following their calls and movements, but overall it was a little disappointing. We saw White-sided Antwren, Violaceous Trogan, Yellow-Green Grosbeak, Purple Honeycreeeper, Golden-headed Manikin and not much else.

At the summit we enjoyed the magnificent view of the forest and the river and we were treated to a lovely display by the Orange-breasted Falcon, it circled above us constantly calling before perching very close, giving us lovely views.

The walk back didn’t produced anything new and it took a quarter of the time of the outward journey, the boat trip ditto. We were back around 2pm, the round trip walk was about 8km so we were all tired. After lunch we relaxed until 4:30pm when some of us went for a walk along the approach to the lodge. Again it was quiet, we added Yellow-throated Woodpecker, White-capped Manikin and Spix’s Guan to our list which was now approaching 150. 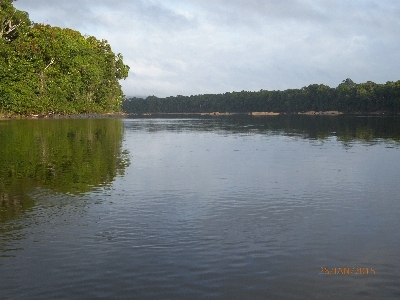 Dinner was taken at 7pm and everyone was in bed by 9!