Our transfer from Iwokrama to Atta Lodge was highlighted with sightings of some excellent species...........Mori Marsh produced BLACK MANIKIN

IWOKRAMA – ATTA LODGE TRANSFER
Breakfast was taken at 6am and we were all packed ready for our transfer to Atta Lodge by 6:45, we had a few minutes birding in the lodge grounds before we boarded our Toyota Landcruisers when we list quite a few species: Red-capped Cardinal is always lovely to see and Toucans are a great crowd pleaser, we saw Red-billed and Channel-billed as well as Green Aracari. 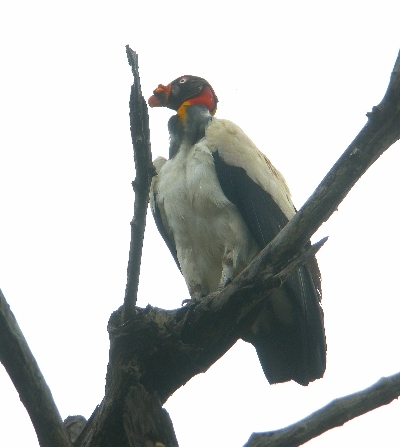 We set as it began to rain, it was a short shower and turned out to be the weather pattern throughout the day, some showers were quite heavy. As usual on these road transfers we made many unscheduled stops when perched birds were seen or something sat on the road ahead. We saw three Black Carrasows crossing the road, a King Vulture perched nicely as well as Plumbeous Kite, Black-necked Toucans, Rufous-tufted Elania, Buff-breasted Wren and so many more. But most often the journey was punctuated with stops to look at Parrots, we had a  great time looking at Blue-headed, Orange-winged, Black-headed and Red-necked, but the tiny Red-shouldered Macaw took some beating until a Guianan Toucanet turned up, what a stunner. We also listed Red-legged and Green Honeycreepers, Blue and Black-faced Dacnis as well as several tanagers. 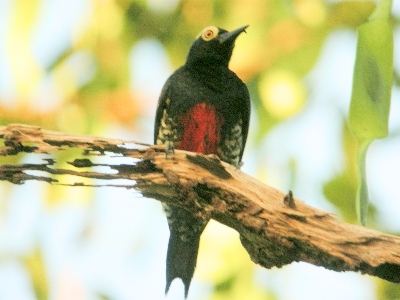 Our only scheduled stop was at Mori Marsh, which is not really a marsh but secondary woodland-scrub that floods annually. It was dry enough for us walk one of the trails and before long we came across our target species the BLACK MANIKIN, everyone had some view of this elusive little black-gem. Two other species of note were heard but not seen and they were; White-plumed Antwren and Red and Black Grosbeak.

Our arrival at Atta lodge was around 11:30am we were treated to tea/coffee and cake on arrival then after a short settling in period we had lunch. A siesta came next during which some of sat outside and scanned the surrounding tree-tops, our efforts were rewarded with a couple of fantastic finds. First we saw a POMPADOUR COTINGA and then a little later a CRIMSOM FRUITCROW (a male-check it out in the field guides) perched for a very short while. A little later a pair of them perched in front of us giving great views.

For the rest of the afternoon we walked to the famous CANOPY WALKWAY and along the way we waited patiently for a Ferruginous-backed Antbird, after a while and a lot of patience from Luke we all saw the bird well. The canopy was fantastic, talk about a bird's-eye view, we were up there in the canopy with them. We spent a good two hour there and waited for it to get dark in the hope of seeing a special bird. But before that we had a great time finding aeveral new species. Dusky Purpletoft showed well, as did Spangled Cotinga, Pompadour Cotinga, Yellow-crested and Waved Woodpecker, also brightly coloured honeycreepers and Dacnis.

Many sightings were made of Parrots and noisy Macaws, also Oropendolas and Toucans but as it dark then the bats took over, we had several whizzing around at head-height. We waited quietly for a White-winged Potoo it answered a whislting call made by John the resident guide at Atta. We waited and waited finally the bird made brief fly-pass, but only a lucky few saw it. The rest of us had to be content with a beautiful seeting sun and dozens of friut-bats.

Our walk back to camp was a little tricky in the dark, the hand-rails provided were not used much as the thought of putting one's hand on a Bullet Ant, Scorpion, Tarantula or other creepy crawly was a bit off-putting. However, we all made it back in time for dinner with no incidents!