We spent a full day out birding on the island of Trinidad, the SCARLET IBIS was our most wanted bird, it didn't take long before we saw our first one. Many other species were seen during our day out as we clocked up nearly 80 species.....

Our day started as it did yesterday, the Pygmy Owl woke me up again and I met my three companions a little later on the veranda. We decided to walk the ‘Discovery’ track as soon as it got light hoping for a view of the Golden-headed Manikin, alas we never saw one. We did see many of the regular species and added Little Tinamou and Rufous-crowned Motmot to our ‘heard only’ list. 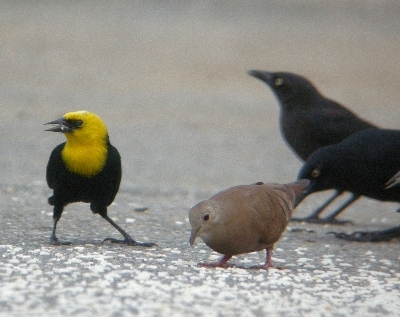 After our walked we had time before breakfast to explore the garden area around the front of the buildings. We added House Wren and Barred Antshrike to our list, the Antshrike is a stunning bird we saw both male and female in short bursts. We also got better views of Band-rumped Swift, a Gray-headed Kite was new and showed very well just before the bell went for breakfast at 7:30am.

By 8:30am we had finished breakfast, packed our bags, checked out of the lodge and met up with Ali, our guide for the day. Ali drove us down to the coast where we spent the rest of the day birding in several places where we visited, mangrove swamps, mudflats, rice fields, rivers and lakes. We had some terrific sightings including the must-see Scarlet Ibis.

Our first venue was Caroni Nature Reserve after stopping a couple of times to view perched birds such as Hook-billed Kite, Black Vulture, Yellow-headed Caracara, Ruddy Ground-Dove and lots of Carib Grackles. At Caroni we logged Northern Waterthrush, Grey-breasted Martin, White-winged Swallow and we had brief views of Scarlet Ibis deep in the mangrove swamp. 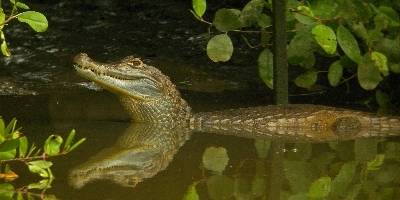 From there we drove further west to Felicity where we stood on a raised bank to view dis-used rice fields. In a couple of pools we listed, Blue-winged Teal, Great White, Snowy and Cattle Egrets as well as Tricoloured and Little Blue Herons. A Yellow-hooded Blackbird was stunning as was a White-headed Marsh-Tyrant. A group of Carib Grackles were joined by Smooth-billed Anis, Greater Anis and more Yellow-hooded Blackbirds. A Spectacled Caiman lay nwar the muddy bank of a feeder river and as we watched it a Clapper Rail called and a Red-capped Cardinal made the briefest of appearances.  Several large flocks of Snowy Egrets flew over, as did a Common Black Hawk and a small number of Scarlet Ibis.

We made two or three stops along the coast at Brickfield to search the mudflats for feeding Ibis, we found a few distance ones and up to 10 Ospreys. At least 20 new species were added to our list during our visit to these extensive mudflats, thousands of Laughing Gulls were joined by Brown Pelicans, a few Royal Terns, L B B Gulls and a selection of waders, the best of which were: Willet, Lesser Yellowlegs, Semi-palmated Plover, Western Sandpiper, Southern Lapwing and later we found Yellow-crowned Night-Heron. Again we saw Scarlet Ibis feeding in the mangrove swamp where we also found 3 more Northern Waterthrush and a Spectacled Thrush. 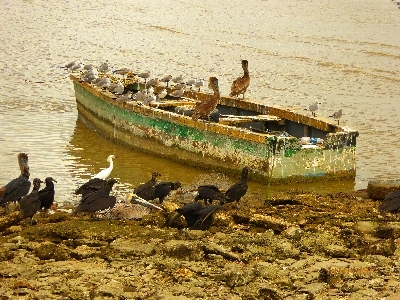 Our last stop was at La Vega, a huge garden centre and fishery with extensive gardens and woodland as well as 3 lakes. The afternoon sunlight was lovely in this beautiful setting. We saw another good selection of species with Wattled Jacana, Purple Gallinule, Ringed Kingfisher, Anhinga, Striated Heron, Yellow Warbler and Yellow Rumped Cacique all new for the list.

It was now approaching 5pm. We had seen nearly 80 species but it was time to go to the airport for our flight to Georgetown, Guyana. We parted company with Ali at the airport terminal and promptly checked in for the flight, the rest of the group had flown in from London and we all met up in the departure lounge. 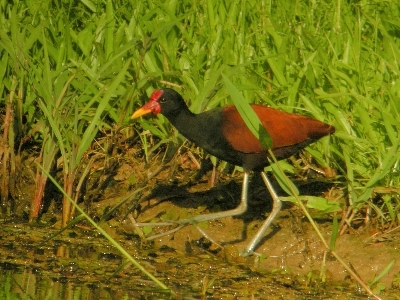 Our group, now 10 strong, landed at Georgetown ahead of schedule, we touched down at 9:30pm and quickly passed through customs to be greeted by Luke, who is to be our guide for the whole trip.

It took about an hour to get to Georgetown from the airport, we checked in and fell into our rooms, straight to bed in preparation for the very early start of our fantastic 15 day tour, tomorrow.