I knew it was going to be a good day when I was woken by a SCOP'S OWL calling right outside of my bedroom window at 4am!.........

TRANSFER – FLIGHT LONDON TO BUDAPEST THEN  BY ROAD TO EGER

This was a trip I put together for the Cheltenham Bird Club after visiting this superb area in March this year.

All twelve of us met up at Gatwick and boarded our afternoon flight to Budapest which departed on time and landed slightly early. We were met by our two Hungarian  drivers who quickly helped us to load into two minibuses for the 140km road-trip to our hotel. The roads were clear with light traffic, but it was dull and overcast and not very warm.

We made a stop midway to stretch our legs, during this break we saw Common Buzzard, Crested Lark, Black Redstart, Goldfinch, Greenfinch, Common Starling and Collared Dove.

We arrived at the hotel around 7pm just as it was getting dark, Scop’s Owls were calling and Common Nightingales were singing in the gardens, I think we are going to like it here!

We met at 6:15am for our first birding excursion of the tour, Roy, an English birding guide living in Hungary collected us with a second driver and after loading into the two buses we drove through the town of Eger to a parkland area on the east side of town.

An oak woodland stretched over the hills which were strewn with chalets, log cabins and Swiss-style cottages, these were the holiday homes of the well-to-do city dwellers from Budapest. The area was deserted right now so we kept to the road and didn’t venture onto any of the park trails.

The whole area was alive with bird song, a crescendo of calls hit us as we left the buses. Thrushes, finches, woodpeckers, flycatchers, warblers, doves, pigeons, tits and redstarts, all of them were heralding a new day in terrific melodic chorus.

It had been raining in the night, everything was dripping wet and it was quite chilly, despite this we had great time as we discovered a wealth of bird life. We watched the nest hole of a Black Woodpecker for a while, we could hear this huge bird but none turned up at the nest. Wood Warblers were trilling from all around us and Collared Flycatchers gave out their long whistling calls, Cuckoos called and Hawfinches ‘ticked’ as they flew overhead.

We soon a nice little list, Roy showed us an active Short-toed Treecreeper’s nest, we had good views of Middle-spotted Woodpecker and had glimpses of Black Woodpecker. We all had an excellent time but it was time to leave and head back for breakfast.

The rest of the morning was spent in and around a small village called Novaj, we parked in the village to look at a White Stork’s nest with two birds in attendance and then we walked a track that led us into farmland, open fields and wooded copses. What a fantastic place, birds were everywhere, we soon had several goodies in the bag. 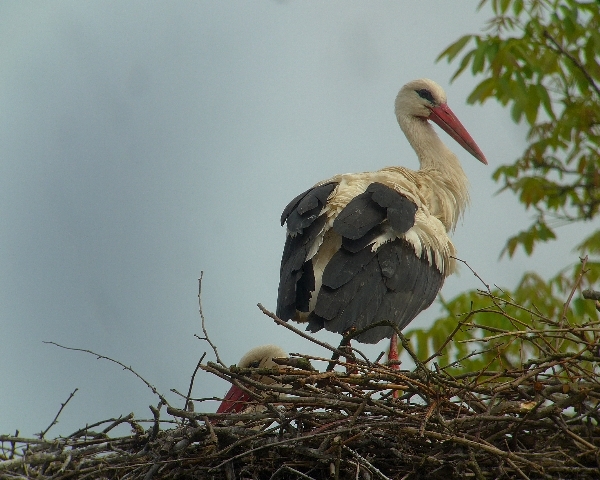 WHITE STORKS on their nest

A Barred Warbler showed extremely well as it sang from various song posts, Red-backed Shrikes were new migrant arrivals and were still pairing off or nest building. Common Cuckoos flew over us and Golden Orioles flitted about in the poplar trees or flew right across the valley to their feeding areas. A Wryneck called from first, a bush and then a fence post, Whitethroat and Lesser Whitethroat sang along the hedgerows, Hoopoes dashed across the fields and both Spotted and Pied Flycatchers made fly-catching sorties from trees in the copse. A Marsh Warbler sand from the hedgerow and was seen by one lucky fellow.

We reluctantly left this terrific place and drove to another small town for lunch and as it was still quite cool we all opted for a bowl of hot Goulash, lovely.

Next we scoured the plains near Heves where Roy took us to an area where we could view an Eastern Imperial Eagle’s nest which had an adult sitting on eggs. We also saw two other of these magnificent birds flying in the area with Common Buzzards and Marsh Harriers that were mobbing the big eagles. In the fields we stopped to watch Skylark, Crested Lark, Whinchat, Yellow Wagtail (flava) and many Marsh Harriers.

The last venue of the day was the large lake at Tisza, whilst making our way there we found Rollers sitting on wires,  an Icterine Warbler sang from a dense hedgerow immediately behind us, we spent 30 minutes waiting for the bird to show but it never did. 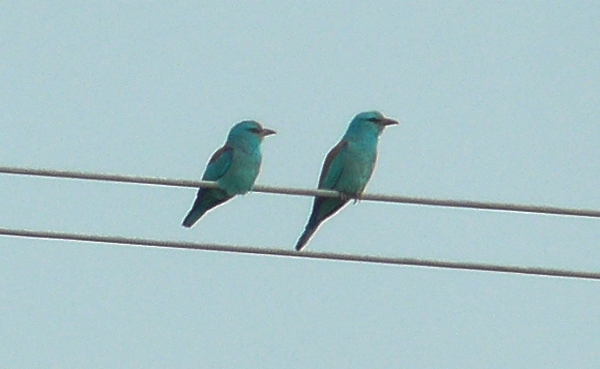 At the lake we had a lovely time ‘scoping’ many species either, on the water, flying over it or in the reeds around it. A pair of Red-necked Grebes were nice to see in their summer plumage and very distant White-winged Terns danced over the water as they fed. 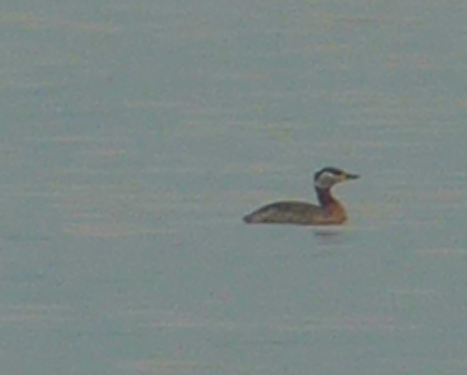 a record shot of a very distant RED-NECKED GREBE

However it was the water margins that gave us our best sighting when we found a Penduline Tit, this super little male sang from the willow bushes before flying to a nearby section of reeds to collect nesting material, we had terrific views of it.

It was time to leave, we had a great list of over 70 species with some memorable sightings, can’t wait for tomorrow’s exciting trip.