At last we hit the Hortobagy and with great results......102 in the bag today

This was the biggy – our most anticipated day out – we were to visit the Hortobagy region which is a national park and covers a huge area in the south-eastern region of the country near the Romanian border.

It consists of a huge flat landscape of alkaline steppe, (known locally as the ‘Puszta’ meaning ‘emptiness’) it is a rich sediment where hundreds of square miles lie in a mixture of cultivated fields, open pools, reed-beds, rough pasture, ditches, dirt tracks and very little woodland. Once out of the small towns you can see for miles in all directions. According to literature up to 152 species of birds breed in this area! 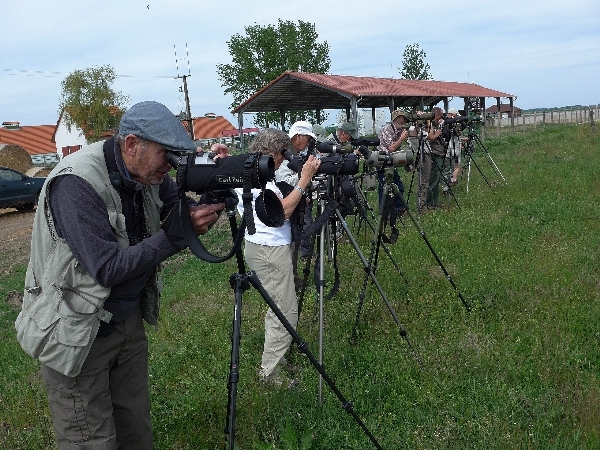 all eyes to the scopes

During our day-long visit we recorded 102 species, Marsh Harriers dominated the skyline, I have never seen so many, but also falcons are well represented, Common Kestrel, Hobby, Red-footed and Saker Falcons. We visited several areas but here are the main sites and our record of the day.

It was about 10am by the time arrived and after passing through the pretty village of Hortobagy we stopped adjacent to a reedy area with some pools at the side of the road. A male Garganey sat on a small island whilst Ferruginous Duck swan nearby. In the surrounding reeds we could hear Savi’s Warbler, Sedge Warbler, Great Reed Warbler and Bluethroat. Two Bluethroats were seen performing their display flights and sitting on the reeds. Other birds recorded here were Yellow Wagtail, Marsh Harrier, Corn Bunting and Rook (very few ‘rookeries’ appear in Hungary). A flock of 15 Common Cranes flew over us and Purple Herons were seen very frequently along the ditches and pools. 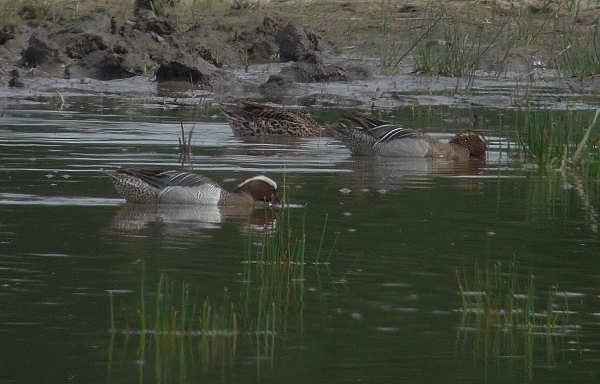 /We drove deeper into the area and arrived at roadside restaurant where we met up with a local ranger of the park, he was to guide for the rest of the day, so after a quick cup of coffee we set off for our tour.

Chondra, our guide, took us to a cultivated area where a series of pylons crossed the fields, he pointed out a perched Saker Falcon, wow what a start, the bird soon flew off but we all got great views of it.

We then drove for nearly an hour to a wetland area called Fodes, it was technically outside the Hortobagy but well worth the visit. We passed a series of reed fringed pools along a track where lots of Great Egrets and Purple Herons fed. The track led us to two much larger, open pools, that were covered in birds. It took us ages to sift through them all, there must have been 30-40 different species there. 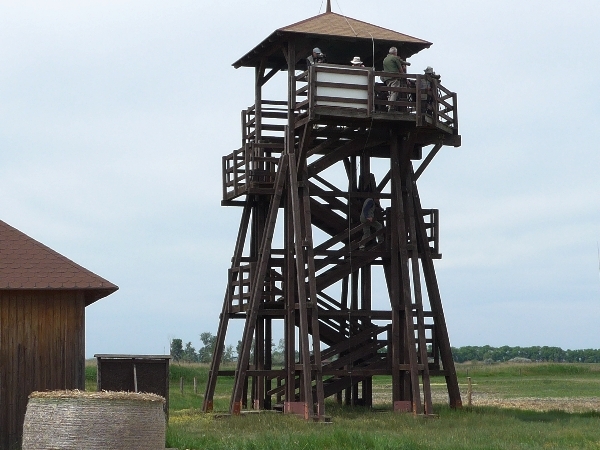 Fromnan elevated tiwer we had a commanding view of the whole area and amassed a considerable list of species.

Several ducks were also present, Eurasian Wigeon, Eurasian Teal, Garaganey, Gadwall, Northern Shoveler, Common Pochard, Ferruginous Duck, Mallard and Common Shelduck. A huge number of Greylag Geese had hordes of goslings and we found a couple of Greater White­-fronted Geese in with them. 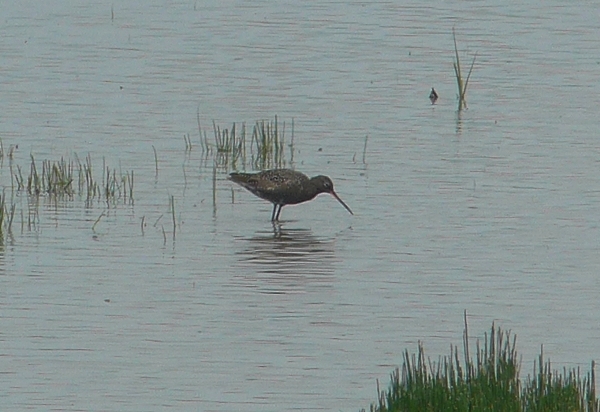 The whole experience was magical we sat in the sunshine to eat our picnic lunch before walking along the track in search of more species. A Eurasian Bittern ‘boomed’ a couple of times and Water Rails ‘screamed’ from the reeds but neither showed, we did however have great views of Bearded Reedling (Tit). A distant Red-footed Falcon was another good sighting but only by a couple of the group.

From Fodes we drove deep into the Hortobagy taking tracks with right angled turns through miles of cultivated, very flat, farmland. We eventually came to a stop near a horse ranch where our guide showed us a pair of Stone Curlews, this rare breeder was a great addition to our list. We also saw Northern wheatear, countless Skylarks, Corn Buntings and a Montagu’s Harrier was seen just as we arrived. 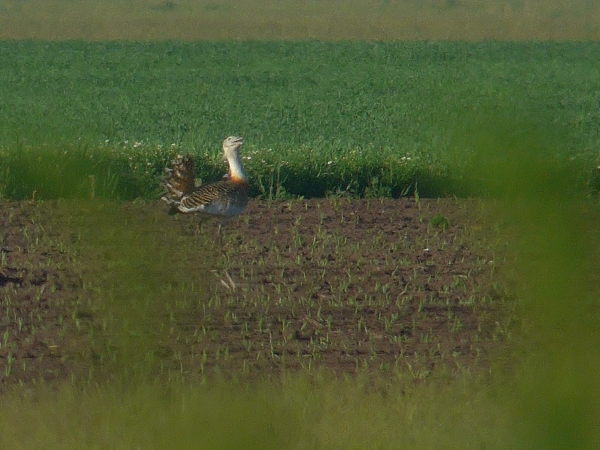 .We had one more bird to look for before we went home, this meant another 30 minute drive over rough tracks which brought to a derelict farm, from there we had a great panoramic view of  the surrounding fields. Then  a GREAT BUSTARD flew in, it circled and landed not too far away and it began displaying to a female bird. Eventually we picked out six of these ‘giants of the plains’ they look like prehistoric relics as they strut around in modern cultivated fields.

We all had great views in superb afternoon sunlight, in the back group we could see a few White Storks and about 50 Common Cranes. It was a great way to finish off a fantastic birding day, we had spent a lot of time travelling from one place to another but we all agreed that it had been well worth it.

We arrived back at the hotel around 7pm so we didn’t eat until 8pm and most of the group retired for night at 9:30.