The official meeting time was 6am but just before that we walked down the lane from the hotel to investigate a Wryneck that was calling loudly. The bird showed really well in a roadside tree and even better when it flew onto a power cable. Whilst watching it we also found a pair of Lesser Whitethroats in the scrub below, a marvellous start to the day 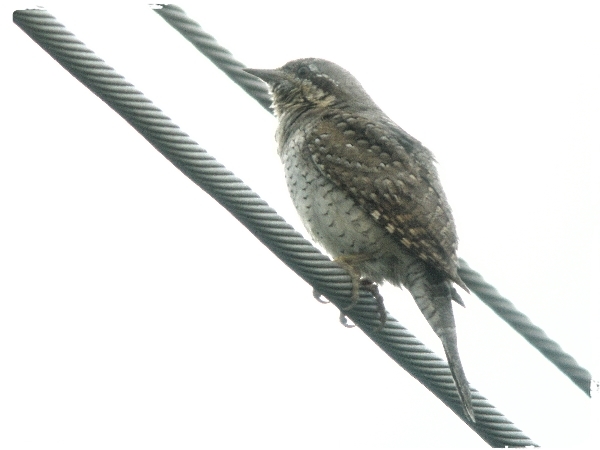 A couple of pictures of the very obliging Wryneck

At 6am we set off to visit a local lake, it wasn't the water that drew us there but the surrounding valley and hillsides which consisted of a mixture of habitats. Reed-beds surrounding the lake, they petered out into scrub them some emerging woodland, the adjacent hillsides contained brambles, small bushes and areas of open grassland, ideal for Locustella species.

Cuckoos seemed to be calling from every bush, Red-backed Shrikes also sang and Great Reed Warblers tried to drown out every other bird! We found our first Grasshopper Warbler (Locustella naevia) within a few minutes but it was distant and it wasn't showing too well, however the second and third sightings were fabulous, we had excellent views. 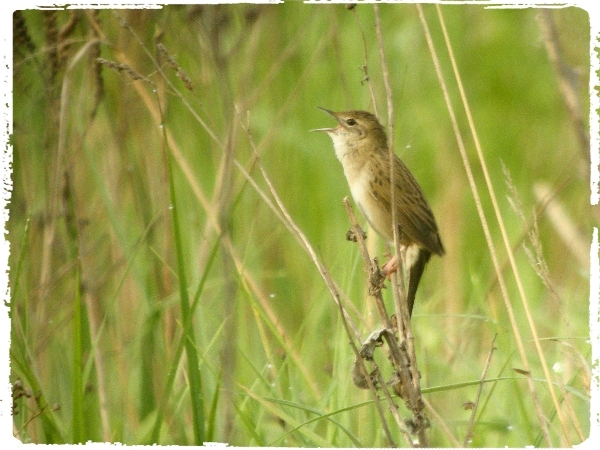 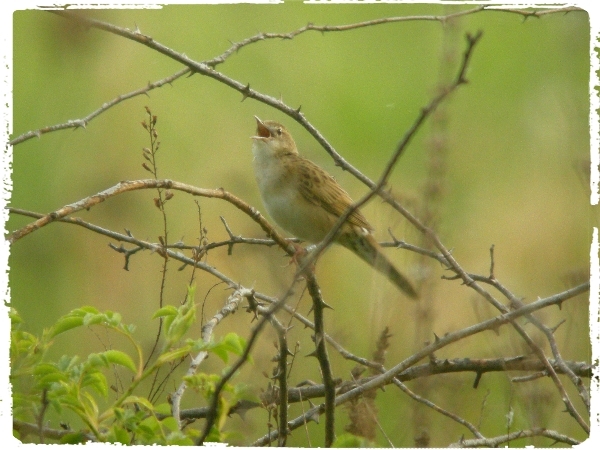 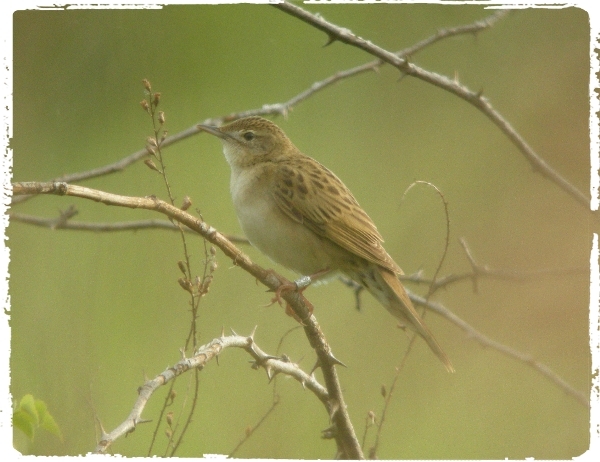 We moved on to the scrub area and heard a Marsh Warbler but failed to see it and the next hour was spent tracking down  RIVER WARBLERS ( Locustella fluviatilis). We heard up to five of these little skulkers as they reeled away in the dense scrub and we did get fleeting views of them until we found one sitting out whilst it sang. It wa truly amazing, I had never seen the bird do this before and what a gape, never seen such a wide gape either! 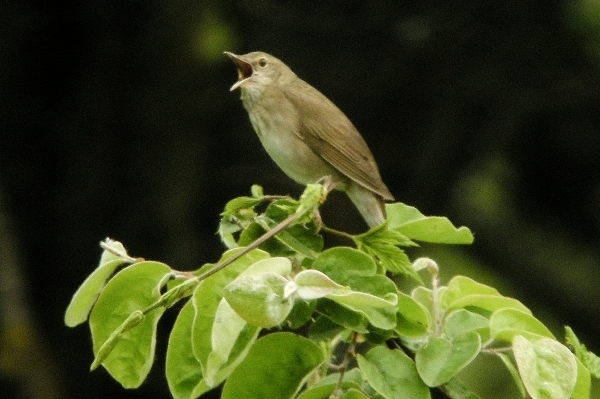 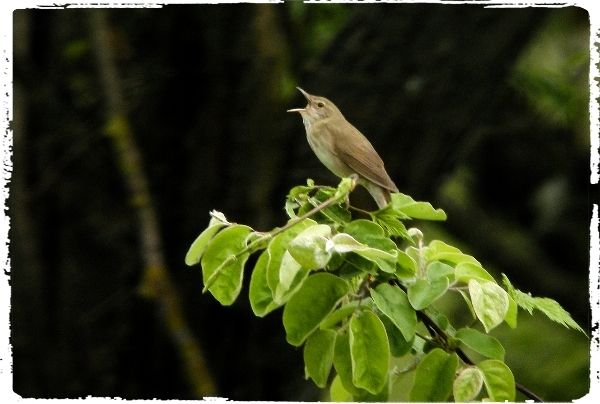 We then spent time watching a lovely male Barred Warbler as it sang from the canopy of small trees, we also saw Hobby, Golden Oriole, Stonechat, more Red-backed Shrikes and Cuckoos.

After breakfast we set for the Polgar Wetlands which consist of a series of large lakes.small 'ponds', ditches, reed-beds and scrub, we spent the rest of the day there. But just before we arrived we made a short detour into some poplar woodlands to search for Icterine Warbler. The bird was very elusive and refused to come down from the canopy so all we got was flewting views. Other birds sennin the area included: Marsh Tit, Long-tailed Tit, Short-toed Treecreeper, Spotted Flycatcher, Great Spotted Woodpecker and several common species. 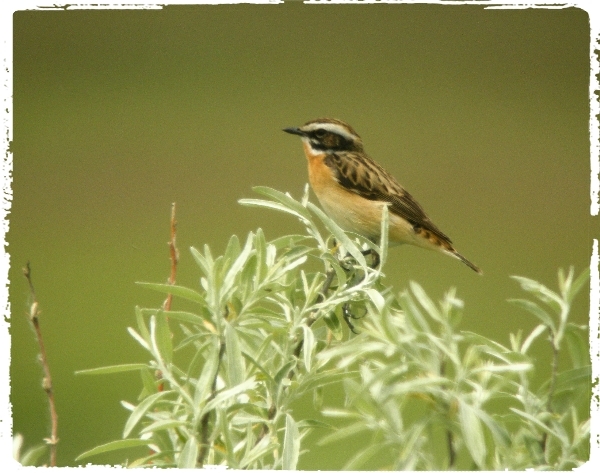 At Polgar we visited two main sites and listed a wonderful array of waders, terns, herons, egrets, warblers and birds of prey. Some of the highlights include: White-tailed Eagles perched on a pylon, Bluethroat on the reeds, Marsh Warbler showing well in the reedy ditches. Also Penduline Tits building a nest but the best sighting for me was of Ruff. The males were in full breeding plumage and were practising there 'lek' display, there was a wonderful array of colour in several male birds as they strutted about displaying their fully extended neck feathers. Many females were around them and were being chased all over the marsh.

We spent all afternoon walking on raised walk-ways netween large reed-beds and open water, Pygmy Cormorants were present in large numbers as were Great White Egrets and all three 'Marsh Terns', Black, Whiskered and White-winged.

Great Bitterns were booming, Night Herons were roosting and the reed-beds were alive with the songs of Reed, Great Reed and Sedge Warblers,one or two of the group were lucky enough to see MOUSTACHED WARBLER, a real 'biggie' here in Hungary. 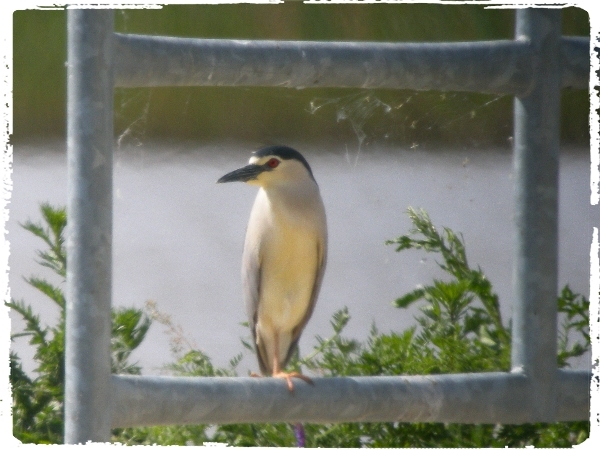 A Night Heron posing in  a picture frame.

Marsh Harries roamed the open fileds and reed-beds, White-tailed Eagles drifted over on-high spreading panic amongst the Greylag Geese (their favourite prey). We listed about a dozen wader species, the Ruff being our best sighting but also Spotted Redshank, Black-tailed Godwit, Dunlin and Curlew Sandpiper sported their summer outfits. Whilst Pied Avocets and Black-winged Stilts were everywhere.

At 5pm we called it a day, it had been pretty tiring in the heat of the day, we had listed 96 species, a great range of birds in some wonderful habitat, all in all a superb day out. River Warbler was voted bird of the day.