My second full-day out with local guide Roy was a bit of a wash out, it was dull and overcast, we had rain and sleet for most of the day but we still saw some good species..............

Bùkk Hill (pronounced 'book' ) National Park consists of  large and extensive oak, beech and Hornbeam forests and are0 home to eight species of woodpecker and four species of eagle. The Ural Owl is also a prized traget species for this area, we saw an owl-shaped bird ghosting through the trees deep in the forest but we didn't get enough on it to say for sure, it could have been a Common Buzzard!

We were after Woodpeckers today, wasentially the White-backed Woodpecker (sub-species - ). We set off in the rain and drove for about 30 minutes to Roy's prime spot for woodpeckers. The sleet came steadily down as we walked the first track, it was cold! The forest was predominently Beech with lots of standing 'dead-wood'  and all fallen trunks were left in place. This is ideal habitat for the White-backed Woodpecker, they search for ants in dead wood by stripping back the bark, they completely strip the trunk of dead or dying trees, we could see a lot of evidence of this. 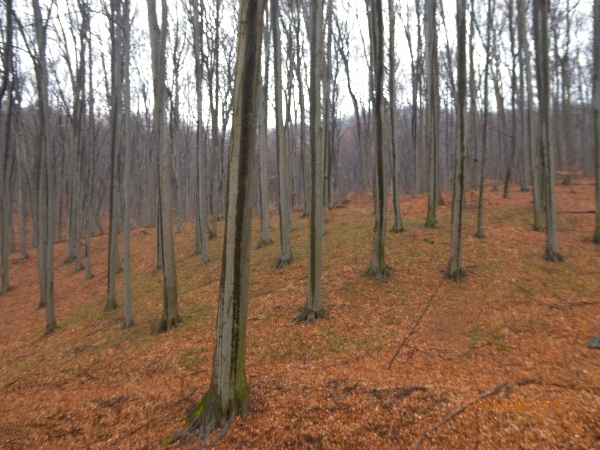 Beech forest - looking desolate at this time of the year 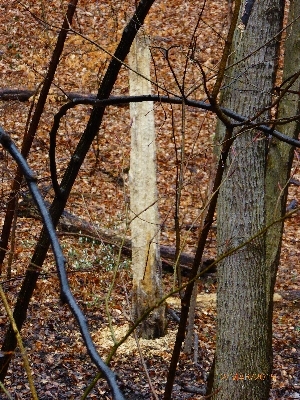 an example of the WHITE-BACKED WOODPECKER'S work!

After about an hour we failed to see a single woodpecker although we could hear a couple of distant Grey-heaed Woodpecker. We did see Eurasian Nuthatch and a Eurasian Treecreeper.

We deeper into this huge national park, uphill and down down dale, then we found a cafe that served hot coffee, how nice. We stayed for a while hoping for a break in the weather, it did brighten a little and the rain eased, this was our cue to leave the warmth of the cafe.

Another area of beech looked promising and after about an hour the rain stopped and as if by magic birds began to appear! Eurasian Nuthatch, Short-toed Treecreeper, Willow Tit, Common Chaffinch, Blue Tit, Great Tit and a couple of Great-spotted Woodpeckers. Then Roy heard the White-backed call......and suddenly there it was, wow a lifer for me!!

Over the next hour we had lots of sightings and if my camera battery had not failed me I would have lots of pictures to show you...but with my spare battery in the wrong jacket I failed to get a single picture.

After a lovely 'goulash' lunch which warmed us up we set off away from the forest to visit a rubbish tip! Gulls were our target, in fact the Baltic Gull (Larus fuscus) to be precise.We saw lots of Black-headed Gulls, Yellow-legged Gulls and Caspian Gulls before we found our prize. It was an adult Baltic Gull in summer plummage, marvellous.

We then search open fields and usual haunts of the Saker Falcon, however the misty wet weather had a lot to do with us not finding one, we saw Rough-legged Buzzard, Common Kestrel and lots of Common Buzzards but no falcon.

The light was already fading and the rain continued so at 3:30pm so we decided to call it day, we got back to the hotel around 4:30pm and I said goodbye to Roy. My short excursion to Hungary was almost over, the birding certainly was.

Tonorrow there will not be a blog unless I see something really good on the way to the airport, I have to leave the hotel at Eger fairly early to carch a midday flight.