WEATHER: Dull and overcast, misty with rain for most of the day

Five of us caught the Scillonian III Ferry for the crossing to St Marys, Isles of Scilly, it wass't  too bad as the sea-state was fairly calm but the visibility was very poor. W\e saw a few birds around the Penzance Quay before we sailed, Rock Pipit, Ruddy Turnstone, Cormorant and Herring Gull come to mind. During the crossing we saw very little, 1 Great Skua, 1 Razorbill, 1 Manx Shearwater and dozens of Gannets.

One interestiung sighting was of a Meadow Pipit which landed on the ship, it settled on people at times which was very amusing, as we approached St Marys we added Shag, Great Black-backed Gull, Barn Swallow and Black-headed Gull to the list. 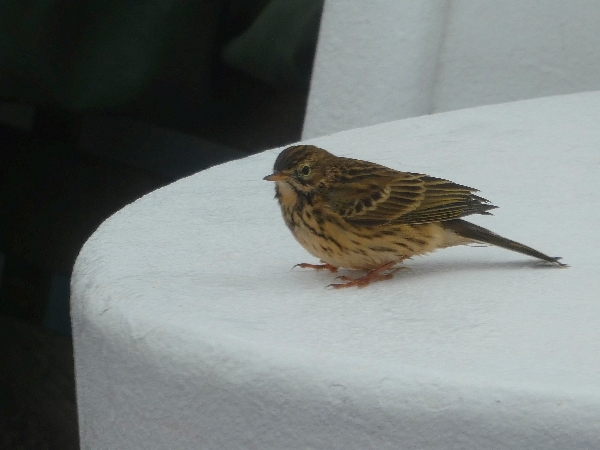 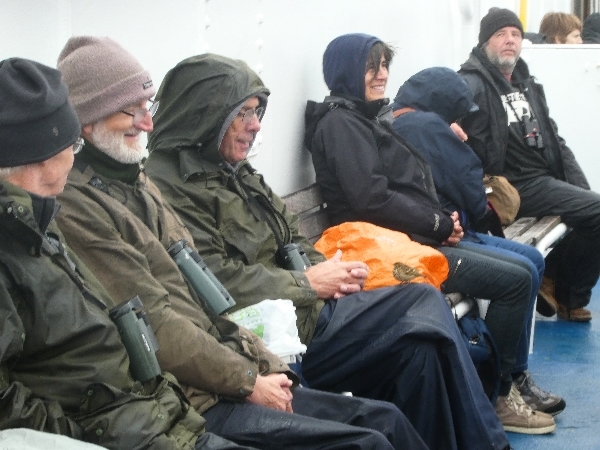 It took a while to settle into our guest house which was a short walk from the quay, we bought lunch and ate at the guest house before setting off on our first birding excursion, in the rain.

Apart from Common Starling, House Sparrow, Carrion Crow and Collared Dove we saw zilch until we got to Carreg Dhu Gardens, then we only added Dunnock, Robin and Great Tit to the list, we were hoping for a Firecrest but we never saw or heard one. We continued along the track which brought us out to Longstone Cafe where a Rustic Bunting had been seen a couple of hours earlier, a few people were looking for it but it had disappeared for now. 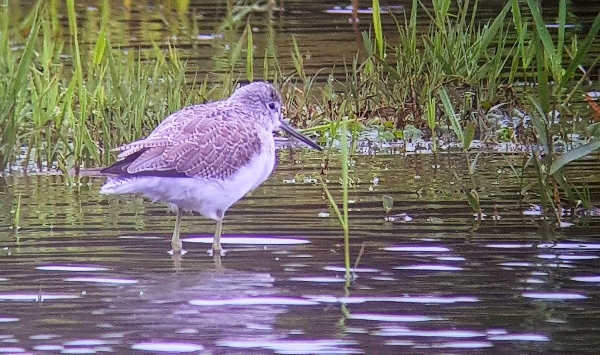 Our path took us through Holy Vale and onto to Higher Moors, we saw nothing much all through the woodland and the marsh scrub. Wood Pigeon and fly over Mallards!!  At Porth Hellick we sat in the Sussex Hide for quite a while, it was dry and saheltered in there. A Common Snipe sat near the hide, four Mallards, a Moorhen and a Common Teal fed on the water. Then the Moorhen climbed onto a distant bank and flushed a second Snipe, this one was much smaller and sat in full view for ages without moving, it was fast asleep.

the beach at Porth Hellick

After a while it did move a little and I confirmed that it was a Jack Snipe, the others were not convinced until a Grey Heron landed nearby some twenty minutes later and flushed the bird into action, we all saw it walking and bobbing about, it was indeed a Jack Snipe. In the meantime six Greenshank landed in the water near the Snipe they sat out preening much to our delight.

We walked to the beach at Porth Hellick and enjoyed views of Linnet, Common Ringed Plover, Curlew, Greenshank, Greenfinch and Greater Black-backed Gulls.

It was now 4:30pm so we headed back the way we came and popped back to Longstone just in case the Bunting had reappeared, it had of course, but it had disappeared again. We heard Firecrest calling at Carreg Dhu but did not see it and we searched the Linnet flocks for the Rustic Bunting because the bird had been feeding with Linnets earlier. We added Goldfinch and Stonechat, Song Thrush to the list and I saw a Sparrowhawk which went on my list.

It had been a very slow start, but the weather did improve as the day wore on, let's hope for some good visibility tomorrow. When we got back to the guest house we found our other four companions had arrived at last, they had been delayed because of the weather and flew in about 6pm instead of 11am! Now we had a full group of nine, we all walked across to the Scillomian Club for dinner which was enjoyed by all.