WEATHER: Dull and overcast with bouts of light rain

Our very last morning had arrived we had a few hours before departure, four of the group were flying around noon so they had less time than the other 5 who needed to be on the quay by 3pm to take the Scillonian boat at 4:30pm.

As always we hoped to go out with a bang and with a couple of ‘MEGAS’ around it was possible!!  We walked to Lower Moors and joined the throngs of birders looking for the YELLOW-BILLED CUCKOO and the Spotted Crake, the cuckoo had been seen earlier but the crake had not.

A brief distraction occurred when a Honey Buzzard call came over the radio, it was heading our way, a quick dash up the road proved very rewarding as a Honey Buzzard flew over us, a smashing bird and an excellent sighting for Scilly in October.

We then concentrated on looking for the cuckoo which eventually showed fairly well, it was pandemonium, crushing, jostling, but generally good natured. I managed to get it in my scope and after showing my clients the bird I had a queue of 20+ people waiting! Using my phone as a guiding tool I showed each person the bird in the picture on the phone then let them see it through the scope, it worked well.

We were well pleased with that and to top it off a Yellow-browed Warbler was flitting around below the cuckoo, two new birds in one scope view!!  I couldn’t get a picture of either bird, far too busy with other people using the scope, the cuckoo moved a couple of times and sat out in full view but I was too slow to get a digi-picture then it flew off for good.

Fantastic, superb, unbelievable, crippling, cracking……….you can tell I was well pleased with that one! A Lifer!!!   Well, no amount of rain and wind was going to upset me now. It was 12 noon, we had to get to town for some of the group to leave which they promptly did. Then news came up of a sighting of the BLUE ROCK THRUSH!! I couldn’t resist that, I was on a roll, unfortunately the rest of the group didn’t have the same enthusiasm, so I went on my own.

I marched up the hill and took the hospital track out to Penninis Head and turned left, my view of Old Town and the Bay was both commanding and panoramic, I could see many birders below me all searching for the thrush. You guessed it, I arrived 5 minutes too late. The bird had disappeared, it was only seen by one observer.

my view of Old Town Bay from Penninis Headland

I walked round to the Lighthouse and bumped into a Wryneck, this lifted my spirits back up to where they were an hour ago, what a lovely bird and showing extremely well. As I walked back along the hospital track I noted a good number of Pipits in the meadows and pig fields. It was now approaching 2pm so I had to go, I couldn’t sift through pipit flocks. 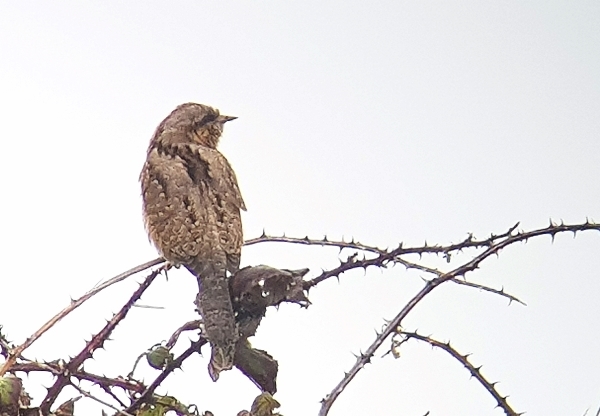 Two pictures of the Wryneck at the lighthouse Penninis 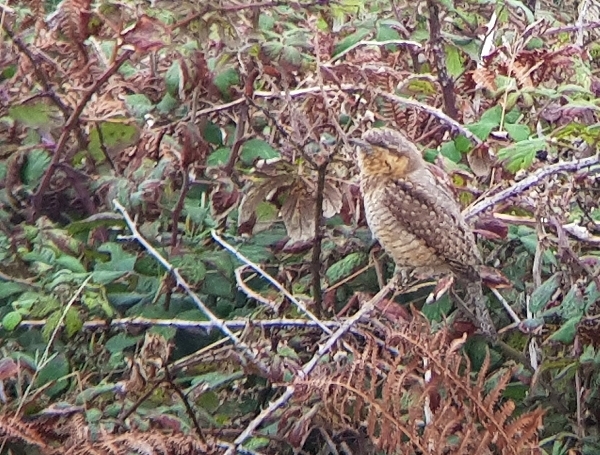 I should have searched through those pipits!!  When I got back to the guest in Hugh Town a message came up of a Red-throated Pipit, showing really well in the Pig Field, dohhhhhh!!!! I never had time to go back, the photos of it broke my heart. What a great bird to finish off the trip with.

The ship left on time, it was a smooth crossing, very poor visibility so not many birds were seen. Great Skua, Manx Shearwaters, Grey Phalarope (3 seen by a few people), Sooty Shearwater (1 seen by a single observer), a few Guillemots and Razorbills, Kittiwakes and dozens of Northern Gannets.

Five of us ate a lovely meal in the Admiral Bembow, Penzance, highly recommended. We said our farewells around 9pm, the trip was finally over.

It had a been a good week not a great week! We had mixed fortunes with both birding and the weather and I guess they are both inextricably connected. As we did last year we picked up one or two goodies each day, we saw Jack Snipe, Lapland Bunting, Red-breasted Flycatcher, Short-toed Lark, Honey Buzzard, Dotterel, Snow Bunting, Yellow-billed Cuckoo, Wryneck, Yellow-browed Warbler, Green-winged Teal, Balearic Shearwater and about 80 other species.

The above lists just show you how good the Isles of Scilly still are and apart from the birding, the tranquil atmosphere and stunning beauty, is a real delight to savour. Come and join me next October for another great adventure.   Bookings now being taken for Sept 30th – October 7th 2020.